How to Travel from Lhasa to Nyingchi

Traveling to Nyingchi from Lhasa is an easy route that has several options for tourists to the Tibetan plateau. While you can take this trip by flight, it is often better to do so by car, traveling overland to the area of Tibet known as the Swiss Alps of Tibet. A region of deep fertile valleys and high snow-capped mountains, filled with dense forests of rhododendron, juniper, and spruce, among other alpine trees, Nyingchi is one of the most beautiful places in Asia, and is much lower in altitude than the rest of the plateau.

Nyingchi Prefecture-Level City lies to the east of Lhasa, in the lower southeastern area of the Tibetan plateau, in the region once known as Kham. A distance of roughly 410 kilometers from the Tibetan capital, Nyingchi is noted for its stunning landscapes, beautiful lush scenery, and alpine views. The high snow-covered mountains of the lower eastern Himalayas run along the entire length of this narrow area of Tibet, providing for the most outstanding views you could ever imagine. Bordered to the west by Lhasa and Shannan, to the north by Nagqu and Chamdo, and to the east by Sichuan Province, Nyingchi’s southern border lies along the border with Arunachal Pradesh, the disputed area of eastern India and the far north of Burma. 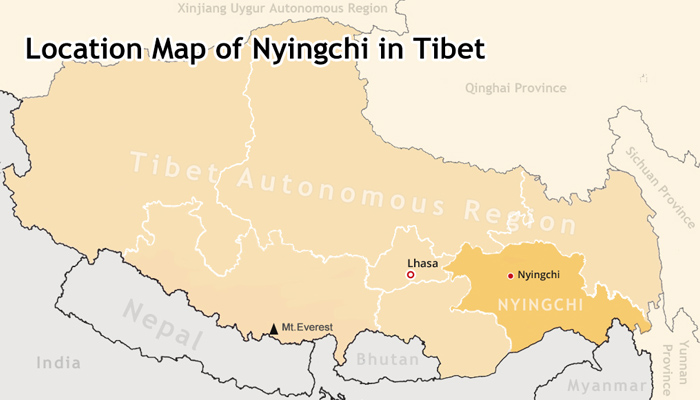 Nyingchi Prefecture-Level City lies to the east of Lhasa.

Lhasa to Nyingchi by Overland – Most Recommended Way

Traveling from Lhasa to Nyingchi overland is the best option for travelers to this alpine area of the plateau, and you do have a choice of northern or southern route. While many choose the northern route to Nyingchi for the faster trip and better roads, especially now the new expressway is open, some do opt for the longer and more scenic southern route, through Lhoka Prefecture.

The route to Nyingchi from Lhasa in the north follows the new Lhasa Nyingchi Expressway, a faster multi-lane highway that has replaced the former highway. Recently opened to traffic, the expressway has made travel to the eastern prefecture of Tibet faster and more comfortable, reducing driving time from 8 hours to around 5 hours to cover the vast 400-kilometer distance. 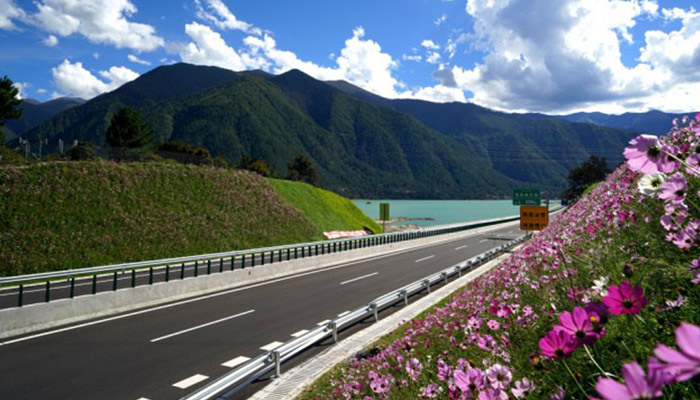 The road passes through several amazing locations along its length, the first of which is the famous Mila Mountain. No longer does the road head up over the Mila Mountain Pass, but instead drills its way through the mountain to emerge on the other side. Cutting 5.27 kilometers through the mountain, the tunnel lies at an altitude of 4,750 meters, making it the highest highway tunnel in China.

Known in Tibet as Draksum Tso, the Basum Tso Lake is another amazing sight on the route to Nyingchi from Lhasa. Located at an altitude of around 3,700 meters, this unique lakes is renowned as one of the most beautiful in eastern Tibet. Surrounded by stunning mountains, and the subject of dozens of mythical stories and legends, the lake is also the site of the Tashi Island, home to the Tso Dzong, a Nyingmapa chapel in Tibetan Buddhism. For those traveling to Nyingchi from Lhasa for the first time, the northern route is the best route to take. 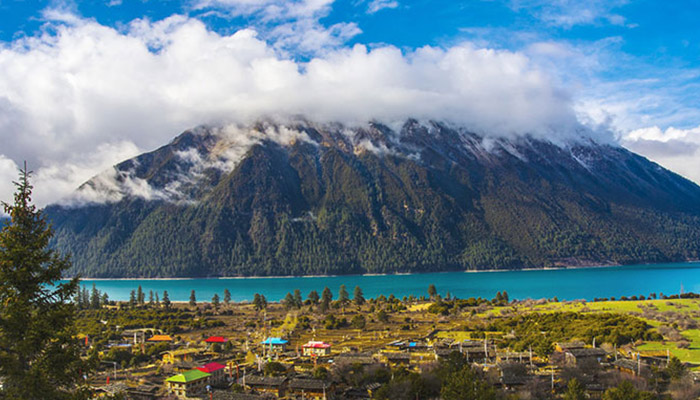 Amazing Basum Tso Lake is a must-see in Nyingchi.

If you love sightseeing, then the southern route is the best option for you. Traveling down from Lhasa into Shannan Prefecture, known here as Lhoka, the route then heads west through Tsedang, the seat of Shannan, and on to Mainling County in Nyingchi before heading finally to Bayi Town, the center of Nyingchi Prefecture.

Samye Monastery is a highlight along the south route from Lhasa to Nyingchi.

A distance of around 607 kilometers, this scenic southern route takes around 11 hours 30 minutes to drive, and should only be done by experienced drivers. A long drive to the center of Nyingchi Prefecture, the route passes by several amazing attractions that are well worth visiting for those that have the time to take this extended trip through Shannan.

One of the main attractions of this route is the Samye Monastery, an ancient 8th century monastery that lies at the foot of Mount Hepo Ri to the north of the Yarlung Tsangpo River. Further along the route, you will pass through Tsedang, the seat of Shannan Prefecture and the main town in what is known as the Cradle of Tibetan Civilization. Tsedang is also the location of the Yumbulakang Palace, the first building in Tibet.

Can I Cycle from Lhasa to Nyingchi?

With the road to Nyingchi from Lhasa being a decent highway, cycling is one option you can choose to get to the prefecture, though you will need to be pretty fit to manage the long 400-kilometer ride. The trip normally takes around four days, and there are plenty of towns and villages that you can stop in along the way, for meals or just to rest and enjoy the scenery.

However, as international tourists are not permitted to travel independently in Tibet, you will need to be on a booked tour with a registered travel agency who will provide your guide and support vehicle. We can arrange this for you, and make your dream of cycling along the Tibetan plateau come true.

The road from Lhasa to Nyingchi has plenty of hostels and guesthouses along the route, so you will have plenty of options for accommodation to suit your needs. There are also places to eat along the way, but in case you are not a fan of Tibetan and Sichuan cuisines, you might need to bring some packet foods with you.

Lhasa to Nyingchi by Flight

While there is an airport in Nyingchi – the Nyingchi Mainling Airport – there are currently no flights scheduled from Lhasa to Nyingchi. If you want to take a flight to Nyingchi, you will need to first fly from Lhasa to one of the airports in mainland China that have direct flights, such as Chengdu, Chongqing, Xi’an, etc. In total, you can expect it to take around 10 hours to travel to Nyingchi via mainland China, which is twice the time of the normal drive, and around 20 times more costly. 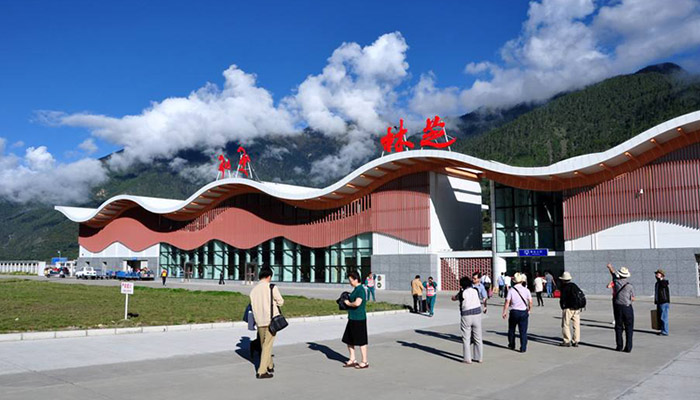 Nyingchi Mainling Airport is the only one airport in this region.

However, if you are intending to take a flight to Nyingchi, and are willing to travel to mainland China to do so, there are direct flights from Chengdu, Chongqing, Xi’an, Shenzhen, and Lanzhou. From Xi’an, there is one daily flight at 6:30am that lands in Nyingchi at around 9:20am, while the one and only flight from Chongqing departs daily at 6:50am, taking 2 hours 50 minutes to reach Mainling Airport.

However, Nyingchi Mainling Airport is located in a mountain valley at 2,949 meters above sea level, and is surrounded by mountains. While it is the lowest airport in Tibet, it is also the hardest to get to, due to its location. The airport is often enveloped in clouds and fog throughout much of the year, and on average, flights can often only run for around 100 days of the whole year, so you may be out of luck.

Lhasa to Nyingchi by Train

As of this time, the railway that has been planned from Chengdu to Lhasa, known as the Sichuan Tibet railway, is still under construction. However, the section of the railway from Lhasa to Nyingchi is expected to open be the end of 2020, so this route will soon be open for tourists that want a faster way to get to Nyingchi.

The route that is being built travels through Gonggar County, Nedong, Nang, Tsedang, and Mainling, and will end in Nyingchi in Bayi Town. The planned railway is set to include more than 17 stops along its route, and will pass through 47 tunnels and over 118 bridges. The longest tunnel is the proposed Dagala Tunnel, which will drill through 17.31km of the mountains, while the Zhangmu Grand Bridge, which is yet to be finished, will be the first weather-proof uncoated steel bridge in Tibet.

While the railway is still under construction, tourists are recommended to take the northern route through the Mila Mountain Tunnel until such time as the railway is up and running. Once it is, it is expected to cut travel time to less than three hours.

While there are many ways to get to Nyingchi from Lhasa, including driving, flying, cycling, and one day the train, the best way to get there is still along the northern road route. Travel to Nyingchi also means that you may need additional permits to get there. Tours to Lhasa on its own only require the Tibet Travel Permit, but for a trip to Nyingchi, you will also need the Alien’s Travel Permit, for travel outside Lhasa, as well as the Restricted Areas Permit (Military Permit) for travel to Lhasa itself. And as the area is near to southern borders of Tibet, the Frontier Pass will also be required. Fortunately, these can all be arranged by us before you depart from Lhasa.

Read More about How to Travel from Lhasa to Nyingchi