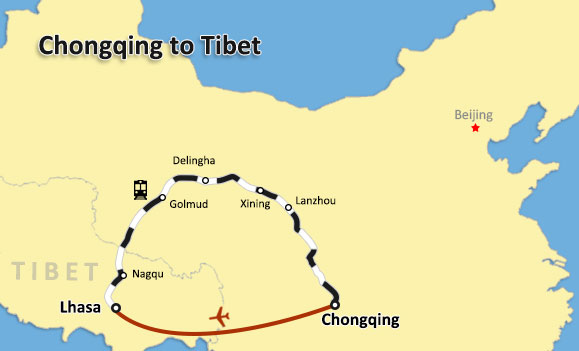 Renowned for spicy hot pot and stunning night view of Jialing River and Yangtze River, Chongqing attracts tourists from all over the world every year. Starting your Tibet tour from such a vibrant city is a good choice. Except for tasting delicious hot pot and enjoying beautiful river view, there are many things worth to experience in Chongqing, such as visiting famous Hongya Cave, going to Three Gorge Museum to learn about the history of Three Gorges and Chongqing, walking in the old street in Ciqi Kou to buy some exquisite souvenirs, and so on.

After ending your splendid Chongqing tour, you will head to Tibet. For travelers who have limited time, you can take a direct flight from Chongqing to Lhasa. While, for tourists who desire to enjoy the wonderful scenery along the Qinghai-Tibet Railway, you can take a train from Chongqing to Lhasa. In Tibet, no matter you want to sightsee the cultural landmarks of Lhasa, or would like to explore the natural landscapes of Tibet like EBC, Mount Kailash, you can have your dream come true with our help.

As the leading tour operator with years of experience, we handpick the most popular Chongqing Tibet tour packages for you. And to make sure you have a pleasant journey, we will provide you the best service, including obtaining the Tibet Travel Permit and other required documents, and arranging vehicle, accommodation, and guide service, etc. Join us right now to go for the journey of your lifetime!

We have carefully designed a wide selection of Chongqing Tibet tour packages for your choice. Ranging from 7 days to 18 days, you can choose the itinerary that works best for you. If there is no suitable trip you prefer, we can also help to customize your perfect itinerary according to your own needs.

Haven’t found the Chongqing Tibet trip you like? Tell us what you need.

How to travel to Tibet from Chongqing?

Getting to Tibet from Chongqing can be done by either flight or train, or a combination of both if you wish. Direct flights to Lhasa from Chongqing Jiangbei International Airport run five times a day, and are offered by such airlines as Tibet Airlines, Sichuan Airlines, and Air China, among others. Flights generally take around three hours to reach the plateau capital airport.

Trains also run direct from Chongqing to Lhasa, as the city municipality is one of the seven gateway cities to Tibet. Trains depart every other day for Lhasa, with one train departing on each departure day at around 10:12pm. The Chongqing to Lhasa trains take around 35 hours to reach the plateau capital railway station by the Lhasa River, and have a choice of Soft Sleeper tickets, Hard Sleeper tickets, and Hard Seat tickets.

The alternative to a direct train to Lhasa is to take a train or flight to Xining in Qinghai Province, and then get the train to Lhasa from there. The trains to Tibet from Xining run daily and carry more passengers than any of the other trains to Tibet. And with a shorter travel time of around 22 hours, this is often a preferable way of shortening the overall travel time to Lhasa.

Is it convenient to get to Chongqing from my country?

Chongqing Jiangbei International Airport is one of the main airline hubs in Southwest China, and sees more than 40 million passengers a year pass through its gates. The airport has inbound flights from across Asia and the Middle East, as well as from more distant international locations as Budapest in Hungary, Paris in France, Rome in Italy, several airports in the United States, and Australia.

With 158 total departure locations around the world, including most of the main locations in Asia, having direct flights to Chongqing, there is always an easy and simple route to the city from outside Asia. And while this may involve a connecting flight, they are cheap throughout Asia for many economy travelers, and easy to book to connect with your flight from your home or resident country.

What are the top experiences to expect in Chongqing?

Chongqing may not be on everyone’s list of must-visit locations in China, but this ancient city has a wealth of things to see and do while you are here. Aside from being one end of the famous Yangtze River Cruises, which can take you through the Three Gorges on your trip, this municipality also includes the Wulong Karst Geological Park, on the Wu River to the southwest of the city. Home to streams, caves, gorges, and unique karst limestone formations, the area is filled with natural wonders.

The amazing Stilwell Museum is dedicated to the legacy of Joseph W. Stillwell, a General in the US army that was stationed in Chongqing during WWII, who was instrumental in the resistance of the invading Japanese forces.

And the People’s Liberation Monument, built in 1945 following the end of WWII stands more than 90 feet above the heart of the city. And for those that want to relax, try out the Ronghui Hot Springs, where you can relax and wind down, ready for a relaxing train ride to Lhasa.

When is the best time to visit Chongqing and Tibet?

March to May and October to November are the best times for a combined tour of Chongqing and Tibet. Chongqing is renowned as the Capital of Fog, and most of the muggy and humid summer monsoon days are found to be rather foggy, as well as being hot and very wet from the rains.

Spring and autumn can still be a little chilly in the early spring and late autumn, and sweaters are advised. But with generally clear days and none of the summer heat, they are comfortable times to visit. And with the winters being mild and pleasant, with lows that reach down only to around 5 degrees in January, the winter months from December to February are a good time for a budget trip to Chongqing and Tibet.

China Tibet Tours from Other Cities

Wanna enjoy a China Tibet tour starting from other gateway cities? No problem! Our travel experts have also designed a series of Tibet Tours from Beijing, Shanghai, Chengdu, Xining, Guangzhou and Xi'an, etc. Check as follows.

Be the First One to Comment "Chongqing Tibet Tour"