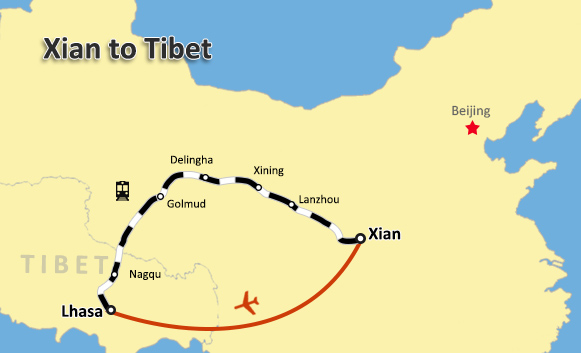 Xi’an, a time-honored city, is a good travel destination for tourists who are big fans of Chinese culture. Here, there are a large number of attractions worth to see for it used to be the capital of the 13 dynasties of ancient China.

After touring the history-soaked Xi’an, you will head to Tibet by plane or by train. The azure sky, sweeping mountains, jade lake, majestic glacier, vast grassland, etc., you will be immersed in a picturesque world.

We have carefully designed a wide selection of Xian Tibet tour packages for your choice. You can have a classci Xian Lhasa trip in just one week, or spend extra days exploring more destinations of Tibet including EBC, Shigatse etc., or even extend your journey to Nepal. If there is no suitable trip you prefer, we can also help to customize your perfect itinerary according to your own needs.

Haven’t found the Xian Tibet trip you like? Tell us what you need.

What are the top things to do in Xi’an and Tibet?

Xi’an, In Shaanxi Province, is one of the oldest and most historical cities in China, and is the location of the capital of the First Emperor of China, Emperor Qin. Dating back more than 3,000 years, the city became very famous around the world in the 1980s after the discovery of the Terracotta Army. Uncovered in a field after lying buried for more than 2,000 years, The find consists of soldiers, chariots and horses made from clay that were buried with the First Emperor to accompany him into the afterlife.

That is not the only famous attraction here. As well as the Ancient City Wall and the Bell Tower, from the 14th century Ming Dynasty, the city is renowned for the stunning Big Wild Goose Pagoda, one of the main birthplaces of Buddhism in China from the 7th century Tang Dynasty.

In Tibet, the main attractions to visit are in Lhasa, with the exception of the Everest Base Camp in Shigatse Prefecture. In the capital, you can climb up to the former home of the Dalai Lama, the Potala Palace, and stroll around the kora along Barkhor Street with the pilgrims visiting the sacred Jokhang temple.

How to get to Xi’an?

How to travel to Xi’an in Shaanxi Province depends on where you are traveling from and personal preference. For some, trains are a good way to travel, while for others, flights are preferable.

Domestic flights to Xi’an run from Beijing, Shanghai, and Chengdu daily, and generally take from 45 minutes to 90 minutes to reach the city. Xi’an is also a hub for international flights, and receives flights from across Asia. Flights into Xi’an Xianyang International Airport also run from Russia, Spain, the Czech Republic, Australia, Finland, the United States, France, Italy, the United Kingdom, and Turkey.

How to get the Tibet Travel Permit before my Xi’an Tibet tour?

If you are traveling on to Tibet after visiting Xi’an, then you will need to be booked on a pre-arranged tour of the region with a registered tour operator of travel agency. After you have booked your trip with us, we will make the application for the Tibet Travel Permit on your behalf with the Tibet Tourism Bureau in Lhasa. Once approved, the permit will be sent to our offices in Chengdu, from where we will have it delivered to your hotel in Xi’an ready for your departure to Tibet.

We will ensure that the permit will be in your possession prior to your train or flight to Lhasa. For flights, you will need to have the original permit document, while for train trips, you can use a photocopy of the permit for boarding and checks.

Is there high-speed train from Xi’an to Lhasa?

Unfortunately, there is no high-speed train from Xi’an to Lhasa, and there is no plan to introduce one in the near future. However, there are trains that can take you to Lhasa in Tibet, which depart from Xi’an railway station daily. You can normally take a train that runs direct to Lhasa only in the low season, as there is actually no train that starts from Xi’an. Instead, the trains from Shanghai and Guangzhou stop in Xi’an, and in the winter, you can normally book a ticket from there. In the peak season, the trains are normally full before departing from Shanghai and Guangzhou.

Your alternative to taking the direct train is to take a normal train on to Lanzhou or Xining, and then board the trains to Tibet from there, as these are both stations that have direct railway access to Tibet. Xining is the best option for this, as the train is longer, having more carriages to carry more passengers.

China Tibet Tours from Other Cities

Wanna enjoy a China Tibet tour starting from other gateway cities? No problem! Our travel experts have also designed a series of Tibet Tours from Beijing, Shanghai, Chengdu, Xining and HOng Kong, etc. Check as follows.

Be the First One to Comment "Xian Tibet Tour"