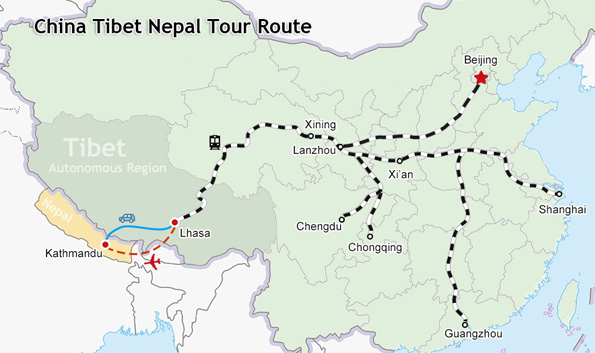 Travelling to China, Tibet and Nepal together has become a new trend among many tourists, as it is an infinite opportunity to dive into the diverse culture and history of three destinations. A China Tibet Nepal tour will usually take at least 10 days, and one can choose your preferred travel route, either from China or Nepal.

As a poplar choice for many, you can start the trip from your most interested gateway city in mainland China, like Beijing, Shanghai, Chengdu, Xi’an etc., and then take the popular Tibet train or flight to Lhasa. Following the overland trip from Lhasa to Kathmandu, the journey will bring you to the kingdom of Nepal in the end.

An epic journey one will probably experience once in a lifetime, the China Tibet Nepal tour will let you enjoy modern and ancient Chinese culture, unparalleled Tibet train ride, spiritual witness of Buddhist monasteries and glorious Everest Base Camp exploration in both sides of the Himalayans, and many more.

Being an expert on long-term tours across China, Tibet and Nepal, we can free you from intricate tour booking and preparation. Not only you can opt from a series of well-designed China Tibet Nepal tour packages, but also enjoy excellent services like Tibet permit application, Tibet train ticket and flights booking, hotel arrangement etc. Backed by a team of China Tibet Nepal travel gurus, we will give you great tour flexibility and ensure you a seamless travel you deserve.

If you are looking forward to travelling to China, Tibet and Nepal on a budget, then our best-selling China Tibet Nepal group tour packages could be your option. Ranging from 10 to 20 days, these well-designed itineraries can fulfill your dream journey to three amazing regions in one go. Choose the one that works best for your holiday!

To facilitate our clients with varied preferences, we also designed a series of China Tibet Nepal private tours starting from Shanghai, Chengdu, Xi'an, Hong Kong etc. Whether you will travel solo or join your friends and relatives, there would be the one for you. If there is no suitable trip you prefer, we can also help to customize your perfect itinerary according to your own needs.

Haven’t found the China Tibet Nepal trip you like? Tell us what you need.

What Travel Documents to Obtain for China Tibet Nepal Tour?

Firstly, if you choose to travel from Tibet to Nepal following the sightseeing in China, you will need to get a Chinese Visa and Tibet Travel Permit as a basis. The Chinese Visa can be obtained from your nearest Chinese Embassy before you enter China. The Tibet Travel Permit, also known as Tibet Visa, can only be obtained with your valid Chinese Visa and passport. To get the Tibet permit, you need to find a local travel agency like us, to help you make the application.

If you choose the opposite route as travelling to Tibet from Nepal and then onto China, then the rule on permits will go slightly different. You will need to obtain a Chinese Group Visa together with the Tibet Travel Permit. The Chinese Group Visa is a special type of entry visa, and will only be obtained through the Chinese Embassy in Kathmandu, before one enters Tibet from Nepal. Also, it can also be applied through a local travel agency and the validity of visa is usually no more than 30 days.

Besides, when touring in Tibet, you will also need to get other permits in order to visit some restricted areas, like Aliens’ Travel Permit for Mount Everest region and Military Permit for Mount Kailash areas.

Which city is suitable to start a China Tibet Nepal tour?

In mainland China, one can start a China Tibet Nepal tour from gateway cities like Beijing, Shanghai and Chengdu. Shanghai and Beijing are two metropolis cities that have frequent connections to the rest of the world, and both boast a wealth of famous landmarks to visit. One can also take a flight or Tibet train to Lhasa directly from the two cities.

As to Chengdu, it is the best city to enter Tibet by air. There are more than ten non-stop flights flying from Chengdu to Lhasa every day and it only takes about 2.5 hours. Besides, Chengdu as the most developed city in southwest China, has gained increasing connections to many overseas destinations.

In addition, one can also choose Kathmandu, the capital of Nepal, to start a journey to the three regions. Kathmandu is the only city that offers international flights to Lhasa, and the flights depart daily and takes only 90 minutes or so. Tourists can also take an overland trip from Kathmandu to Lhasa, along the well-paved Friendship Highway, and then continue to mainland China by train or flight.

When is the best time to enjoy a China Tibet Nepal tour?

Basically, China is a destination that can be visited all the year round for most of its land has moderate climate and weather. But it is better to avoid the peak travel season like Chinese National Holiday, May Day Holiday etc., since there will be a large crowd of domestic travelers rushing to Beijing, Shanghai and more popular cities.

The best time to visit Tibet is from April to June and September to November, when the weather is mild and steady, with less rainfall and snowfall. Winter in Tibet could be freezing cold in most areas on the plateau, despite there are some places like Lhasa city enjoying relatively warm temperature. Summer time of July and August is good for travel, but not so suitable for trekking in mountain areas considering the heavy rainfall.

As Nepal goes through a temperate climate, one can visit Nepal in each season. For most tourists travelling to Nepal for mountain trekking, the best time could be from late September to late November. During this time, the weather is clear and dry, and it is neither too cold nor too hot.

Need more professional help for planning your upcoming China Tibet Nepal tour? No worries! Click the latest travel advice and get to know loads of useful tips before your epic journey to China, Tibet and Nepal.

Be the First One to Comment "China Tibet Nepal Tours"