When is the Best Time to Visit Everest Base Camp

As one of the hottest tourist destinations, Mt. Everest Base Camp attracts numerous visitors to see the magnificent natural beauty of Mt. Everest at the closest distance every year. Since the climate types in Tibet and Nepal are quite similar due to itsgeographical adjacency, tourists come to Himalayas for an Everest Base Camp tour could expect similar tour seasons.

What follows is the best time to visit Everest Base Camp both from Tibet side and Nepal side. You could refer to them as you have a Mt. Everest tour according to your own time schedule.

Timing for an Everest Base Camp tour from Nepal side

Spring is an ideal time for a tour around EBC Nepal site. These months are considered to be the best in terms of weather and beauty of nature, and thus are the busiest trekking season. You could see many trekkers along the trails heading to EBC. Spring days are warm and sunny here in Nepal with occasional rains inviting wildflowers and green new shoots dotted on a lush backdrop. 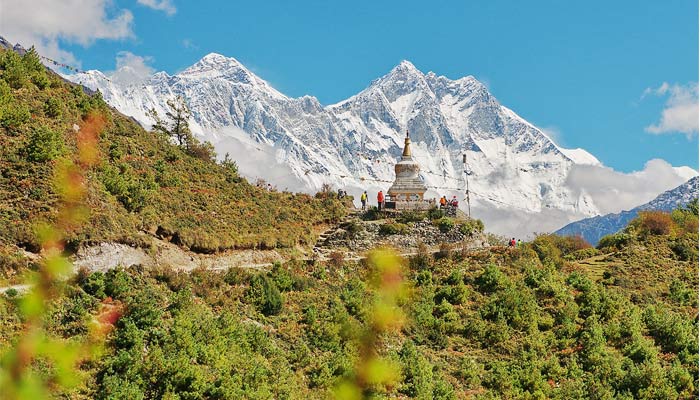 Trekking to EBC in Spring

Autumn is also an golden time for trekking to EBC. Tourists could enjoy breathtaking mountain views throughout the whole EBC areas during the autumnal months. The weather is dry and clear with cool daytime and not that cold night. However, as you climb to higher altitudes, the nights can easily drop to below zero and we suggest you get prepared in advance. 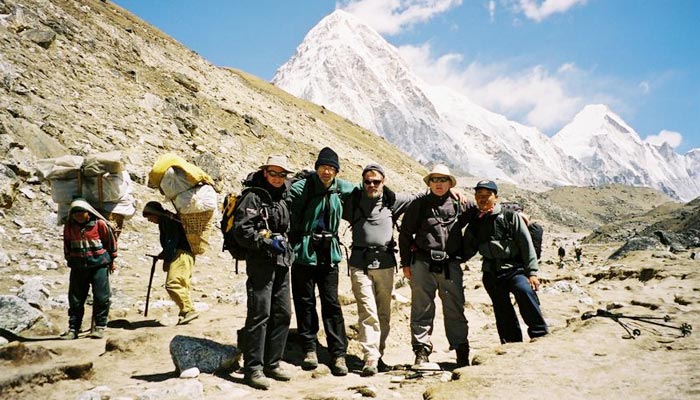 Trekking to EBC in Autumn

From June to August, it is the monsoon season in Nepal; tourists are suggested to avoid the monsoon season for an EBC tour. Severe rains often block certain trekking routes to EBC. Lodges and trekking operations in some areas are closed during these times.

Trekking to EBC Nepal site in winter is often a unique experience; during the trekking you could enjoy the quiet beauty of nature and avoid the crowds. The weather at such times is generally dry. However, the daytime temperatures are much cooler and nights are often very cold. You may sometimes meet storms that can bring snow to as low as 2,500 m. Trekking to EBC during this season could be more challenging than in other times of the year. 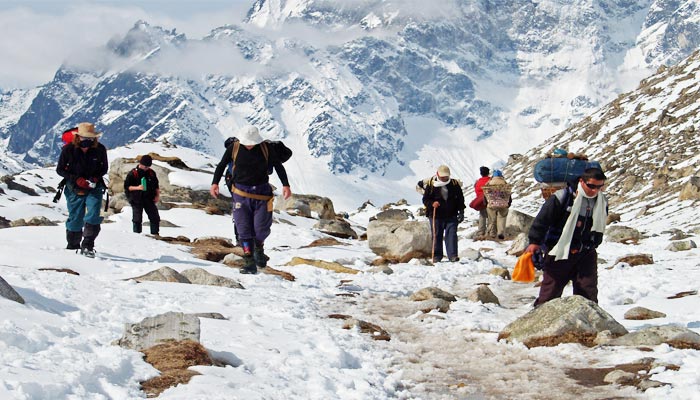 Trekking to EBC in Winter

Timing for an Everest Base Camp tour from Tibet side

Spring season (from April to early May)

Spring is the peak season for having a tour at EBC Tibet site. You could trek in warm sunny days with early spring chills while the blue sky is clear and near to you. As this is the best time in a year for an Everest Base Camp tour, you will meet many people following the same trekking route. This will certainly be a wonderful experience adding colors to your Everest Base Camp tour. 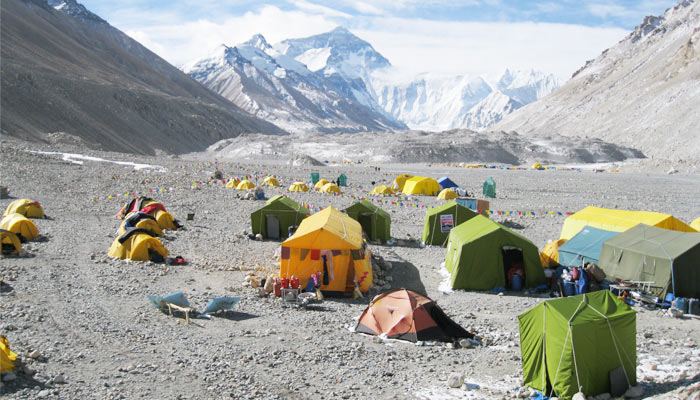 Autumn is also among the best time for an Everest Base Camp tour. Even though it is not the warmest season, these times offer tourists splendid temperature and autumnal landscapes with clear views of snow capped mountains and vibrant vegetations. 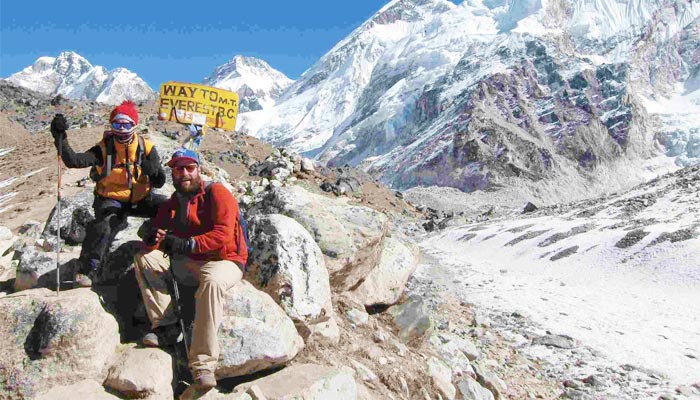 Trekking to EBC Tibet in Autumn

From late May to mid-June is the second best time to tour around EBC Tibet site; at such times you have a big chance to see the Mt. Everest peak and the sky is often clear and dry giving you distinct image of the snowy alpine landscape. If you are a mountain climber, the climbing window between May and June is also one of the best to attempt an ascent to the summit. 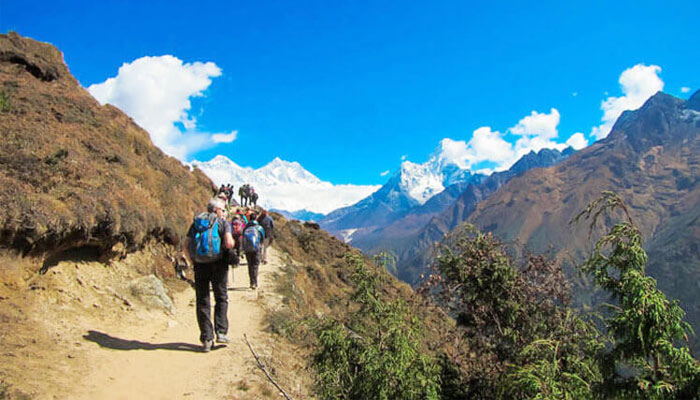 Trekking to EBC Tibet in Summer

summer may sound like the prime time for a tour to Everest Base Camp, but it is a monsoon season, and is the wettest period both in Tibet and in Nepal. The clouds forming from Indian Ocean bring large quantity of rainfall. During these times, the Everest peak is often shrouded in mist. Not many foreign trekkers would hike during the monsoon period as mud, rain, leeches and, most importantly, lack of mountain views, put most hikers off.

Winter season (from November to January):

During the months from November to January the temperature is very cold at higher altitudes. It is also the coldest time in Tibet and Nepal. But for adventure enthusiasts, the weather still remains dry, so if you could endure the cold, then you could join an EBC tour during these months with extra layers of clothes. The place would be less crowded during these times also. 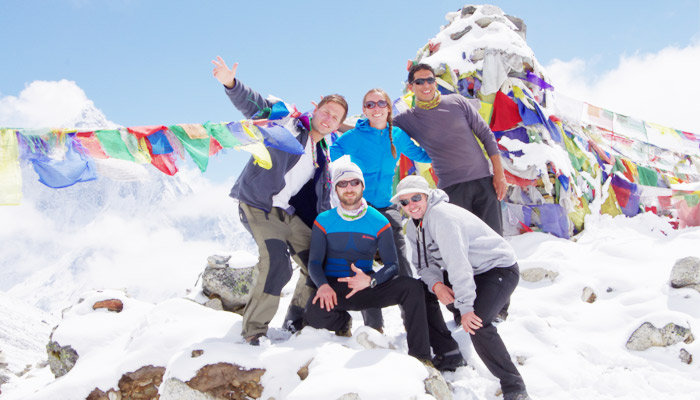 The best time for an EBC tour for Tibet and Nepal sites is mostly determined by weather conditions and climate around the area. Even in summer, temperatures could fall far below freezing point at night in both sites. Sometimes you might be trapped in your tent because of the heavy snow. Thus, you need to be careful in your preparations and proper clothes and trekking gears are also vital for such a tour.

What to Pack for an EBC Tour

Tibet Trekking Permit
If you want to travel to Tibet, it’s necessary for foreign tourists to get relative Tibet permit. There is no need to worry about it. Tour agency will handle procedures when relative identification provided like passport.

Proper equipments needed
1. Duffel bag to carry gears while trekking
2. Day pack: this is a small rucksack to carry personal requirement for the day e.g., toilet items, camera film, towel, soap, etc
3. Water bottle
4. Sunglasses and snow glasses
5. 2-4 large plastic bags to separate clean clothes from dirty ones. 6-10 smaller plastic bags to dispose garbage
6. Wallet and/or money belt with compartment for coins
7. Toiletries with large and smaller towels. Toilet paper can be bought in Lhasa and some villages in the mountains
8. Small headlamp or torch with spare batteries and bulbs, a box of matches or lighter to light the fire while cooking or burn the garbage
9. Snow gaiters is essential in April, May and October, December at the beginning and the end of the winter for the snow on the mountain somewhere is deep to your knee. 10. A sewing box with needle and thread can help you sew something
11. Camera, enough batteries (the batteries run fast in low temperature.), a note book, a pen, a pocket knife, an inflatable sleeping mat, a trekking map, GPS, etc. are optional if you want to take them

Suggested clothing
1. Lightweight walking boots or hiking shoes, if you plan to buy a new pair, please wear them for some days at home to avoid blisters. Also bring spare laces and cotton shoe-pads. Women’s sanitary pad is a very good material to put into your shoes to take the sweat away.
2. A pair of normal walking shoes. You can wear them in the camp at night.
3. Warm jacket. Fiberfill or down should be adequate. If you trek is in April, May, late September or October, a down jacket is a must. Sometimes the temperature at night is Zero or even below Zero. November to next March is winter. It is too cold and not suitable for trekking.
4. A rain-proof jacket with hood or a poncho. Get one that is guaranteed waterproof. Don’t forget to prepare a rainproof bag for your backpack as well.
5. Woolen shirts and thick sweaters.
6. A pair of light weight trousers, the loose cotton pants are the best. Jeans are unsuitable to wear on treks. Windproof/waterproof trousers are necessary on all treks going above 10000 ft.
7. Wear warm trousers in the morning and at night.
8. Thermal underwear: these are excellent to sleep in at night. In the winter time, thermal underwear are quite in demand.
9. 2-3 cotton T-shirts, and it is better to have one long-sleeved shirt for avoiding sun burn.
10. 1-2 towels for removing the sweat on your back and head.
11. Wear a woolen hat in the morning and at night. During winter it is an essential item. A sun hat and ensure it has a wide brim to cover the face and neck.
12. A pair of gloves.
13. Several pairs of thin and thick woolen socks.
14. Cotton underwear.