Mount Everest lies 28° north of the equator and is subject to a typical northern hemisphere seasonal pattern. Its climate is mainly determined by the Indian Monsoon which brings moisture and clouds from June to September.

The climate in the Everest region in Tibet has clearly defined seasonal changes, which are the same year after year with no change in the environment. The whole year in the EBC areas can be divided into spring (from March to May), summer (from June to August), autumn (from early October to late November) and winter (from November to February).

EBC in Spring (April – May)

From late March the end of May is the main spring season at EBC, and is one of the best times to visit the area of the base camp, especially for the trek from Tingri to EBC. The weather at the basecamp in the spring months is relatively cool to start, rising to warmer temperatures as the season progresses towards summer. April average high temperatures range from around 6°C, and rise to as high as 15°C in May. Nights are still fairly cold in April, at around -10 at the coldest, but by the end of May, they have risen to around freezing. 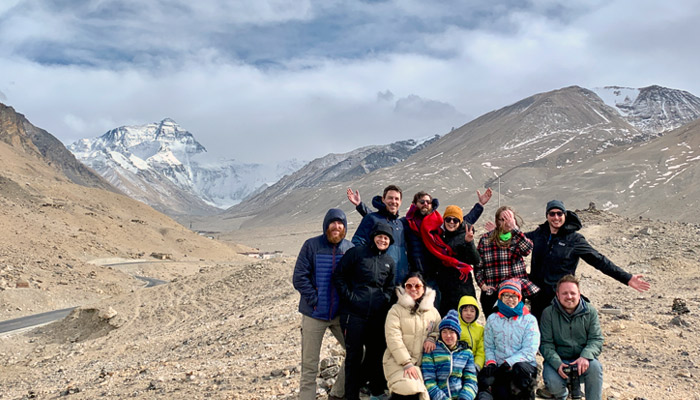 Traveling to EBC in April when the weather is dry and arid.

The weather is generally clear throughout the spring, with slightly more rain in May, reaching up to around 7mm for the month. Skies are dry and bright, with few clouds, making this one of the best times to view the lofty peak. The landscape is dry and somewhat arid at the start of spring, due to the dry winter months, which also makes it a great time for trekking. However, the spring does still retain the strong gales, which means lip balm and moisturizer, and the intense sunlight requires a decent hat and sun block. By mid-April, the tent guesthouse reopens for the tourist season, and the sunrise and sunset on the slopes of the mountain in this dry weather is phenomenal.

Summer is the time of the monsoon rains in Tibet, and Mount Everest does not escape them either, despite its high altitude and remote location. The Indian monsoon rains from the southwest come straight up through Nepal and up the slopes of the Himalayas, though the high mountains do block most of the monsoon rains from falling on the plateau. At EBC, the summer is not as wet as you might think, and in June, the rains are not yet that heavy, with only around 24mm for the month. Temperatures in June are getting warmer, reaching as high as 20°C during the day, and dropping to only around 4°C at night. Winds are still quite strong too, so remember the lip balm. 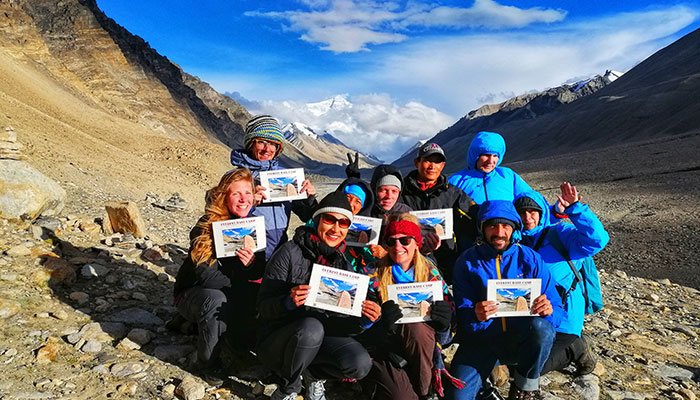 Travelling to EBC in Summer season under warm weather.

However, by July, the rain has increased dramatically, along with the temperatures. Around 170mm of rain falls in July, and the temperatures have risen to around 22°C for daytimes, and as high as 5°C at night. Nights are still chilly, so bring a good sweater, and remember to bring waterproofs, as you may get wet at the base camp at this time of year.

August is the wettest month of the year, with the rains reaching as high as around 240mm for the entire month. Temperatures range from 22°C during the day to only 5°C at night, and this is the hottest that you will see it around the base of the world’s highest mountain.

September, the tail end of summer, is drier than the rest of the monsoon season, as the rains start to die off for autumn to come. Temperature drop slightly, and by the middle of the month, very little rain continues to fall. You can expect the landscape to begin drying up shortly after, although temperatures do tend to drop to around freezing again at night. Days can be warm, though, hitting highs of as much as 20°C. Trekking also starts up again, with the drier weather at the latter half of the month.

October sees the start of autumn at EBC, and the drop in temperatures is rather dramatic. Highs during the day only reach to around 17°C, while the nights can drop to a cold -8°C before the month is out. Everest is a great place to travel in October, as the land has dried out fully, and there is almost no rain again. Trekking becomes the popular pastime once more, and the trail from Tingri to EBC is a delightful hike through some of the richest scenery you will see around the Everest region of Tibet. The clear skies and bright sunlight also allows for better and clearer views of the summit of the massive mountain, but watch out for the flag cloud that still might be hanging around on the peak. 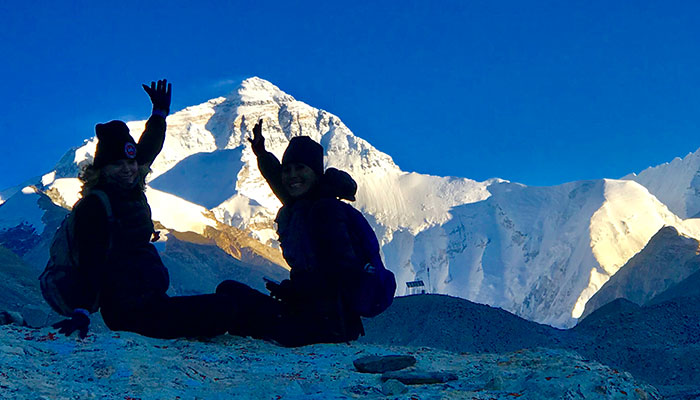 October sees the clear summit view of Mount Everest with almost no rain during the time.

November is the end of autumn, and a much colder month as the region gets ready for the cold of winter. Daily temperatures drop to around only 8°C, while at night, you can expect it to get much colder, hitting as low as -13°C. While it may be getting colder as autumn starts the slow slide into winter, this is still a great time to visit the base camp and trek from Tingri, as the days feel much warmer in the bright sunshine, and the nights can be countered with a good sleeping bag and warm layers of clothing. The base camp is dry and cold, and the bitter northeasterly winds that blow down from Siberia cut across the plateau like a knife. However, this dry, clear atmosphere makes it the best time of the year to get great shots of the mountain, as well as the unique starry skies of the Tibetan plateau nights.

EBC in Winter (November to March)

Few people visit the base camp in the winter months from November to March, and the plateau region is actually closed for around 6-8 weeks from just before the Tibetan New Year in February to the beginning of April. However, just because few people visit, does not mean that it is not possible. While you may experience snow in the latter part of the winter, the roads are kept well cleared, and driving to the base camp is just as easy. 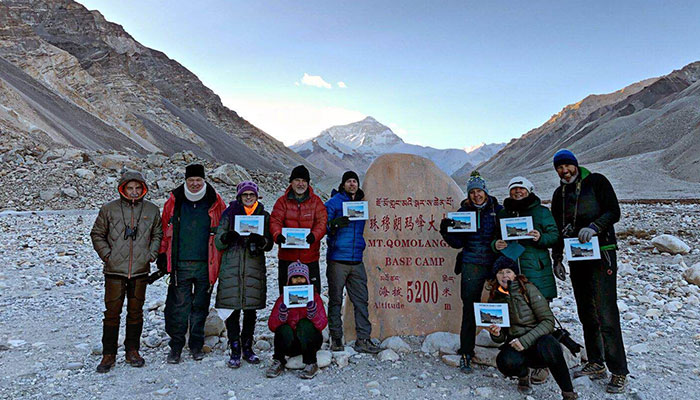 It is still possible to visit EBC in winter time.

Temperatures across the winter months range from around 6°C in December to as low as -5 in January, the coldest month of the year. February sees some warmer temperatures, rising to around 4°C during the day. At the coldest, the temperature at night around EBC can drop to around -18°C, and on extremely cold nights, even lower than that. However, despite the cold and possible snow, there is normally a bright sun in the sky above, and the sunshine tends to make the days feel warmer than they really are. You will have to bundle up against the cold, but the base camp of Mount Everest in the winter months is one of the most exhilarating experiences in the world.

What to Pack to Visit Everest Base Camp in Tibet?

Whatever time of year you travel, you will always need some warm clothes at EBC, so it is essential to know what the weather is like to know what to pack. For the warmer summer months, lighter sweaters and jackets will do in the evenings and at night, but do bring a warm sleeping bag to maintain your body temperature at all times of the year.

As it gets colder, you will need thicker jackets and warmer layers of clothing, and at the coldest, alpine or arctic jackets are a must, as is thermal underwear. Gore-Tex gloves are very useful in winter and spring, and bring some lighter gloves for summer and autumn. Rain gear is necessary in the summer months, and always have a good hat, for warmth and to keep the blazing sun off your head. Make sure you always bring good hiking boots, even if you ae not trekking, as the ground is rough and rocky around the area.

You will also need to remember all of your permits, and make sure you have them on your person, and easily accessible, at all times, as they will be required often at checkpoints and other places. You need to ensure you have the Tibet Travel Permit and the Alien’s travel Permit for a trip to EBC, and we will make the arrangements for the relevant permits on your behalf once you have booked your tour with us.

Everest Base Camp is the most popular tourist destination on the plateau, and sees thousands of tourists traveling across the plateau to visit the world’s highest mountain every year. Some prefer to visit in the most optimum times of spring and autumn, while others can only visit in the summer months due to commitments at home or work, or even school. And while the winter may be colder, it is still a great time to travel to the massive mountain, and is an amazing experience. So whatever time of year you travel, make sure that you check out the weather at EBC before you go, just to make sure you are going to get the best tour possible on the Roof of the World.

Be the First One to Comment "Tibet Everest Base Camp Weather: Climate and Weather Condition of EBC Tibet"