Where to Get the Best View of Mt. Everest in Tibet?

Mount Everest (Chomolungma in Tibetan and Sagarmatha in Nepali) came into existence some 50 million years ago. Back then, the Indian tectonic plate collided with Eurasian with a force that pushed the ground up, forming the Himalayan mountain range in the process.

In recent times, many travelers go to Tibetan Everest Base Camp (EBC) to catch a glimpse of the world's highest peak. So, let's investigate what to expect of viewing the top of the Himalayas from there.

What to Expect? the Closest View of Mount Everest

A visit to Tibetan Everest Base Camp is part of nearly every Tibet tour for international travelers. Also known as North Base Camp (with South BC being in Nepal), it stands at the altitude of 5,200m/17,056ft. Its location is in Qomolangma National Nature Preserve, in Tingri County. 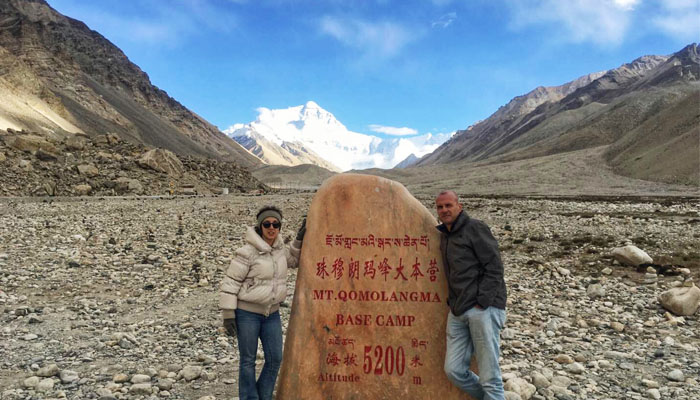 The camp on the northern side of Chomolungma is a popular option among viewers since it offers unobstructed views of the mount. The panorama encompasses barren wasteland flanked by brown mountains permeated with white snow. And the world's summit majestically dominates over all of that.

When is the Best Time to Visit EBC?

Depending on the season, you may experience unobstructed views of the top of the Himalayas or a shroud of clouds. For a high chance of having a clear sight of the mount, come to Tibetan EBC from September to May. Summer is a rainy season in the Roof of the World, and clouds tend to obscure the viewing perspective. 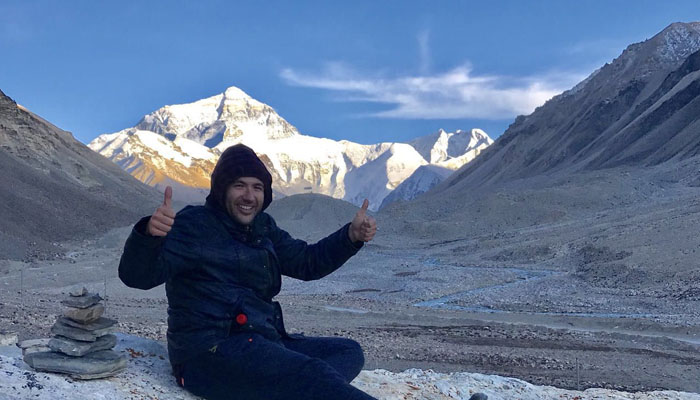 Sunrise of Mount Everest from Tibet Everest Base Camp

When you arrive, be ready to wake up early and go to sleep late for the best Mt. Everest experience. During daybreak and sunset, the sun illuminates upper parts of the Himalayan summit, while the sky behind features soft orange and violet hues. At this point, having clouds in the distance makes for a dramatic contrast because of alternating light and dark colors.

Watching Mt. Everest during the night can make you forget it's time for sleeping. Due to high elevation and virtually non-existent light and other pollution, you'll admire the night sky in its entire beauty. Bright stars dot the heavens while the whiteness of the mountain snow resonates in response.

How to Get EBC? Travel Overland from Lhasa

There are various routes you can take to get to North Everest Base Camp. However, traveling overland from Lhasa to EBC is the most common ways among holidaymakers. You will drive along the state-of-the-art Friendship Highway that runs from Lhasa to Kathmandu, which branches at Lhatse to Tingri and further to EBC. 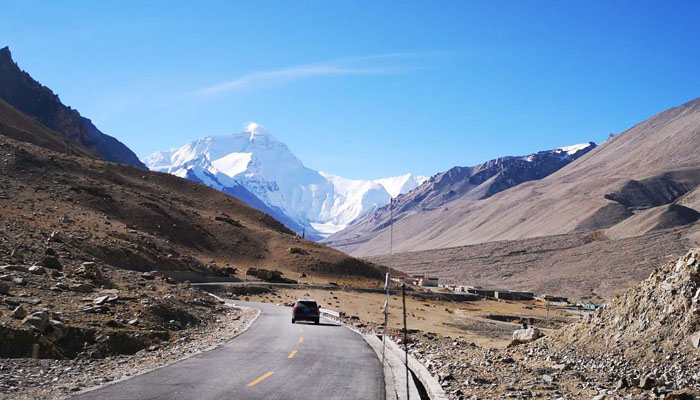 Given the options, the best way to conduct the Mt. Everest tour in Tibet is by starting a trip in the capital of the Chinese autonomous province. There are many reasons why we strongly recommend this route, and the following ones are the most important:

● The city of Lhasa sits approximately 3,650m/11,200ft above sea level, while the elevation of North EBC is 5,200m/17,056ft. By starting your journey in Lhasa, you gradually increase the height and have adapted to lower oxygen in the air to some extent.
● When travelling from Lhasa to Everest Base Camp, you will appreciate the most highlighted attractions in Tibet along the way, including the Yamdrok Lake, Karola Glacier, Tashilhunpo Monastery, Gyantse Kumbum etc.
● Also, the road from Lhasa to EBC is pretty straightforward. Moreover, you won't have to calculate time differences between Nepal and China for border crossings.
● If you travel from Kathmandu (1,400m/4,600ft), the Nepali capital, you will increase the altitude and change climate zones quickly. That way, you will expose yourself to various factors leading to a poor experience. Altitude sickness symptoms are the most severe of these.

Rongbuk is the highest monastery in Tibet and, consequentially, the world. It sits at a bit lower elevation (5,100m/16,730ft) than the base camp and offers panoramic views of the highest peak of the Himalayan mountain range from a moderate distance. Consequently, Rongbuk Monastery is one of the best places on Earth to get a view of Mount Everest. 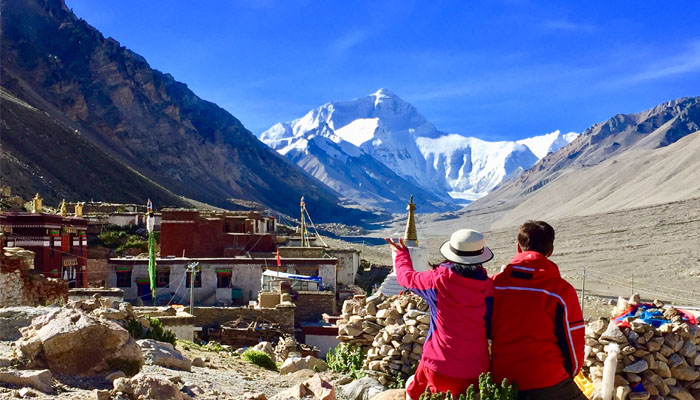 As seen from the religious complex, a nearby hill slightly conceals the mountain. However, taking a photo with the monastery in the forefront compensates for such a minor inconvenience. You can find basic accommodation there to rest before proceeding to the EBC on the Tibetan side.

While traversing Tingri County on your way to Rongbuk and EBC, you will travel through Gawula Pass. The height of the pass that is also known as Geu La is nearly 5,200 meters (17,060 feet). 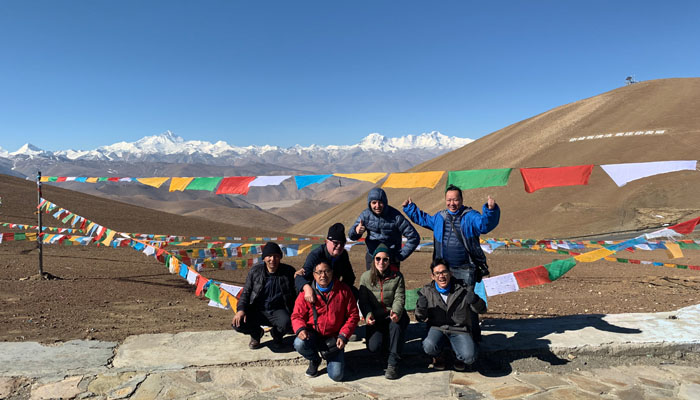 According to records, the Himalayas boast 10 out of 14 world's highest summits. Well, you can see five of them from Gawula Pass. Time your arrival there between 7 am to 8 am or 6 pm to 7 pm on a clear day. That way, you will benefit from unobstructed views of the following peaks:

While heading to Mount Everest during your Tibet tour, you are likely to travel through the Gyatso La mountain pass. Located between Lhatse and Tingri, its average elevation is around 5,250m/17,225ft. Gyatso La is one of the highest mountain passes on Earth.

While journeying along this section of the road to the Tibetan EBC, take a break to get the best view of Mount Everest from a distance. You will make out the world's highest summit with ease since all others are significantly lower, as seen from this spot.

Flying from Kathmandu to Lhasa: See Mount Everest from the Top

Do you know what bar-headed geese and passengers of Air China have in common? These are aerial views of the top of the world. Flying between Kathmandu and Lhasa grants you a privilege of admiring Chomolungma or Sagarmatha (depending on the direction) from a birds-eye perspective. 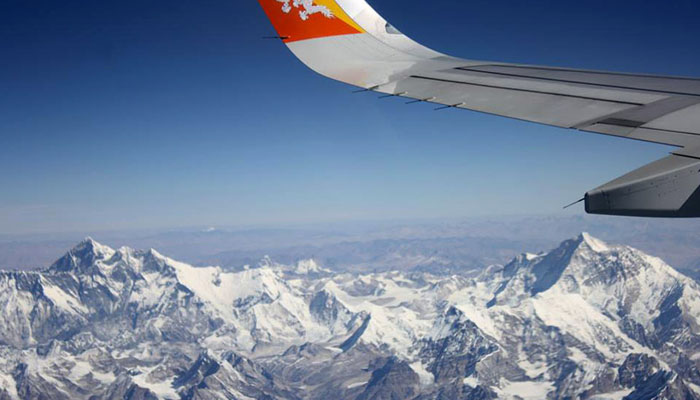 Aerial View of Mount Everest from Kathmandu to Lhasa flight

Shortly after take-off, rugged Himalayan mountains come into view to follow you most of your flight. While flying over Nepal, try to make out eight of ten highest mountains of our planet.

However, flying from the Nepali to Tibetan capital comes at a cost. Since Kathmandu sits at the height where oxygen is in full supply, you may feel discomfort once you land at Lhasa Airport. In this way, you’d better spend a couple of days in Lhasa for adaptation before go to higher places.

Since individual travel to Tibet is not allowed, you need to book a tour via a local tour operator, when you want to visit Mount Everest in Tibetan side. Furthermore, you need certain travel permits to tour the Land of Snows, Mount Everest included, which travel agency can help you acquire.

As the leading tour operator running for a dozen years, we offer guided tours to Mt. Everest, and also provide customized service for your preferred private trip. So, start booking your tour with us to enjoy your trip to Tibet and Mount Everest in full. 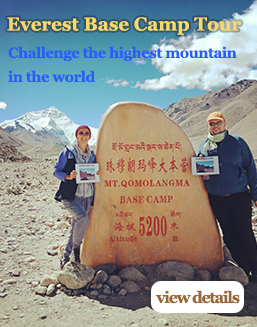 Read More about Where to Get the Best View of Mt. Everest in Tibet?

Be the First One to Comment "Where to Get the Best View of Mt. Everest in Tibet?"