Chongqing to Lhasa Flight: A Good Way You May Omit to Travel to Tibet by Air

For many travelers heading to the Tibet Autonomous Region from mainland China, the most popular places to depart from include Shanghai and Beijing. While they may be the most popular choices for travelers, these two major cities in eastern China are actually not as convenient for travel to Tibet as the Chongqing, in Southwest China. One of only four direct administered municipalities in the country, Chongqing is one of the best and most convenient places from which to get flights to the Lhasa Gonggar International Airport.

Why take the flight from Chongqing to Lhasa?

Chongqing is served by the Chongqing Jiangbei International Airport, which lies in the Yubei District, just 19km from the city center of this Austria-sized megacity. Awarded Best Airport in its class in 2017 and 2018, the airport is rated as the 9th busiest airport in China and handles around 41.5 million passengers a year.

As a busier airport, Jiangbei now offers around ten daily direct flights to Lhasa, which depart between 6:00 am and 2:00 pm every day of the week. Offered by such reputable airlines as Tibet Airlines, Sichuan Airlines, China West Air, Air China, Xiamen Air, and China Southern, these popular flights means that you have more options for getting to Tibet from Chongqing, compared to other departure cities. On the other hand, the train from Chongqing to Lhasa only leaves every other day. 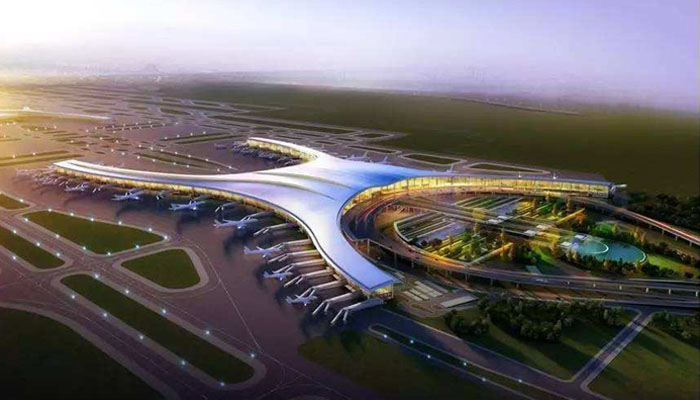 A shorter flight time is always welcome when traveling, and with the flights from Chongqing to Lhasa taking just 3 hours, you can be in the Tibetan capital up to five hours earlier than on a flight from Shanghai and a couple of hours before your flight from Beijing would arrive. And if you are spending less time on the flight, you can spend more time enjoying the beauty of Chongqing or the stunning landscapes around Lhasa. For example, a classic trip of Chongqing and Lhasa together only takes 7 days, but will allow you to cover the best must-sees of two places, when you take the flight. 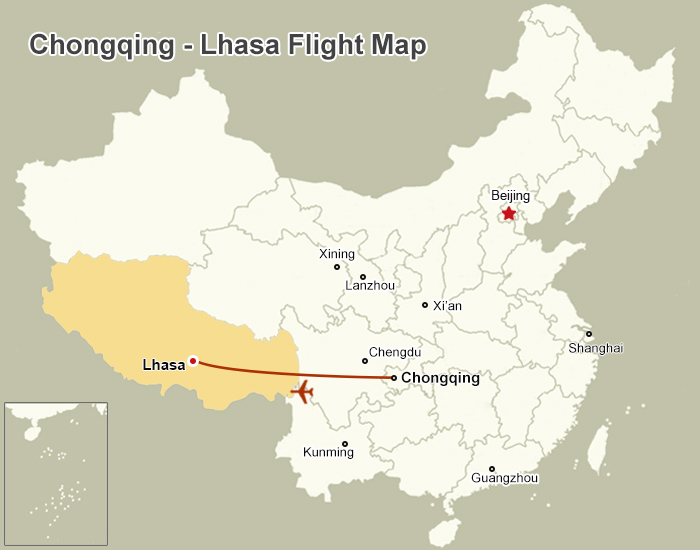 Another reason to take your flight from Chongqing instead of Shanghai or Beijing is the overall cost difference between the three airports. Flights from Beijing and Shanghai can cost from around 400-500 US dollars per person for a one-way economy flight to Lhasa. From Chongqing, you can get a flight for as little as 305 US dollars per person, which is a much cheaper option for travelers to Lhasa.

Since it was upgraded in 2010, Jiangbei has moved from Asia-only flights to new international long-haul destinations since August 2017. The airport now boasts non-stop routes to such distant cities as London, Los Angeles, New York, Rome, Paris, Budapest, Sydney, Melbourne, and many others. With these long-haul flights now connecting Chongqing to the rest of the world, it is even easier to get a flight into Chongqing direct for your lifetime Tibet vacation.

Who are recommended to take a Chongqing to Lhasa flight?

Chongqing flights to Lhasa are ideal for a wide variety of travelers heading for the Tibetan plateau. Chongqing is a much better option for those that have already visited Beijing and Shanghai and are looking for somewhere different to visit before their Tibet tour. And for those that do not want to take the train, but are still interested in saving money, the flights from Chongqing are the perfect options for budget travelers. 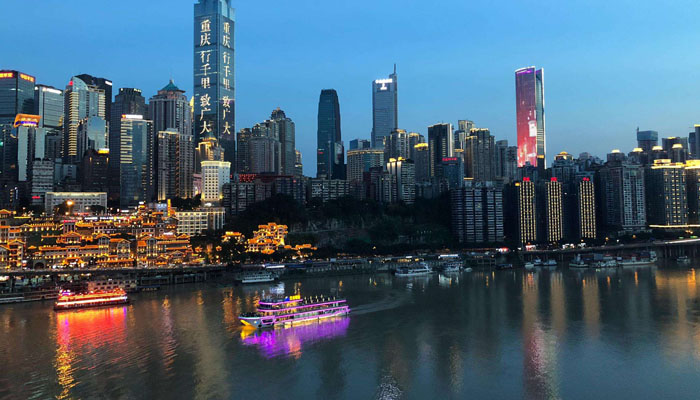 And if that is not enough to convince you Chongqing is worth visiting to take your flight to Lhasa, this unique megacity has some amazing resort options for vacationers that include scenic natural landscapes, profound cultural heritage, and the opportunity to take a cruise along the Yangtze River.

How to take the Chongqing to Lhasa flight?

Getting a flight from Chongqing to Lhasa is a great option for a number of travelers to the plateau region, and there are some great ways to make your visit to Chongqing fun and enjoyable, with the many tourist-oriented sights you can visit around this vast metropolis. If you are planning to take your flight to Lhasa from Chongqing, there are a few things to consider before you travel there.

Book the flight in advance

While there are ten flights a day from Chongqing to Lhasa, this is a very popular departure airport for travelers to Tibet, so it is a good idea to book your flights as early as feasibly possible, to avoid disappointment. Since it became an international airport to destinations outside Asia around than 10 years ago, the airport has seen an increase of passengers from around 15 million a year to more than 40 million a year in 2018. And with a huge number of travelers choosing Chongqing for their flights to Tibet for the price and convenience, booking early is a must.

Obtain the Tibet Travel Permit before you go

One of the main things you need to consider for a flight to Lhasa from Chongqing is the Tibet Travel Permit. The permit, which is issued by the Tibet Tourism Bureau (TTB) in Lhasa, is the main permit you need for entry to Tibet for your tour. The permit, however, is not one that you can apply for yourself. All travelers to Tibet are required to be on a pre-arranged tour with a registered travel agency, who will provide all the permits that you need for the trip. 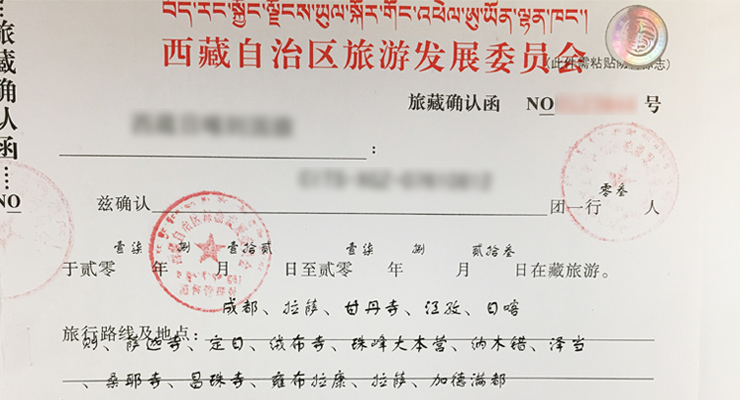 A Sample of Tibet Travel Permit

Once you have booked the tour with your travel agency, they will apply for the Tibet Travel Permit from Lhasa, which can take around 10-15 days to process. Once approved, the permit will be sent to your hotel in Chongqing, ready for your flight to Lhasa.

This permit is not only necessary for entry to Tibet and travel around the region, but you will not be able to board the flight without it. On check-in at the Jiangbei Airport, you will be required to produce the Tibet Travel Permit along with your passport and visa, before your boarding pass will be issued. You will also be asked to show it as you board, along with your boarding pass, when you arrive in Tibet, and at several other points while traveling in the region. So if you are planning a Tibet tour from Chongqing, make sure you book your tour and get your permit before you fly to Chongqing.

Board the flight from Chongqing to Lhasa

Boarding the flight is not one of the hardest things to do, and if you have any experience of airports around the world, you will have no problems. You simply need to make sure that you have all your documents, including the Tibet Travel Permit, with you when you check in and board the flight.

The airport also has its own freeway link to the city, which allows car traffic to reach the airport from the city center in around 30 minutes, even with heavy traffic.

Chongqing is not just a connecting city for travelers to Southwest China. It is also one of the major connecting airports for flights to Lhasa, and is a popular departure location for plateau-bound tourists from around the world. With the airport being a major international and long-haul hub and ten direct flights from Chongqing to Lhasa, this is one of the best options for travelers to Tibet that want to save money on flights but do not want to take the train.

Read More about Chongqing to Lhasa Flight: A Good Way You May Omit to Travel to Tibet by Air

Be the First One to Comment "Chongqing to Lhasa Flight: A Good Way You May Omit to Travel to Tibet by Air"