Kathmandu to Lhasa Flight: Travelling between Kathmandu and Lhasa by Air

In the summer months from May to early October, the number of flights increases to cover the demands of the peak tourist season in Tibet, and conversely, the number drops in winter, when fewer people are visiting the region.

Flights can be booked online, but only if you are traveling alone. If you are traveling with a group that has been collected together by a group tour operator, then you may have to book once you are all together in Nepal, to ensure that you all arrive at the same time.

Why Travel from Kathmandu to Lhasa by Air

Most countries around the world are permitted to obtain a visa for Nepal on entry to the country, and once there your tour operator can arrange your visa and travel permit for getting into and around Tibet.

While Tibet is the land of snows, Nepal is the land of mountains, and the Himalayan mountains that border Tibet and Nepal are some of the most dangerous, remote, and inaccessible places in the world. 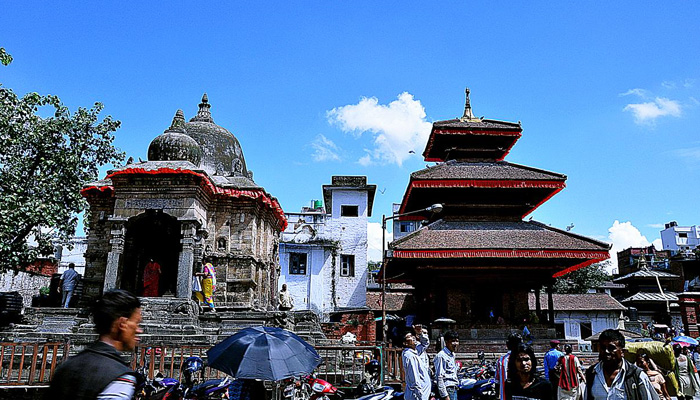 Despite being separated by international borders, the two places have a lot in common, and not just the sharing of Mount Everest. Both places are hugely Buddhist or Hindu, and have very similar traditions, monasteries, and warm, friendly locals.

Airlines with Flights from Kathmandu to Lhasa

Traveling by air is the easiest and most convenient way to get from Nepal to Lhasa, and thanks to the direct flights that are available, it is now even easier. To date, there are only three airlines that run flights from Kathmandu to Lhasa.

Sichuan Airlines operate only three flights per week from Nepal to Lhasa, although they do offer more flights to Lhasa with a change in Chengdu, which seriously extends the flight time. The direct flights are available every other day.

Sichuan Airlines flights leave on Monday, Wednesday, and Friday, and leaves Lhasa at 11:15am to arrive in Nepal at 10:10am. Conversely, the return flight leaves Kathmandu at 11:30am and arrives at Lhasa at 3:10pm.

Air China, obviously, is the largest airline that provides direct flights to Lhasa from Kathmandu, with flights running every day, although at present, the Tuesday flight has been cancelled by the airline until October 15, 2017. If you are not bothered with the flight being direct, they also offer connecting flights to Lhasa through Chengdu, Chongqing, and Kunming.

Air China flights run daily from Lhasa to Kathmandu and depart at 12:10pm, to arrive in KTM at 11:10am (time difference applies). The reverse trip also runs daily, and leaves Kathmandu at 12:10pm, arriving in Lhasa Gonggar international Airport at 4:00pm.

Brand new to offering flights to Tibet from Nepal, Tibet Airlines started operating this route from March, 2017. The flights will originate in Chengdu flying to Kathmandu, via Lhasa, and vice versa, and will also run flights direct from Chengdu to Kathmandu. The first flight departed from Chengdu on March 26, 2017, and the airline now runs two flights a week from Nepal to Chengdu, via Lhasa.

The cost of flights from Kathmandu to Lhasa, and vice versa, can vary due to many contingencies, from flight date, availability, discounted sites, etc. On average, prices normally range from between US$325 to US$700, and it is a good idea to look around, and use the internet search engines for cheaper flights, as they are available online.

Required Documents for Taking Flights from Kathmandu to Lhasa

For anyone traveling from Kathmandu to Tibet, there are certain visa requirements that must be completed before you can even board the plane. Unlike traveling to Lhasa from China, the Tibet Travel Permit is processed at the same time as the Tibet Group Tour Visa, although both need to be obtained through a local Tibetan tour operator, and also require you to have a booked itinerary with a tour group before issue. While they are called “group” visas, they are available for single persons without a group. However, if you are part of a group, it is important to remember that every member of the group will be mentioned on the visa, and all members must depart from Tibet at the same time, from the same place.

The visa is available from the Chinese Embassy in Kathmandu, and takes around four working days to process. Visas are normally for a period of 15 to 20 days, and cannot be extended, so it is a good idea to make sure your tour starts immediately you get the visa.

It is very important not to lose the visa, as you may be asked to produce it at certain checkpoints throughout Tibet, and the Tibet Travel Permit is required if you are traveling outside Lhasa, especially to certain military sensitive areas like Everest. Your guide will obtain the additional permits once you are in Lhasa, and will also require your original passport.

Top FAQs about Flights between Lhasa and Kathmandu

How can I receive my flight tickets if I booked them online?

Online ticket booking, much the same as when a tour operator books it for you, will issue you with what is known as an “e-ticket”, that is sent to your email address, and can be downloaded and printed. Some airlines will also accept the e-ticket when shown on the screen of your smartphone, and will issue your boarding pass.

Can I fly directly to Tibet from my home country?

No. there is no availability of flights direct to Tibet from any international country except Nepal. If you wish to enter Tibet from a country which does not have a direct flight to Nepal, you can take a flight to any major city in China, from where you should be able to get flights or train tickets to Tibet.

Can I fly to other parts of Tibet rather than Lhasa?

However, despite there being multiple airports in the region, flights into Tibet from Nepal only land at Lhasa Gonggar International Airport. Chengdu provide local flights to and from Nyintri, Shigatse, and Chamdo, and Ali airport only operates to Lhasa.

How far is Lhasa Airport from the city?

Lhasa airport is 68km southwest of Lhasa and takes about a one and a half hour drive upstream from Lhasa River. The Lhasa airport highway has been recently renovated.

Can I travel alone in Tibet?

As a foreign visitor, it is required that you are accompanied by a guide from a registered Tibet Travel Operator at all time when traveling outside Lhasa. Touring inside the city of Lhasa is permitted without your guide, as long as you stay within the city center limits.

It is also required that foreign travelers have a private vehicle for travel, as they are not allowed on the public buses that run between towns and cities. The only exception is the local buses that run short distances to specific places such as Mt. Kailash kora or from Rongbuk to EBC.

What is the best way to find cheap flights?

Since there are many sites online that promise you the cheapest flights available, it is best to avoid the more obvious ones that are likely to be hiding charges on top of the quoted price. There are several independent search engines that can find the best prices for flights around the world, and which can, when used properly, help you to save money on the cost of your flights.

Isn’t it cheaper to book well in advance?

While this idea works with many things, with flights, the closer you get to the departure date, the cheaper the flights normally get, except for within less than seven days of the flight. The optimal time frame for getting the cheapest flights is to book between seven and 30 days prior to leaving. The highest cost is normally the six days immediately prior to the flight date.

Compared to travelling from Kathmandu to Lhasa by overland, taking the flight via Mount Everest is faster and especially suitable for those with limited time. But before that tourists need to obtain the required Tibet Travel Permit and Group Tourists Visa. As the leading tour operator in Lhasa with years of experiences, we can help handle your flight ticket, permit as well as arrange tibet tour for you. Just contact us for details.

Be the First One to Comment "Kathmandu to Lhasa Flight: Travelling between Kathmandu and Lhasa by Air"