Geographically, Singapore is well located for easy travel to Tibet. However, there are actually no direct flights to Lhasa from Singapore, and travelers need to transit through cities in mainland China or Kathmandu in Nepal, for their flights to the Tibet Autonomous Region (TAR). The good thing is that Singapore’s Changi International Airport has direct flights to a large number of Chinese cities that have direct connecting flights to Lhasa, so the connections are not as hard as you might think.

Fly from Singapore to Tibet via Mainland China

There are numerous flights daily from Singapore to a huge number of Chinese airports, including Chengdu, Chongqing, Beijing, Shanghai, Guangzhou, and even Xining, to name a few. Having a high number of connecting cities for the flights to Lhasa means that you can usually find a good deal for the flights to get you to Lhasa in plenty of time for your tour to start. And for those few that mean you have a little wait, these cities offer some of the most exciting attractions in China.

Flights from Singapore to Chengdu run direct only three times a day, but do give you a good flight of just 4 hours 30 minutes to the Sichuan provincial capital. The flights from Singapore to Chengdu cost from around 185 US dollars per person for economy flights. However, with the last flight to Lhasa from Chengdu departing at around 2:30 pm, you are likely to need to wait for the connecting flight until the next morning.

On a positive note, as there are around 14 connecting flights from Chengdu to Lhasa, you do have a wide variety to choose from. The flights on to Lhasa from Chengdu take around 2 hours 30 minutes, give or take, and cost from as little as 155 US dollars per person for the one-way economy flights. And with the first flights departing as early as six in the morning, you can be in your hotel in Lhasa in time for a little late breakfast. 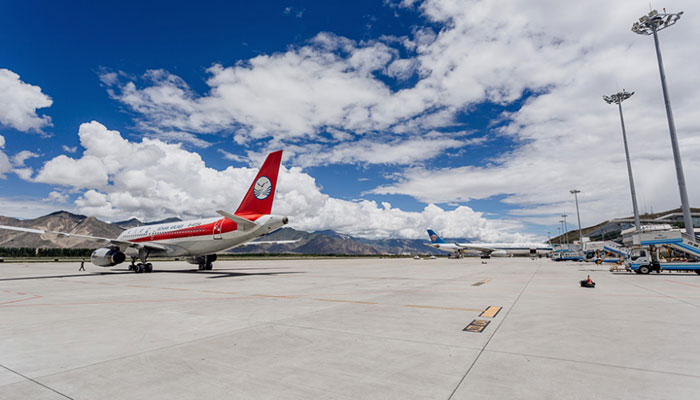 The flights from Chengdu to Lhasa take around 2 hours 30 minutes.

Flights from Singapore to Chongqing only run twice a day, at 7:00 am and 2:35 pm, and take from 4 hours 35 minutes to 5 hours to reach the municipality in China. The flights range from as little as 223 US dollars per person for the one-way economy flights, which are offered by Silk Air and Chongqing Airlines.

The nine direct flights to Lhasa from Chongqing mean that it is not hard to catch a connecting flight for the morning flight from Singapore, but the afternoon flight arrives too late to catch a connection to Lhasa. You will need to wait until the following morning for the first available flight to Tibet, so you should plan your trip accordingly.

While there are four decent direct flights from Singapore to Beijing that run the route direct to the Chinese capital daily, there are only two connecting flights to Lhasa, which both depart from the city to the plateau in the morning. However, since two of the four flights from Singapore arrive very early in the morning, at 5:45 am and 7:15 am, you can make your connections from these flights on the same day to Lhasa. For the other two flights, you will be required to stop overnight to catch the connecting flight to Lhasa. 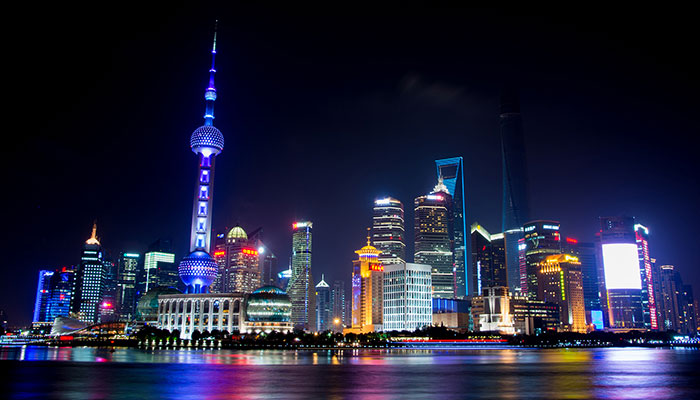 Stop overnight in Shanghai to catch the connecting flight to Lhasa.

The flights from Singapore are much more frequent, with 12 daily direct flights to Shanghai’s Pudong International Airport. The flights start arriving in Shanghai from Singapore at around four in the morning, and the last flight of the day arrives at around 10:45pm. The flights cost from around 130 US dollars per person for the economy flights, but can cost as much as 400 dollars each, depending on the time of year and the airline.

Shanghai only has one direct flight to Lhasa, which actually has a short hour-long stopover in Xi’an along the way. The total travel time for the flight from Shanghai to Lhasa, including the stopover, is around eight hours, so this is not the fastest flight to Tibet from China. The sole flight with China Eastern Airlines departs from Shanghai’s Pudong International Airport at 6:45 am daily, and arrives in Lhasa at around 3:15 pm. The flight is also not cheap, starting at around 425 US dollars per person. 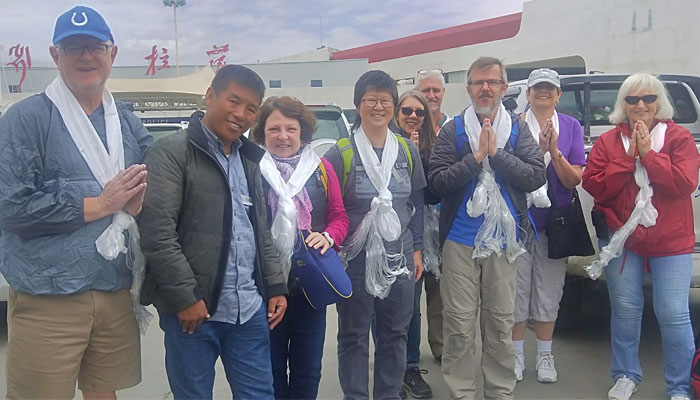 This is because there is only one daily direct flight to Lhasa from Guangzhou, and even that is not as direct as it could be. The “direct” flight to Lhasa from Guangzhou actually stops briefly in Chongqing, before continuing on to Lhasa. Departing at 8:10am daily, the flight takes around six hours to reach Tibet, with a one-hour stopover in Chongqing.

The flights from Singapore to Guangzhou can cost as little as 95 US dollars for the four-hour flight, which is extremely good value for money. However, the flights from Guangzhou to Lhasa normally cost from around 320 US dollars, which really offsets the low cost of the flight from Singapore. There are other flights to Lhasa from Guangzhou, which are indirect flights through either Chengdu or Xi’an, but these are more expensive, and take up to eight hours.

There are no direct flights from Singapore to Xining in Qinghai Province, but you can get a connecting flight via Shanghai, Chengdu, Guangzhou, Beijing, Shenzhen, and several other airports in China. This does mean that your trip to Xining from Singapore can take from 19 hours to as long as 26 hours, depending on the airlines and routes used. However, there is an advantage to flying indirect to Xining in Qinghai Province, as it is one of the shortest air routes to Lhasa, and the start of the famous Qinghai Tibet Railway.

Flights to Lhasa from Xining run six times a day from the Qinghai capital, and cost from as little as 135 US dollars per person for the one-ay economy flights. Travel time is also low, resulting in a flight time of about 2 hours 20 minutes, so the trip is short and easy.

The alternative to the flights from Xining is the famed Trains to Tibet, which start here in Xining at the beginning of the incredible Qinghai Tibet Railway. Stretching for around 1,972 kilometers across the plateau, the train from Xining to Lhasa takes around 21 hours to reach the Tibetan capital and costs from as little as 74 US dollars for the sleeper berths. 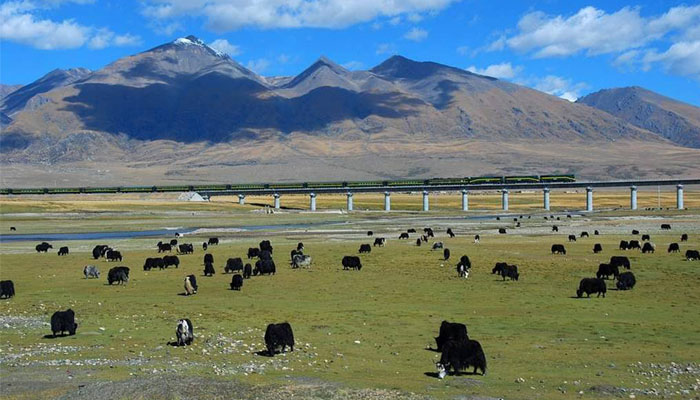 You can also take the Qinghai-Tibet Railway to get to Tibet for the stunning scenery along the way.

Fly from Singapore to Tibet via Nepal

If you are planning a Tibet tour via Nepal, then you have only one direct flight to the Himalayan country from Singapore. The flight, which departs daily at around 6:55 pm from Changi International Airport, takes around 5 hours 30 minutes to reach Kathmandu’s Tribhuvan International Airport, and costs from around 410 US dollars. You will have to stop in Kathmandu to process your visa for China. Once your visa is processed, you can head on to Tibet on the Kathmandu to Lhasa flight, which run daily to the plateau capital. The flights take around 90 minutes and cost from around 230 US dollars.

Permits to Prepare for Flying from Singapore to Tibet

If you are planning your lifetime Tibet tour from Singapore, then you will need to have a valid Chinese Entry Visa in order to book the tour. You will also need to have the Tibet Travel Permit, for entry to Tibet and travel in the area of Lhasa, which we will arrange after you have booked the tour with us. If you are entering from Nepal, then you will need the Chinese Group Visa instead of the Standard Entry Visa, which will be processed by our representative once you arrive in Kathmandu.

Flights to Tibet from Singapore are easily obtained though both mainland China and Nepal, which makes Singapore a good gateway city for travel to Tibet from other countries outside Asia. Flight times to both China and Nepal are good, and the cost of many of the flights are low enough to make them available, even for budget travelers.