How to Take Flights to Tibet from US?

With no direct flight to Tibet from the United States, the only option is to take a connecting flight to get to the Tibetan plateau. Connecting flights can run through either mainland China, which has a number of cities with international flights from the United States, or to Nepal, which is the only country with international access to Tibet. Read on to check the latest updates on flights to Tibet from US.

Fly from US to Tibet via Mainland China

Flying to mainland China to get a connecting flight to Tibet is the easiest and simplest option for most travellers to the Tibet Autonomous Region (TAR). You can get direct flights from a number of US cities to China, including Beijing, the Chinese capital, Shanghai, and Chengdu, in Sichuan Province. All of these cities, among many others, have direct flights to Tibet’s Lhasa Gonggar International Airport daily.

Fly from West Coast to China

There are several cities on the West Coast of the United States that have direct and indirect flights to mainland China. Direct flights depart from San Francisco, Los Angeles, and Seattle to Beijing, Shanghai, or Chengdu, depending on the departure city. You can also get indirect flights between all of the above locations, as well as from Las Vegas and San Jose, which have indirect flights to both Shanghai and Beijing.

The durations of the various flights range from 11 hours to as long as 28 hours, and costs vary from as little as US$ 261 per person to as much as several thousand dollars. This price can depend on the flight dates, carrier, and flight class.

Fly from Midwest to China

Flights from the American Midwest are also available for travel to mainland China. However, the only direct flights are from Chicago to Beijing, with all others requiring at least one stop along the route. Flights run from both Chicago and Detroit to China’s major destinations of Beijing and Shanghai. Other indirect flights run to Chengdu, Guangzhou, and other cities in China, but take a lot longer, with some durations reaching up to more than a day.

Chicago has the best options for flights to China, with their flights to Beijing taking just under fourteen hours and costing the least of all the flight options from the American Midwest.

Fly from East Coast to China

When it comes to flights from the East Coast of the United States, such as New York, Washington DC, and Atlanta in Georgia, you have fewer options for direct flights to mainland China. In fact, from the cities listed below, there are actually no direct flights to China, and you will need to select the best options for the indirect flights to the major cities of Shanghai, Beijing, Guangzhou, and Chengdu.

The flights from the East Coast range from as short as 16 hours to reach Beijing to as long as more than 24 hours, with some of the cheaper indirect flights taking as long as 36-48 hours to reach their destinations. Prices of the flights vary greatly too, and while some flights can be found for under 400 US dollars, most cost from 400 dollars to 600 dollars per person, depending on the departure and arrival locations.

Once you are in mainland China, you have a wide choice of airports from which to take your flight to Lhasa, the capital of Tibet. There are generally four main airports that are popular for flights to Lhasa, which include Beijing, Chengdu, Shanghai, and Guangzhou. As major destinations in China for flights from the United States, these four airports are often the most used for those heading off to Tibet once they arrive in China. 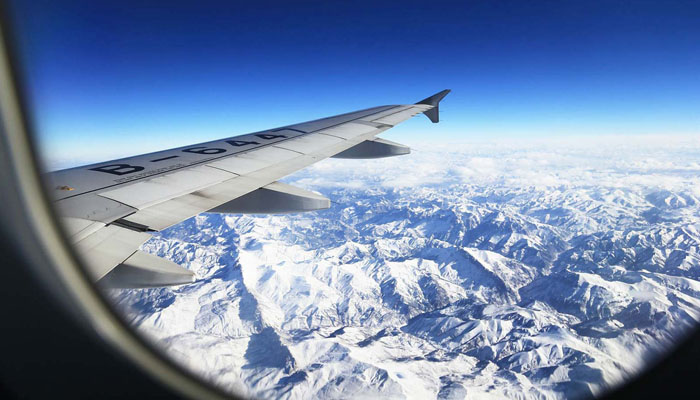 Flight to Tibet from Mainland China

While Shanghai and Guangzhou are both good departure locations for flights to Tibet, Beijing and Chengdu are by far the better options, as they not only have more flights, but are both generally shorter in duration. Beijing has two daily flights to Tibet, which take around four and a half hours to reach the plateau capital, at a cost that starts at around 426 US dollars per person.

Chengdu has the most flights to Lhasa of any airport in China, and has become the most popular departure location for flying to Tibet. With 14 daily flights to Lhasa, and a travel time of just 2 hours 15 minutes, the short flights from Chengdu to Lhasa are the best option for flying to Tibet. And with their low cost, from only 155 US dollars each, you can be sure that they are value for money too.

Fly from US to Tibet via Kathmandu, Nepal

Unfortunately, there are no direct flights from the United States to Nepal’s Tribhuvan International Airport in Kathmandu. Indirect flights to Nepal run from more than two dozen airports across the United States, including New York, Los Angeles, San Francisco, Chicago, Dallas, Washington DC, Atlanta, and Seattle, to name a few.

Due to the indirect nature of travel to Kathmandu from the United States, flights can generally take from as little as 18 hours to as much as 66 hours, depending on the flight, the airline, and the departure location. The cheapest options for flights from the US to Nepal range from around 600 US dollars per person to as much as 1,100 dollars each, depending on your flight and airline. 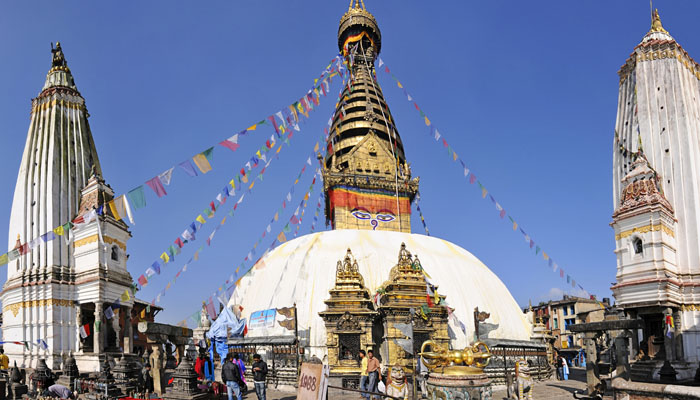 You can Visit Kathmandu Swayambhunath Stupa before your Tibet tour

The indirect flights have a variety of stopover locations, depending on your flight and departure location in the US. Flights to Nepal from the US generally have connections to be made in such places as Doha in Qatar, Istanbul in Turkey, Hong Kong, and Dubai in the United Arab Emirates. Connection waiting times vary from airport to airport and from one carrier to another.

But, the flights from Kathmandu to Lhasa can make it quite convenient for you to get to Tibet from Nepal, on the other hand. It is the only one direct international flight to Tibet and takes only about 1 hours and a half. For tourists who do not want to transfer via the way from China, or has interested in exploring the mystery of Nepal. This route is also a good choice.

Permits for Travelling to Tibet from US by Flight

As well as needing your passport, there are other documents you will need in order to get into Tibet for your lifetime tour of the plateau region. For those traveling through mainland China, you will need to have a Chinese Entry Visa, which you can apply for in person at any Chinese Embassy, or via the US Postal Service registered mail system. For those entering from Nepal, you need to have a Nepal Entry Visa, which you can arrange on arrival, and a Chinese Group Visa, which we will arrange for once you arrive in Kathmandu.

For both entry points, you will need to have the Tibet Travel Permit, the main permit required for traveling into Tibet and around Lhasa. We make the application for this permit on your behalf once you have booked your tour with us, and the processing time can take up to 15 days. Other required permits, such as the Alien’s Travel Permit and the Military Permit, are obtained by us on your behalf, depending on where you are traveling in Tibet.

While you may not be able to get direct flights to Tibet from anywhere in the United States, you do have a huge number of options for direct flights to China and connecting flights to Nepal. And with such a wide range of possible travel routes to get to the Tibetan capital for your epic adventure, finding the right flight for you is not going to be a hard choice.

Read More about How to Take Flights to Tibet from US?

Be the First One to Comment "How to Take Flights to Tibet from US?"