How to Plan a Chengdu to Tibet Tour?

One of the best ways to travel to Lhasa is from Chengdu, in Southwest China’s Sichuan Province. The capital of the province, Chengdu is located in the eastern central part of the province, in what is widely known as the Sichuan Basin. At an altitude of just 500 meters above sea level, Chengdu is the exact opposite of Lhasa, which lies on the Tibetan plateau at an altitude of 3,656 meters above sea level. The Tibetan regional capital, Lhasa is considered to be the heart of Tibetan religion and culture, and sits in the Lhasa River Valley, in the southern part of the Lhasa Prefecture-level City.

While there are other cities that are closer to Tibet than Chengdu in terms of travel, such as Xining, Chengdu is still one of the most popular places from which to depart for the plateau for foreign tourists. Not only does it have a wealth of sites to visit whilst waiting to head for Tibet, but it is one of the main transport hubs in Western China. From Chengdu, you have a choice of three ways to get to Tibet: by flight direct to the Lhasa Gonggar International Airport; by car traveling overland along the Sichuan Tibet Highway; and by train taking the Tibet Trains through Xining and along the Qinghai Tibet Railway.

How to travel from Chengdu to Tibet?

Chengdu to Lhasa by Train

A route that is constantly rising in popularity with international tourists, the trains to Tibet from Chengdu are a great way to get to the plateau. The trains depart every other day, and take around 36 hours to make the journey to Lhasa. The route of the train is not direct, and it travels through Lanzhou, Xining, Golmud, and Nagqu to get to the Tibetan capital, 3,360 kilometers from the start point in Chengdu. However, there is a straighter route to Lhasa from Chengdu currently under construction which will reduce the travel time to Tibet. 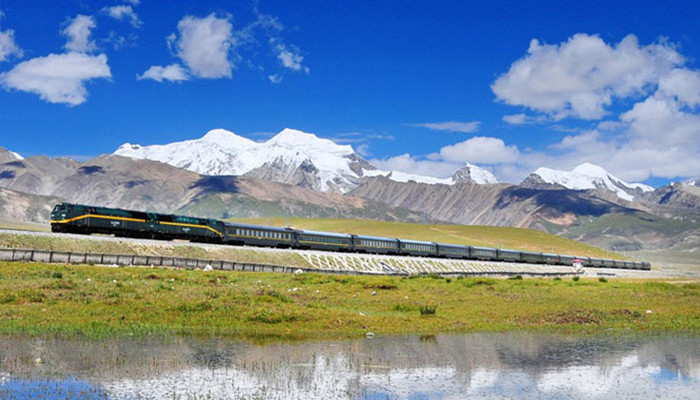 Taking a Tibet train to Lhasa from Chengdu gains much popularity among tourists.

Chengdu trains to Tibet are a great option for budget travelers and those that enjoy train journeys, and the trains from Chengdu are among the cheapest of all the trains to Lhasa from mainland China, with sleeper berths starting at just 94 US dollars per person. And the other advantage of taking the train is the amazingly spectacular views of the Qinghai Tibet Plateau as you cross the high mountains and travel south towards Lhasa.

Chengdu to Lhasa by Flight

The most popular way to travel to Tibet is still by flight to the Lhasa Gonggar International Airport, and flights from Chengdu are among the most popular departure destinations in China. With around 13 direct flights daily from the Chengdu Shuangliu International Airport to Lhasa, tourists have a variety of choices for flying to the Tibetan capital.

Chengdu to Lhasa by Road

If you are really looking for adventure, then a road trip to Lhasa by car is the way to go. There are two options for traveling by car overland to Lhasa, and you can choose from the Northern Route or the Southern Route, depending on your preference. The Southern Route is the more popular, and most scenic, and travels west from Chengdu, through Kangding, Xinduqiao, Litang, Markam, Zogang, Ranwu, and Nyingchi to get to the Tibetan capital. 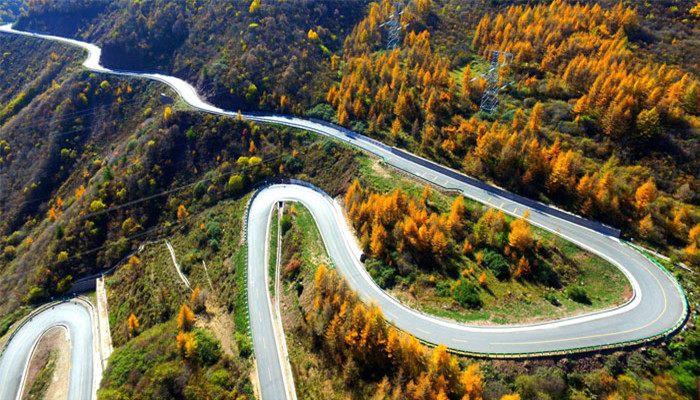 The winding road of G318 Highway from Chengdu to Lhasa is kind of adventurous to many.

An immense journey of 2,149 kilometers, the route to Lhasa along the Southern Route follows the G318 National Highway to Lhasa, which is counted as one of the most dangerous roads to drive in China for those that are not experienced drivers. An overland tour to Lhasa from Chengdu normally requires you to have a driver and all your documents processed in advance, and gives you the advantage of traveling to places that you would not normally get to on your average Tibet tour.

Chengdu to Lhasa by Bike

While driving in a car along the G318 to Lhasa is an amazing adventure, taking a bicycle along this awesome road is the most epic journey you could attempt. Cycling from Chengdu to Lhasa has become a popular way for bike enthusiasts to travel to Tibet, and taking on this epic adventure does require you to have a good level of physical fitness. The route is normally done along the Southern Route of the Sichuan Tibet Highway, covering more than 2,100 kilometers, and takes up to three weeks to complete.

The road takes you through some of the most beautiful countryside in western Sichuan and eastern Tibet, traveling through the ancient region of Tibet known as Kham, one of the four original regions of the former Tibetan Empire. The cycling tour also gives you the advantage of being able to see all of the amazing scenery along the way without interference and obstructions, including Mount Minya Konka, Xinduqiao, the Yangtze River Grand Canyon, Ranwu Lake, and Nyingchi.

How to Apply for Tibet Travel Permit from Chengdu?

The main permit you will need for traveling to Tibet is the Tibet Travel Permit, which can only be obtained after booking a pre-arranged tour with a registered Tibet tour operator. When you book your tour with us, we will use a scanned copy of your passport and visa to make the application on your behalf. The application takes around 15 days to process, and once it is approved, we will deliver the permit to your hotel in Chengdu ready for your expected departure date.

When is the Best Time to Travel from Chengdu to Tibet?

Taking the trip from Chengdu to Lhasa is best done in certain seasons, as there are detrimental factors to take into consideration for certain times of the year. April to June and September to November, are the best times to travel this route, as the weather is ideal for travel and trekking. With little rain and winds, and no snow to mention, it is also the best time to travel along the highways from Chengdu to Lhasa, which can be dangerous in the cold winters and the hot monsoon season. 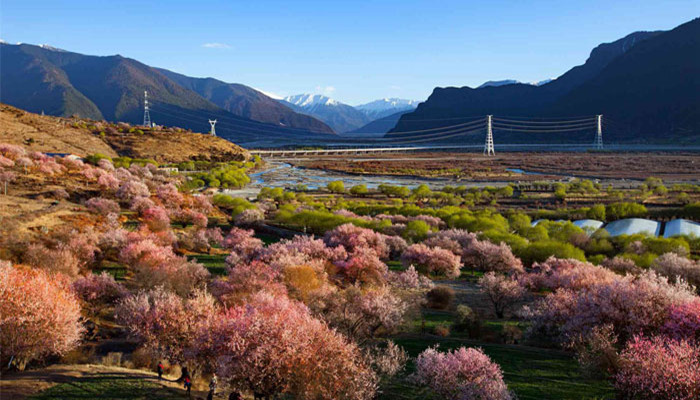 One can see beautiful Nyingchi with peach blossom in spring while drive from Chengdu to Lhasa.

The peaks season, from June to September, is ideal for those that are more interested in having warmer weather in Tibet for their tour, although the crowds of tourists in Lhasa can be heavy and busy. The winter season, from December to March, is actually the best time for budget travelers to Tibet, as there are fewer tourists and the costs of hotels, trains, flights, etc., are much cheaper.

Join in a Chengdu to Tibet Tour with Us

All travelers to Tibet are required to be on a pre-arranged tour with a registered Tibet Travel Agency, and as one of the oldest tour operators for Tibet, we at Tibettour.org can offer you the best Tibetan experience possible. We have been operating tours to Tibet since 2002, and our intense passion for travel and our desire to showcase our home to international tourists is one of the main reasons we are still in business after almost 17 years.

Over the years, we have taken more than 3,000 international travelers to the awesome Tibetan plateau region, giving them one of the best possible experiences in Tibet with authentic Tibetan guides and drivers who each have more than ten years experience in their fields.

Our amazing tours from Chengdu to Lhasa are guaranteed to give you a wide range of awesome services, including well-designed itineraries that will showcase the best of Lhasa and Tibet in general; free processing of all the permit applications required for your tour; the best budget tours on the market, guaranteed to depart on the chosen date for our Small Group Tours no matter how many people are booked; a maximum of just 12 people per tour for our Small Group Tours; and visits to authentic Tibetan sites and visits with real Tibetans for that ultimate Tibetan cultural experience.

If you are really looking for the best experience of Tibet and its devoutly religious people, then we have the tour for you. And if you are more inclined to choose your own tour destinations in Tibet, we can cater to your needs and design a custom private tour just for you or your friends and family. What is more, a tour to Tibet with us is supporting the local economy, using only local guides and drivers who live, work, and play in the area, and using only local businesses for our other requirements whilst in Tibet. And by your supporting the local economy of Tibet through us, you will be helping to make the lives of many Tibetans much better.

A trip from Chengdu to Lhasa is one of the most spectacular ways to get to the Tibetan plateau and explore this land of snows and mountains, lakes and valleys, and awesome Tibetan Buddhist monasteries. Whether you take the train or fly, or decide to travel overland by car or bike, departing from Chengdu is one of the best ways to get to Lhasa. And while you are waiting in Chengdu for your trip to start, or if you have a couple of days to spare, you can visit some of the most amazing attractions in Sichuan Province, including those cute and cuddly giant pandas that are the most iconic symbol of China itself.

Be the First One to Comment "How to Plan a Chengdu to Tibet Tour?"