Which One is Better? Get to Tibet by Train or Flight?

A common concern among travelers to the Tibet Autonomous Region (TAR) is which way to get there. Travel to Tibet can be done by either flight or by using the famous Tibet Trains, and each has its own popularity among tourists to the plateau region. Some prefer to fly, even if they have time for taking trains, while others prefer the tranquility and peaceful travel by train, and would recommend it as the best way to travel. However, as both options have a wide range of positive and negative points when it comes to traveling to Tibet, deciding on which means of transport to use can be a hard choice for tourists to the Roof of the World.

Both Flight and Tibet Train Required for Better Experience

Both flight and Tibet train are needed during peak travel season

If you want to get the best of both worlds, then the better experience for travel to Tibet is to use both flight and train, mixing both means of transport into an unforgettable journey to the plateau. The peak season for tourism in Tibet is the busiest time of year, and thousands of visitors pass through the train station and airport on their way to the Tibetan capital of Lhasa. This busier period means that both trains and flights are utilized to their fullest capacity to ensure all tourists traveling to Tibet can get there on time. And in the peak period of Tibetan tourism, it can be very hard to get train tickets from the major cities in China, limiting your options for taking the trains. However, there are ways you can get around this.

Option 1: Fly to Xining and then take Tibet train to Lhasa

The first option for combining flights and trains is to take a flight to the provincial capital of Qinghai Province, Xining, and then join the train that departs from there for the plateau capital. Trains depart from Xining daily, and run along the famous Qingzang Railway all the way to Lhasa. In fact, all trains to Tibet pass through Xining on their way to Lhasa. This means that you have a better chance of being able to book your ticket from Xining to get to Lhasa than from any of the other six departure locations in China. 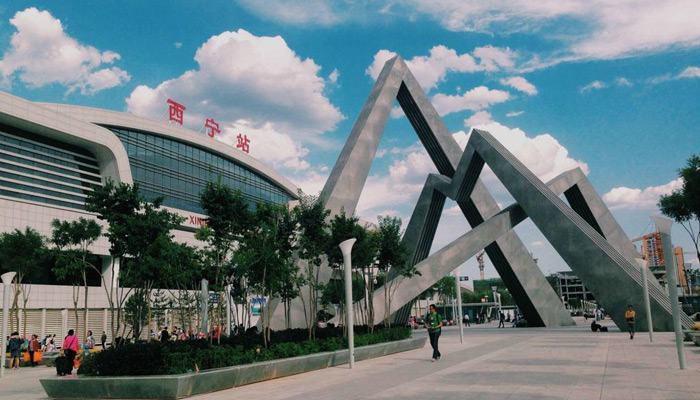 Xining Railway Station offers the most frequent trains to Tibet.

The train from Xining to Lhasa also has the shortest running time of train ride to Tibet, compared to other departure cities. Instead of long time to spend onboard train, you can enjoy the best of the scenery alongside the Qinghai Tibet Railway, within no more than 24 hours.

It is also easier to get flights direct to Xining from most of the major cities across China, and travel time ranges from as little as an hour to as much as 3-4 hours, depending on where you are flying in from. You have more chances to choose your flight for flexible time or budget price. With the reduction in time for travel from the major departure cities to Xining by flight, you can also cut down your total travel time.

Option 2: Enter Tibet by Train and exit by flight or vice versa

Another way to utilize both train and flight for your trip to Tibet is to take one means of transport to get in and another to get out. A commonly-used option for travelers, taking the train for only one of the journeys, either into or out of Tibet, can help to make your travel easier and a little faster overall. 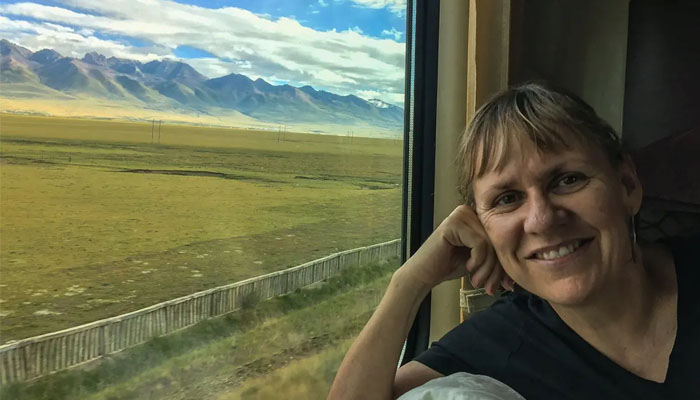 For those that are limited on time to get into Tibet, taking the flight to Lhasa and then returning to mainland China by train is the ideal option. You can get to Tibet a little faster, and enjoy your tour, yet still benefit from the stunning views that you get from the train by taking the railway route back to your destination in mainland China. This is also an ideal option for those that are restricted in their travel options. Alternatively, if you have the time, you can take the train to Tibet from one of the seven gateway cities, and then fly back from Lhasa, reducing the overall travel time once again.

What to Expect If I Get to Tibet by Train?

Travel by train does have its advantages and disadvantages, and taking the trains to Tibet can be a better way to travel for some people.

One of the major benefits of taking the trains is the view outside of the windows as you cross the Kunlun and Tanggula Mountains and steam down across the plains and prairies to Lhasa. This staggering view of the splendid natural scenery of the northern areas of Tibet and southern parts of Qinghai Province is one of the best views that you will find on any train anywhere in the world. The sheer beauty of this almost uninhabited landscape, with its high mountains, shimmering lakes, vast open prairies, stunning scenery, and awesome wildlife makes the train journey to Tibet well worth taking. 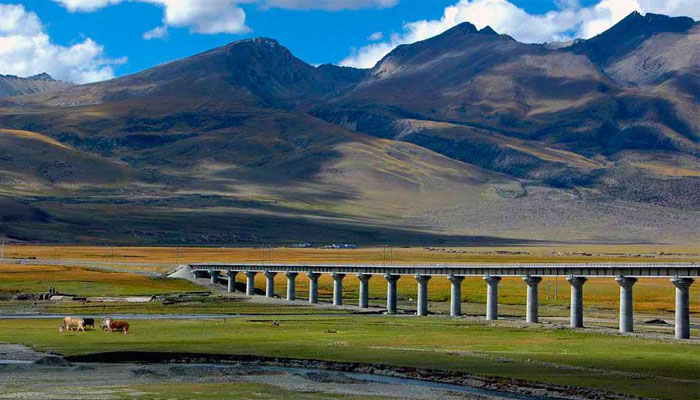 The trains are also much cheaper than the flights from the same departure city, which means you can make a rather large saving on your transport costs to Tibet. On average, the cost of the trains is normally less than half of the cost of a single economy flight, even if you opt for the most expensive seat in the first-class soft sleeper cabins.

This is actually a misconception, unless you are actually traveling to Lhasa from Xining having already spent at least a day or two in the Qinghai capital acclimatizing. If you spend some time acclimatizing to the intermediate altitude of Xining, at 2,275 meters, it can make the acclimatization in Lhasa a little easier.

However, in general, traveling by train to Lhasa from anywhere else does not aid in acclimatizing to the altitude of Lhasa. The trains are pumped with oxygen after leaving Golmud and climbing to the plateau to make the journey more comfortable for travelers. So you should feel almost no effects of the higher altitude until you disembark in Lhasa and start to breathe the thinner atmosphere.

4)Long time to take before arrive in Lhasa

With the shortest train to Lhasa taking around 21-22 hours, and the longest taking more than 53 hours, taking the trains to Tibet is a long and epic journey. No matter where you depart from in mainland China, it takes a longtime to travel to Tibet by train, with distances ranging from just under 2,000 kilometers to almost 5,000 kilometers from the furthest departure station.

What to Expect If I Get to Tibet by Flight?

Flying also has its benefits, not the least of which is the reduced travel time if you are in a hurry or short of time.

There are non-stop flights to Lhasa from more than two dozen locations across mainland China. And with flight times ranging from 2 hours to 8 hours, you have a wide range of flights to choose from. Non-stop flights are a benefit for shorter travel times, as they run without stopping to Lhasa, and can get you there faster than any other means of transportation. However, the direct flights are often more costly. 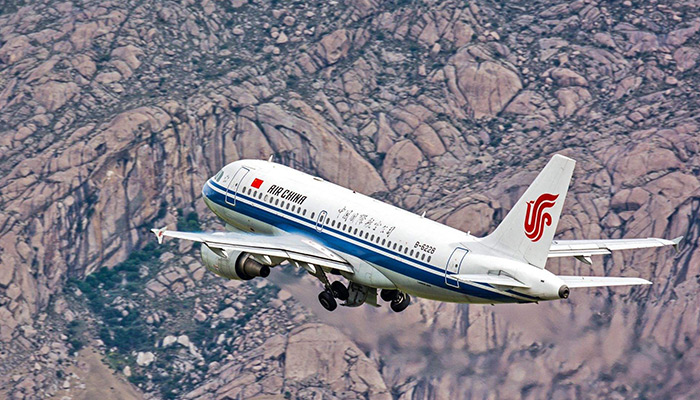 Getting to Tibet by flight have its benefits.

Flying into Tibet actually means you have two options for which direction to come from. Flights not only depart from all across mainland China on a daily basis, but you can also fly direct to Lhasa from Kathmandu in Nepal. Nepal is the only country in the world with direct international flights to Tibet. And with flights taking just 90 minutes, which is faster than any flight from mainland China, traveling through Nepal is definitely a wise option.

3)Flying to other regions of Tibet is available

Tibet currently has five airports that accept flights from mainland China, though they are often limited in where you can fly from. Aside from the main Lhasa Gonggar International Airport, the only international airport in Tibet, you can fly from certain airports in mainland China to Nyingchi Mainling Airport for easier access to southeast Tibet; to Qamdo Bamda Airport in Bamda Village for access to the Chamdo region of Tibet; to Ngari Gunsa Airport in Shiquanhe for access to Ngari Prefecture and faster access to Mount Kailash; and to the Shigatse Peace Airport for easier and faster access to Shigatse and Mount Everest.

While the flights to Tibet are faster and more convenient, they are also much more expensive. Costs of the flights range from 200-300 dollars per person up to as much as more than a thousand dollars per person, depending on where you are departing from. The higher cost of running airlines makes the flights the more costly option for travel to Lhasa, and not a good idea for budget-minded travelers.

Travel to Tibet can be easily done by both flight and train, and the means of transport you choose is entirely up to you. For faster travel, the flights are better, while for stunning scenery and relaxing atmosphere, trains are the way to go. However, neither can help you to acclimatize more easily to the altitude of the plateau, and neither reduces the risk of getting altitude sickness once you arrive. Ideally, for the best experience overall, it is wise to combine both methods of transportation to Tibet, so you can enjoy a much better all-round experience of your trip to the Roof of the World.

Read More about Which one is better? Get to Tibet by Train or Flight?

Be the First One to Comment "Which One is Better? Get to Tibet by Train or Flight?"