How to Get to Tibet from China

Tibet, which lies in the western part of China, is one of the most popular destinations in Southeast Asia in recent years for both international and domestic travelers. This beautiful land is filled with high snow-capped mountains, stunning shimmering lakes, and more Buddhist monasteries than you can count. An uninformed traveler may think it is almost impossible to reach this desolate and isolated land, but they would be so wrong. With three different methods of travel enabling you to reach Tibet from China, it has never been easier to travel to the roof of the world.

Get to Tibet from China by Train

Why Get to Tibet by Train?

When it comes to train travel to Tibet, there are seven departure locations across China that have direct trains that run almost daily to Lhasa. Trains depart from Guangzhou, Beijing, Shanghai, Chengdu, Chongqing, Lanzhou, and Xining, as well as being able to catch two of the trains as they pass through Xi’an en-route to Tibet. The trains take from 22-53 hours to reach the plateau. While that may appear to be a very long journey, the stunning sights of the boundless prairies, bordered by absolutely astounding mountain ranges, makes the long trip extremely worthwhile. 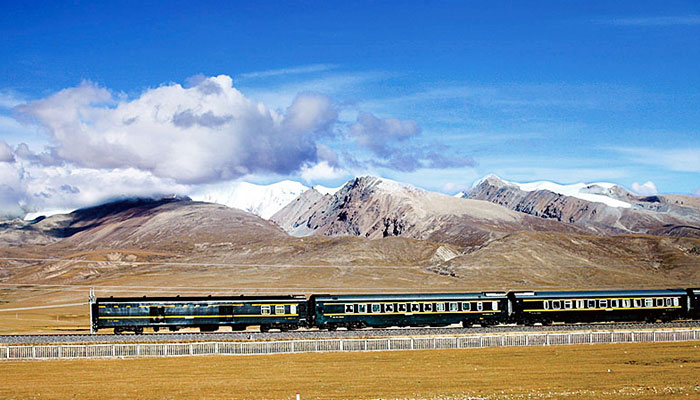 Get to Tibet by train

The stunning scenery is only one of the amazing advantages of traveling to Tibet by train. The trains are also a lot cheaper than any other means of transportation to Tibet. From each of the seven gateway cities, the most expensive ticket class on Tibet trains costs less than half of the cost of an economy flight to Tibet. So if you are concerned about the cost of the trip, you can reduce the overall cost by spending a little more time traveling in comfort and style.

One of the myths of train travel to Tibet is that you will acclimatize to the altitude gradually as the train travels higher. This is not accurate. If you depart from Xining, at 2,275 meters above sea level of the intermediate level, altitude sickness can start to affect you. So A day spent in Xining can help you to acclimatize to the altitude of Lhasa quicker and more easily. There is no guaranteed way to prevent altitude sickness, and almost all tourists to Tibet feel some of the symptoms.

Get to Tibet by Train from Beijing, Shanghai, Chengdu, Xining, Guangzhou

Totally, there are eight cities from mainland China offering Tibet trains to Lhasa. The major popular routes are from Beijing, Shanghai, Chengdu, Xining, and Guangzhou. Check the schedules for the trains to Lhasa as follows:

Trains from Beijing are the most popular route to take to get to Tibet, traveling from the Chinese capital, far in the east of the vast country. While not the longest journey to Lhasa, the trip from Beijing takes more than 40 hours, spent over three different days, and is a spectacular way to see the expanse of China, traveling through eight provinces to reach the plateau region.

The route from Shanghai, which takes a little longer than from Beijing at around 46 hours, is another expansive route that gives you an opportunity to travel the breadth of the nation to reach the plateau. And as one of the trains that runs through Xi’an, it is possible in the low season to depart from the famous former Imperial capital to reach Lhasa.

From Guangzhou, the longest trip of all, the trains take a little over 52 hours to reach the plateau, which is done over the course of three days. The longest distance of any train to Tibet in China, the Guangzhou trains also pass through Xi’an on the route to the Tibetan capital.

The trains from Chengdu are the most popular option for travelers to the plateau from Southwest China, and allow tourists to visit the pandas in the city before departing. A trip of 36 hours over three days, this is one of the best trips to Lhasa by train from China.

Xining is the shortest distance from Lhasa of all the gateway cities to Tibet, and the trains from this Qinghai provincial capital take just over 21 hours to reach Lhasa. Lying on the plateau already, Xining is also the ideal place to depart from for those that want to acclimatize to an intermediate altitude before reaching Lhasa.

Your Tibet Train Ticket in Advance

There are three types of tickets for the trains to Tibet: soft sleepers, hard sleepers, and hard seats. The soft sleeper berths are the more expensive first-class option, and the cabins have only four berths with lockable doors for more privacy. The hard sleepers are the second-class option, and a popular option for budget travelers. The hard seats are not hard either, but are small with little legroom, so are not the ideal option for international travelers to Tibet. Thus, it is the cheapest third-class option for getting to Tibet by train. 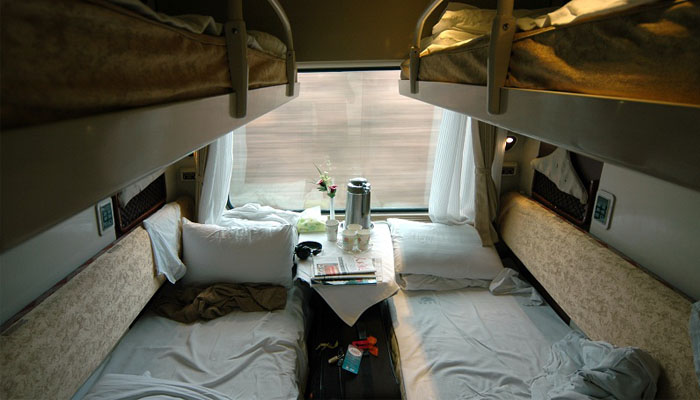 The tickets for the trains can be bought at any station in China, or through the website of the railways, as well as through certain travel agencies. Buying them personally at the stations may be too late to obtain them for your date of travel, and unless you read Chinese, and have a Chinese-based payment method, booking them online can be a daunting task.

In order to board the trains to Tibet, you need to have obtained a copy of the required Tibet Travel Permit. The permit is required for all international tourists to Tibet, and can only be obtained after booking a pre-arranged tour through a registered Tibet travel agency. Once you have booked your tour with us, we will procure your permit and send it to your hotel in China, ready to use to board your train to Tibet.

Get to Tibet from China by Flight

Flying is the most convenient and fastest way to reach Lhasa, though it is a lot more expensive than traveling by train. Flights depart from more than two dozen cities across China to Lhasa almost daily. Some popular routes include Beijing, Chengdu, Shanghai, Guangzhou, Chongqing, Xining, Xi’an, and Kunming etc.

Flights to Tibet are not just more convenient, you also have a much wider choice of departure locations in mainland China from which to travel, which means that you do not have to travel far if you are touring in an area of China that does not have a nearby train departure city.

While the flights from Xining in Qinghai Province are the fastest, the most popular are Beijing, Chengdu, and Xi’an, which are also hugely popular cities for international tourists. Xi’an also has a good number of daily flights to Tibet, though for the most options on flights to the capital on the plateau, Chengdu is the best choice for most travelers, with around 14 direct flights to Tibet every day.

Get to Tibet from China by Overland

There are also four overland routes to Tibet, along the four main highways to Lhasa. While overland travel is not the most popular way of getting to Tibet, it is an outstanding adventure, and one that you will never forget.

The first highway to Tibet is the Qinghai Tibet Highway, which was once the main route into Tibet from mainland China for travelers and goods. Starting in Xining in Qinghai Province in northwest China, the road takes you alongside the Qinghai Tibet Railway, passing through Golmud before heading up to the heights of the plateau. The route crosses the Kunlun Mountains and the Tanggula Mountains, as well as the vast plains of the Kekexili National Nature Preserve and the immense Changtang Grasslands in Northern Tibet. After entering Tibet, the road heads south through the Nyenchen Tanglha Mountains to reach Lhasa, the Tibetan capital.

The Sichuan Tibet Highway starts in Chengdu, in Sichuan Province, and heads west to Lhasa on a route that covers more than 2,000 kilometers. Passing through the eastern Himalayas into Chamdo and Nyingchi, the Chengdu to Lhasa overland route has two roads, north and south. The northern route heads to Nagqu to join the Qinghai Tibet Highway, while the southern route heads straight through Nyingchi to reach Lhasa. 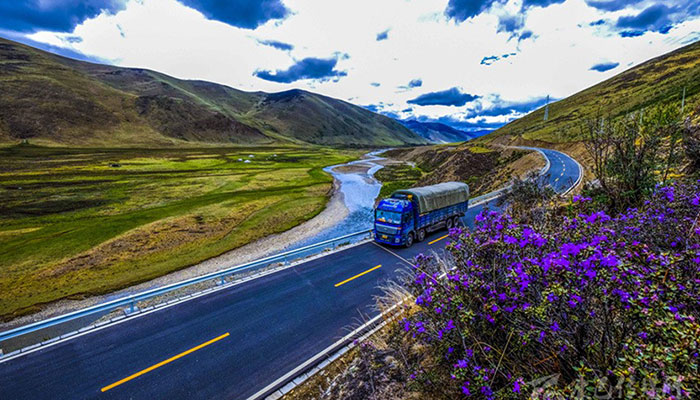 The Xinjiang Tibet Highway is probably the hardest of all the roads to Tibet, and runs from Yecheng in the Xinjiang Uyghur Autonomous Region to Lhatse in the Tibet Autonomous Region. Stretching out for over 2,000 kilometers, the road passes through some of the most hostile environments on the planet, and at altitudes that make driving harder due to thinner atmosphere. After Lhatse, the road joins the G318 Friendship Highway and runs east to Lhasa.

Make it Easy to Get to Tibet from China with Us

Getting to Tibet from mainland China can be easier than you might think. All tourists to Tibet are required to be on a pre-arranged tour with a registered travel agency, and we can help with planning and executing your whole China and Tibet trip. Our professional travel consultants can help you to decide where you want to go, how you want to travel, and can make expert recommendations based on their years of experience and unique knowledge of Tibet. 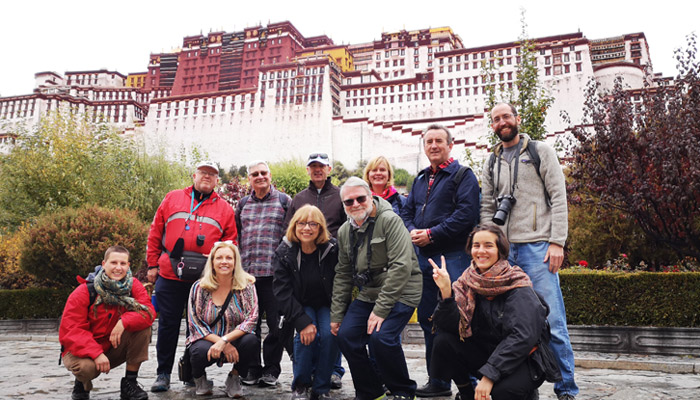 Join in our China Tibet tour to make it easy

They will also advise you on the best way to get to Tibet for your vacation to meet your needs, and can arrange the route for you, to make the trip easier. We can also help you to obtain train tickets and flights to Tibet from mainland China, and are able to provide you with the Tibet Travel Permit, which you will need to enter the region and travel in the area of Lhasa, as well as all the other permits you will need.

Getting to Tibet from mainland China can be done in several ways, from flying over the mountains and taking the epic train journeys to taking the long drive to Tibet along the major highways, or even cycling yourself, if you prefer. With multiple ways to get to Tibet from mainland China that are suitable for all types of travelers, there is no reason not to start planning your epic adventure on the Roof of the World.

Read More about How to Get to Tibet from China