How to Get to Tibet from India

Getting from India to Tibet is now relatively easy, despite there is no direct flight or train available between the two regions. Tourists can first fly directly from New Delhi to Beijing, Shanghai, or Guangzhou in mainland China, then take Tibetan train or domestic flight to Lhasa. Another option is to enter Tibet from Nepal. In this case, you can choose a direct flight from Kathmandu to Lhasa, or take a road trip across the plateau. As an experienced Tibet travel agency, we offer you the ultimate guide on travelling to Tibet from India. Read on for details.

Getting from India to Tibet via Nepal

Nepal is the bordering country that has the most convenient transportation to Tibet. On the other hand, it is intimately related with India in addition to the location. So, it is a wise choice to enter Tibet via Nepal, if you come from India.

It's a popular thing to take a trip from India to Nepal, and there are many ways to complete it. Here we will list some of most recommended ways for reference.

Flying directly from Delhi to Kathamndu is the first choice. Operated by Nepal Airlines, the flight will depart 11 times every day from New Delhi's Indira Gandhi International Airport, and takes about 1 hour and 45 minutes to reach Kathamndu. It costs around $90 on average. It is the least expensive way as well as time-saving, in terms of flight routes to Nepal. You can also fly from Kolkata, Varanasi, Bangalore and Mumbai to Kathmandu, although there may be fewer flights available every day. 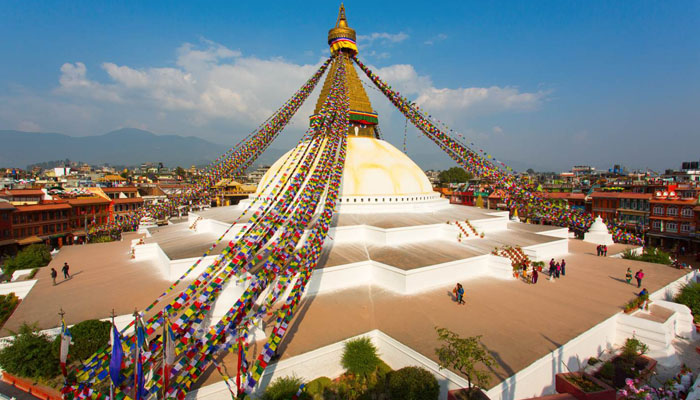 If you choose to enter from India to Nepal by train, you can go through Siriguri and Kakarpitha in the east, Bambasa and Bhimdatha in the west, or from the crossings at Jamunaha/Nepalgunj, Sunauli/Bhairawa and Raxaul/Birganj in the south. Then from these points, you can take a bus direct to Kathmandu, which lasts around 3 to 8 hours. Taking the train seems like time-consuming, but it is convenient for those who are not good with flight. Also it is flexible for anyone to travel from almost anywhere in India to any border crossing owing to the well-developed rail network in India.

It should be noted that Indian citizens do not need a visa to enter Nepal. However, if travelling by air, Indian citizens are required to present a valid passport or Voter ID at the time of check-in and at the point of entry. Foreigners can get Nepal tourist visa on arrival at Kathmandu airport.

Kathmandu to Lhasa by Overland or Flight

Kathmandu is the only international city that has direct flights to Lhasa, which cost about $300 on average. The flight time is relatively short, about an hour and a half for the 600km journey. There are two daily direct flights from Kathmandu to Lhasa: CA408 (12:10-16:00) and 3U8720 (11:30-15:10). If you opt to take the flight, you can inquire about flight schedule in advance. 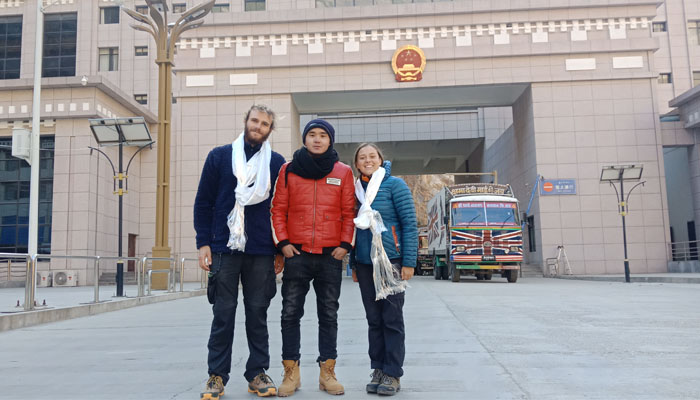 Overland travel from Kathmandu to Lhasa is more popular with many tourists than flying. It first takes about 7-8 hours to travel by bus to Gyirong border, on the south side of the Jethro Bridge, across the stunning Trisuli River Valley. Once you go through the customs at the border, our guide will meet you and escort you by car to the town of Gyirong for your first night.

From there, your journey will begin, crossing the Qinghai-Tibetan Plateau to Lhasa, passing through alpine mountains, vast broad grasslands, stunning lakes, and historical and cultural cities of Tibet. Once in Lhasa, you will experience the best of Tibetan culture and religion in the region's capital and cultural center.

Getting from India to Tibet via Mainland China

You can first fly from New Delhi in India to the mainland Chinese city and then take a plane or train directly to Lhasa. There are many flights from New Delhi to Beijing, Shanghai, and Guangzhou in India, with several different airlines operating, so it's best to choose the most suitable departure airport from you.

If you choose to fly to Beijing, you can take the flight by Air China. The direct flight costs from $300 to $600 basically, varying as per different situations and times. There are five flights per week to Beijing, and the average flight time is about 6 hours. When you arrive in Beijing, you can either fly or board the train to Tibet. 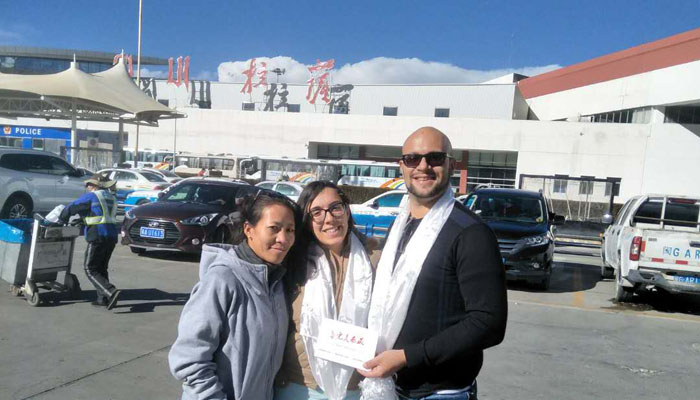 a. Beijing to Lhasa Flight

There is one daily flight from Beijing to Lhasa, departing from Beijing Capital International Airport T3 at 08:15 am, with the full price from $500 per one-way ticket. The flight is bound to land in Lhasa Gonggar Airport at 15:40 pm, after flying for about 8 hours and 25 minutes. It will stop for a while in Chengdu en route.

b. Beijing to Lhasa Train

If you choose to fly to Shanghai, the cheapest flight Air India costs about $285 and takes about 6 hours to fly. Upon arrival in Shanghai, you can choose to fly or take the train to Tibet. 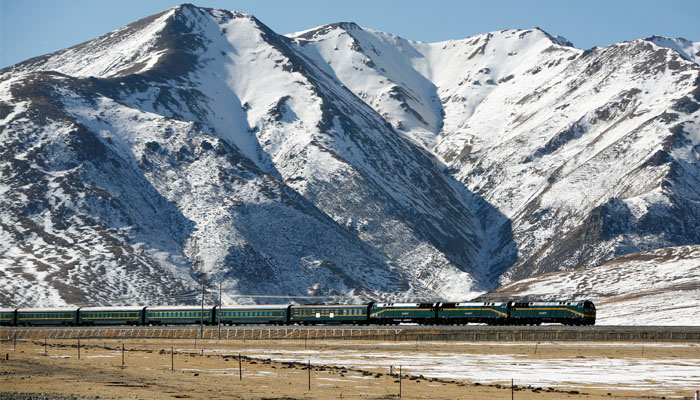 The view on the rail way of Shanghai to Lhasa Train

a. Shanghai to Lhasa flight

b. Shanghai to Lhasa Train

The train from Shanghai to Lhasa departs daily at 20:10 and takes 47 hours 27 minutes on the way. Soft sleeper tickets cost about $178, excluding any other commission fees. As there is only one daily train, it is difficult to get tickets during the peak season. It is recommended to check the train schedule ahead of time with us or your travel advisor, and let me help to book your Tibet train ticket for guarantee.

The direct flight from New Delhi to Guangzhou is operated by China Southern Airlines. It flies about 4 hours and 40 minutes and costs $520 on average. After reaching Guangzhou city in southern China, you can take the train to Tibet, or board the flight there. 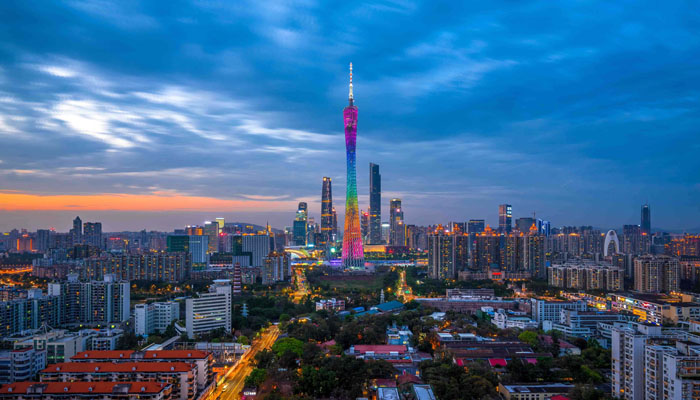 Guangzhou City is another crossing point for travelling from India to Tibet.

a. Guangzhou to Lhasa Flight

Handled by China Southern Airlines, the flights to Tibet from Guangzhou depart twice a day from Guangzhou Baiyun Airport T2 at 08:05 am and 08:55 am. The total airplane fare starts from $168 for one-way ticket. And it will stop in Chongqing city before reach Lhasa airport at around 14:05 pm and 14:50 pm.

b. Guangzhou to Lhasa Train

The train from Guangzhou to Lhasa runs for the longest distance among all the train routes to Tibet. And there is only one train departing from Guangzhou Railway Station, taking around 52 hours 34 minutes. It is suggested to first fly to Xining or other closer cities in mainland China, with shorter railway distances to Tibet.

Visas and Permits Required to Visit Tibet from India

If you are travelling to Tibet with a regular Indian passport and do not plan to travel to non-open areas of Ngari, like Mount Kailash and Lake Manasarovar, you can follow the normal procedures to get the Tibet Travel Permit. Just mail your copies of your passport and Chinese Visa to us at least 20 days prior to the departure of your tour. It will usually take 8-9 working days to go through the Tibetan Tourism Bureau to get the permit issued. With the permit, you are qualified to take the train or flight to Tibet from mainland China.

Besides, when you travel outside of Lhasa, such as Everest Border Area, our tour guide will help you to apply for the Alien’s Travel Permit. But you don't need to worry about this, our travel agent will process all your relevant documents according to your itinerary.

If you hold an Indian passport and plan to go to Mount Kailash for pilgrimage, you can not contact any travel agency to deal with your permits on this occasion. Instead, there are currently only two organizations in Tibet that can authorize Indian pilgrims for pilgrimage, one is the Foreign Office and the other is the non-governmental Pilgrimage Center. But you can also freely contact us for travel advices and tips.

For anyone who are planning a visit to Tibet from India, you should not be frustrated since it does have convenient ways for getting into the plateau. Just choose the proper way of yourself, either transferring via Nepal or China, according to your situation. And make it clear that what kinds of permits you need to obtain and how can you apply for them. If you still have questions about travelling to Tibet from India, please feel free to contact us for inquires. We are always glad to serve for you. 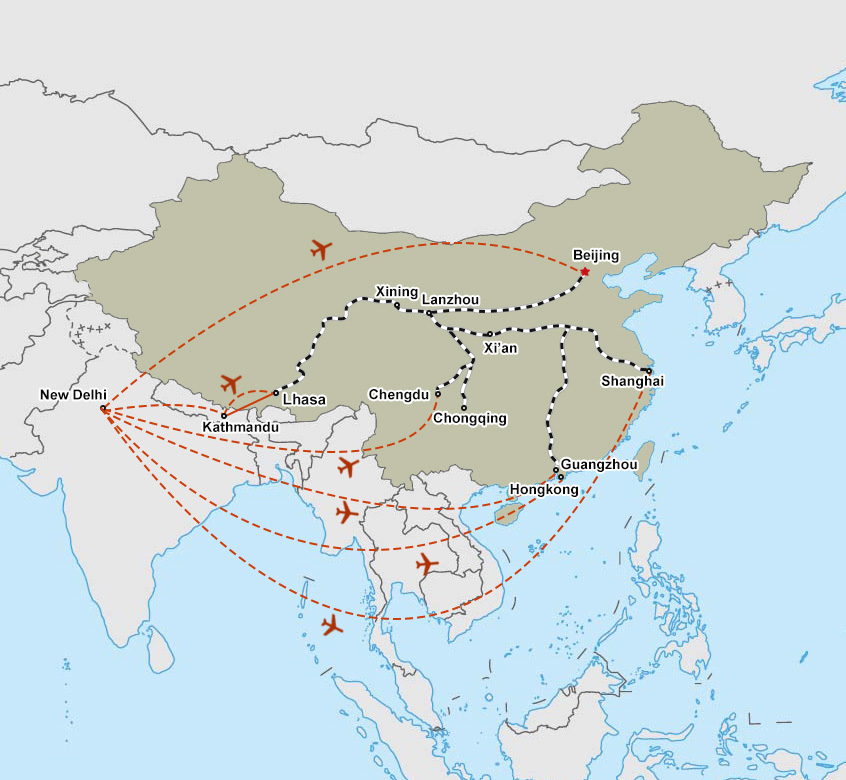 Distance from India to Tibet:

1) India - China - Tibet: First take flight or train from Inida to Kathmandu; then fly or drive overland from Kathamndu to Lhasa