How to Get to Tibet from Japan?

Travelling from Japan to Tibet is quite simple and convenient, since Japan is closely neighbored to China and favorable visa policy is offered for Japanese tourists. Although there is no direct flight from Japan to Tibet, you only need to fly to Beijing, Shanghai, Chengdu, or other major city in China, and then take a plane or train to Lhasa, the provincial capital of Tibet.

Another option is to fly to Nepal, and then choose a direct flight from Kathmandu to Lhasa or travel overland to Lhasa via Gyirong Port. Here, we have gathered the most useful and up-to-date info of getting to Tibet from Japan, to help you better plan your upcoming trip to Tibet.

Japan to Tibet via Mainland China

The first and the most recommended way is to transfer from Japan to Tibet via Mainland China. You can have more chances on deciding your route by getting into China and enjoy a smooth trip from China to Tibet.

Japan to China by Flight

Frequent flights are provided between Japan and China. And currently you can take a direct flight to China from Tokyo, Osaka, Nagoya in Japan. It is recommended to first fly to some Tibet’s gateway cities like Beijing, Shanghai, Chengdu, Hong Kong, Guangzhou, so that you can have immediate transfer to Tibet by train or flight. When booking your flights to China, it is suggested to make more comparisons online, and to get a discounted flight of your scheduled time. 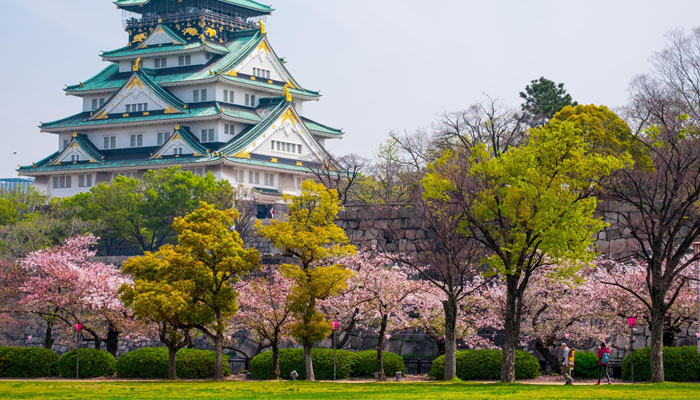 There are many flights from Osaka to mainland China

If you start your flight journey from Tokyo, you will have the most flight options from early morning to late night. There are nearly 16 non-stop flights from Tokyo to Beijing, 30 flights to Shanghai during peak travel time. It takes around 4 hours and 3 hours respectively to the two cities. Also, there are flights to Chengdu from Tokyo, operated by Air China Airline or All Nippon Airways, covering a longer time of about 6.5 hours.

And if you fly from Osaka or Nagoya, you will also find it easy to get yourself an airplane ticket too. There are around 6 flights to Beijing and 20 flights to Shanghai from Osaka, taking around 3.5 hours and 2.5 hours separately. And of course, the longer time the flight takes, the more expensive the ticket fee you will pay for. Check the schedule information of some important flights from Japan to China below on the table.

Flight Schedules from Japan to China

China to Tibet by Train or Flight

Once you arrive in China from Japan, you can opt to fly or board the train to Tibet. Non-stop flights depart from almost a dozen of cities in China to Lhasa, and the flight time can be low to 2 hours. The train, on the other side, will take quite an extended period of at least a day and night, as the running speed on the part of Qinghai-Tibet Highway will be slowed down when traversing frozen earth and mountain tunnels. But you have your own choice, depending on your time and schedule.

a. Beijing to Lhasa

From Beijing to Lhasa, there are normally two direct flights available every day. Operated by Air China, the flight from Beijing to Lhasa departs in the morning at 8:35 am or 10:35 am, and arrives in Lhasa Gonggar Airport at 13:05 pm or 15:05 pm. Flight ticket from Beijing costs from around $500. When it comes to peak travel time, there will be extra flight to depart in the afternoon as well. 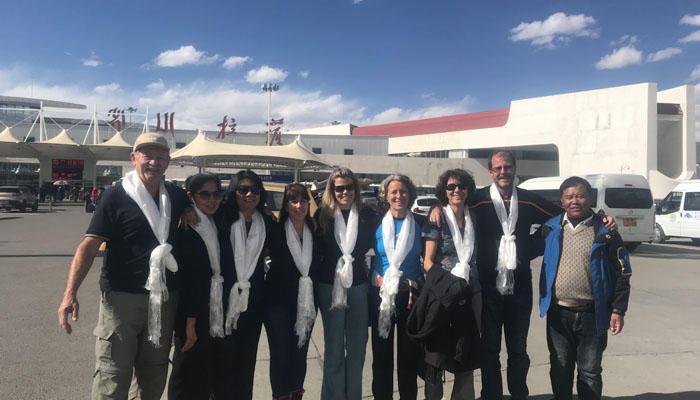 If you take the train to Tibet from Beijing, then you have one choice for boarding every day. The train departs daily around 20:00 pm from Beijing, and takes about 40 hours to reach Lhasa, after running for 3,757 kilometers. Owing to its limited supply, the train ticket can be hard to get, especially during summer season of peak time. In this case, you can first take a flight from Beijing to Xining, where has the most frequent trains departing to Tibet every day.

b. Shanghai to Lhasa

Just like Beijing, the direct fight from Shanghai to Lhasa leaves two times per day, with a stopover in Xi’an or Chengdu on the way. It takes around 8 hours to reach Lhasa, and the price starts from $300 dollars. 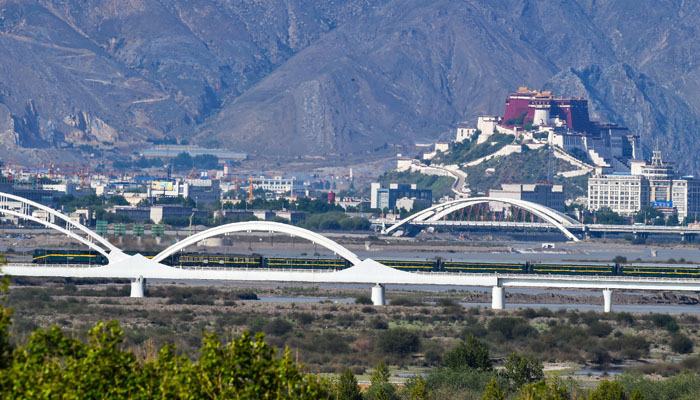 You can also get to Lhasa by Qinghai-Tibet train

Trains from Shanghai departs at 20:08 am daily, and will take around 47 hours for its whole ride. This route is the second longest train route to Tibet from mainland China. If you fell yourself intolerable with this long-term train journey, you can break down it by first flying to Xining from Shanghai.

Guangzhou is one of the most popular entry cities to China for international travelers. However, it could be less convenient to reach Tibet from Guangzhou, compared to other gateway cities. Both train and flight depart only once from Guagnzhou to Lhasa, and the train journey is the longest one among all Tibet train routes. If you travel to Tibet from Guangzhou, you are advised to take a transfer, to first fly to Chengdu or Xining, and then head to Tibet.

When you get to Tibet from Chengdu, you can choose to take the flight, instead of the train. Firstly, the flights from Chengdu to Lhasa departs more than 10 times per day, and take only about 2 hours on average. You can flexibly decide your flight time in the morning or afternoon. Secondly, you may miss the train to Tibet from Chengdu, as it departs every other day, despite it only take less time of around 36 hours on the way. 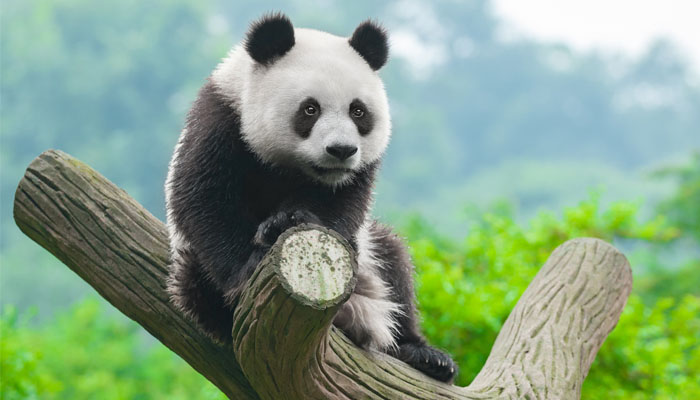 You can also visit Pandas in Chengdu before head to Lhasa

Neither train nor flight is provided for getting to Tibet from Hong Kong in a direct way. as a better choice, Japanese tourists from Hong Kong can first fly to Chengdu, and then take the connecting flight from Chengdu to Lhasa. Or, you can first head to Xining, and then board the Tibet train there.

Japan to Tibet via Kathmandu, Nepal

Unfortunately, there are no direct flights to Kathmandu from Japan. If you do not have a plan to travel to Nepal, then it is not recommended to transfer to Nepal before entering Tibet. But if you want to visit Nepal first, it is also a good choice to transfer from Japan to Nepal and then to Tibet. 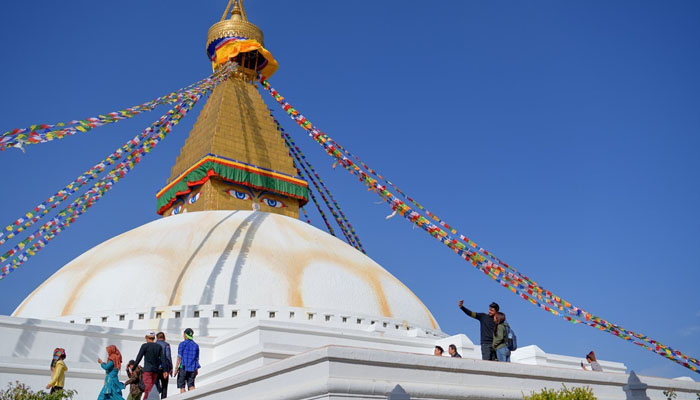 There are mainly two ways to get to Tibet from Kathmandu

Flying from Japan to Nepal requires a transit from Delhi. The cost is about 450 US dollars, while the whole journey will take at least 15 hours. From Nepal to Tibet, there is currently no train. However, you can enter Tibet by land via Gyirong Port, namely the Sino-Nepal Border. Or you can fly directly from Kathmandu to Lhasa.

a. Kathmandu to Lhasa Flight

Kathmandu is the only city that offers direct international flight to Lhasa. Flights from Kathmandu to Lhasa cost about US$275. The flight time is relatively short, and the 600-kilometer journey takes about an hour and a half. During the flight, you will be lucky to see the highest peaks of Mount Everest and other Himalayan mountains, if the weather condition is good.

b. Kathmandu to Lhasa by Overland

Compared to the flight, the overland travel from Kathmandu to Lhasa tends to be more popular among tourists. The road trip first takes you cross the Gyirong Port, the border crossing checkpoint between Nepal and China. After you pass the customs to enter Tibet, you will meet with our Tibetan guide, who will keep you accompanied all the way to Lhasa. 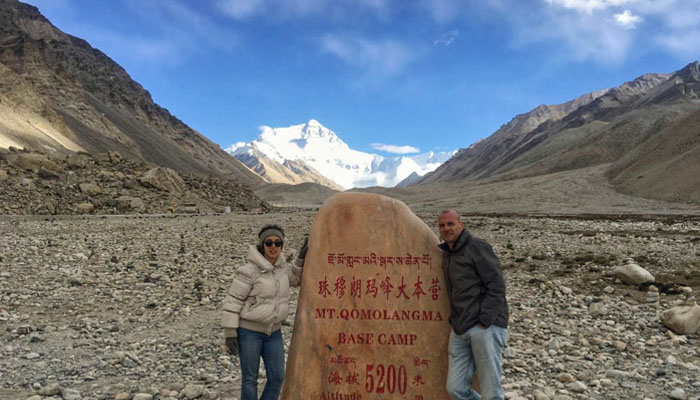 While driving on along the Friendship Highway, you will pass the Everest Base Camp in Tibetan side, then move to historic city of Shigatse, and forward to turquoise Yamdrok Lake before get to Lhasa city. The overland journey itself is a wonderful 8-day Tibet trip that presents the unique mountains, Buddhist temples, scared lakes of Tibet, and is sought-after by many first-timers to Tibet as well as road-trip lovers.

Permits to Obtain for Travelling to Tibet from Japan

Tourists with Japanese passport can enjoy visa-free access to China within 15 days. But you will still need to obtain the Tibet Travel Permit, which will be checked before you board the train or flight to Tibet from China. Since the application of Tibet Travel Permit requires the China Visa, you will also need to get your China Visa in the first place.

Planning a suitable travel route will have great significance on your trip to Tibet from Japan. Generally, it is suggested to transfer from Japan to Tibet via mainland China, to take advantage of the convenient flights and trains. And you can enjoy your visit to both China and Tibet in one go by this way. If you have special wonder about Nepal, you can also travel to Nepal first before entering Tibet. For more questions about your travelling to Tibet from Japan, please contact us for personal advice or leave your comments below. 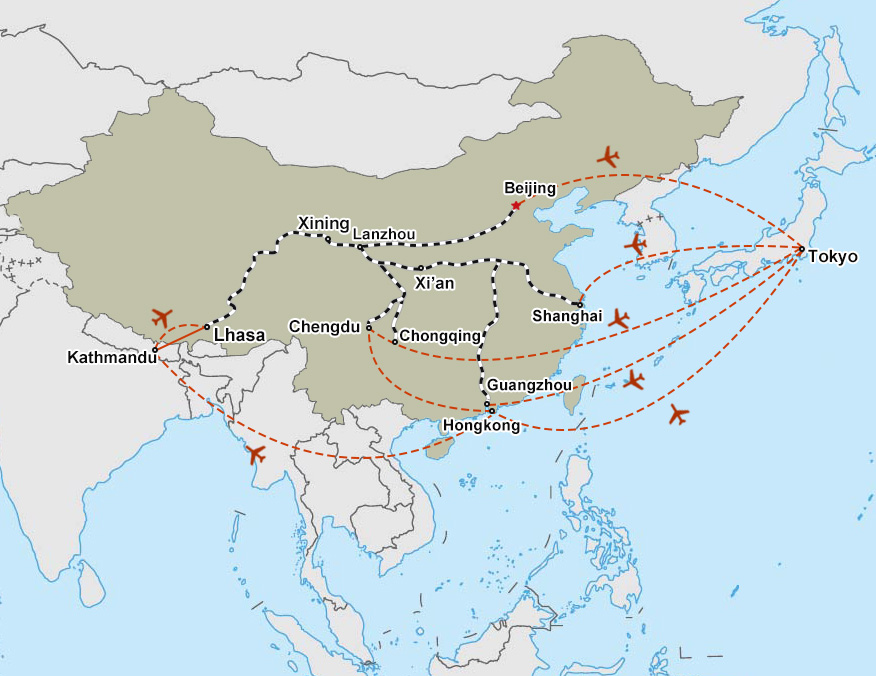 Distance from Japan to Tibet:

1) Japan - China - Tibet: First take flight from Japan to China; then take train or flight from mainland China to Lhasa.

2) Japan - Nepal - Tibet: First get from Japan to Kathmandu, Nepal; then fly or drive overland from Kathamndu to Lhasa.

Be the First One to Comment "How to Get to Tibet from Japan?"