Can I Travel from India to Tibet by Train?

Unfortunately, there is currently no direct train that can take you from India all the way to Tibet. There may be one day, since there are plans to extend the Lhasa-Shigatse railway all the way to Kathmandu. However, for now, you will need to transfer to Tibet either through Nepal or China in order to ride the trains.

India to Tibet by Train via Nepal

Travel to Tibet via Nepal is possible, though you will only be able to get the train as far as Nepal’s border with India. Nepal actually has no railways, so once you are there, you have to travel overland or take a flight to Tibet.

India to Nepal by Train

Nepal may not have its own railways, but the railways in India cross into Nepal at certain points, which allows you to cross the borders to Nepal. The three main routes into Nepal from India when traveling by train are at Birgunj, Nepalgunj, and Jaynagar. These are the main three entry point for train travel to the Nepali border with India. 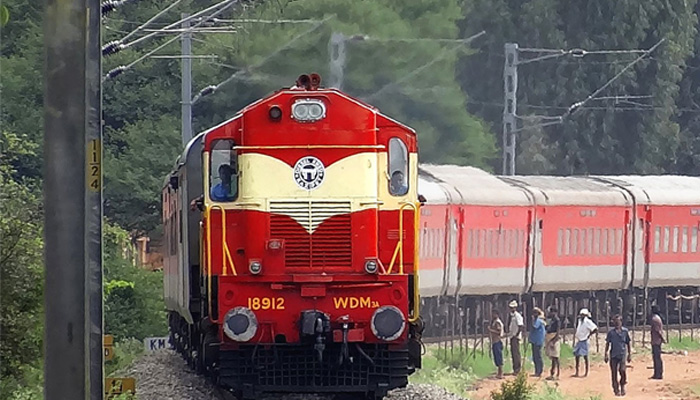 India to Nepal by Train

The first and often most used is at Raxaul Junction in India, which crosses the order into Nepal to Birgunj. There are direct trains from Kolkata and New Delhi to Raxaul Junction, which makes it an ideal crossing point when coming from any point in India. And the buses or shared cars to Kathmandu can take as little as 4-5 hours.

The crossing at Nepalgunj lies at the Indian border town of Nanpara, which is easily accessible from the main stations at Lucknow and Gorakhpur. The trains from Lucknow and Gorahkpur connect all the way to Nepalganj Road station, where you can easily cross the border. Connecting buses are available to reach Kathmandu.

Jaynagar is the third and least used crossing point for train passengers heading for Nepal, as it is not as easy to reach Kathmandu from the border as the other two main crossings. The border is easily reached by train from either Patna or Katihar, which connect with many major cities across India. However, once off the train in Nepal you will need t pay for private cars to take you to the nearest bus terminal in Badharamal.

Nepal to Tibet by Overland or Flight

Once in Kathmandu, you no longer have a train option for travel to Tibet. Instead, you can opt to fly to Lhasa from the Tribhuvan International Airport in Kathmandu, or take the overland journey and cross the border from Nepal to China at Gyirong Port and Rasuwa Gadhi. 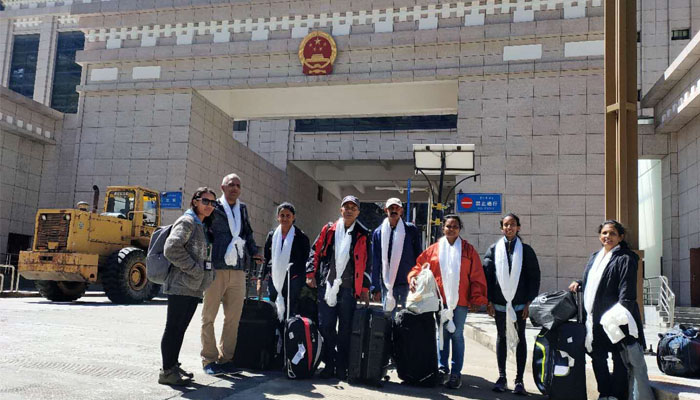 Nepal to Tibet via Gyirong Port

Flights run daily from Kathmandu to Lhasa, and can cost as little as 230 US dollars per person. The flights take around 90 minutes to reach the Tibetan capital airport, and cross the Himalayas directly over the summit of Mount Everest.

The overland route from Nepal to Tibet takes you from Kathmandu to Rasuwa Gadhi by car, crossing the border to Gyirong Port on the Chinese side. From there, you will meet your Tibetan guide and driver, and take a tour across the plateau to the Tibetan capital.

You will need to obtain certain documents before you can cross the border into Tibet, whether you are flying or traveling overland. The first thing you need is the Chinese Group Visa, which is a special visa issued only to people crossing into Tibet from Nepal. The visa is only available for tourists that have pre-booked a tour with a registered Tibetan travel agency. On your arrival in Kathmandu, your travel agency will meet you to obtain your passport in order to make the visa application on your behalf. Personal applications for the Group Visa are not permitted by the Chinese Embassy in Kathmandu.

You will also need to have the Tibet Travel Permit, the main permit for entry into and travel around Tibet. This is applied for after you have booked and paid for your Tibet tour with your travel agency. Once booked, we will make the application for the permit on your behalf, and bring the permit to you in Kathmandu when we make the application for the Group Visa. There are also other permits you will need, even if you are flying. These include the Alien’s Travel Permit and the Frontier Pass, both of which are obtained by us on your behalf.

India to Tibet by Train via Mainland China

If you do not want to enter Tibet from Nepal, then you can always opt to take a flight to mainland China and take a train from their direct to Tibet.

India to China by Flight

You can find direct flights from India to Beijing, Shanghai, and Guangzhou, all of which have direct trains that run to Lhasa, the Tibetan capital. 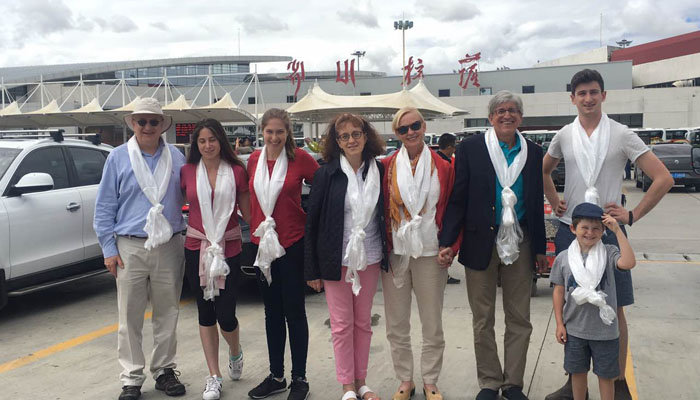 China to Tibet by Train

There are direct trains to Tibet from seven gateway cities across China, and Beijing, Guangzhou, and Shanghai are among those. Trains from Beijing depart daily for the plateau, and take around 41 hours 17 minutes to traverse the country, arriving on the third day of travel. Sleeper berths cost from as little as 107 dollars per person. 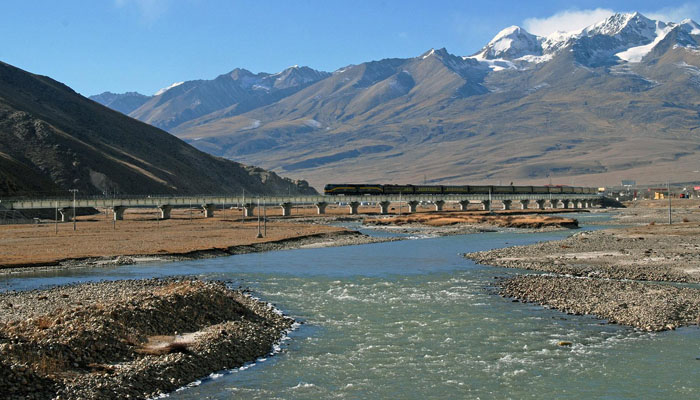 Get to Tibet from mainland China by train

From Shanghai, the daily trains to Lhasa take around 46 hours 39 minutes to reach Lhasa, again arriving on the third day after departure. Sleeper berths on the train can cost from around 118 dollars per person, up to around 190 dollars for the more expensive first-class option.

Guangzhou is the furthest station from Lhasa, and the daily train, which covers a distance of 4,980km, takes around 52 hours 41 minutes. Sleeper berths start at around 129 dollars per person, up to as much as 220 dollars for the first-class soft sleepers.

Primarily, you will need to obtain your own visa for entry into China. The visa can be obtained from any Chinese Embassy around the world, though it is recommended to obtain it in your home or resident country. The visa processing normally takes around three working days, and you will need to submit a completed application form, along with your valid passport, two passport-sized photos, proof of onward travel, proof of hotel booking in China, and the valid visa fee for your home or resident country. You are suggested to not mention Tibet when applying for the visa.

Once you have the visa, you can book your tour and we can make the application on your behalf for the Tibet Travel Permit, which you will need to board the train to Tibet.

For anyone planning a trip to Tibet from India, travel as a tourist is the best option to take. You have the choice of traveling through Nepal by using the railways in India to take you to Nepal, before flying or taking the overland trip to Lhasa. Alternatively, you can fly to a number of Chinese cities from India, and take one of the seven Tibet Trains to the world’s highest capital.

Be the First One to Comment "Can I Travel from India to Tibet by Train? "