How to Travel from Kashgar to Lhasa?

Lying in the furthest corner of China, Kashgar is an oasis city in the Xinjiang Uyghur Autonomous Prefecture and one of the most western cities in China. Once an important trading post and strategic location on the ancient Silk Road, the city is also the start of the famous Xinjiang Tibet Highway, which runs for 1,296 kilometers along China’s western-most borders. Taking a trip from this ancient 3,000 year-old oasis in the Taklamakan Desert is no mean feat, and can be done in a number of ways, depending on your own preference. Lying around 2,086 kilometers from the Tibetan capital by road, you can travel from this stunning city to the plateau capital by road or by flight.

Kashgar to Lhasa by Overland – The Most Recommended Way

The most recommended type of travel from Kashgar to Lhasa is by road, as this allows you to fully explore this amazing landscape as you pass through it on the ground, rather than above it by air. Driving from Kashgar to Lhasa does require you to be on a pre-approved tour of Tibet for that section of the trip, and the best way is to arrange the tour for the whole trip, including having a driver and guide. 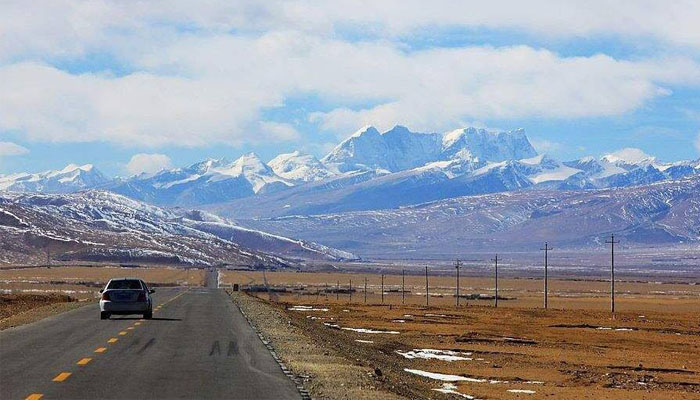 The route from Kashgar to Lhasa starts in the oasis city, and follows two main roads in China. One of the world’s highest roads, the G219 National Highway is the first section of the route, and runs down the western border of China. This is the longer section of the two roads that make up this route, and runs generally south by southeast through Rutog County, Shiquanhe, Darchen, and Saga, to end its long journey in Lhatse.

The route to Lhatse passes by some of the most amazing sights in the world, including the Pangong Tso Lake and the sacred Mount Kailash and Lake Manasarovar. This long road is filled with stunning landscapes that range from desolate and barren deserts to lush green valleys and high snow-capped mountains.

The Xinjiang Tibet Highway also passes over several high mountains at more than 5,000 meters in altitude, as well as crossing 16 passes that have permanent ice formations, 44 mountain glaciers, and some of China’s most remote and inaccessible regions. One part of this epic journey even passes through a region where nothing lives, except a few small wild animals.

At Lhatse, the road designation changes, and you will join the infamous G318 National Highway, also known here as the Sino-Nepal Friendship Highway. The main road through Tibet, this is the main route from western Tibet to Lhasa. After joining the G318 at Lhatse, you will drive first to Shigatse, the second city in Tibet, before traveling through and on to Lhasa, your final destination.

The whole trip, which can take anywhere from 15 days to as long as 21 days, depending on where you visit along the way. Some of the popular stops along this road route include Mount Kailash and Lake Manasarovar, as well as the famous Mount Everest Base Camp (EBC). 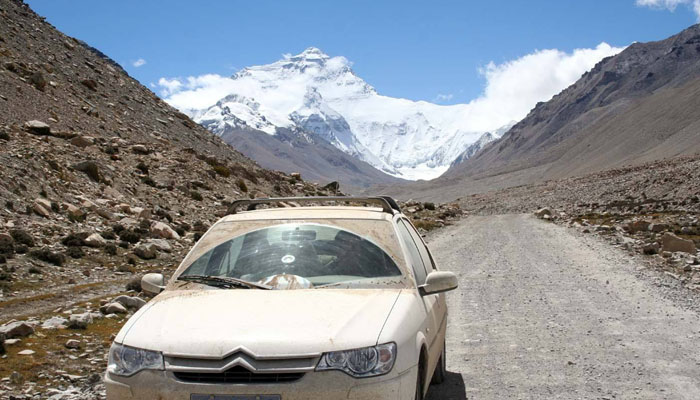 Kashgar to Lhasa via Mount Everest Base Camp

Kashgar to Lhasa by Flight – The Fastest Way

Flights from Kashgar to Lhasa do run daily from this northwestern province, but none of them run direct between these two remote airports in western China. All flights to Lhasa are connecting flights that run through either Xi’an or Chengdu. However, this is still the fastest way to travel between these cities.

Kashgar Airport lies just a ten-minute ride from the city center, and you can easily catch your flight to mainland China. On average, flights depart around 3-4 times a day, with the simplest and most popular connection being through Chengdu. On average, the connecting flights from Kashgar to Lhasa, via Chengdu, take around 8-16 hours, depending on the wait time for your connection, and can cost from around 600 US dollars per person for an economy one-way flight. And while that is an immense journey in itself, it is still almost two weeks shorter than driving.

If you are in no hurry to get to Lhasa, and are prepared to take a slightly longer route through Urumqi and Chengdu, you can get the flights a little cheaper. Adding the second connection is not really worth the wait for the savings you will make, as it is normally only around 3-4 dollars per person cheaper.

If you want to save money, then do not book the flight as a connecting flight, but make it two separate flights. The two daily direct flights from Kashgar to Chengdu cost around 446 dollars per person and take around 4 hours 35 minutes. The next flight, if you book it right, can connect after just a couple of hours wait in Chengdu, and can get you to Lhasa after another 2 hours 30 minutes. And the flights from Chengdu to Lhasa can be found for as little as 38-41 dollars per person. So you can actually make it to Lhasa in around 9-10 hours, with a little prudent planning.

Kashgar to Lhasa by Train – The Cheapest Way

While you may think it is impossible to get from Kashgar to Lhasa by train, this is a feasible option, which can even be done in a quicker time than driving. There is no direct train to Lhasa from Kashgar, and it may be a very long time before that idea is realized. However, there is a train from Kashgar to Xining, from where you can easily get the connecting train along the Qinghai Tibet Railway to Lhasa. 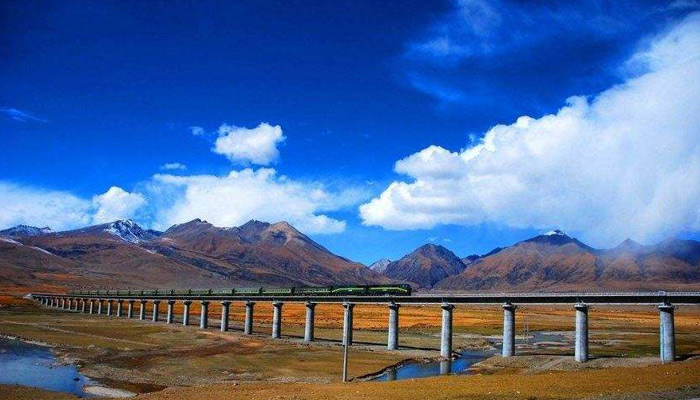 One can get the connecting train from Xining to Lhasa via Qinghai Tibet Railway.

The train departs from Kashgar railway station once a day, and passes through the town of Turfan, where you will change trains. The trip to Turfan, near the Xinjiang capital of Urumqi, takes around 15 hours, and costs from approximately 18-45 US dollars, depending on your ticket class.

From Turfan, the connecting train to Xining is the same through train that runs to Lanzhou, both of which are departure locations for the trains to Tibet. The train to Xining takes around 8-9 hours, and can cost from between 60-80 dollars per person. From Turfan, there are four trains a day, so you have more options should you miss the first connection.

The train from Xining to Lhasa is the final leg of the trip, and takes just over 21 hours to reach the Tibetan capital. Costing from around 74 dollars for the hard sleeper cabins, this is the longest of the legs of this 47-hours train ride from Kashgar to Lhasa.

Join Us for a Pleasant Trip from Kashgar to Lhasa

If you are thinking about taking a trip from Xinjiang to Tibet, traveling overland from Kashgar to Lhasa, we can accommodate you to arrange this epic adventure for you. As you will need to have a tour guide and private tour for your trip to Tibet, we can make the arrangements for a huge overland adventure that will take you to some of the most outstanding places in both Xinjiang and Tibet. 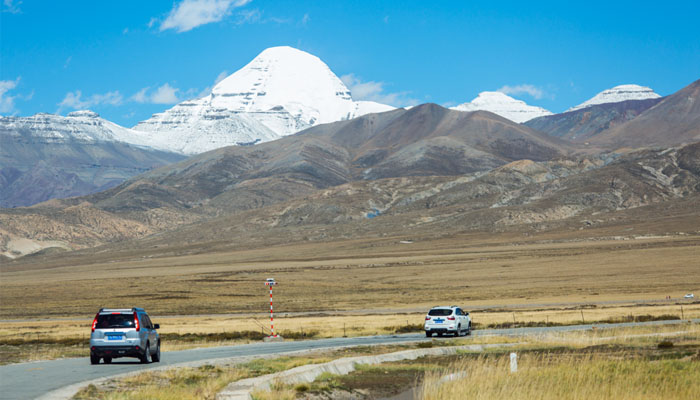 Join us to ejoy a worry-free trip from Kashgar to Lhasa.

Our 16-day overland tour takes you from the Xinjiang city across the Taklamakan Desert, and over the boundary between Xinjiang and Tibet, near the famous Pangong Tso Lake. From there, you continue to travel generally southeast to reach the sacred Mount Kailash, where you will be able to take on the infamous Kailash Kora Trek, the hardest trek in Tibet.

From Darchen, at the foot of Mount Kailash, you will travel on to Shigatse, taking a short side-route to visit Mount Everest along the way, before finally arriving in Lhasa via Gyantse and Lake Yamdrok. This is one of the best ways to travel between Kashgar and Lhasa, though we can also arrange other versions of the trip, including tours that include flights and sightseeing in other places in Xinjiang.

The vast distance between Kashgar and Lhasa is probably the hardest road you can take through China, with parts of the route reaching altitudes of more than 6,000 meters. Overall, this route has an average elevation of around 4,500 meters above sea level, and is not a trip that you would want to drive yourself. But if this trip is the kind of adventure that you can get behind, then come talk to us and let us help to make your dreams come true.

Read More about How to Travel from Kashgar to Lhasa?

Be the First One to Comment "How to Travel from Kashgar to Lhasa?"