Road to Tibet: How Can I Travel to Tibet by Overland?

Traveling overland to Tibet is one of the greatest adventures you can take on the high-altitude Tibetan plateau. And with five roads leading to Tibet from different directions, you have a choice of five different epic adventures. Among these roads, the most popular are the Friendship Highway from Kathmandu to Lhasa and the Sichuan-Tibet Highway from Chengdu. But the choice is yours depending on your own situation and preference.

Overland from Kathmandu to Lhasa via Friendship Highway

The overland route from Kathmandu to Lhasa is the most popular route for overland travel to Tibet, as well as being one of the most popular tours of Nepal and Tibet. An eight-day trip across the plateau, this is an awesome adventure that takes you from the exotic city of Kathmandu to the heights of the Everest Base Camp (EBC) and the wonders of the world’s highest capital city - Lhasa.

It is not possible to make this trip yourself, as you will need to be part of an organized tour of Tibet in order to travel in the region. All tourists to Tibet must be on a pre-booked tour of the region in order to obtain all the documents you need to get into the Tibet Autonomous Region (TAR). 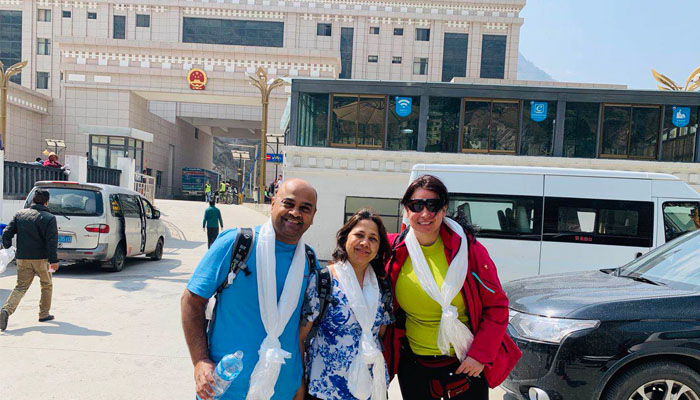 Travel from Nepal through the Gyirong port to Tibet

While you can get to the border from Kathmandu by bus or local car rental, once you cross the border, you will be greeted by your own guide and driver, and will be driven across the plateau to Lhasa, the Tibetan capital.

The trip beings with the drive up to the border with China from Kathmandu, passing along some beautiful scenic locations on the road to Tibet, including the spectacular Langtang National Park. The road to the border is not the best, and it can take as much as 6 hours to reach Gyirong Port. Once there, your guide will meet you and you will drive from the port to Gyirong Town, where you will stop overnight before heading for the famous EBC. 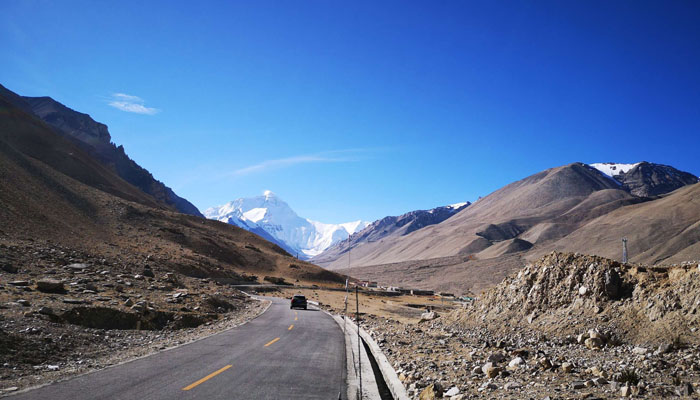 After Everest, you head on to Old Tingri and then to Shigatse, Tibet’s second city, before heading on to Lhasa, through Gyantse. The trip allows you to visit such amazing sites as the Tashilhunpo Monastery and the Gyantse Kumbum Stupa, the only one of its kind in Tibet. The best option for this trip to Lhasa overland is our amazing 8 Days Kathmandu to Lhasa Overland Adventure Tour, which gives you the best experience for this long journey.

Overland from Chengdu to Lhasa via Sichuan-Tibet Highway

Of all the four routes into Tibet that begin within China, the road from Chengdu to Lhasa, known as the Sichuan Tibet Highway, is the most popular. A favoured route for both domestic and international tourists wanting an adventurous trip to Tibet, this 2,049km road takes you through some of the most beautiful scenery on the plateau. 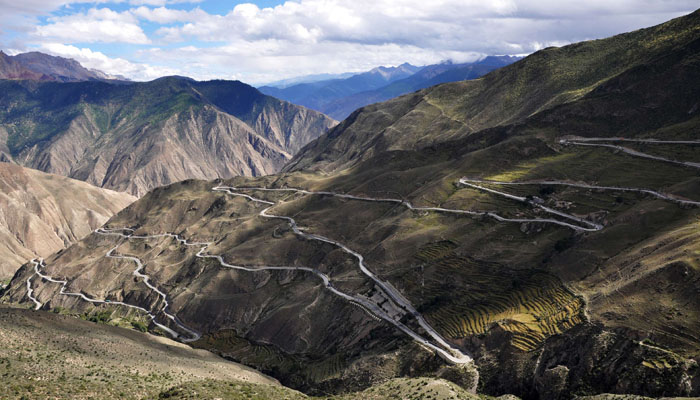 Sichuan-Tibet Highway is one of the most dangerous roads in the world.

This is not a route for the faint-hearted though, as it is renowned as one of the most dangerous roads in the world. And while international travellers require a guide and driver to make this trip, it is one that can only be done at certain times of the year due to harsh climates.

The road was once a patchwork of asphalt stretches interspersed with long runs of gravel and dirt roads. This is no longer the case, and the entire route from Chengdu to Lhasa is now a well-paved asphalt highway, with certain sections being brand new and faster roads. The final leg from Nyingchi to Lhasa now runs along the new High-Speed Expressway, which cuts travel time down drastically.

The route from Chengdu to Lhasa can be driven along a choice of two routes, Northern and Southern. The G317 northern route takes you up through Chamdo and Nagqu, and drops down to Lhasa along the Qinghai Tibet Highway, while the G318 southern route is the more direct one and the more popular of the two. This southern road takes you out of Chengdu through Ya’an, Kangding, and Xinduqiao, and on to Litang, home of the famous Grasslands. Then you continue on into Nyingchi, passing through the areas of Bangda, Basu, and Bome, and on into the city of Nyingchi itself. 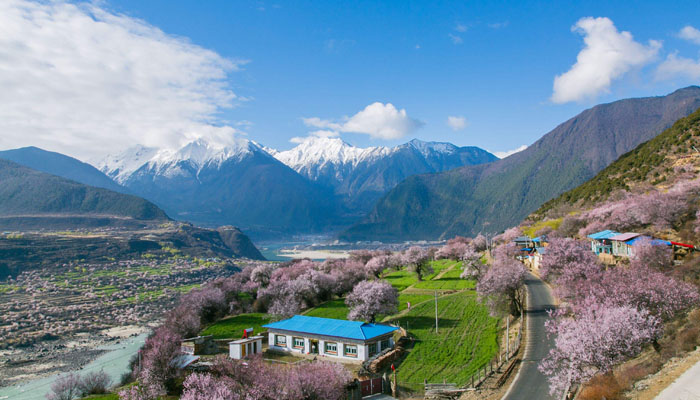 Sichuan-Tibet Highway will pass through the beautiful Nyingchi.

From here, the High-Speed Expressway takes you on to Lhasa, following part of the Yarlung Tsangpo River and skirting the edge of the southern range of the Nyenchen Tanglha Mountains. Almost all of the route from Kangding in Sichuan Province is filled with amazing scenery of high snow-capped mountains, alpine coniferous forests, stunning valleys, and awesome landscapes. This overland trip from Chengdu to Lhasa can best be done in spring or autumn, from April to May and September to October, to get the best weather for travel.

Overland from Kashgar to Lhasa via Xinjiang-Tibet Highway

The longest of all the routes into Tibet, the Xinjiang Tibet Highway runs for 2,844 kilometers from the Xinjiang Uyghur Autonomous Prefecture to the northwest of Tibet. Considered to be the most epic adventure in the Himalayas, a Xinjiang- Tibet tour can give you an amazing experience that you will not find anywhere else on the planet. And it takes you through the most varied climates and landscapes in the world.

This epic trip can take from 18-21 days to complete, depending on your route and the stops you will make, and must be done with a Tibetan guide and driver. The road is not the easiest to drive, but not because of mountains and dangerous hairpin bends. This is a journey that takes you higher than ever before in Tibet, at extreme altitudes where driving along a straight road can be hazardous if you are not used to the conditions. 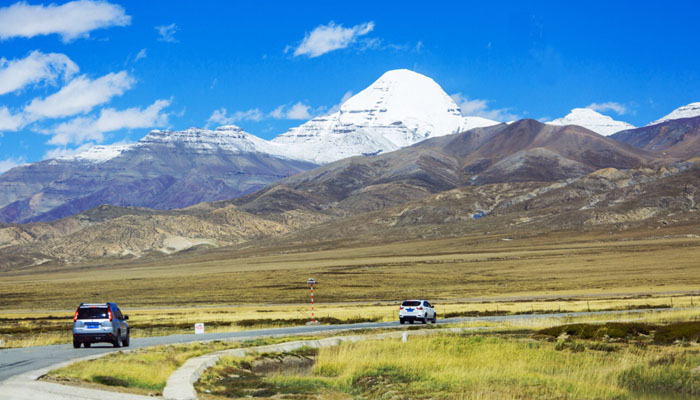 You will meet Mount Kailash en route of Xinjiang-Tibet Highway

And you will pass through deserts where there is no water or plant life for miles. The usual tours along this route also include a trek around the famous and sacred Mount Kailash, the most sacred mountain in the world, as well as a stop at Mount Everest’s Base Camp to view the world’s highest mountain.

The route from Kashgar in Xinjiang takes you south through the ancient kingdom of Guge, now lost in time and ruins, following the road that runs through Yecheng and past Pangong Tso, the longest lake in the world. After passing the Guge Kingdom area in Ngari, you will stop at Darchen to take on the trek around Mount Kailash, before heading on south to Saga, and then on to Mount Everest. 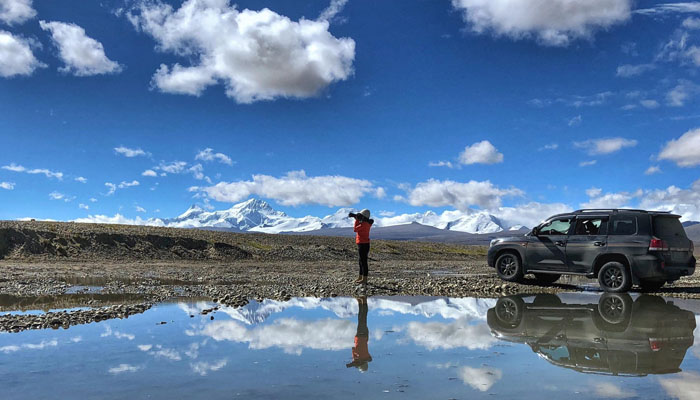 From here, after a night stopping over at the base camp, you will follow the famous G318 Friendship Highway to Lhasa, passing through Shigatse and Gyantse, and alongside the beautiful Lake Yamdrok to reach Lhasa. This route is not one that can be done in the winter months, as the intense cold of north-western Tibet can freeze the fuel in your vehicle. Driving across this road is best done between late April and early October. And the recommended option of this trip is our 16 Days Overland Adventure from Kashgar to Lhasa, which covers nearly all the fabulous attractions in Tibet along this epic highway.

Overland from Xining to Lhasa via Qinghai-Tibet Highway

Once the only way to get into Tibet, the Qinghai-Tibet Highway runs for 1,916 kilometers from Xining, the capital of Qinghai Province, to Lhasa. The shortest of all the routes from mainland China to Tibet, the road is now much less travelled thanks to the building of the Qinghai Tibet Railway. The road is still a great trip to Tibet, though. Taking you over two high mountain ranges, the route crosses the vast plains of the Kekexili Nature reserve and the Changtang Grasslands, and brings you down into Lhasa alongside the beautiful Nyenchen Tanglha Mountains. 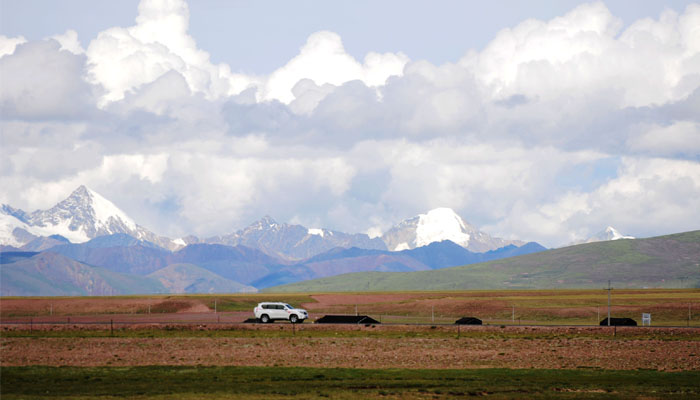 While the road route is hugely popular with Chinese tourists for driving and cycling to Lhasa, the railway route that runs almost alongside the road is the better way to travel this route. Giving you the same opportunity to see all of the amazing sights of the highway, the Tibet train running along the railway can get you to Lhasa a lot faster, and is the best option for international travellers.

Overland from Kunming to Lhasa via Yunnan-Tibet Highway

The overland route from Kunming in Yunnan Province to Lhasa is another amazing scenic drive that will leave you breathless with the sheer beauty of the surrounding landscapes. The route starts in Kunming, and passes north through Lijiang, Shangri-La, and Deqen, to join the G318 Sichuan-Tibet Highway at Markam.

While the road from Markam to Lhasa is stunning, the route up from Kunming is just as beautiful, passing through the Hengduan Mountains that fringe the western edges of China. Similar to the road from Chengdu, this is a route that is best driven in spring and autumn, as the winter is too cold and icy, while summer can be too wet and dangerous.

With five amazing routes to take to get into Tibet overland, you are spoilt for choice. Admittedly, some of the routes are not always open to international tourists, but there are enough options for foreign travellers to make this one of the best ways to enter Tibet. So, if you are considering taking an overland trip to Lhasa, you can now make an informed choice, and get the right route for you.

Be the First One to Comment "Road to Tibet: How Can I Travel to Tibet by Overland?"