As one of the most spectacular drives in the world, the road from Chengdu, the provincial capital of Sichuan Province in Southwest China, to Lhasa, the capital of Tibet, is a winding route that takes you through some of the most stunning countryside in China and Tibet. A vast journey that crosses more than 2,000 kilometers, there are two routes to take along the Sichuan Tibet Highway, the Northern Route and the Southern Route.

The Southern Route is the more popular of the two, traveling in more or less a straight line from Chengdu to Lhasa. Praised to be the most beautiful road to Tibet, the Southern Route passes through an ever-changing landscape on its long journey to Lhasa, through canyons and valleys, over mountain passes and endless grasslands to reach its final destination. The Northern Route, on the other hand, takes a very roundabout route to get to Lhasa, heading northwest through Danba, Chamdo, and Nagqu to finally drop down towards Lhasa along the route of the Qinghai Tibet Highway.

The Northern Route of the Sichuan Tibet Highway follows the G317 from Chengdu to Lhasa along a longer route than the Southern Route, covering a distance of around 2,293 kilometers. The Northern Route is renowned for its pristine scenery and outstanding mountain views, and runs through some of the best and most stunning landscapes in Chamdo and Nagqu.

The route of the Northern G317 highway takes you from Chengdu to Dujiangyan, Rilong, and Danba, skirting around Mount Yala, then heading northwest through Daofu, Luho, and Ganzi to reach Xinlu Lake and Dege. As you pass through Chamdo Prefecture, you will head through Jomda and Qamdo, as well as Riwoqe and Dengqen to enter Nagqu and travel on to Baqen and Nagqu City, from where you will pass nearby Lake Namtso and follow the road south through Damxung to Lhasa. 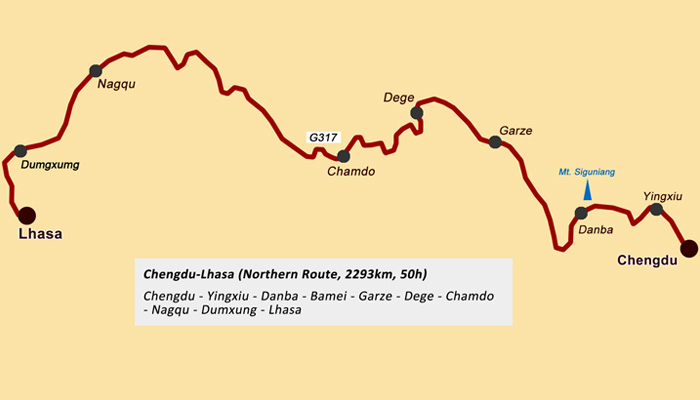 The change in altitudes is quite high for this route, and from your starting altitude of around 500 meters in Chengdu, you will reach altitudes of more than 4,000 meters at many points along the road. The route also takes you past some rather high mountains, including Mt. Yala at 5,820 meters and Mt. Quer at 6,168 meters.

The Northern Route to Lhasa along the G317 is a relatively new route option for drivers to Lhasa, and has not had the publicity and experience of the Southern Route yet. However, this is changing now as more and more people are starting to explore the alternative routes to Lhasa, discovering the hidden gems that Western Sichuan and Eastern Tibet have to offer.

The Southern Route of the Sichuan Tibet Highway is the shorter and more popular road to Lhasa from Chengdu, and stretches for around 2,149 kilometers up onto the plateau and across the Lhasa, the capital of Tibet. Renowned for being the most scenic and the route with the most varied landscape to Tibet, the Southern Route is a favorite road for many drivers heading for the Tibetan capital, with its winding climbs up into the mountains, its numerous switchbacks and hairpin bends, and the absolutely stunning scenery that changes with every mile you travel. 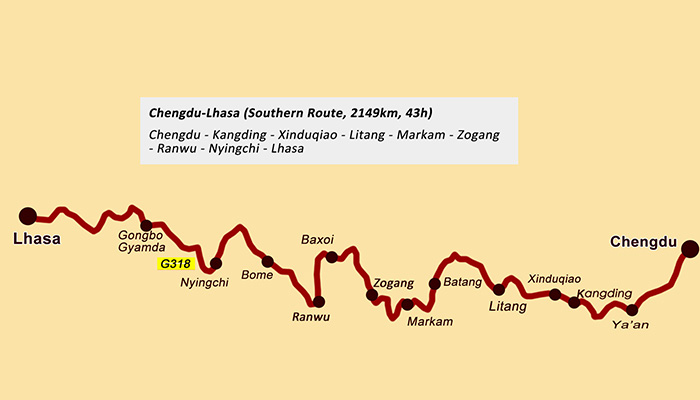 The Southern Route along the G318 National Highway to Tibet starts in Chengdu, the capital of Sichuan Province, and heads almost due west, through Ya’an and Luding, before climbing slightly to reach Kangding and the amazing village of Xinduqiao, the highlight spot for photographers. From there is heads on east, continuously climbing higher and higher as it passes through Litang to enter Tibet at Markam. As you pass through Nyingchi Prefecture, the route takes you through Bangda, Basu, and Bomi, before hitting Nyingchi City, then continuing through Gongbo’gyamda County and the Basum Tso, before finally reaching Lhasa.

The altitude changes along the Southern Route of the Sichuan Tibet Highway to Lhasa are huge in some places, and small in others, depending on where you are along the road. Starting from Chengdu at around 500 meters above sea level, the road starts to climb soon after leaving Ya’an to the west of Chengdu, and by the time it reaches the Erlangshan Tunnel, it is already more than 2,000 meters above sea level. The boundary between the mountain area of Sichuan and the Qinghai Tibet Plateau is at the Mount Zheduoshan Pass, which sits at 4,298 meters, and is the highest point in the lower end of the route. At Xinduqiao the altitude reaches around 3,300 meters, but by the time you reach Nyingchi, you have already dropped again to 3,100 meters. This up and down altitude ranges along the entire length of the route, until you reach Lhasa at 3,656 meters.

The road from Chengdu to Lhasa along the Southern Route of the Sichuan Tibet Highway is a relatively old road that has had a recent facelift. Once, most of the route along this road was gravel or dirt roads, with only a few short stretches of tarmac. Now, thanks to extensive construction work along the highway to make it safer for drivers, almost the entire route is now asphalt, although there are some stretches that are not as good as you might expect. 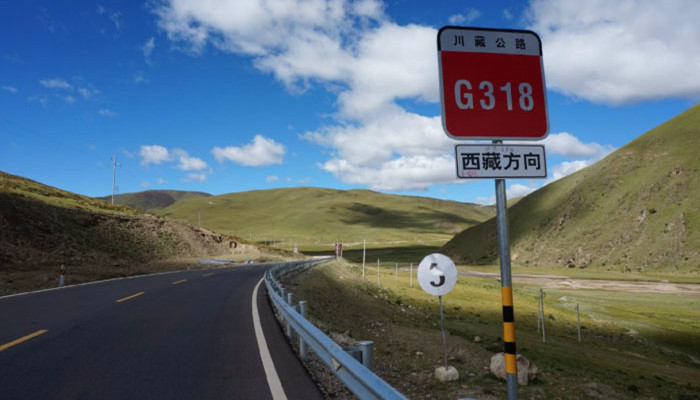 Almost the entire route of G318 road is now asphalt.

Previously, the sand and gravel sections were found between Markam and Nyingchi, but these have now been fixed to become good solid roads. The main concern about this route is the tendency to suffer from mudslides and landslides, which can damage the roads and flooding that often washes away the roads from underneath. The constant running of trucks along this route can also damage the roads, and it is hard for the construction crews to keep up with the damage that is caused by these factors.

Located in Danba County, this unique Tibetan community is one that encompasses all that was once originally Tibetan, and is a great place to learn more about the Tibetan Buddhist culture. Here, Tibetans live in the same way that their ancestors did, albeit with some modern conveniences. One of the few places where the traditions and culture of ancient Tibet are still held in strong regard, this is a must-visit location for tourists. 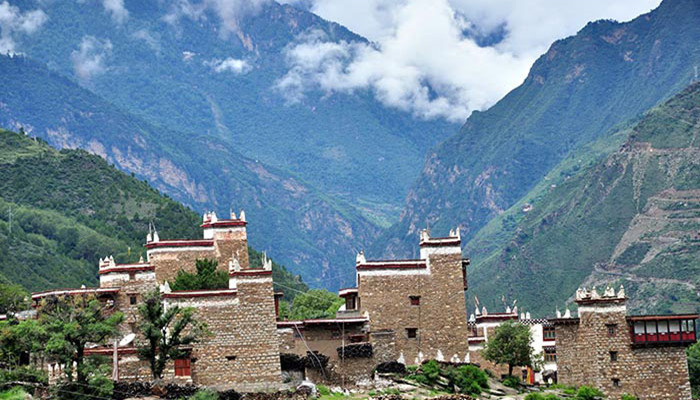 Located around Tagong Town in Garzê Tibetan Autonomous Prefecture of Sichuan, the Tagong Grassland is a vast area of highland prairie that sits at an average elevation of around 3,900 meters. Covering more than 700 square kilometers, it is one of the few places where you can see the Tibetan nomads riding horses to herd their yaks.

Laying a couple of kilometers north of Garzê Town, the Kandze Monastery is located on the hilltop overlooking the town and houses around 700 Buddhist monks. Built in the 17th century by Qosot Mongols to overlook their local castles, it is the largest monastery in Kham, and is home to three tulkus, instead of just one. 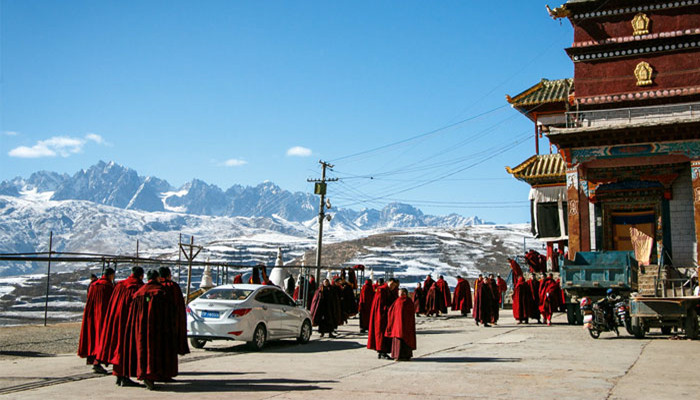 Known as the Heavenly Lake in Tibetan, Lake Namtso lies to the north of Lhasa in Damxung County, and is one of the Great Three Sacred Lakes of Tibet. The highest saltwater lake in the world, at an altitude of 4,718 meters above sea level, the lake is also the largest in the TAR and the second largest in China. Lake Namtso is also a popular destination for pilgrims from all across Tibet, and site between the Nyenchen Tanglha Range of mountains and the vast Changtang Grasslands of northern Tibet.

Renowned as the “last pure land on our blue planet”, Daocheng Yading Nature Reserve was cited thus by the American adventurer for the National Geographic who spent many years traveling in the area of Western Sichuan and eastern Tibet, Joseph Rock. A huge scenic area that contains three sacred mountains in Tibetan Buddhism, Chenrezig, Jambeyang and Chanadorje, this scenic area is beyond compare anywhere in the world. 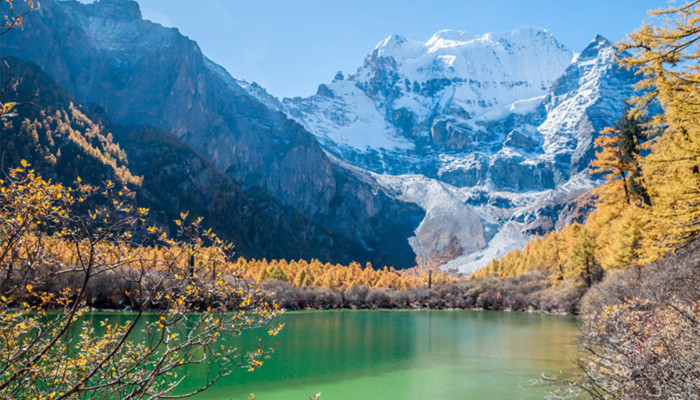 A small and peaceful town in the Tibetan area of western Sichuan, Xinduqiao is well known for being a photographer’s paradise, thanks to the stunning views that can be found in and around the village. The vivid Tibetan houses, lush green grasslands, bubbling streams, and snow-clad mountains make for some of the best photographs that you will ever take.

Nyingchi Town in Nyingchi Prefecture is better known as Bayi District, although mostly it is known as simply Nyingchi. The prefecture as a whole is the garden of Tibet, with its lower altitudes that make it ideal for growing crops, and the milder climates, much like the lower Alps in Switzerland, make it a comfortable place to visit for tourists from the west. 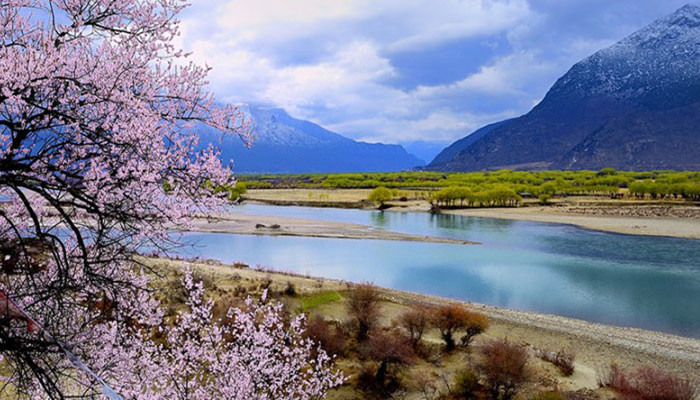 Rated as being one of the top six most beautiful glaciers in China, Midui Glacier is a bright pristine white all year round, and is a typical marine-monsoon glacier that has many forms, including ice falls, snow slides, giant ice basins, and spectacular ice bridges that arch over the landscape.

Located at an altitude of 3,538 meters, Basum Lake is surrounded by mountain ranges and lush trees, set in a deep valley like an emerald embedded in the landscape. Famed for its astounding scenery, this unique lake is also a holy lake of the Red Sect of Tibetan Buddhism, and its turquoise green waters reflect the stunning mountains it sits under.

While most of Tibet has no “best” time for touring around the region, there are certain times of the year when it is considered better to take the long drive along the Sichuan Tibet Highway to Lhasa. Ideally, from May to October is the best time to travel this road, though you might want to think twice about driving it in July and August, the wettest months of the year, due to frequent mudslides caused by monsoon rains.

Apart from the wettest month, mid-March to May is a time when there is less rain and warmer weather. Much of the route can get snow-bound in the winter months from December to March, when taking this route across the mountains to the plateau can become even more dangerous.

If you are planning a trip to Lhasa from Chengdu, then you can do no better than to take a car and drive there. Self-drive tours, which actually have a driver go with you, can be taken from Chengdu, covering 12-15 days, in which time you will travel the entire length of the Sichuan Tibet Highway, with its winding turns, high mountains, and lush green valleys. Flights may be faster, and trains may be more comfortable, but this epic adventure is the journey of a lifetime.