Sichuan Tibet Railway: A Faster Train Ride to Lhasa from Chengdu in the Future

Currently, the only way to get to Lhasa by train from Chengdu is to take the famous Tibet Trains that take you along the scenic Qinghai Tibet Railway. But this will not always be the case, and in a few years’ time, you will be able to travel in a direct line from Chengdu to Lhasa by train. This is the upcoming Sichuan Tibet Railway, which will eventually be the shortest railway connection to Tibet, instead of one of the longest via the Qinghai Tibet Railway.

Sichuan Tibet Railway is Under Construction

The Sichuan Tibet Railway is still currently under construction, and is not expected to be completed before 2026, though some experts say it could be as late as 2030. Construction began on the opposing ends of the railway line back in 2014, and the first section of the line is already completed and open for use.

An Express Railway to Tibet

One of the advantages of the railway from Chengdu to Lhasa will be the reduction in the time it takes to travel from Sichuan Province to the Tibetan capital for any problem about your Tibet tour in November.

travel from Sichuan Province to the Tibetan capital. The current route covers a distance of 3,070 kilometers and takes around 36 hours to reach the Tibetan capital. The new line running direct through western Sichuan and Nyingchi will reduce time by reducing the length of the journey to around 1,629 kilometers, which is less than the route from Xining to Lhasa, the main part of the Qinghai Tibet Railway. 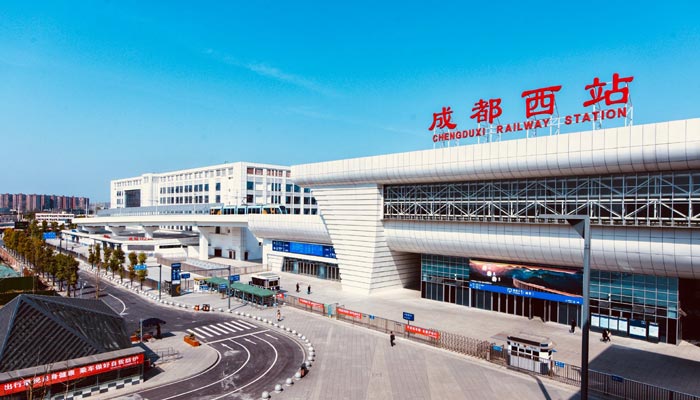 The line begins in Chengdu West Station, and the first part of the line will follow the route from Chengdu to Ya’an, a section that covers around 140 kilometers. The second section will run from Ya’an to Kangding, in western Sichuan’s Garzê Tibetan Autonomous Prefecture. This section will cover a distance of around 193 kilometers, and both of the first two sections will consist of high-speed electric tracks. And while the Ya’an to Kangding section is still under construction, the Chengdu to Ya’an section is already completed.

The third section will run from Kangding to Nyingchi City, in the easternmost prefecture of the Tibet Autonomous Region. Covering around 1,000 kilometers in length, this is the longest and most complicated section of tracks to be laid, passing through mountains in the eastern ends of the mighty Himalayas. The route will run roughly parallel to the G318 Sichuan Tibet Highway, and will pass through Litang, Zogang, and Bomi on its long route to Nyingchi. Construction began on the third section from Kangding to Nyingchi is late 2019, and is expected to last for around 7-8 years before completion.

This final section of the line will run from Nyingchi City to the Tibetan capital of Lhasa, and make the travel between these two popular tourist destinations much faster. Covering a distance of around 434 kilometers, the line will pass directly through the mountains, with around 75 percent of the tracks being made up of bridges and tunnels. The Milin Tunnel, said to be the last and hardest part of the section from Nyingchi to Lhasa, was completed in April 2020, but the line is not set to open yet until 2021.

Section from Chengdu to Ya’an has been completed

The primary section of the line from Chengdu West Station to Ya’an has already been completed, and has been in operation since December 28, 2018. Since its completion, it has been an essential route for travellers heading into the area west of the Sichuan capital. And with its design speed of around 200 kilometers per hour, it has dramatically reduced travel times. With a travel distance of around 140km, the six pairs of high-speed trains per day take around 1 hour to 1 hour 30 minutes to make the trip.

The line passes through 11 stations along its length, including Wenjiang, Chongzhou, Dayi, Qionglai, and Pujiang, stopping briefly for pick-ups at all main stations. On average, the tickets for the trip from Chengdu to Ya’an cost from around eight dollars per person for a second-class seat. The train to Ya’an makes it the perfect jumping off point for exploring the area around this ancient 2,000 year old city, as well as the famous Bifengxia Panda Center.

Other Available Ways to Travel from Chengdu to Lhasa

While the Sichuan Tibet Railway is still in construction, there are plenty of other ways by which you can travel from Chengdu to Lhasa. And while some of them may still be a lot longer, they still have some amazing benefits, not the least of which are the amazing views.

Listed as being one of the most popular train routes from mainland China to Lhasa, the Chengdu to Lhasa train is an amazing journey of adventure and discovery unlike any other in the world. A journey of around 36 hours 18 minutes, which covers a distance of 3,070 kilometers, the train from Chengdu to Lhasa is a hot travel route in China with international tourists.

Trains from Chengdu to Lhasa depart every other day, with six months of the year being on even days (2nd, 4th, 6th, etc.) and the other six months on odd days (1st, 3rd, 5th, etc.). The trains are equipped with three types of seating classes, from Hard Seats and Hard Sleepers to the luxurious first-class Soft Sleepers, the most expensive way to travel. However, it is still cheaper than traveling by flight, so is well worth the cost. 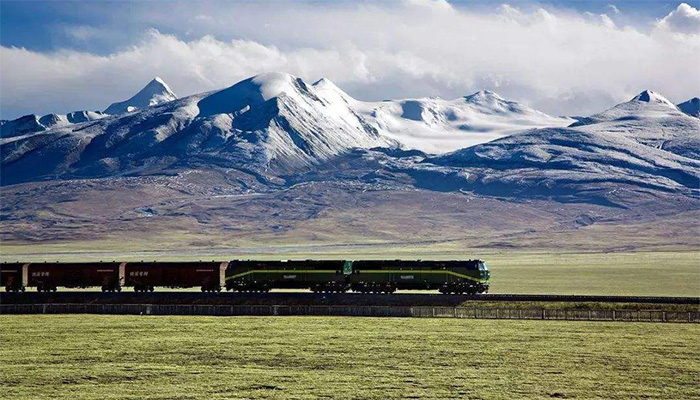 Traveler can take the Qinghai-Tibet Train to visit Tibet from Xining.

From Chengdu, the train heads in a loop to reach the plateau, passing through Guangyuan, Baoji, Lanzhou, Xining (the start of the Qinghai Tibet Railway), Delingha, Golmud, and Nagqu. Crossing over two high mountain ranges and the highest railway pass in the world at Tanggula, this amazing route has some of the most outstanding views of any train ride anywhere in the world.

Another option for traveling to Lhasa from Chengdu is to take an amazing overland trip. Probably the most beautiful overland journey on the planet, the road route from Chengdu to Lhasa takes you through mountains and valleys in the eastern end of the mighty Himalayas. However, this is not a trip you can take on your own. Due to the restrictions on international tourism in Tibet, you will need to book a tour with a registered travel agency to take this trip. 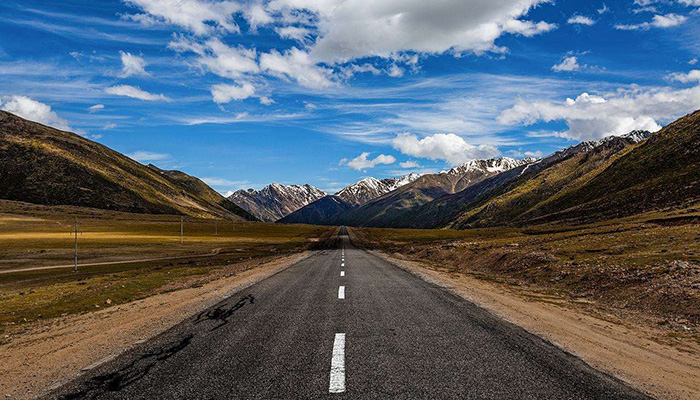 The tour follows the route of the infamous G318 National Highway, parts of which are rated as some of the most dangerous roads in the world. That said, on a pre-arranged tour, your driver is experienced in driving this route, so you will be very safe. The road heads west from Chengdu, passing through Kangding and Xinduqiao, before crossing into Tibet at Markam, and continuing on through Zogong, Bomi, and Nyingchi to Lhasa.

Covering an immense distance of 2,146 kilometers, the overland trip from Chengdu to Lhasa takes you up into the eastern mountains of the Himalayas, and through diverse natural landscapes that are the locations of many small Tibetan communities and villages. The road through Nyingchi reaches altitudes of just over 5,000 meters in places, and passes such amazing sights as the Midui Glacier, Rawu Tso, and the beautiful and sacred Basum Tso.

Chengdu to Lhasa by Flight

Chengdu has many daily direct flights to Lhasa, with the earliest flights starting at less than 6 a.m. and continuing until 10 p.m. The average flight time is only about two and a half hours. If you are in a rush without surplus time, you can choose to take the flight to Tibet from Chengdu. 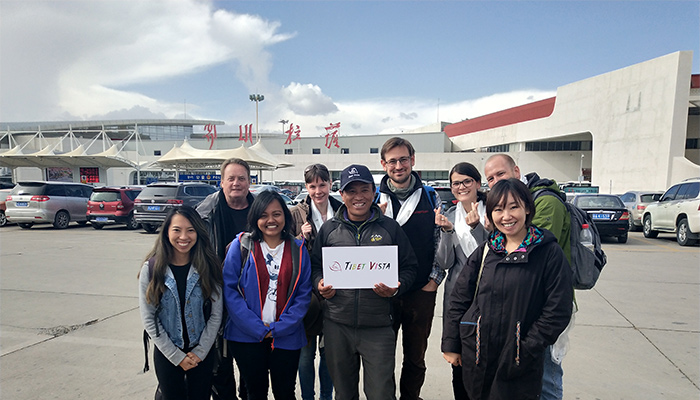 Our Tibetan guide will pick you up at Lhasa Gongga Airport.

The main airlines operating the Chengdu to Lhasa flights are Tibet Airlines, Air China, Sichuan Airlines. The flight departs from Terminal T2 of Chengdu Shuangliu International Airport, which is located 16 km southwest of Chengdu. Passengers can take a taxi, or metro line 10 or airport shuttle bus to directly to the airport from downtown.

The Sichuan Tibet Railway may not be ready to be used for several years, but that does not mean you cannot take a train to Tibet. The Qinghai Tibet Railway will still be in use for many years to come, and will bring tourists to Lhasa continuously as one of the most popular routes to Tibet. And if you want to try a different means of travel while you are waiting for the new railway to open, then you can try the overland road trip to Lhasa, an adventure of epic proportions. In the meantime, check out the Chengdu to Ya’an section, and explore Western Sichuan before going to Tibet.

Read More about Sichuan Tibet Railway: A Faster Train Ride to Lhasa from Chengdu in the Future

Be the First One to Comment "Sichuan Tibet Railway: A Faster Train Ride to Lhasa from Chengdu in the Future"