How to Travel to Tibet from United States

As one of the largest groups of tourists to Tibet every year, travelers from the United States can get to Tibet relatively easily, thanks to the high number of flights to Chinese cities from cities across the United States, many of which run direct into China without stopovers. More than a million American citizens travel to the region every year, mostly in spring and autumn, when the weather is at its best for trekking and sightseeing. One of the biggest draws for American travelers is the trip to Everest Base Camp from Lhasa, the most popular attraction on the plateau. Here we explain just how easy it is to get to Tibet from the United States and the best options for travel.

Option 1: US to Tibet via Mainland China

When traveling to mainland China from the United States, tourists can choose from a number of departure and destination cities in both countries. Flights from the United States depart from a huge number of airports across the country. In the Pacific Time Zone, flights depart from Seattle, Los Angeles, and San Francisco, while in the Mountain Zone, they run from Phoenix, Denver, and Salt Lake City. For flights from the Central Time Zone of the US, departures run from Dallas, Michigan, Chicago, and Mississippi, and from the Eastern Seaboard, the flights depart from New York, New Jersey, Miami, Tampa, Washington DC, and Philadelphia.

US to Mainland China by Flights

For flights to mainland China, you can fly into Chinese cities such as Beijing, Shanghai, Guangzhou, Chengdu, Chongqing, Xi’an, and many others. Many of the arrival locations from the US are gateway cities to Tibet for either trains or flights, and you can even get a direct flight to Hong Kong and travel into mainland China from there to get to Tibet. Flights to China can take from 14-18 hours, depending on the departure and arrival airports, and can cost from 350 to 1,500 dollars per person.

Mainland China to Tibet by Trains or Flights

If you are planning on taking a flight to Lhasa from mainland China, then you have a wide range of options for the departure cities. Regular direct flights to Lhasa Gonggar international Airport from Beijing, Chengdu, Xi’an, Chongqing, Xining, and Shangri La, among others, while you can get indirect flights, with just one stop in Chongqing or Xi’an from Shanghai and Beijing every day. 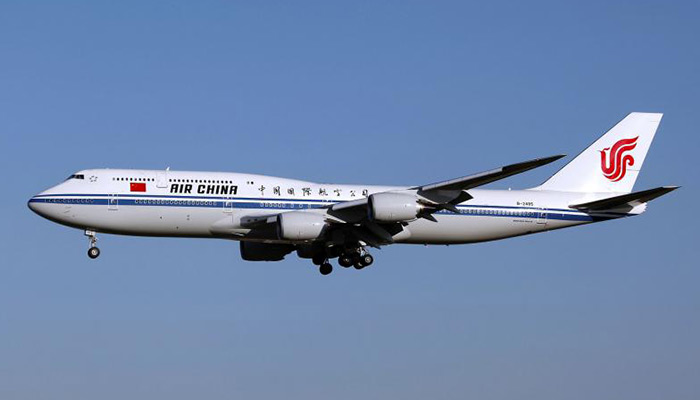 One can take the flight to Tibet from major cities in mainland China.

Chengdu is the most popular departure city for Lhasa, and has the highest number of daily flights to the Tibetan capital, taking around 2 hours 30 minutes to cover the 2,000+ kilometer distance. Beijing is also a popular departure location for Lhasa, with regular flights running direct, or cheaper connecting flights running through Chengdu, Xi’an, and Xining daily. Flights are the fastest and most convenient way to get to Tibet, and take up to 6 hours at most. However, they are more expensive.

There are seven gateway cities offering the trains to Tibet from mainland China, which include Guangzhou, Beijing, Shanghai, Chengdu, Chongqing, Lanzhou, and Xining. There is also the option of departing on the train from Xi’an, though this can only be done in the low season, as the trains from Xi’an actually starts in Guangzhou and Shanghai.

While the flights are faster, they are more costly than the trains, with the average train fare costing less than half of the average flight ticket from the same city. Trains are slow, however, and can take from 21 hours to as much as 53 hours to reach the plateau capital.

Option 2: US to Tibet via Nepal

Once you arrive in Kathmandu, you will then have the option of traveling to Lhasa by different means. You can fly direct to Lhasa, as Kathmandu is the only international airport with direct flights to the Tibetan capital. However, the best way to get to Lhasa is to travel overland, on the epic journey across the Sino-Nepal border at Gyirong Port, into one of the most beautiful valleys in the world. Not only can you acclimatize along the way to Gyirong Town, the first stop on the tour inside Tibet and a great place to spend a day acclimatizing, but you get to visit the outstanding Everest Base Camp (EBC) first, after leaving Gyirong. 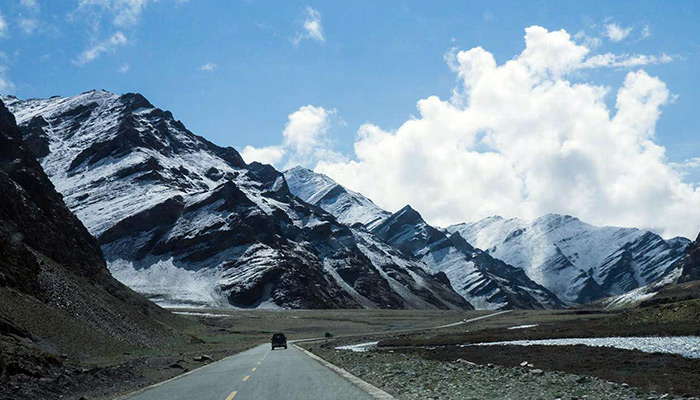 It is classic to travel from Nepal to Tibet by overland.

This allows you to get the highest altitudes out of the way, so that the rest of your trip is descending across the plateau, which is actually easier than ascending in the other direction. And when you get to Lhasa, instead of taking it easy to acclimatize, you can better enjoy the stunning sights of the Potala Palace and Jokhang Temple without worrying about altitude sickness.

Required Documents for Travelling to Tibet from US

All tourists to China’s Tibet Autonomous Region are required to have a visa, and American citizens are no exception. However, getting a visa is not as hard as it may first appear. For those entering Tibet from mainland China, you can get a Chinese Entry Visa from the Chinese embassy or consular office in the nearest state to your home state, which normally takes just three working days to process. For those that are too far from a state with an embassy or consular office, you can send your visa application in via mail using USPS, and including a pre-paid return envelope. Your visa will be sent to you by return mail in around seven days.

For those entering from Nepal, you do not need to get the visa in advance of booking your tour, as it is a different visa from the normal one for entering China. The visa for entry from Nepal is known as the Chinese Group Visa, and is issued once you arrive in Kathmandu, our representative will come to your hotel to collect your passport and completed application form and make the application on your behalf at the Embassy in the city. Only agents of registered Tibet travel Agencies can make the applications for the Group Visa, as personal applicants are not accepted. The visa takes just three working days to process, and is normally ready on the third day from application (apply on Monday before 11:00am, and the visa will be ready for collection on Wednesday morning).

The Tibet Travel Permit (TTP) is the main permit that you will need to enter and travel around Tibet, though it is only valid on its own for travel in the area of Lhasa city-level prefecture. The permit is applied for by us once you have booked your tour, and we will use scanned copies of your passport (and visa for those entering from mainland China) to make the applications with the Tibet Tourism Bureau in Lhasa.

Processing can take up to15-20 days, so it is essential that you book your trip with enough time to obtain all the relevant permits and passes. The Tibet Travel Permit is also required to book and board flights and trains to Tibet, and will be checked at several points between entering the station/airport and sitting in your seat.

Aside from the visa and TTP, you will also need a number of other documents, depending on where your tour of the plateau is taking you. The Alien’s travel Permit is required if you are planning to travel outside Lhasa to the “unopened” areas of Tibet, such as Shigatse, which includes Mount Everest Base Camp (EBC). You will also need to have the Frontier Pass for travel to EBC, as it lies near the border with Nepal. All trips to areas close to China’s borders with Nepal, India, and Bhutan require this pass to be present and complete before departing from Shigatse. 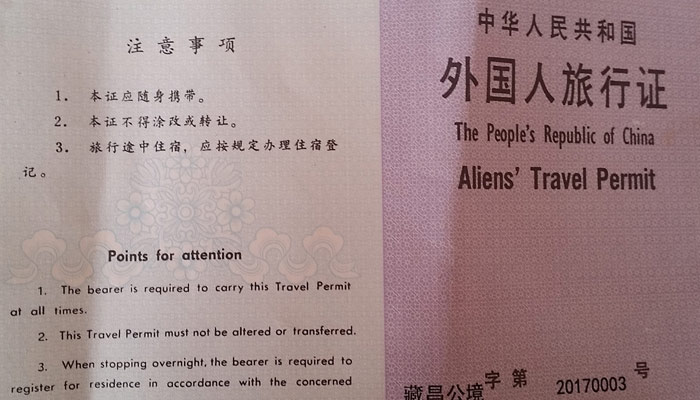 For travel into the more remote areas of Tibet, which include Nyingchi, Nagqu, and Ngari, you will also need the Restricted Areas Permit. Often called the “Military Permit”, this is required for the areas of Tibet that are classed as military sensitive areas. The permit is mostly issued for travelers heading to Mount Kailash for the amazing Kailash Kora trek, or to Nyingchi for the awesome Peach Blossom Festival.

All of these permits and passes are arranged for on your behalf by us, as they cannot be applied for in person. For the TTP and Military Permit, we will make the applications once you have booked your tours, as they take the longest to process. The Alien’s Travel Permit and the Frontier Pass are normally obtained in Lhasa or Shigatse by your guide, and take less than an hour each to process.

For anyone with a desire to travel from the United States to Lhasa and the rest of Tibet, it is really easy to arrange. All you need to do is contact us with your travel and tour requirements, choose one of our amazing Group Tours or customize your own itinerary, and send us scanned copies of your passport. We will do all of the rest of the world for you, and can even arrange your accommodation in Tibet and China, as well as booking your flights or train tickets to Lhasa for you. Let us take care of all your needs and come visit us in Tibet.

US to Tibet Route Map Guide

Distance from US to Tibet:

1) US - China - Tibet: First take flight from US to China; then take train or flight from mainland China to Lhasa.

2) US - Nepal - Tibet: First take flight from US to Kathmandu, Nepal; then fly or drive overland from Kathamndu to Lhasa.