Known in Chinese as Zhébàng Sì, Drepung Monastery has long been one of the major monasteries of the Gelug tradition of Tibetan Buddhism. An amazing place to visit, this massive university monastery is renowned as being the largest monastery in Tibet, has the largest kitchen of any monastery, and catered to more than ten thousand monks at its height. One of the most popular monasteries to visit on a tour of Tibet, Drepung is normally visited on the 3rd day of most tours to Lhasa, and is one of the Great Three monasteries of the Gelug sect.

Located to the west of Lhasa, on the far side of the Lalu Wetlands around 9km from the Potala Palace, Drepung Monastery sits on the slopes of Gambo Utse Mountain, at an altitude of around 3,800 meters above sea level. Built in 1416 by a disciple of Tsongkhapa, Jamyang Choge Tashi Palden, Drepung is the largest monastery in Tibet and was the original set of the Dalai Lama in Tibet. From a distance, the monastery vaguely resembles a heap of rice lying on the hillside, and the name “Drepung” actually means “collecting rice”.

One of the Great Three Gelug university monasteries in Tibet, the other two being Sera and Ganden, Drepung Monastery is the most important monastery of the Gelug tradition. The monastery was actually named after the sacred temple of Shridhanyakataka, which lies in the Indian state of Andhra Pradesh on the southeastern coast of the country. After its construction, the monastery became the seat of the first Dalai Lamas, until the 5th Dalai Lama moved to the Potala Palace in the 17th century. The monastery is open to tourists from 9:00am to 5:00pm daily, throughout the year.

The monastery is the largest in Tibet, and the amazing buildings reflect this in the architectural styles, using classic Buddhist architecture on the grandest scale. The monastery covers an area of around 250,000 square meters, and at its height, it housed more than 7,700 permanent monks, with another 3,000 visiting monks able to be catered for. 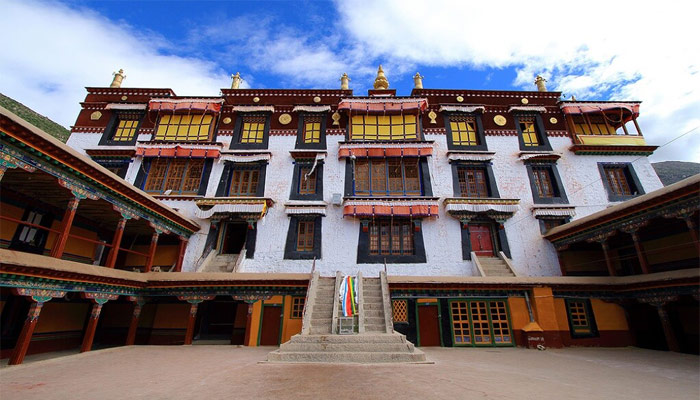 Drepung Monastery is the largest monastery in Tibet.

The layout of Drepung is wholly unique, and was built around the caves of Jamyang Choge, the disciple who founded the monastery. The two white pagodas that stand out were original structures before the monastery was constructed, and serve as the center of the Mandala pattern that spreads out in the form of the Buddhist universe. The central buildings of the Mandala include the Ganden Phodrang Building, the former private residence of the Dalai Lama, and the Coqen Hall. Several Kamcuns, and the four main colleges, extend out around this central core of the Mandala universe, with the monks quarters and the staff quarters around the outside. Drepung originally had seven colleges, which were incorporated into the four that remain today.

The Shoton Festival in Tibet is the top festival in the Drepung Calendar, and is held at the monastery on the 15th day of the fifth month in the Tibetan calendar. The festival heralds from the days of the Indian master, Atisha, in the 11th century, who insisted that all monks go into seclusion in the monasteries for a period of 100 days, known as Yarné, to prevent them from killing any living creatures by walking on the muddy roads in the rainy season. This practice dates back to the time of Gautama Buddha, and is the Tibetan version of Vassa, the Theravada Buddhist practice in India.

At the end of the fasting period, the locals would bring offerings of yak curds to feed the monks and to give thanks in the temples for their sacrifices throughout the long Yarné period. Over the centuries, this changed to be yogurt, and the religious aspects of the festival slowly grew up around the end of Yarné, with other foods also being offered for the monks.

It was not until after Potala Palace was constructed that the end of Yarné became a true Tibetan festival, being held for the first time in the palace grounds in 1682. It was moved to Drepung shortly after, and after the new palace of Norbulingka was built in the 18th century, the festival was opened in Drepung and then the remaining festivities held in the new palace. 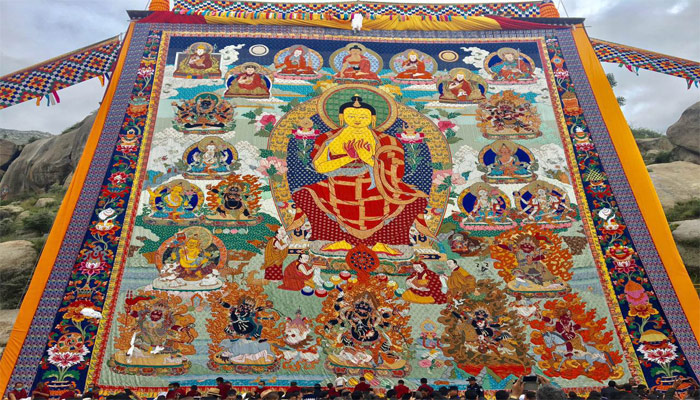 The ceremonies still open in Drepung, with prayers throughout the night before, and then a huge Thangka unveiling ceremony, before the remaining religious ceremonies are conducted. The massive Thangka painting is brought out just after dawn, and carried by Gelug lamas to the Thangka wall on the western side of the monastery. There, it is unfurled with horns and pipes playing, and the smoke of juniper branches wafting across the hillside. Once unfurled, the Tibetan people there throw white hada on the Thangka and pray and touch their foreheads to the hem, to receive the blessings of Buddha.

On the following days, most of the other festivities, including the Tibetan operas, the massive amounts of yogurt to be eaten, as well as the fun and games, normally occur in Norbulingka.

The kora route around Drepung Monastery is one of the grandest in Tibet, in terms of the awesome scenic views from this 3,900 meter high trek. The whole kora route can be covered in around 20 minutes, if you are taking it at a full trekking pace. However, with the stunning views, this is one kora that should be taken slowly, and a casual stroll is the best pace for this unique kora circuit.

The kora route starts at the front of the monastery, and climbs up the hillside to the left, running clockwise around the monastery. As you start the gradual climb, the route passes a number of rocks that are painted with Buddhist designs at the side of the trail, and heads up past the huge Thangka wall to reach the small ridge at the top, festooned with a multitude of prayer flags.

From the crest, the route continues on down the other side of the monastery, passing an encased statue, as well as several more rock carvings and paintings, before heading around the front to the main gates again. The kora at Drepung is best done after properly acclimatizing in Lhasa, to avoid altitude sickness during the climb, which is almost 300 meters above central Lhasa.

Drepung Monastery, being one of the main monasteries in Tibet, is a must-see attraction in Lhasa, and is one of the most popular half-day tours in the Tibetan capital. The best way to visit this unique monastery is on one of our Lhasa group tours, which run regularly to the capital city.

One of the best ways to see Lhasa, our 4-day Small group Tour gives you the chance to wander around the stunning City of Sunshine with other like-minded individuals that are looking for the same things you are. Not only do you get to spend the whole morning exploring this outstanding and massive monastery, but you will also get to visit many of the other major attractions of Lhasa. 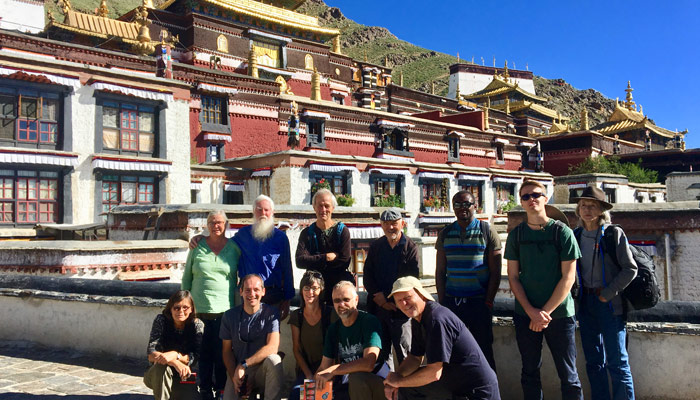 Have a visit in Drepung Monastery.

This short trip to the Tibetan capital also includes visits to the Potala Palace, the iconic landmark of the city and the former seat of the Dalai Lama’s governance of Tibet; the Jokhang Temple, the ancient 7th century temple that was built by Songtsen Gampo and now houses one of the world’s oldest statues of Gautama Buddha, the Jowo Rinpoche; the amazing Sera Monastery, with its unique afternoon monastic debates on Buddhist philosophy and scriptures; and the awesome Barkhor Street, kora route for the Jokhang Temple and the most outstanding shopping area on the Tibetan plateau.

Our guide services, private vehicles, and driver are all included in this brilliant short tour of Lhasa, and the arrangement of the itinerary allows you to acclimatize slowly to the higher elevation before heading out to the outer monasteries.

Drepung Monastery is a religious site of major significance in Tibetan Buddhism, and is a fully working university monastery. It is, therefore, essential that tourists visiting the monastery observe a few rules on behavior, dress, and demeanor whilst touring.

1. It is not permitted for tourists to take photos of the inner temples of the monastery without permission, so ask your guide to let you know where you can and cannot take photos once inside.

2. It is also considered to be rude and disrespectful to touch the monks, especially on their heads, take their photos, or point the soles of your feet at shrines, statues, and altars when sitting.

3. And when watching any of the debates at the monastery, if you are there in the afternoon, then it is recommended to remain quiet, as these are actually lessons for the monks, and important learning.

4. If you are going to attempt the kora around the monastery, it is respectful, though not required, to walk around it clockwise, as this is the way it is done in Buddhism. However, since your guide is Tibetan, and will not walk around it in an anti-clockwise direction, there are normally few people that would try and walk it in the wrong direction.

Drepung Monastery is one of the most outstanding parts of any tour of Lhasa, and its sheer size is daunting, especially as you get closer to the site in western Lhasa. However, with the stunning views from the kora, where you can see across the beautiful Lalu Wetlands all the way to the Potala Palace on a clear day, this is one of the best places in Lhasa for stunning scenery.