Monasteries are a huge part of Tibetan culture, and over the last 1,300 years have been built all over the Tibetan area in China. One of the most iconic parts of the Buddhist religion, monasteries like Ganden in Lhasa are not just homes for monks and lamas, but are a focus for Buddhist beliefs, the center of hundreds of separate pilgrimages throughout Tibet, and important sites for the different traditions of Tibetan Buddhism. Wherever you find Buddhism around the world, you will find the unique and architecturally stunning monasteries, and the Ganden Monastery in Lhasa is no exception.

Located on Wangbur Mountain in Dagzê County of Lhasa, Ganden Monastery lies around 53 kilometers from the center of Lhasa City by road, at an altitude of around 4,300 meters above sea level. The monastery was founded in 1409 by the founder of the Gelug School of Tibetan Buddhism, Je Tsongkhapa, and is one of the Great Three university monasteries of the order in Tibet. The monastery was a place where Tsongkhapa often stayed, and he died there in 1419, and his remains lie in a silver and gold tomb in the monastery. 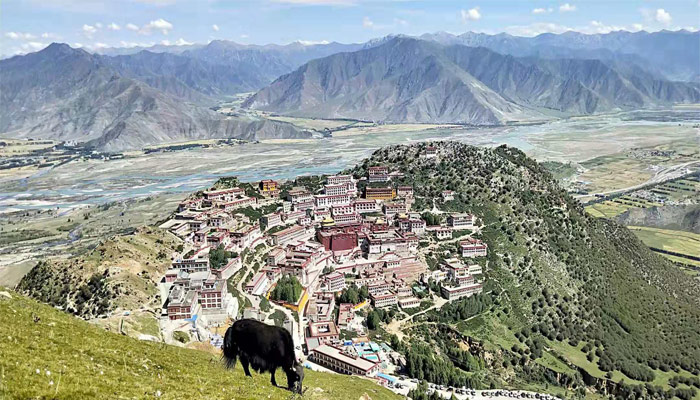 Ganden is the first and primary monastery of the Gelug School of Tibetan Buddhism.

The monastery actually gives the traditions of the Gelug School its name, as the name Gelug is a shortening of Ganden Lug, which means “Ganden Tradition” in Tibetan. For tourists to the site, the monastery is normally open from 9:00am to 4:00pm daily, throughout the year, and can be visited easily as part of a tour of Tibet in Lhasa. Due to the restrictions in tourist travel in Tibet, the best way to get there is with your tour guide and driver.

As the first and primary monastery of the Gelug School, Ganden has always been an important monastery in the region, and offers some of the most stunning views of the Lhasa River Valley. As well as being one of the most stunning monasteries in Tibet, Ganden has some very unique architectural structures, and over the years has grown to become the sprawling complex of buildings it is today.

The monastery consists of a main hall, surrounded by more than two dozen other major chapels, each of which contains a large statue of Buddha. The largest of these chapels was originally able to hold more than 3,500 monks, and at its height, Ganden was home to more than 5,000 Gelug monks. The main assembly hall, known as the Tsokchen Assembly Hall, is a unique white building with gold-coated roofs and surrounded by a large square.

For most tourists, the three main attractions of the monastery are the main hall, the Ngam Cho Kang chapel where Tsongkhapa taught his disciples, and the reconstructed Tongwa Donden ("Meaningful to Behold"), the reliquary chorten that contains the last remnants of Tsongkhapa’s remains.

Ganden Monastery is one of the most exciting and outstanding day-tours in Tibet, and it really is worth it to spend all day exploring this unique and ancient monastery, which has seen the rise of all 14 of the Dalai Lamas. With the monastery having an amazing kora route and being the start of one of the plateau’s best short treks, Ganden Monastery is an amazing day out.

The kora route around Ganden Monastery my not be very long, but it does have one of the most outstanding views of a monastery kora in Tibet. The route around the kora is strung with prayer flags at irregular intervals, and the small prayer papers, inscribed with Buddhist prayers and sutras, blow across the hillside, bringing their blessings to the world on the winds of the Himalayas. 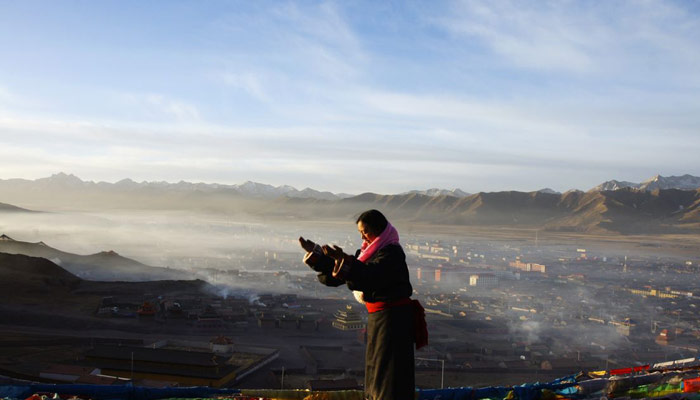 The sincere Tibetan pilgrim is prostrating along the kora of Ganden Monastery.

For anyone that is a fan of being outdoors, this is an ideal opportunity to get in some short hiking, in a land that resembles a patchwork of green and brown, and all surrounded by the high Nyenchen Tanglha Mountains. The kora around Ganden Monastery is actually in two parts, a high and low kora. The low kora follows the rim of the basin in which the monastery lies, while the high kora takes you up the side of the small mountain, and has some amazing views of the surrounding countryside.

With the low kora taking only around 45 minutes to complete, and the high kora just a couple of hours, this is the ideal place to visit for a short trek in the beautiful scenic countryside of the Lhasa River Valley. For the best experience, our 5-day Lhasa and Ganden Monastery small group tour is the perfect trip to take for the best experience of Ganden Monastery from Lhasa.

The famous trek from Ganden Monastery to Samye Monastery is one of the favored short treks in the area around Lhasa. Regarded as one of the best treks in the world, this three-day hike through the beautiful Lhoka countryside is an ideal trek for those with only a short time to spend on trekking. A major pilgrimage route between two of the most important monasteries in Tibet, this is one route that should not be underestimated. The hike may only be three days long, but it starts at more than 4,100 meters, and crosses the high Zhukar La Pass at 5,250 meters above sea level and the Chetur La Pass at 5,100 meters. The climbs are arduous, and the high altitude does make it a tough trek, recommended for only experienced high-altitude trekkers. 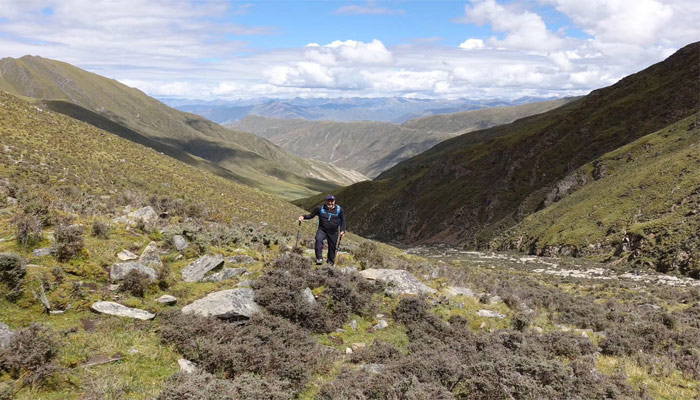 Ganden to Samye trek is one of the favored short treks.

A scenic route that offers some of the best landscape views in Tibet, the trek takes you through the high snowy passes, past shimmering blue lakes and high nomadic campsites, and through remote Tibetan villages to reach the barren desert-like area around Samye Monastery. For the best option on making this unique hike a part of your tour of Tibet, we recommend the 8-day Ganden to Samye Trekking tour, which gives you the best of the sights of Lhasa, as well as giving you time to explore both monasteries before and after the trek.

The Thangka Unveiling Festival at Ganden Monastery is one of the most important ceremonies at the monastery. Tibetan Thangka paintings are an important part of many of the festivals in Tibet, and the unveiling festival for the Thangka is a separate festival that is held on the 15th day of the sixth month in the Tibetan calendar. The festival is held in memory of the enlightenment of Tsongkhapa, the founder of the Gelug tradition and the Ganden Monastery. 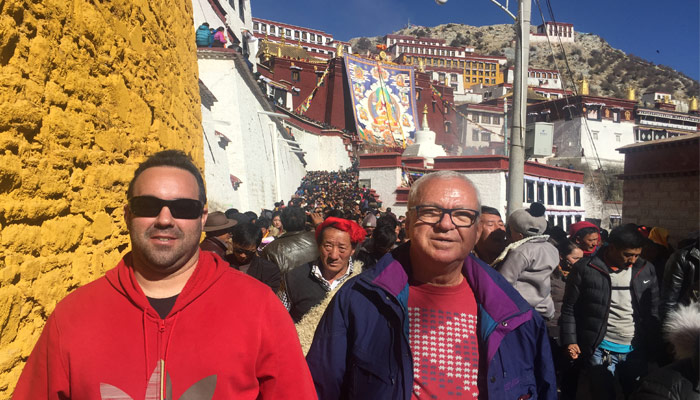 The crowds gather to witness the Thangka unveiling in Ganden Monastery.

Thousands of people gather for the festival every year, to witness the unveiling of this sacred painting which shows an image of Tsongkhapa, surrounded by several of the Buddhist deities and symbols of religious significance. Stretching over 200 feet wide and 150 feet tall, this is one of the largest thangka paintings in Tibet. The crowds gather at the top of the hill before dawn to pray as the sun rises, then make their way to the monastery to witness the unveiling, praying at the hem of the giant thangka and touching their foreheads to the edge in reverence.

Also known as the Tsongkhapa Butter Lamp Festival, the Ganden Ngachen Chenmo is celebrated to commemorate the death of Tsongkhapa, the founder of the Gelug Tradition. The festival is held on the 25th day of the tenth month in the Tibetan calendar, and the famous butter lanterns of Tibet are lit all around the altars and temples of the monasteries of the Gelug tradition in Lhasa. It is also a common sight to see the butter lamps lit in the homes of the local people throughout the day and night.

As night falls on the day of the ceremony, lamas, pilgrims, and tourists crowd around the front of the Jokhang Temple, as the lamps are lit on every wall and rooftop and windowsill in the area. Wherever there is space, you can find burning butter lamps, and it is one sight that you should not miss if you are in Lhasa at the time of the festival.

Ganden Monastery is one of the most important monasteries in Tibetan Buddhism, and holds a special significance in the Gelug tradition. For anyone wanting to visit the monastery, there are a few things to bear in mind.

1. Buddhism is unlike any western religion, and is much more conservative than most religions around the world. It is therefore essential to make sure that women entering the monastery are covered, with no short shorts or skirts, and having their shoulders and upper arms covered and no midriff showing.

3. The best time to visit the monastery is from April to October, when the weather is pleasant enough to take on the kora route. Other prime times to travel to Ganden Monastery is during one of the many festivals throughout the year, which are some of the best in Tibet.

4. The monastery is renowned for its incense making, and incense that is made on the premises by the monks is available for sale. Incense from Tibet is all made by hand in the traditional methods used for over a thousand years. This unique incense makes a great gift for friends and family back home.

If you are traveling to Ganden Monastery, then you are guaranteed to have an awesome experience. As the first and primary monastery of the Gelug School of Tibetan Buddhism, Ganden is one of the most important monasteries in Tibet. Over 600 years old, this unique monastery is renowned as being one of the Great Three university monasteries of the Gelug tradition, and is an awesome and pleasant day out from Lhasa.