The Potala Palace is situated on the Red Mountain in the city of Lhasa, China’s Tibet Autonomous Region. It is the highest ancient palace in Tibet and the world, and the largest and most complete ancient palace complex comprising palaces, castles, and monasteries.

The Potala Palace, regarded as the symbol of Tibet, made up of the White and Red Palaces with their ancillary buildings. This 13-stories-high palace has over 1,000 rooms and covers over 13 hectares. It was the winter palace of the Dalai Lamas from 1649 to 1959. The Potala Palace is regarded as the first must-see attraction in Tibet by tourists. Climbing the steps of the Potala Palace up to the top, you can see the stunning scenery of Lhasa and the beautiful plateau landscape in the distance.

The Potala Palace was built in the 7th century and has a history of 1,300 years. At the beginning of the 7th century, after Srongtsen Gampo moved to Lhasa, he built a nine-story building with a thousand palaces on the Red Mountain, and named it Potala Palace. 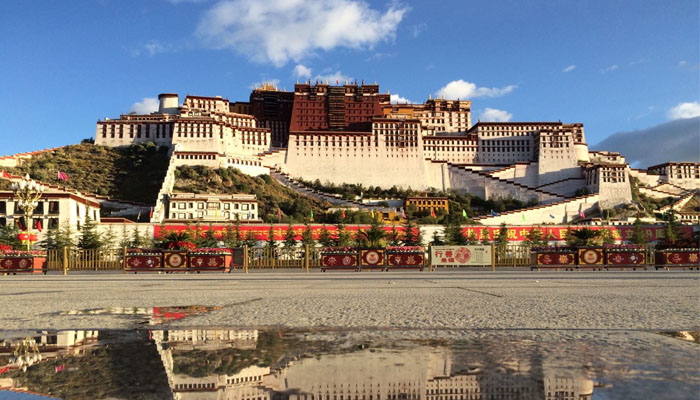 In 1994, the Potala Palace was included in the UNESCO World Heritage List. In August 2015, the Regulations on Potala Palace Cultural Heritage Protection was officially issued, since then, it has been treasured better.

Potala Palace has many things worth seeing: the unique architectural style, the beautiful murals inside the palace, the exquisite artworks and various kinds of religious treasures, etc. Wandering in the Potala Palace, you will enjoy getting lost in the splendid Tibet history.

The White Palace once was home to the Dalai Lamas, and also served as the office building of Tibet local government. The white wall symbolizes peace. The original White Palace was built during the lifetime of the Fifth Dalai Lama, he and the government moved into it in 1649. Finally, it was extended to its size today by the thirteenth Dalai Lama in the early twentieth century. The seventh floor of the White Place is the living quarters of Dalai Lama. It consists of two parts named the east sunlight hall and the west sunlight hall, because of the plentiful sunshine. The fifth and sixth floors are used as the living quarters and offices. Major events at the Potala Palace are held on the fourth floor. 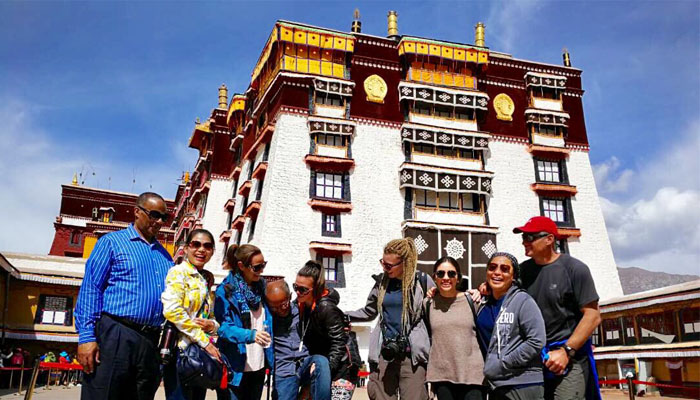 The white palace in Potala Palace.

The golden roof group is a unique view of the Potala Palace. It's on the top of the Red Palace and made up of seven roofs made of gilded bronze. They are the top of the Dalai Lama's holy tower. Every golden roof is decorated with flower-and-bell-shaped spires as lightning rods. 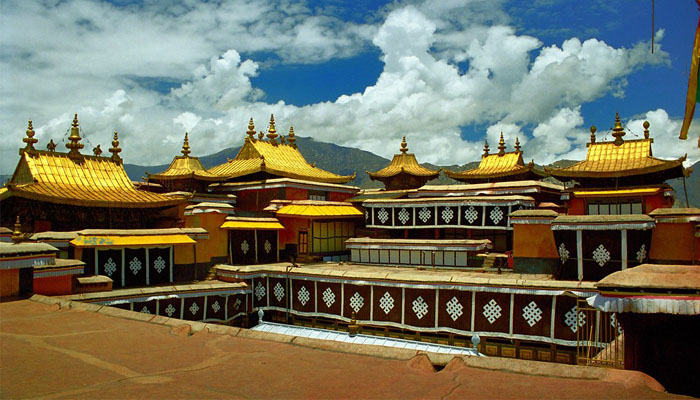 The golden roof group is a unique view of the Potala Palace.

The murals, paintings and sculptures of the Potala Palace are unique, showing the fine traditions and high artistic achievements of the ancient Tibetan people's architectural art.

The walls of all the palaces, temples and corridors of the Potala Palace are painted with murals. The murals have a wide range of subjects, including historical figures and stories, religious myths, Buddhistic stories, folklores, sports, entertainments and so on. Those murals have a high historical and artistic value.

Apart from murals, you can also find a huge number of exquisite Tangkas. "Tangka" is one of the most Tibetan-style paintings. It framed by colored satin, and painted on silk, cloth or paper. It mainly tells about the Tibet history events, religious figures, and Buddhist doctrines.

The sculpture art of the Potala Palace combines different Buddhist art techniques of the Chinese, India and Nepal. A large number of sculptures are kept in the Potala palace, including clay sculptures, wood carvings, stone carvings, and metal statues.

Besides, there are also a lot of handicrafts with strong religious overtone and Tibetan art style, such as Tibetan carpets, prayer flags, and drapery. 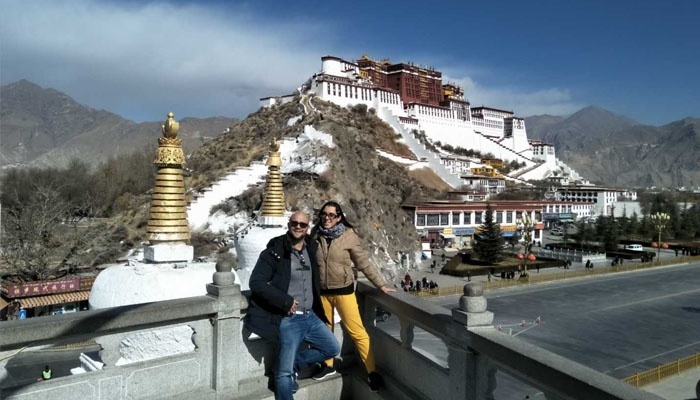 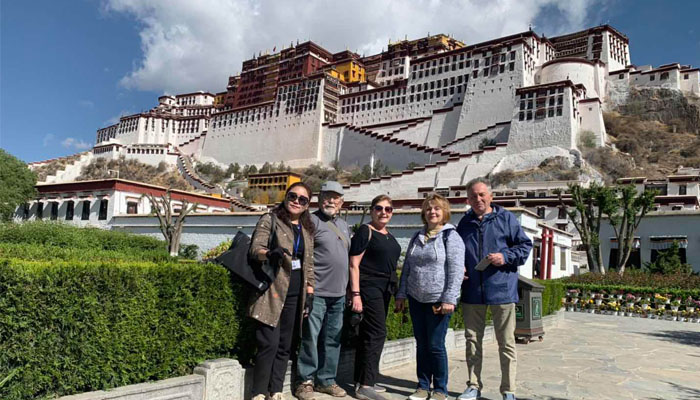 The Lalu wetland reserve is the largest and highest natural wetland in Tibet, covering 6.2 square kilometers. Lalu wetland provides a perfect inhabit for diverse faunas and floras. The solemn Potala Palace and beautiful natural landscape constitute a picturesque landscape for you to snap awesome photos.

Jokhang Temple, located in the center of Lhasa, is a good place to witness the Buddhist culture and atmosphere. It is not only the earliest wooden architecture in Tibet but also the most glorious building during the Tupo Kingdom period. Standing on the roof of Jokhang Monastery, you can see the stunning view of Potala Palace. 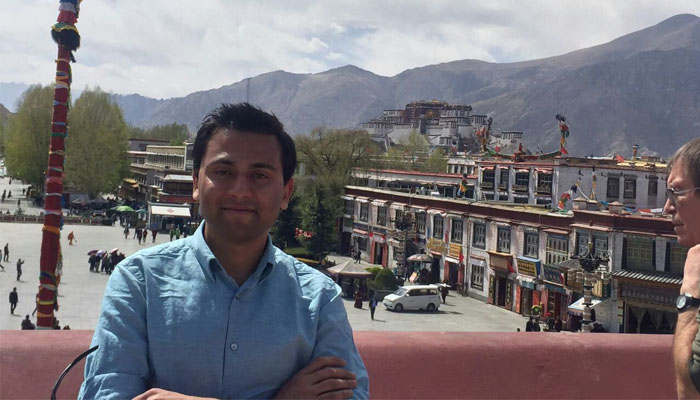 The theater of princess Wencheng lies in the southern bank of Lhasa River, it is a good place to photograph the sunrise and sunset views of the southeast side of Potala Palace.

1. Due to the high altitude, taking an overcoat even in summer days while visit Potala Palace, as it is a bit cold and damp in the hall.
2. The travel route here is set strictly. Visitors have to enter from the east main entrance.
3. The visit time is limited in 1 hour.
4. Any kind of liquid is not allowed, including beverages and mineral water, which yet can be purchased at a cost of CNY10 for one bottle at the hilltop.
5. Smoking is prohibited and cigarettes are not allowed to be taken into the Potala Palace.
6. Since Potala Palace is an important Buddhist site, tourists should be aware of the taboos of Tibetan Buddhism during the visit. Don't point your fingers at the statues; don't wear a hat or sunglasses; don't step on the doorsill.
7. No photos! Photography, video equipment, and other recording devices are not allowed, due to the sacred nature of the site and the relics held within the palace.
8. The only toilet is on the right side of the White Palace Square, and there is no restroom during the route of the rest time. The water closet is said to be distinctive and worth a try.
9. Please do not make any big moves while climbing the Potala Palace. The average altitude is above 3,700 meters, and is still a small challenge for some tourists.
10. If you want to have a better travel experience of Potala Palace, you can join our Lhasa tour. Our experienced Tibet tour consultant will help you arrange the best tour according to your need.

The Potala Palace will be one of the most extraordinary sights of your visit to Lhasa. It is not only an architectural wonder, but also a treasure house where you can see precious arts and experience Tibetan culture and history.