As one of the most devout Buddhist locations in the world, Tibet is renowned for its great monasteries, and none are more revered and important in most Tibetan Buddhism than the Great Three university monasteries of the Gelug Tradition in Lhasa. Built in the early part of the 15th century, the monasteries of Lhasa have long been important for the Tibetan people, and have seen the rise of the Dalai Lama, and many other changes throughout their long and varied histories. And few monasteries in Tibet have had the honor of cultivating many eminent Gelug monks throughout history, like the famous Sera Monastery in Lhasa.

Located around five kilometers to the north of the Ramoche Temple and Potala Palace in Lhasa, on the outskirts of the city, Sera Monastery lies at the foot of the Serawoze Mountain, at an altitude of around 3,700 meters. Built in 1419, the monastery was the third of the Great Three university monasteries of the Gelug tradition to be built in Lhasa, the first two being Ganden and Drepung Monasteries. 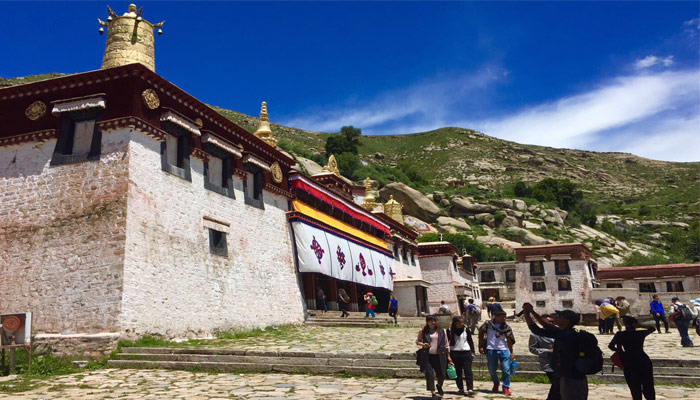 Sera Monastery is one of the Great Three university monasteries of the order in Tibet.

Built in the same year that the founder of the Gelug tradition, Je Tsongkhapa, died, the monastery has been one of the most important teaching monasteries in Tibet for more than 600 years. For tourists, the monastery is open from 9:00am to 6:00pm daily, and is normally part of the first few days of all tours to Tibet that start in Lhasa. Lying just north of the city center, it is best reached by car with your guide and driver, though there are buses that run to Seal Si bus station just a few minutes’ walk from the monastery entrance.

The monastery lies on an area of around 28 acres in the north of Tibet’s capital, Lhasa, and also houses several smaller institutions in the locale around the monastery grounds. Mainly consisting of three main areas, the monastery was built with the main colleges of Sera Me and Ngagpa in the center. The main part of the monastery consists of the Great Assembly Hall, the largest building in the complex. Built in 1710, the structure contains 125 stone pillars and the entrance is lined with ten large columns. Composed of the Hall Square, the famous Sutra Hall, and five of the many Lhakhangs of the monastery, the hall is noted for its huge statue of the Jampa Buddha and the massive wall-length thangka that adorns the interior.

The debating courtyard, behind the Sera je College, is a cobblestone area where the monks of the colleges hold their daily debating lessons. Monastic debates are one of the many ways of teaching and learning the philosophy and theology of Tibetan Buddhism, and are an exciting and enthralling event to watch. Done in pairs, the debates are extravagant and dramatic, with a lot of foot stamping and hand clapping, as well as loud shouts and exclamations.

There are three colleges at the monastery, which are known here as Zhacangs, for the Buddhist learning, as well as 32 dormitory buildings, known as Kamcuns. These are the main areas for most of the monks that live and learn or teach at the monastery, and the many buildings appear densely packed, yet do not feel overly crowded together.

The major highlight of the monastery are the debates held in the Debating Courtyard every day except for Sunday. Monastic debates are a form of discussion and learning that originated in India, where the opposing sides debate the philosophy of Tibetan Buddhism. As one of the most popular features of the Sera Monastery, it is often viewed by many tourists, and is one of the most extravagant and expressive forms of debate in the world. 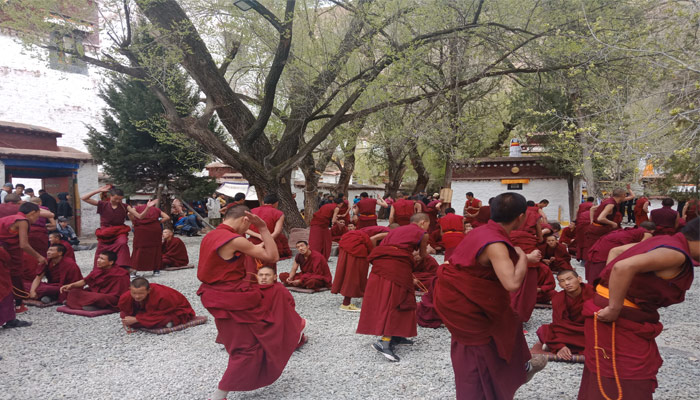 This expressive and expansive form of debating is exclusive to Sera Monastery, and the debating monks use various gestures, such as stamping and hand clapping, to increase the intensity of their position on the debate. In the debate, the questioner has to put forward his point of view on the topics given, and the defender, who is sitting, can answer only yes, no, or unknown, and must respond within a given time. The questioner must try to persuade the other monk that his point of view is overpoweringly correct, and if the point is proven, the defender must accept it and give way.

These enthusiastic debates form a major lesson in learning the philosophy and spirituality of Tibetan Buddhism, and can sometimes be a source of great interest for the high lamas, when a debater comes up with a point of view that is new, yet essentially correct.

The Shoton Festival is one of the most important festivals in the Tibetan Buddhist calendar, and is the time of the Sunning the Buddha ceremony at the Sera Monastery in Lhasa. Held every year in August, the Shoton Festival, or Yogurt Festival, is held to commemorate the end of the 100 days of fasting by the Buddhist monks, who spend the entire time locked away inside the monasteries praying and meditating, as a way to prevent harm to any living creature.

The festival dates back to the mid-17th century, when the monks were required to practice Buddhism only inside the monasteries, and when they finished, the locals would bring yak-milk curds for them to eat and as an offering to thank the monks for their devout sacrifices. Over the centuries, the curds turned into yogurt, and the festival became a major part of the Tibetan way of life.

During the festival at Sera Monastery, a huge Thangka painting is unveiled on the massive stand behind the monastery. Attended by thousands of devout Tibetans, as well as people from mainland China and all over the world, this unveiling is known a “Sunning the Buddha”, and the thangka portrays a huge image of the Jampa or future Buddha.

The Sera Bengqin Festival is another big festival held in the monastery in Lhasa, normally on the 27th day of the 12th month in the Tibetan calendar. The festival has its ancient beginning not long after the monastery was built in the 15th century, and it is said that a Vajra Pestle was introduced to the Gelug tradition from India. The pestle was taken to Sera Monastery, and was enshrined there as an object of worship.

During the Bengqin Festival, the abbot of the monastery would take the pestle to the Potala Palace for the Dalai Lama to bless it, then return it quickly to the monastery, where it would be held up for all to see. It is believed that the pestle would accept all of the prayers and worship of the pilgrims and locals, and pass them on to heaven. The festival at Sera attracts many thousands of Tibetan Buddhists and pilgrims from across the plateau every year.

Sera Monastery is one of the major highlights of any tour of Lhasa, and almost every tour that comes to Tibet includes a visit to Sera Monastery. However, for the best experience of this unique university monastery, our 4-day Lhasa Small Group Tour is the perfect opportunity for you to make the most of a visit to this beautiful and unique monastery. 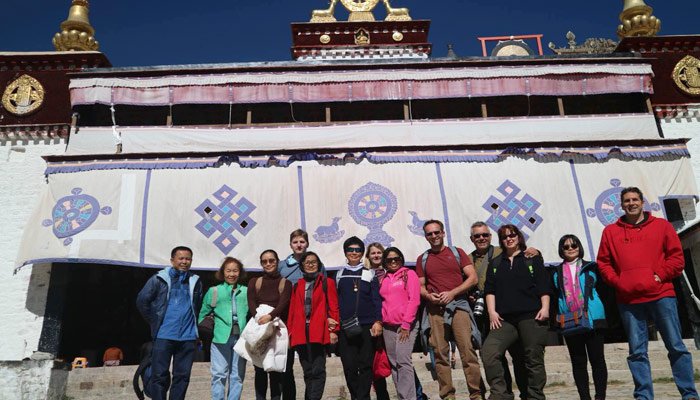 Almost every tour that comes to Tibet includes a visit to Sera Monastery.

The itinerary of the tour is laid out so as to best allow you to make the most of the many major attractions of the city of Lhasa, without having to rush around to see everything this stunning City of Sunshine has to offer. Our professional guides can answer all of your questions on the religion, culture, and local architecture of Tibet, as well as explain more about our local history. Not only do you get to spend the whole afternoon at the Sera Monastery, but you will also be able to visit all of the other attractions, including the Potala Palace, Jokhang Temple, and Drepung Monastery, among others.

For anyone visiting the Sera Monastery, there are a few things to take into consideration, especially in regards to the local culture. The monastery is a working Buddhist monastery, and you should have some respect for the monks and pilgrims, as they are as devout about their religion as you may be about yours.

If you wish to take photos, it is best to have your guide ask first, as taking photos inside some monasteries in prohibited, except for a with a fee. Photos of individuals should also have their permission, as many Tibetans believe the photo captures part of the soul.

Sera Monastery is one of the greatest monasteries ever built in Lhasa, hence being one of the Great Three of the Gelug tradition. It is also an inspirational monastery, and the monastic debates held in the afternoons are something you should not miss. The actions and chants of the debaters is an amazing spectacle, and you do not need to understand Tibetan to know which side is winning. As one of the best parts of a tour of Lhasa, Sera Monastery is definitely a place you will love to come back to.