Of all the ways one can get to Lhasa, the Tibet train is the most exciting and adventurous, traveling thousands of miles overland, through some of the most stunning countryside in both mainland China and Tibet. A journey that covers from 2,000 kilometers to more than 4,000 kilometers, taking train to Lhasa Tibet is an unmissable experience that will leave you with lifetime incomparable memories.

Why Travel to Lhasa Tibet by Train?

1) The train to Lhasa is convenient and cost-effective

Before the trains, there was just the road, and it was a hard drive to get to Lhasa, the provincial capital of Tibet. Flights run from several cities across China to Lhasa Gonggar International Airport, but the expense is rather high, even during the low season.

Since it was opened in 2006, the train to Tibet has carried many millions of passengers to and from Tibet. It is cheaper than the flight, but rather safe and convenient compared to the car ride. It will never be out of reach for many tourists who desired to take a Tibet tour to see the unique people and culture of the plateau region.

It was once claimed that a railway to the high-altitude Tibetan plateau was an impossible task. However, the Qinghai-Tibet Railway was successfully opened for passenger traffic, and began the new era of tourism in Tibet. As the world’s longest and highest plateau railway, the Qinghai Tibet Railway runs for 1,956 kilometers from Xining in Qinghai Province to Lhasa. It carries passengers from across China to the heady heights of the Tibetan plateau. 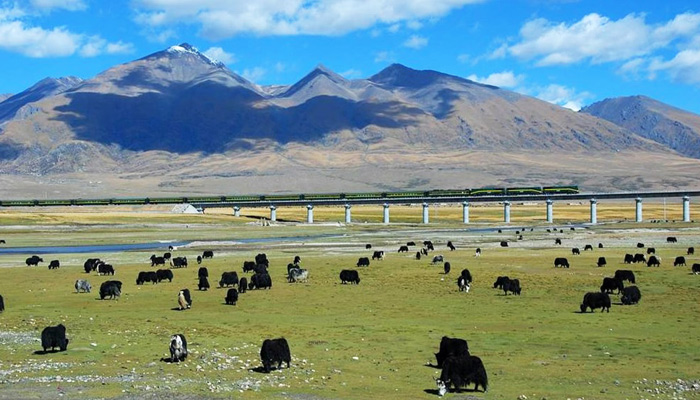 The Tibet train runs through some of Tibet’s most spectacular countryside, across high mountain ranges, and beside shimmering holy lakes and fast-flowing rivers. Passengers will have the chance to see famous and renowned attractions like Qinghai-Lake, Kunlun Mountains, Kekexili Nature Reserve, Tanggula Mountains, Cuona Lake etc. It will not be boring to take the train ride as you have so much unique and unapparelled scenery to appreciate along the way.

3) The Tibet train is well-equipped for comfortable experience

The trains to Tibet are quality-made modern carriages that contain three main types of passenger compartments for three classes of tickets. The third-class ticket is for a padded seat in the “hard seat” compartments of the train, and which is the cheapest option for travel. However, it is not recommended for traveling to Tibet, since it can get very uncomfortable after the first several hours, and the trains take a minimum of 22 hours to get to Lhasa.

The second-class compartment is known as the “Hard Sleeper cabin”, and despite the name, is definitely not hard. The beds are soft and comfortable, albeit a little crowded. The hard sleeper carriages have six berths per cabin over three levels, and are a little cramped, with almost no privacy except for a light curtain between the berths and the corridor. This is the cheapest option for comfortable travel, and if you are not worried by a little overcrowding, it is ideal for getting to Lhasa on a budget. 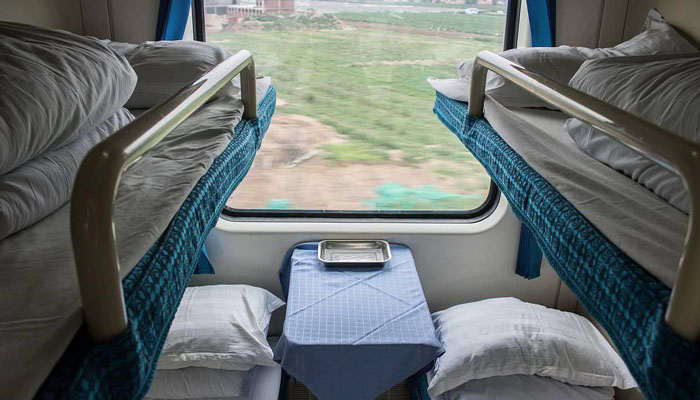 The first-class compartments, known as the “Soft Sleeper cabins”, are a little more comfortable than the hard sleepers, with only four berths per cabin, and a lockable door to the corridor outside. With more room to move around and store your luggage, the soft sleepers are often the preferred travel compartments of foreign tourists to Tibet, although they are the most costly of all.

Besides, all the carriages have Chinese and Western style toilet facilities, washing facilities, and boiling water on tap, although there is no shower room as showering on the train at the increased altitudes is not advisable. An oxygen supply system is built into the train, and releases oxygen into the air once the train passes Golmud and gets higher on the plateau.

For dining, the trains all have a restaurant car, with freshly cooked meals available, and a wide-ranging selection of Chinese and Tibetan foods, with a few western favorites to fill in the gaps. Food service trolleys also run the length of the train, selling snacks and packet meals to passengers, and providing box meals from the dining car for those that do not want to eat in the restaurant.

Large windows in the cabins and corridor sides of the train allow an expansive view of the landscape the train travels through, giving passengers amazing views of the stunning Tibetan scenery and the high snow-capped mountains. And if that is not enough, the staff of the train will point out the most famous and popular sights in English, Chinese, and Tibetan as you approach them, so you will not miss out on the spectacular sights.

The trains to Lhasa leave from seven different gateway cities across China, and travel various routes to reach Tibet, although all trains pass through Xining Railway Station and along the Qinghai Tibet Railway. The seven gateway cities are Beijing, Shanghai, Guangzhou, Chongqing, Lanzhou, Chengdu, and Xining.

From Lanzhou, the route goes straight to Xining, while from Beijing, Chongqing, and Chengdu, the routes all head from different directions to Lanzhou, and then on to Xining, the next station on the route. Trains from Shanghai and Guangzhou both head through Xi’an, Zhongwei, and Lanzhou before reaching Xining and the start of the Qinghai Tibet Railway.

The Tibet train from Beijing to Lhasa departs every day at 20:00, and runs for around 40 hours before reach the plateau. It will pass several northern provinces before reach Xining, to start the real ride on the Qinghai-Tibet Railway. It is on the noon time when the train arrives in Lhasa Railway Station on the third day. 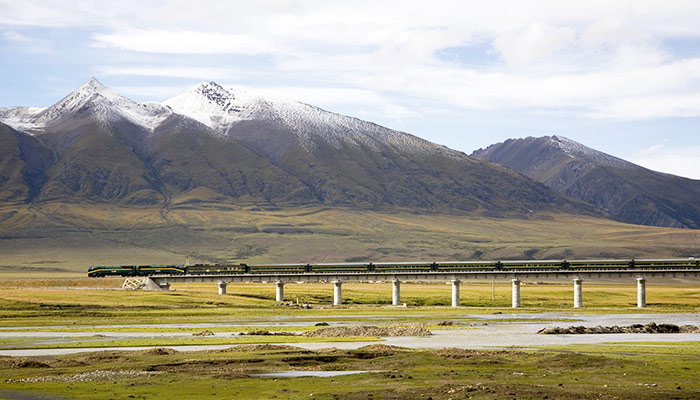 The train from Shanghai to Lhasa leaves once every day, at 20:08 from Shanghai Railway Station and will arrive in Lhasa at 19:35. The train runs across 8 provinces, and passes major cities as Suzhou, Nanjing, Zhengzhou, Xi’an etc., before reach Xining and then continues to move towards Lhasa.

The train from Guangzhou to Lhasa departs every day, and will run for the longest time (over 52 hours) for the whole ride. From 11:52 on the first day to 16:45 on the third day, the train will pass Changsha, Zhengzhou, Xi’an, Lanzhou, and then Xining, Golmud, and finally Lhasa.

From Chengdu, the train to Lhasa departs every other day at 21:37, and arrives in Lhasa on the third day. It takes about 36 hours to cover a distance of 3360 km. The train from Chengdu to Lhasa will run across two cities before reach Xining.

All trains to Lhasa from mainland China will stop at Xining Station, making it offer the most frequent trains towards the plateau. On the other hand, there are also trains originated from Xining, departing every day. The train from Xining to Lhasa takes around 22 hours and will pass Delingha, Golmud, Amdo, Nagchu, Damxung, and finally reach Lhasa. Passenger can first take a flight to Xining and then enjoy the train to Lhasa, to cut down the long train ride, if you are from Shanghai, Beijing, or other distant cities.

Can I Take a Train to Lhasa from Kathmandu?

Currently, there is no train available from Kathmandu to Lhasa. The China-Nepal Railway is in the plan, and part of the railway has been completed. Tourists can take a flight to Lhasa from Kathmandu, or travel overland across Gyirong Port. The flight takes about 1 hours and a half, while the overland drive will be a journey of around seven days to cover the highlighted sites along the route.

Travel Tips for Taking a Train to Lhasa

1) Get the Tibet Travel Permit before you go

If you are taking the train to Lhasa, it is important to remember that your Tibet Travel Permit is the most important document you will need. You cannot get onto the platform for the train to Tibet without it, nor can you board the train, or get through the checks at the other end if you lose it. Keep it safe at all times, as it will also be needed for hotel check-in and police checkpoints across Tibet.

2) Book your train ticket to Lhasa in advance

Tibet train tickets can often sell out pretty fast, so it is advisable to book your train tickets in advance, as soon as the ticket offices open for the required date. It is normally 60 days before the date of travel that tickets become available, so make sure you book them fast, especially in the summer months when the train is busiest. If you really can’t get the train ticket to Lhasa, you can take a return train from Lhasa to mainland China after your Lhasa city tour. You can also see most of the best parts of the Qinghai-Tibet railway during the daytime.

3) Take your own food when board the train

If you are not sure about the food on the train, or it is your first time in China and Tibet, it is a good idea to bring pot noodles and packet foods with you. There is boiling water for free on the train, and it can be used for packet and pot meals or tea and coffee. If you have never had local Chinese or Tibetan tea, you might want to bring your own, as it is very different from western teas, most of which use Indian tea leaves.

It is popular among tourists to travel to Lhasa by train. The trains to Lhasa depart from several cities across China, and will give tourists a wonderful journey along the famous Qinghai-Tibet Railway. As a reminder, it is recommended to book the soft-sleeper ticket for the train ride, to enjoy a more comfortable experience. And Tibet Travel Permit is required to board the train to Lhasa.

Be the First One to Comment "Train to Lhasa: Never Miss the Tibet Train Experience"