What is the Most Classic Mount Kailash Tour Itinerary?

Traveling to Mount Kailash in the far west of the Tibet Autonomous Region is one of the most exciting and adventurous tours on the plateau. Located in Ngari Prefecture in northwestern Tibet, Mount Kailash is a sacred site in four religions, and is deemed to be the most sacred mountain in the world. Thousands of people travel to the mountain every year to trek around the sacred kora route, following in the footsteps of pilgrims that have taken this ritual and spiritual journey for thousands of years.

While there are many tours and treks in Tibet, none come close to the awesome journey that takes you to one of the most holy of religious sites in Tibet, and includes the lake where it is said Buddha was conceived. And if you are thinking of planning a trip to Mount Kailash and Lake Manasarovar, then there is no better tour to choose than our 15-day Lhasa to Mount Kailash Tour.

Why Choose the Itinerary from Lhasa to Mount Kailash?

There are many reasons one should consider this tour, not the least of which is for the benefits to your health. Kailash lies at an altitude of 6,636 meters above sea level, and the hike around the mountain reaches heights of more than 5,300 meters. Even the starting point of the trek, at Darchen at the southern foot of the mountain, sits at an altitude of 4,575 meters, almost a thousand meters higher than Lhasa. Starting in Lhasa gives you the chance to properly acclimatize to the increase in altitude of the plateau before heading off to Kailash for the trek. 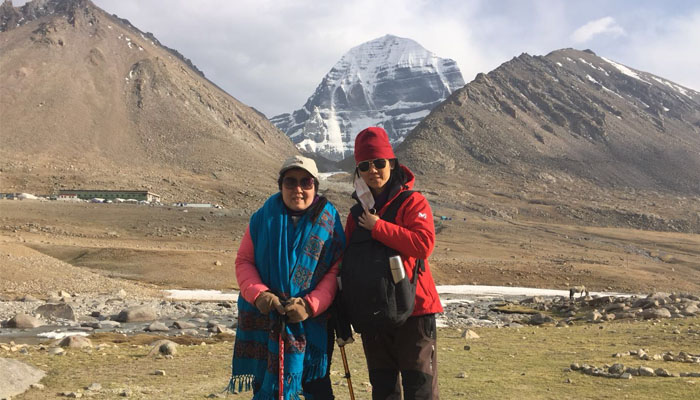 Before hike around the Mount Kailash, one can get adpated to the ascending altitude from Lhasa.

The road condition from Lhasa to Darchen is good, with a well-paved road for the entire distance, and the transport to get there is comfortable and warm (a valuable asset in the colder months). It can take several days to reach the mountain, but the trip to get there also takes you through some of the most amazing scenery and landscapes in Tibet, as well as giving you the opportunity to visit several other amazing attractions along the way, including the famous Everest Base Camp.

The itinerary for the trip to Mount Kailash and Lake Manasarovar is one of the most spectacular of any tour in Tibet, and covers a great many of the stunning attractions of the region, including ancient monasteries, one-of-a-kind stupas, beautiful river valleys, spectacular plateau lakes, and more delightful sights than you would have thought possible in just two weeks.

1. Spend the First Days in Lhasa

On your arrival in Lhasa, you will get to see a little of the city, and get your first impression of the region and its people. After a good night of rest - which should help with your acclimatization to the high altitude - your tour starts properly on day two. The day is spent taking in the rich and wonderful sights of the Potala Palace, Jokhang Temple, and the ever amazing Barkhor Street. The pilgrim’s circuit around Jokhang Temple, the street is also full of shops selling a variety of items for tourists and locals alike. 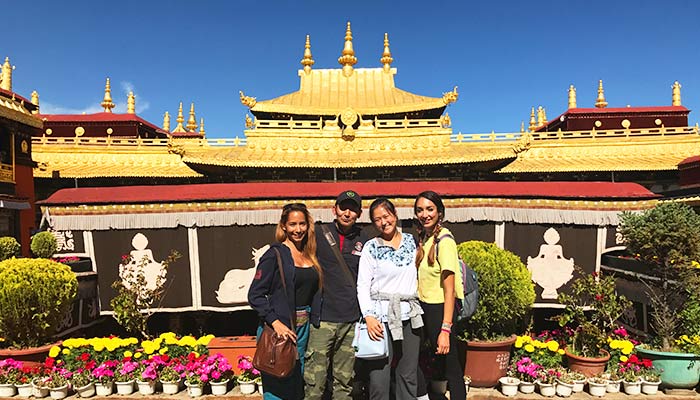 Visit Jokhang Temple in your first days in Lhasa

The third day sees you taking a trip to the outskirts of Lhasa city to visit the monasteries of Drepung and Sera. At Sera Monastery, you can watch the intense philosophical debates of the Sera monks. Similarly, Drepung is just as spiritual, being the most important monastery of the Gelugpa sect of Tibetan Buddhism and the original seat of the Dalai Lama.

2. Then Travel to Shigatse

Day four takes you on a road trip from Lhasa to Shigatse, stopping at Gyantse, once the largest town or city in Tibet. Gyantse is the site of a former British military garrison that helped to train Tibetan officers in the first half of the 20th century. On the route you will visit Lake Yamdrok, one of the three holy lakes of Tibet, and the largest freshwater lake in the region. On the north-western edge of Gyantse stands Pelkor monastery, with its amazing 32-meter Kumbum Stupa close by. 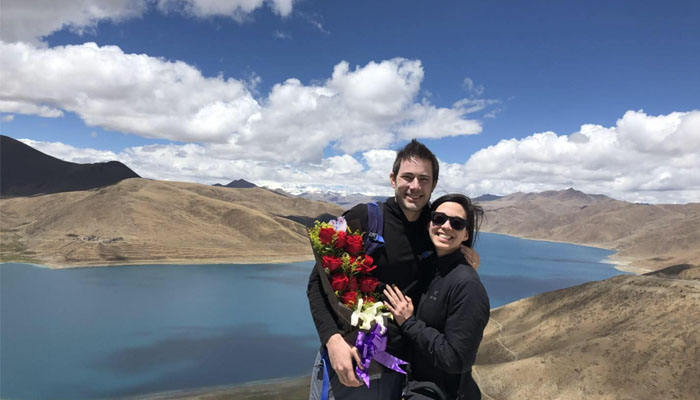 You will visit the beautiful Lake Yamdrok en route from Lhasa to Mount Kailash.

After arriving in Shigatse, you will travel to the famous Tashilhunpo monastery, the seat of the Panchen Lama, Tibet’s second highest religious leader. Then it is on to Sakya monastery, which is the seat of the Sakya school of Tibetan Buddhism. From there you finish the fifth day on the plateau with a visit to Tingri town, the entrance to the Himalayan Nature Reserve and Everest Base Camp. The route goes through the Gyatso-la pass, a high mountain pass that sits at 5,200 meters above sea level. Tingri is the site of an old Gelug monastery that was destroyed, but is now being rebuilt, and is well known for its spectacular views of Mt. Everest.

On day six you will travel to Rongbuk monastery, in preparation for the trip to Everest Base Camp (EBC). Rongbuk was founded in 1902 by the Nyingmapa Lama on the site of several meditation huts and caves. The caves can still be seen in the cliffs and down the valley. It was the Rongbuk Lama who gave the young boy, Namgyal Wangdi, the name Ngawang Tenzin Norbu, who later became known as Tenzing Norgay, the Sherpa guide of Edmund Hilary, the first man to scale Everest. The view of the majestic Mount Everest from the monastery, on clear days, is absolutely breathtaking. 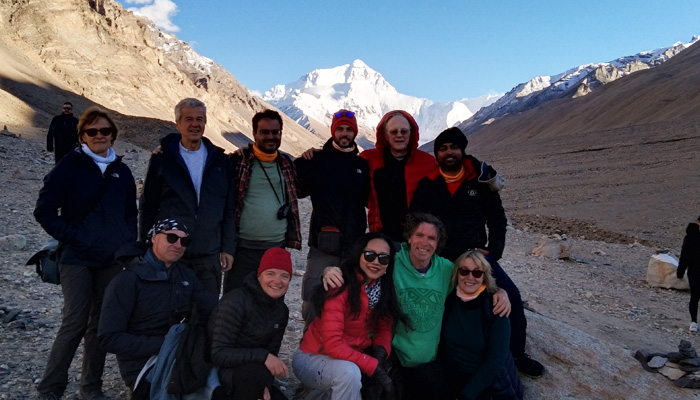 Everest Base Camp Visit during Lhasa to Mount Kailash Tour

On day seven you will get to experience what only travelers to Tibet and mountaineers have: Everest Base Camp. While this is the “official” tourist base camp, being as far as tourists are allowed to go, the actual base camp for climbers is at the foot of the Rongbuk Glacier. After the visit to EBC, you will drive to Saga, a small town on the road towards Darchen, for a good night’s rest, essential after the visit to the dizzy heights of Everest.

On the eighth day you will travel from Saga to Darchen, stopping for a while to visit the freshwater Lake Manasarovar on the way. A holy lake in Tibetan Buddhism, it is one of the most sacred lakes of Tibet, sitting 4,590 meters above sea level. You will have time to relax on the shore and take in the vista of the Transhimalaya, with Mt. Kailash rising high in the Gangdise Mountains to the north. After you have experienced this wonder of natural beauty, you will continue on to Darchen, at the foot of the sacred Mt. Kailash.

The next three days will be spent trekking around the holy mountain, following the kora (circumambulation) of the pilgrims around its base. After a 40-minute bus ride, you will reach Sarshung village, and the start of the trek. The trek is quite a tough one, and is rated as being the hardest kora in Tibet, so stout walking boots are needed here. The entire route is 52km long, and the first day sees you reaching Drirapuk monastery after around four hours. The monastery has tent guest houses, where you will stay overnight. 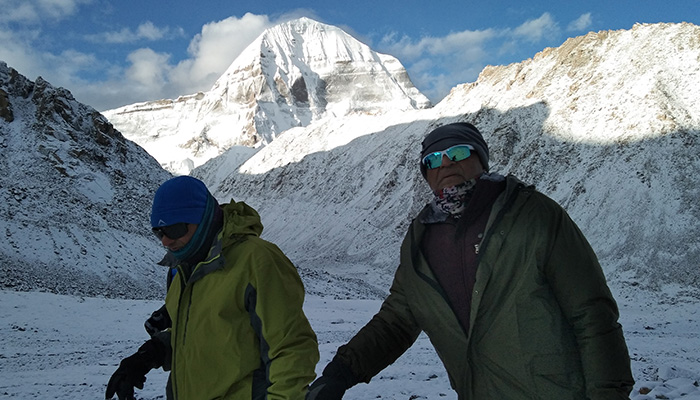 Trekking around the holy Mount Kailash

The following morning the trek continues along the hardest part of the route; Dolma-la pass, which stands only 6.4km from the day’s start, but more than 760 meters higher than the monastery. At 5,630 meters above sea level, it is the highest pass in the world. After a short break to rest and take in the astounding view from the pass, it is then on to the Lha Chu Valley floor, an hour’s walk downhill. Once down in the valley it is another four hours of trekking to the Dzultripuk monastery. Your guide will keep you on the right-hand side of the river, as the walk is smoother there. Dzultripuk also has tent guest houses for your overnight stay, and you will have time in the latter part of the day to wander around the monastery and grounds.

The final day of the three-day Mt. Kailash trek takes you back to Darchen, which is a relatively easy walk compared to the rest of the kora. You start with a visit to the many temples and shrines nearby, and the cave site where 11th century Tibetan philosopher, Milarepa, spent many years of his life. After around three hours of easy walking, you will be met by the driver to take you back to Darchen in comfort, for a well-earned rest in a comfortable bed and a shower.

The return trip to Lhasa takes three days of driving, and follows almost the same route back. This is a great time for contemplation and to view the stunning scenery around you as you travel. Your guide and driver will make stops on the way, for rest, food and to view the sights more. The first night will be spent at Saga, and then at Shigatse on the second night, before reaching Lhasa in the early afternoon of the third day. This will give you some time to wander around the city for a lasting remembrance of Tibet, before your driver and guide take you to the train or your flight the next day. Barkhor Street is also a great place to buy some last minute gifts for friends and family.

The 15 day tour of Mt Kailash and Lake Manasarovar is one of the best tours in Tibet, visiting one of the holiest regions of the Qinghai-Tibet Plateau. The best times to visit are in May and June, or September and October, when the weather is milder and not too cold. Perfect for the trekking around Mt. Kailash and the views of Everest’s magnificent peak.

Be the First One to Comment "What is the Most Classic Mount Kailash Tour Itinerary?"