In Tibet, festivals abound, and here are festivals in every month of the year in the Tibetan calendar, usually more than just one. However, for most Tibetan Buddhists, there is one festival that is more important than all the rest, with the exception of the Tibetan New year or Losar Festival. Saga Dawa, the festival of the Fourth Month, is celebrated across the Tibetan areas of China, from the farthest western areas of Ngari to the easternmost parts of Sichuan’s Tibetan areas. A unique festival of celebration, the Saga Dawa Festival is one of the Four Major Festivals of the Tibetan calendar. Important for both Buddhists and Hindus alike, the festival is celebrated massively in Tibet in major locations, even seeing Indian pilgrims traveling to the plateau for some of the ceremonies.

An important time for Buddhists and Hindus, the festival celebrates the birth, enlightenment, and death of Buddha Sakyamuni, who attained Buddhahood at the age of just 35. On his death, Buddha instructed his followers to follow his teachings to honor and celebrate his Parinirvana to Heaven, instead of mourning his death.

The month of Saga Dawa is an auspicious time in Tibet, and is a time for meritorious acts, many of which include pilgrimage journeys to the sacred sites of the plateau region. The 15th day of the month is the full moon, and is known as the Saga Dawa Düchen, the actual day of the birth, Nirvana, and Parinirvana of Buddha. 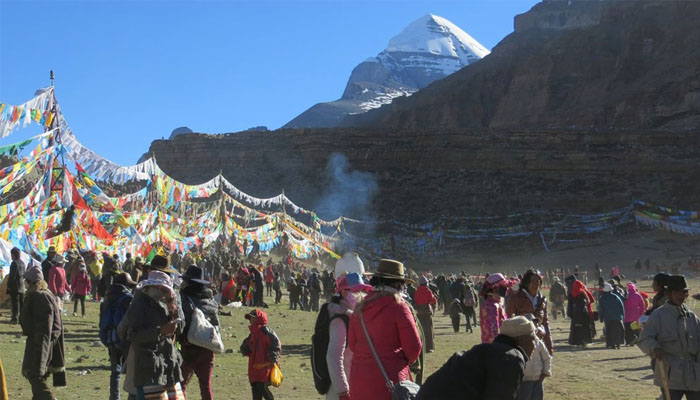 In Ngari, Saga Dawa Festival is done around the foot of Mount Kailash.

While the festival is celebrated all across Tibet, there are huge festivals in both Lhasa and Ngari. In Lhasa, the festival centers around the sacred Jokhang Temple, while in Ngari, it is done around the foot of Mount Kailash, the most sacred mountain in the world. Held in reverence by Hindus, Buddhists, Jains, and Bonpo, the mountain is believed to be the earthly representation of Mount Meru, the legendary home of the gods and center of the universe.

The Saga Dawa Festival at Mount Kailash is the most auspicious of all the sites where the celebrations happen, mainly because of the location at the foot of Mount Kailash. Celebrated for an entire month, positive and negative acts performed in the fourth month are multiplied 100,000 times, so it is a good time for Hindus and Buddhists to perform the ritual kora pilgrimage around Mount Kailash. As the most auspicious time of the year, Tibetans travel to sacred pilgrimage sites to perform the ritual kora and pray to the gods.

Known as Gang Rinpoche in Tibetan, Mount Kailash is one of the most sacred sites in Tibet, and to perform the kora around Mount Kailash in the fourth month is to multiply the merits of completing the circumambulation massively. While there are a number of ceremonies held and performed at the foot of this pyramid-like mountain, none is more important than the kora pilgrimage.

What to See during Saga Dawa Festival at Mount Kailash?

At the time of the ceremonies, which are held at the mountain on the 15th day of the fourth month, thousands of Buddhists and Hindus travel to the mountain in the desolate area of Ngari Prefecture in the far west of Tibet. And the sights at the location at the foot of the mountain, around the flagpole at Tarboche, are some of the most amazing and extraordinary you can imagine.

The main sights of the celebrations in Tarboche are the religious ritual ceremonies and the setting of the famous flagpole of Tarboche, the most important flagpole in Tibet. After the initial Buddhist rituals, ceremonies, and religious chanting of the Buddhist sutras, the people begin to walk around the flagpole, carrying incense and burning juniper branches. Then the flagpole is take down, and all the old prayer flags from the previous year are removed. 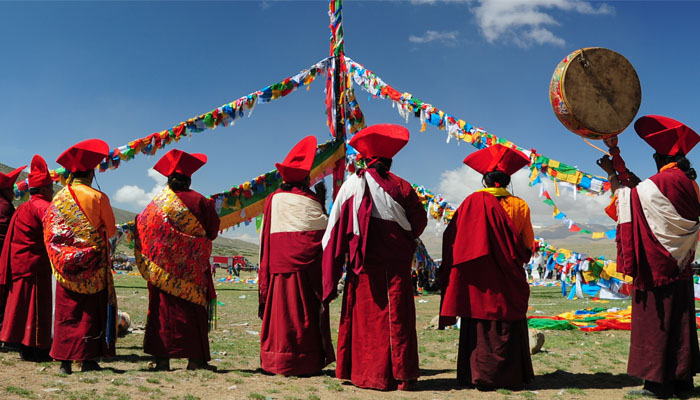 The flagpole will be erected perfectly upright during Saga Dawa Festival.

Standing 25 meters tall, this unique flagpole must be erected perfectly upright, and it is believed that, should the flagpole at Tarboche ever be set at any angle less than perpendicular, then tradition says that Tibet will be in trouble. A dedicated Buddhist lama is the one to set the pole, and years of experience and practice have made him an expert in making sure it is upright.

While the ceremony of the flagpole proceeds, monks and lamas chant the Buddhist scriptures and blow the huge trumpets of the plateau as they continue their ritual walk around the flagpole. In Tibetan Buddhism, it is believed that to complete 13 circuits of the flagpole at this time is equal to one circumambulation of the Kailash kora, and it takes just a few hours to complete rather than a whole day of strenuous hiking.

Thousands of people join the procession of monks walking around the flagpole, many of them throwing colored pieces of paper with Buddhist scriptures written on them into the air, to be blown by the winds from Mount Meru to the four corners of the earth.

However, while these ceremonies and rituals are important for the perfect Saga Dawa Festival at Mount Kailash, the most important aspect of the day for many is taking on the ritual kora or Parikrama around the sacred mountain. A trek of 52 kilometers, which is done by tourists as a trek in three days, many pilgrims complete a circuit in just one day, while others perform prostrations every few feet, taking more than a month to complete just one circumambulation.

When to Go for Kailash Saga Dawa Festival in 2021?

In 2021, the festival will be held on May 26, which is the fifteenth day of the fourth month in the Tibetan lunisolar calendar.

How to Enjoy a Kailash Saga Dawa Festival Tour?

Getting to Mount Kailash

Getting to Mount Kailash from Lhasa for the Saga Dawa Festival requires tourists to be on a pre-booked and pre-arranged tour of the region with a registered Tibetan travel agency. However, this is an important and popular time of year in Tibet, for both Buddhists and tourists, and you will need to book early to be assured of a place on a tour to Mount Kailash for the festival.

Tours depart from Lhasa, the Tibetan capital, and travel overland for 1,577 kilometers to reach the sacred mountain, passing through many Tibetan town and cities along the way and stopping at many of the most popular sights and attractions of the plateau.

Part of the whole tour experience at Mount Kailash is the astounding Kailash Kora trek. Notably the hardest trekking route in Tibet for international tourists, this 52-kilometer kora route takes you all the way around the mountain, starting and finishing in the small village of Darchen, at the foot of the southern slopes of Kailash.

The trek takes three days for most tourists, due to the higher altitude being a bar to completing it in just one day, as many Tibetan Buddhists do. Even the Hindu pilgrims take several days to complete the trek, and many of them ride on ponies, though they will share the merits with the pony. 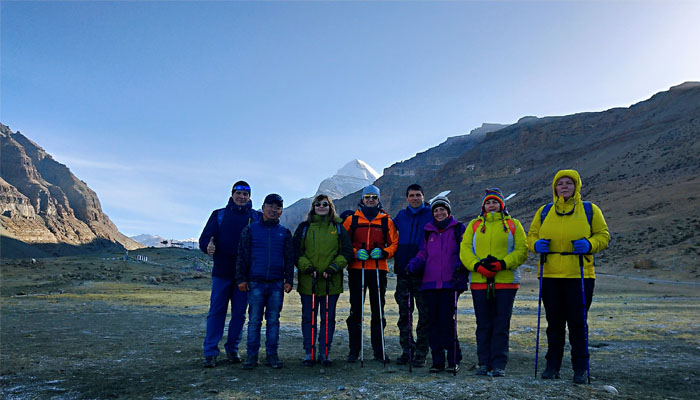 An outstanding trekking experience at extreme altitudes, the trek takes you past three of the five monasteries around the mountain, stopping for the night at two of them, and brings you to one of the highest mountain passes in Tibet the Dolma La Pass at an altitude of 5,630 meters above sea level. While the first and third days of the trek are relatively moderate, the second day is the hardest of all, taking the steep climb up to the high pass and down the other side. Much of the route is rocky and uneven, and the high altitude means more rest stops and a longer time to trek.

However, this is rated as one of the most amazing and spiritual experiences in Tibetan trekking, and the mountain sees hundreds of tourists from all around the world coming to take on this challenging hike around the world’s most sacred mountain.

Book a Mount Kailash Tour with us

If you are planning a tour to Mount Kailash for the Kora trek, then we have the perfect itinerary for you. A 15-day tour that starts in Lhasa, and takes you all the way across the plateau to the distant mountain in the Gangdise Range of the Transhimalaya, this is the best tour in Tibet. The tour starts in Lhasa, and allows you to acclimatize for a few days while you visit the amazing sights of the Potala Palace, Jokhang Temple, and Sera and Drepung Monasteries, before taking you out on the road.

After leaving Lhasa, you will head through Gyantse, the home of the Kumbum Stupa and the famous Pelkor Chode Monastery, to Shigatse, the second city of Tibet. There you will visit the seat of the Panchen Lama, Tibet’s second highest religious incarnation, at the Tashilhunpo Monastery, before heading off to visit the world’s highest mountain, Mount Everest. Known in Tibetan as Chomolungma, the base camp is located to the north of the summit at 5,200 meters and has the best views of the peak from anywhere else.

After leaving EBC, you will pass through Saga and reach Lake Manasarovar, the sacred lake that lies a short distance to the south of Mount Kailash. From there, you will travel the last 30km to Darchen, where you will be able to experience the festival and take part in the 3-day trek around the mountain.

The Saga Dawa Festival is one of the most important festivals in Tibet, and for many Tibetans, it is the most important time of the year for their devout religious beliefs. Performing the ritual kora is an important event on their journey towards enlightenment, and in Tibet, it is important to travel to the Saga Dawa Festival for the ritual kora at least once in your lifetime. For tourists, this is an once-in-a-lifetime opportunity to see the amazing experience of Tibetan Buddhism at its most devout and revered. No other festival in Tibet can instill such a feeling of spirituality in someone who is not even Buddhist.