One of the most popular tours in Tibet to spend on the plateau is the trip from Lhasa, the Tibetan capital, to Mount Kailash, the world’s most sacred mountain. Mount Kailash, known in Tibetan as Gang Rinpoche, may not be a high mountain by Himalayan standards, but is rated in four religions as the most sacred mountain on the planet. Believed to be the earthly representation of the legendary Mount Meru, the center of the Universe, Mount Kailash is one of the few mountains in the world that has never been climbed, and thanks to policy in China, this sacred mountain will never feel the fall of mortal feet. While there may be different travel routes to the mountain, getting to Mount Kailash from Lhasa can only be done by booking yourself onto a pre-arranged tour of Tibet with a registered Tibet tour operator or travel agency.

Located in the far west of Tibet in the Ngari Prefecture, Mount Kailash is the highest mountain in the Gangdise Range of the Transhimalaya. Lying fairly close to the Chinese border with India, Mount Kailash sits to the north of the main road from Lhasa to Xinjiang, and directly opposite the sacred lake Manasarovar, one of the Great Three Sacred lakes of Tibet.

From Lhasa, the road distance to Darchen, the closest village to Mount Kailash is around 1,309 kilometers, not including the distance for the side trip to Mount Everest. In a direct line, Darchen is around 957 kilometers from Lhasa, but unfortunately, there is no direct flight to the area of Mount Kailash. However, it is possible to fly to Gunsa Airport in Shiquanhe in Ngari Prefecture, and then drive south to the mountain. Most people tend to travel overland to Mount Kailash, though, as the long journey by road includes visits to Mount Everest Base Camp and other popular attractions along the way.

If you are traveling overland to Mount Kailash, then you have two options for overland journeys. You can either take the more popular southern route, which stops at EBC along the way, or the less popular northern route that heads first to Lake Namtso and then across Nagqu and northwest Ngari to reach Darchen from the other direction.

1) South Route via Everest Base Camp

The road of the southern route to Mount Kailash is long and arduous, but is well worth the 15-day trip to make it to the sacred mountain for the famous kora trek around Mount Kailash. The route starts in Lhasa, the Tibetan capital, and follows several different roads through the various towns and cities and other attractions to reach the mountain. After departing from Lhasa, the route takes the G318 Friendship Highway through Quxu, turning off onto the S307 to run past the stunning Lake Yamdrok. One of the most sacred lakes in Tibet, this widely spread out lake is believed to be the life-blood of Tibet. 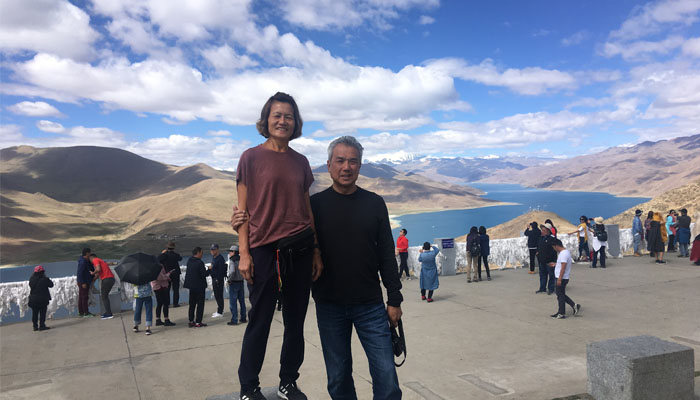 After departing from the lake shore, the road takes you on to the town of Gyantse, once the largest town in Tibet and the location of the Pelkor Chode Monastery and the famous Gyantse Kumbum. A fascinating stupa that stands 32 meters tall and is the only one of its kind in Tibet, the Kumbum lies inside the Pelkor Chode Monastery, the only monastery in Tibet to house three different schools of Tibetan Buddhism. 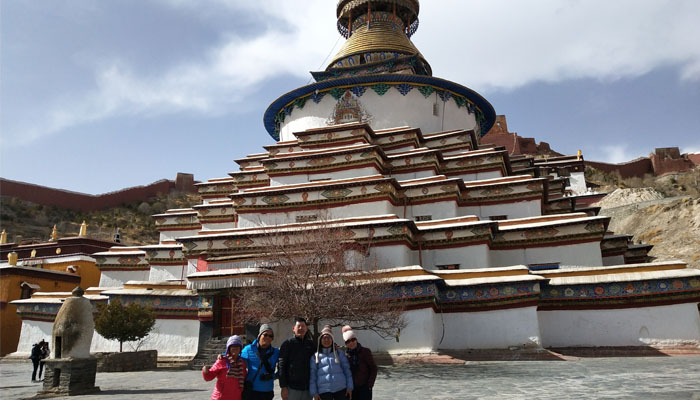 See giant Gyantse Kumbum on the way to Mount Kailash from Lhasa.

After departing from Gyantse, the road continues on to Shigatse, the first stop on the tours to Mount Kailash from Lhasa. The following day, after a visit to the Tashilhunpo Monastery, the home and seat of the Panchen Lama, the tour continues along the G318 once more, heading to Tingri, a small town on the Friendship Highway in Shigatse Prefecture. At Old Tingri, after a stop for the night, the route turns south off the G318 once more, to take the Zhufeng Road to the famous Everest Base Camp and the Rongbuk Monastery. 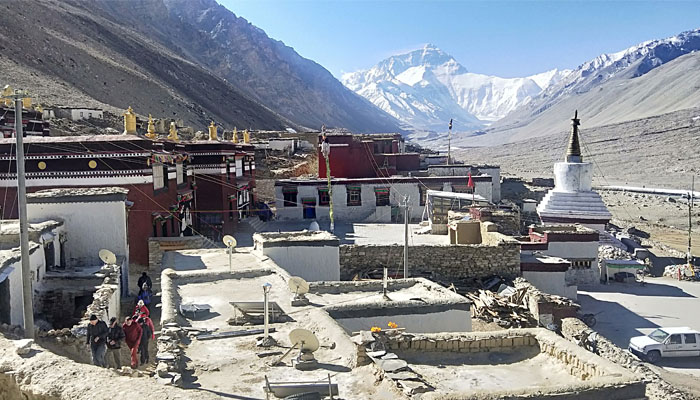 At Rongbuk, the “official” highest Buddhist monastery in the world, you get some of the best views of Mount Everest around 12 kilometers away, and will be able to spend time at the new tourist base camp, which is closer to the mountain. After taking all your photos of Mount Everest from as many angles as possible, and a night’s stay at ether the Rongbuk Monastery Guesthouse or the tent guesthouses at EBC itself, it is time to hit the road again. The route takes you back to the G318 along the same route in, and then turns west to continue along the Friendship Highway to Nyalam County, where the route turns more west and northwest along the S214 Provincial Highway.

The next stop is normally in Saga, the small town in Saga County in Shigatse Prefecture just north of the famous Peiku Tso, a stunning lake that lies close to the road in Gyirong County. At 4,591 meters, Peiku Tso is one of the higher lakes on the plateau, and is known as the Emerald Lake for its turquoise-green waters. After leaving Saga, the road continues along the S214, passing through the town of Paryang in Zhongba County and following the route of the Yarlung Tsangpo River for a stretch. Passing by the beautiful Kunggyu Tso Lake in the midst of the Paryang Desert in Ngari, the road continues northwest before finally passing by the north of the stunning Lake Manasarovar and turning in to the small village of Darchen.

All told, the route to Darchen from Lhasa, including the stops for the many attractions along the route, takes around five days of driving, and to make this trip, including the trek around the sacred Mount Kailash kora and then back to Lhasa, you will need at least 15 days.

The north route to Darchen in Ngari Prefecture takes a very roundabout route to get to the sacred mountain, traveling first north to Lake Namtso and then across the northern prefecture of Nagqu to enter Ngari and reach Darchen from the north.

The route starts from Lhasa, and flows the route of the Qinghai Tibet Highway all the way to Damxung Town, in Damxung County of Lhasa. From Damxung, the route then takes the small local road across the Nyenchen Tanglha Mountains to Lake Namtso, another of the sacred lakes of Tibet. Known as the Heavenly Lake, Lake Namtso lies 112 kilometers from Lhasa and is the largest lake in the Tibet Autonomous Region (TAR). 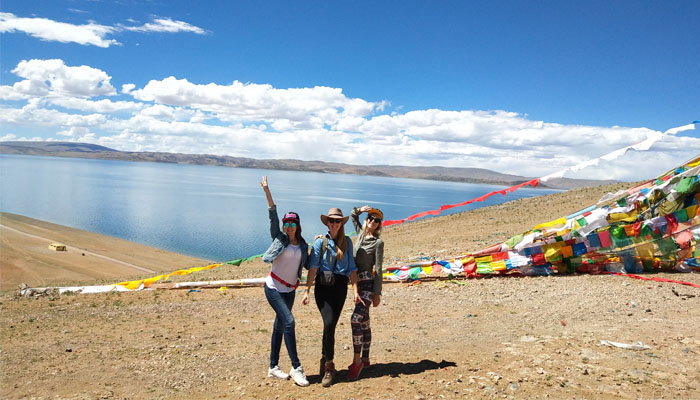 After stopping to explore the lakeside and stay overnight to view the stars, the route continues on across the provincial boundary and into Nagqu Prefecture, heading northwest on the S301 to the small town of Baingoin, just across the boundary in Nagqu. After stopping the night, the route then heads west along the S604 to reach Nyima County, the westernmost county of Nagqu. Crossing the vast area of Nagqu prefecture means crossing the vast Changtang grasslands, home to Tibetan antelopes, wild yaks and kiangs, and many other local wild animals. 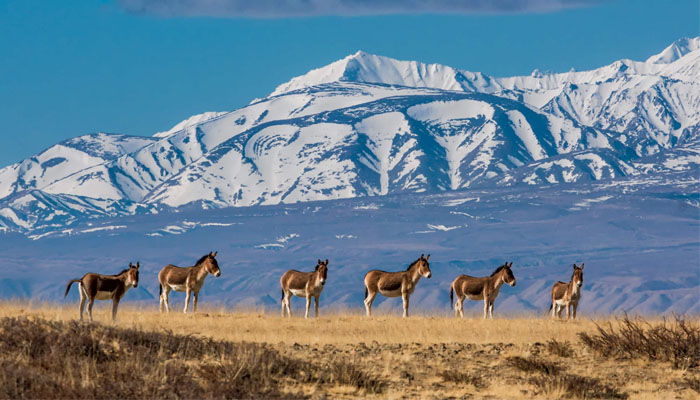 One can expect to see rare Tibetan antelopes while travel along the northern route to Mount Kailash.

After Nyima, the road heads west again, passing through the villages of North Wenbu and South Wenbu, taking several small local roads to reach the town of Coqen, for another stop. After Coqen, the route follows the S206 for a while, before turning onto smaller roads once again to pass by the beautiful Ngang Lha Ring Tso Lake, one of the most beautiful small lakes in Zhongba County of Shigatse.

The road passes through an area where there are hundreds of small lakes, as well as several areas of swamps that lie between the lakes. Taking the small local roads, the route heads through Ringtor and Yagra, finally passing through Hor Qu near the northern shores of Lake Manasarovar to reach Darchen.

Most travelers heading for Mount Kailash do tend to use the southern route, for a number of reasons. Not only is the route much shorter and much faster, with the northern route taking around eight days to travel, it is also much more well-paved for the entire route. The Friendship Highway from Lhasa to Nyalam is the best road in Tibet, and is a well-covered asphalt highway for its entire length. Even the road from Tingri to EBC is now well paved. After Nyalam, the road is mostly asphalted, with only small stretches of gravel road, and after you pass Saga, the road is fully asphalted all the way to Darchen. 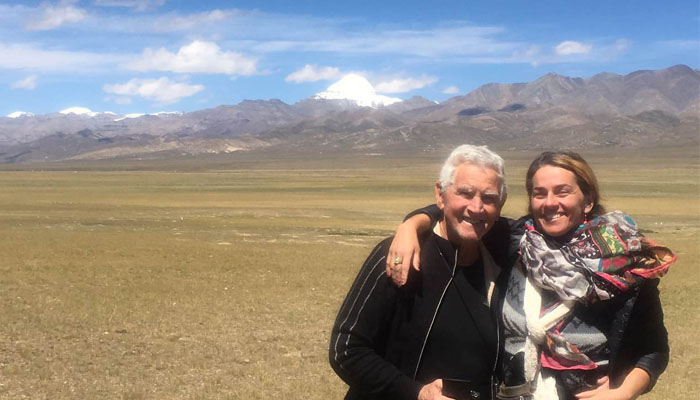 The southern route to Mount Kailash is much more well-paved.

In contrast, the roads of the northern route to Mount Kailash are very different. As far as Lake Namtso, the road is good asphalt, but from there is varies depending on the type of road you are traveling along. From Namtso to Baingoin, the road is wholly gravel, and through the Wenbu Villages to Coqen, it is gravel and dirt surfaces, with many pot holes and bumps. In fact, the road is either gravel or dirt from here all the way to Hor Qu, where you join the main road from Saga, which is asphalted for the last short distance of the route.

If you are planning a trip to Mount Kailash, then the southern route is the best option, unless you like long road trips on bumpy, uneven, and damaged dirt and gravel roads.

For those that want to fly to Mount Kailash, the nearest airport to the mountain lies in Gunsa Village, just outside Shiquanhe Township, the seat of Ngari Prefecture which is located close to the confluence of the Sengge Zangbo River and the Gar River. Darchen, the starting point for the Mount Kailash Kora trek is only a single day’s bus ride from the airport, which makes it an ideal way to get to the sacred mountain without the need for a long journey. A direct flight from Lhasa covers a total distance of around 1,090.24 kilometers.

Known as the Ngari Gunsa Airport, at an altitude of 4,274 meters it is the fourth highest airport in the world (the other three also being within China), and has daily flights from Lhasa Gonggar International Airport, which departs at 7:30am daily and takes around two hours to cross the plateau. At a cost of around 2,700 yuan (approx. US$392.00), the flights are not the cheapest, but if you have very little time to spare and still want to visit the mountain, this is the ideal way to travel there.

Although Mount Kailash is situated in the far west of Tibet in Ngari Prefecture, more than 1,500 kilometers from the capital city of Tibet, it is still relatively easy to get to. As all tourists must be on a pre-booked tour of the region, complete with guide and driver, it is the tour operator that makes all the arrangements for you. This makes getting to Mount Kailash as simple as just contacting us to make all the arrangements on your behalf.