Mount Kailash, far out in the west of Tibet in Ngari Prefecture, is renowned as the most sacred mountain in the world. Standing a mere 6,638 meters above sea level, this pyramid-shaped mountain of black rock is held in reverence by four separate religions, and is held to be the earthly representation of the legendary Mount Meru, the mountain of the gods at the center of the universe. Never scaled or conquered by mortal man, the mountain is protected to maintain its holy status for Hindus, Buddhists, Jains, and Bonpo, and is the most sacred pilgrimage site in Tibet. It is also the location of the famous Kailash Kora Trek, the hardest and most arduous and demanding trek in Tibet. Following the route of the ritual kora, the pilgrimage route of the Hindu and Buddhist pilgrims, the trek takes hikers to altitudes above 5,600 meters at the Dolma La Pass, and is one of the most spiritual trekking trails on the planet.

As the sacred mountain in four religions, the kora route around Mount Kailash is a ritual pilgrimage made by both Hindus and Buddhists, who believe that completing the circuit of the mountain attains merits towards enlightenment. This 52-kilometers circumambulation is normally done in three days by tourists, but for Tibetans, it is better to complete one circuit of the mountain in one day to achieve more merits. A pilgrim who completes 13 consecutive circuits of the sacred mountain is said to be able to attain Nirvana within his lifetime, while one who completes 108 circumambulations of the kora route is believed to be able to attain instant enlightenment.

Mount Kailash trek is one of the most amazing and scenic trekking routes in the region.

A massive circuit by Tibetan standards, the two kora trek around the mountain takes you past five Buddhist monasteries, one of which is the “actual” highest Buddhist monastery on the planet (Rongbuk Monastery at the foot of Mount Everest is the “official” highest Buddhist monastery in the world). As well as passing along two stunning river valleys on the west and east sides of the mountain, the kora route takes you to the famous Dolma La Pass, which sits at an altitude of 5,630 meters above sea level, and is festooned with prayer flags. One of the most amazing and scenic trekking routes in the region, the Kailash Kora Trek is a must for budding high-altitude trekkers from around the world.

How to Take a 3-Day Mount Kailash Kora Trek?

The Kora trek starts and ends at Darchen, a small village located at the foot of Mount Kailash, below the sacred mountain’s southern face. Covering a distance of 52 kilometers and taking three days to complete, the trek around the outer kora route takes you past three high Buddhist monasteries, The Chuku Monastery, Drirapuk Monastery, and Dzultripuk Monastery. You will also pass over the highest point of the trek, Dolma La Pass, on the second day, between Drirapuk and Dzultripuk, as well as trekking along the river valleys of the Lha-chu and the Lham-chu.

Taking on the Kailash Kora is an amazing challenge, and this arduous trek is not for everyone. Done over three days, the route along the trek is one of the most spectacular in Tibet.

The day starts from Darchen, with a trek along the southern edge of the mountain to the entrance to the Lha-chu Valley. After climbing over the small ridge, its cairn bedecked with prayer flags, the route turns north into the valley, and heads up towards the Chuku Monastery, on the hillside around 2-3 hours from Darchen. The trek is a gradual ascent that is relatively easy, and the 6km distance is soon covered. From Chuku, the ascent continues to rise gradually, and you can trek at a moderate pace for the leg up to Drirapuk Monastery, 3-4 hours and 14 kilometers further up the valley.

Below the Chuku Monastery, the bridge crosses the Lha-chu River, and the trail takes alternate routes to Drirapuk. You can choose to trek along either bank of the river, and the eastern bank route is the usual route for the pilgrims. You can take your time on the trek up to the first camping ground, at Drirapuk, as the route up the valley boasts some of the best scenery of the entire kora.

After a night camping or staying in the monastery guesthouse, day two of the trek is the hardest of the three days. Today you will crest the high pass of Dolma La. From the monastery, the ascent is steep and rugged, as you head up to the prohibited sky burial site around 4km from the monastery. While you cannot enter the site, you will pass close to the entrance, and it is best to not be tempted to look in, as this is sacred ground that is not open to tourists. 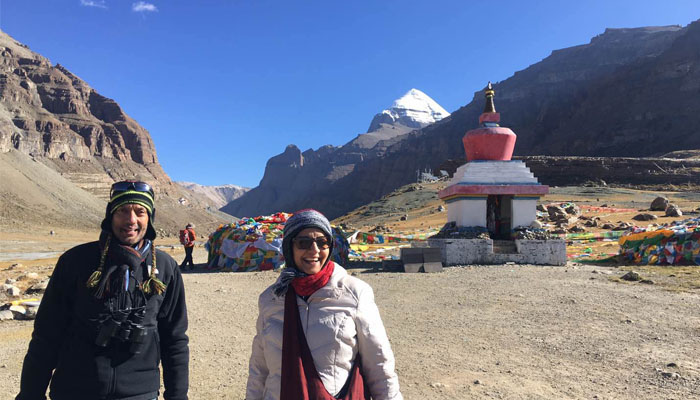 After passing the sky burial site, the ascent gets even steeper, and the rocky ground can be treacherous, so you will need to take care with every step. A trekking pole or two are useful for this ascent. Around 30 minutes after passing the rocky expanse known as Shiva-tsal, a symbolic place for pilgrims, the trail turns east as it heads up the final stretch of the climb to the crest of Dolma La Pass (5,630m). The crest of the pass is covered with hundreds of thousands of prayer flags, as well as a cairn of Mani Stones, and the views from the pass of the rest of the Gangdise Mountain Range are the most amazing in Tibet.

The pass is a place for a rest and a cup of tea to revive ailing limbs, before starting the steep descent down to the Lham-chu Valley and the next stop at the Dzultripuk Monastery. As you reach the valley below, which takes around an hour, you can trek on either side of the river again, and the eastern bank has less marshy areas and more solid ground. After three hours of trekking from the pass, you will enter the grassy fields that herald the next rest stop. Dzultripuk Monastery has camping grounds for trekkers who are camping the route, and the lush fields make a great place to camp for the night. The monastery also has a good guesthouse for those that like sleeping in a bed.

After a good night’s sleep, the final day of the trek follows the river valley closely for a little more than an hour, before climbing up above the river to a narrow canyon. The canyon has some interesting holes dug into the sides, where pilgrims dig to look for holy stones, and the entire canyon is strung with prayer flags from one side to the other. As the train emerges out onto the vast Barkha Plain, the trek turns west to head back towards Darchen, around an hours away along the small dirt road.

Where to Stay during Mount Kailash Kora Trek?

Darchen does have hostels and guesthouses, so you can get a good night’s sleep before starting the trek. However, while there are also guesthouses along the kora route at Drirapuk and Dzultripuk, if you are there in the peak seasons or at times of holy Tibetan festivals, you may find that they guesthouses are full. Both monasteries also have awesome camping sites in lush grassy fields below the monasteries, close to the river. Camping is a popular way to spend the night, and you can sit and relax in the evening watching the stars in the night sky before turning in for the night.

When is the Best Time for Mount Kailash Kora Trek?

The weather in Ngari can be uncompromising at certain times of the year, so the best times for taking on this amazing trek are from April to early June (spring) and late September to the end of October (autumn). These are the times when the weather is dry and pleasant, with clear skies and almost no rain to interfere with your trekking.

The trek can be done in summer, as the area around Ngari sees very little in the way of monsoon rains, though there are times when it can get pretty wet in late July and August. Unless you can be sure of good weather, it is best to stick to spring and autumn. Winter is definitely out, as it can get too cold in this region of Tibet, and there is often snow by the end of December, making the pass almost impossible to cross. 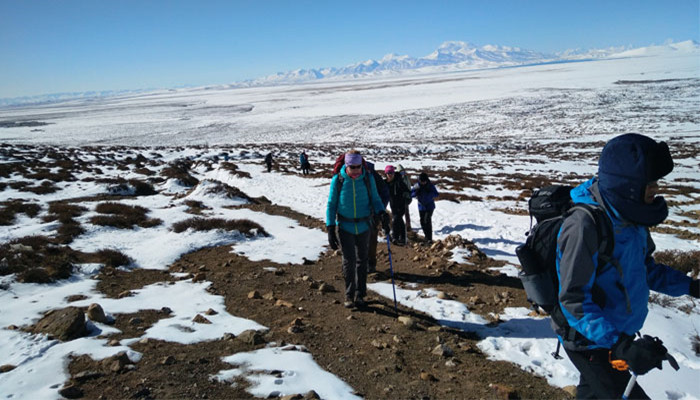 The best time to take Kailash kora is in spring and autumn.

What Permits are Required for Mount Kailash Kora Trek?

Tibet Travel Permit – This is required for entry to Tibet and to travel around in the area of Lhasa.
Alien’s Travel Permit – Required for travel to the “unopened” areas of Tibet outside Lhasa, including Shigatse.
Restricted Areas Permit – This is often called the “Military Permit”, and is required for travel to military-sensitive areas such as Ngari, Nyingchi, etc.
Frontier Pass – While most tours will not actually cross the border out of China, the Frontier Pass is required for all tourists traveling in the areas of the Chinese border with India, Nepal, and Bhutan, which includes Mount Everest and Mount Kailash.

The permits will be applied for once you have booked your tour with us, using scanned copies of your passport and Chinese Entry Visa. Processing can take up to 15-20 days for the Tibet Travel Permit, so it is advisable to book well in advance.

How to Get to Mount Kailash?

Getting to the mountain for the trek can be done from either Lhasa or Kathmandu, depending on which way you decide to enter Tibet.

If you are traveling from Kathmandu to Mount Kailash, you can drive overland to the mountain in Ngari from the Gyirong Port border with Nepal, or you can fly to Lhasa and take the overland route from the Tibetan capital.

Travel from Lhasa requires an overland journey of around 1,577 kilometers, and takes four days of driving, including stops at the various attractions along the way, which also includes Mount Everest Base Camp. The most popular tour to Mount Kailash, our 15-day tour includes touring Lhasa before departure, a trip to EBC, and several other attractions along the way. The best way to get to Mount Kailash, this amazing 15-day tour is ideal for trekkers from all walks of life.

Planning the Mount Kailash Kora trek is pretty easy, as all you need to do is book the trip and turn up with the right clothing and gear. We will do everything else for you, from arranging the permits to providing the guides and driver. A pilgrimage to Mount Kailash is considered to be the ultimate journey for Hindu and Buddhist pilgrims, as this most sacred mountain is the holiest site in Tibet. Even for those that are not Hindu or Buddhist, the trek around the mountain is as much a spiritual experience for you as it is for the pilgrims. The achievement of completing this arduous and strenuous trek at extreme altitudes is a life-changing experience. Not only is it the hardest trek in Tibet, you can be assured that you will be one of a select group of people that have made it on the kora trek around the world’s most sacred mountain.