Mount Kailash Tour Cost: How Much Does It Cost to Travel to Kailash Manasarovar?

Considered to be the most sacred mountain in the world, Mount Kailash out in the far west of Tibet, is an epic adventure that includes one of the best treks on the plateau. Located in the far Ngari Prefecture, close to the borders with India and Nepal, a trip to Munt Kailash can be a little expensive because of the cost of traveling the long distance and the time taken to get there. However, this higher cost of a tour in Tibet can be reduced somewhat with a little prudent planning to make the trip to the sacred mountain a lot more affordable for the budget traveler.

The overall cost of the tour to Mount Kailash depends on a number of factors, from the distance and the time taken to the type of tour, your accommodation, and the other attractions you will visit while on the way to Mount Kailash.

One of the main factors to consider are the documents you are required to have in order to travel to Mount Kailash. You first need to have a Chinese Entry Visa, which you can obtain from the nearest Embassy of the People’s Republic of China in your home or resident country. The cost of the visa does vary depending on the country you are from, and the website of the Chinese Embassy in your own country has a full and updated list of the cost of the visa for different nationalities.

Then you need to get the Tibet Travel Permit to enter Tibet. For visiting Mount Kailash, Alien’s travel Permit, Foreign affairs permit, Military Permit are furthered required. However, while there are a number of permits required for Mount Kailash tour, when you book your tour through us, we make all the arrangements for you free of charge. This means the only travel documents you will need to pay for are your passport and visa. If you already have a valid passport, then your visa is your only documentary expense.

Lying far from Lhasa, there are obviously transportation cost to get to Mount Kailash, and this normally includes the cost of the vehicle, the driver, and the gasoline used to get there. The small village of Darchen is where one can get closest to this mountain by overland. At the southern foot of the mountain, around 1,207 kilometers from Lhasa, it can take up to 4 days to travel there by car. And this include the time when you stop along the way to view other popular attractions on the tour. 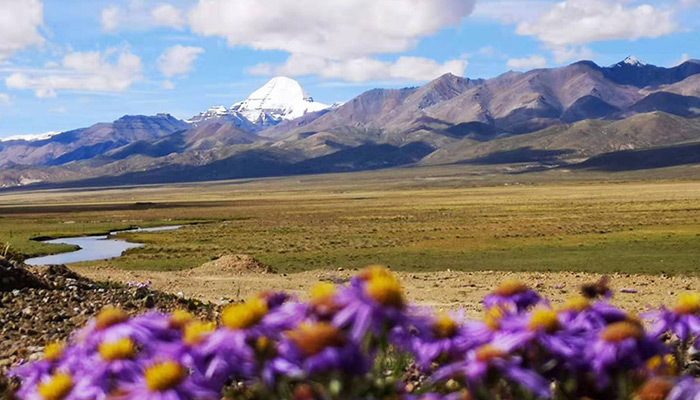 Mount Kailahs lies far away from Lhasa and needs obvious costs on transportion.

While all attractions in Tibet have entrance fees, these are normally included as part of the total cost of the tour, and can vary depending on what you are going to look around while you are in Tibet. On the average tour of Tibet to Mount Kailash, you will normally visit such places as Potala Palace, Pelkor Chode Monastery, Everest Base Camp (EBC), and many others, many of which have small nominal entrance costs that normally help towards the upkeep of the attractions.

Your hotel and meals on the tour are dependent on what you require for your accommodation and where you decide to eat while touring. When in Lhasa and Shigatse, you will have a wide range of hotels to choose from, from basic budget accommodation to luxurious five-star hotels.

However, once you get out of the major cities, the accommodation becomes a lot more basic, and often you have little to no choice of where to stay. EBC is one example of this, where you can only choose from two types of basic accommodation, monastery guesthouse or tent guesthouse, and neither has five-star facilities.

Your dining costs also depend on where you decide to eat while you are on the tour. Most hotels offer breakfast as an included part of the hotel cost, but out in the remote areas, complimentary breakfasts are not really a thing. Food costs in Tibet are a little more expensive than in mainland China due to the cost of transporting the major ingredients onto the plateau.

However, meals are still relatively cheap when compared to meals in most western countries, and you can eat well for a small amount. If you are not a fan of Chinese and Tibetan cuisine, you may want to buy some packet and dried foods to bring with you.

Tips for the Guide and Driver

Hiring porters and yaks for the trek around Mount Kailash is not compulsory, but if you are not fully fit, or want to be able to trek without carrying a heavy pack, then these options are available in Darchen when you arrive. Normally, your guide will arrange the yaks and porters for you, and let you know the cost of the hiring, which you will need to pay outside the main cost of the tour, at the time of hiring. Porters and yaks are not included as part of the overall tour cost, so you need to consider all the options before asking your guide to hire them. 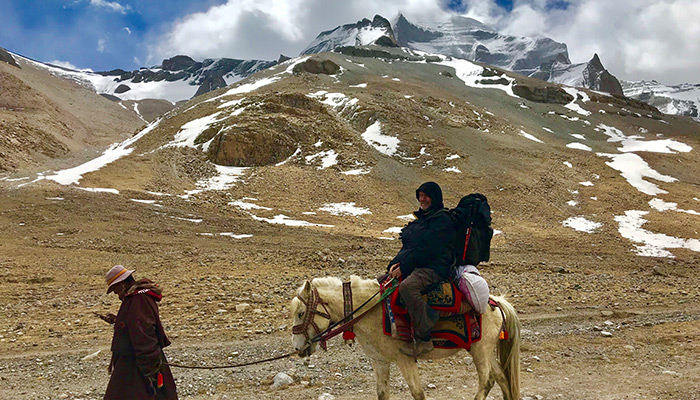 Horse or yak is helpful for the tough trek around Mount Kailash.

How to Budget Your Mount Kailash Tour Cost?

If you are traveling on a budget, there are ways that you can cut down the overall cost of a tour to Tibet to visit and trek around Mount Kailash. With the trip across the plateau being a long and expensive tour, finding ways to cut down on the overall cost is not as hard as you might think. And there are also other ways you can help to reduce the cost of the tour, such as removing all the extraneous expenses such as yaks and porters for the trek and carrying a much lighter pack so that you can manage the trek better.

One of the best savings on a tour to Mount Kailash in western Tibet is to travel in the low season for Tibetan tourism. The high-cost peak season in Tibet is actually in the summer months from June to early September, and at this time the cost of the tour and all the other expenses is much higher. While there is not much chance of being able to get to Kailash and take on the arduous trek in the depths of winter, it is still possible to take on the trek around the sacred mountain in the early and late part of the shoulder seasons. The shoulder seasons in Tibetan tourism are normally in the spring and autumn, from April to May and October to late November.

The lowered cost of the tours in these low-volume periods of Tibetan tourism can help to make the trip more affordable. And while you may not be going to Mount Kailash at the best time of the year for tourism in Tibet, traveling there in early April or late autumn is only a little chillier than in the peak period. Bring a couple of warm sweaters and a good jacket, and you will be fine for trekking around the mount in the cooler part of the year. As these periods are less popular with tourists, you can often find many things about the tour are cheaper, from the actual tour cost itself to the cost of hotels and accommodation and the fees for entrance to the major attractions in Tibet.

Another way to reduce the cost of a tour to Mount Kailash is to join in on one of our amazing small group tours. Private tours of the plateau are expensive, but to help you save on the high costs, we offer the 15-day Mount Kailash small group tour, which you can join in order to save money on paying for a full tour yourself. You will have a pre-arranged itinerary and a pre-set departure date, and you will join other like-minded travelers who are planning the same trip as you at the same time. 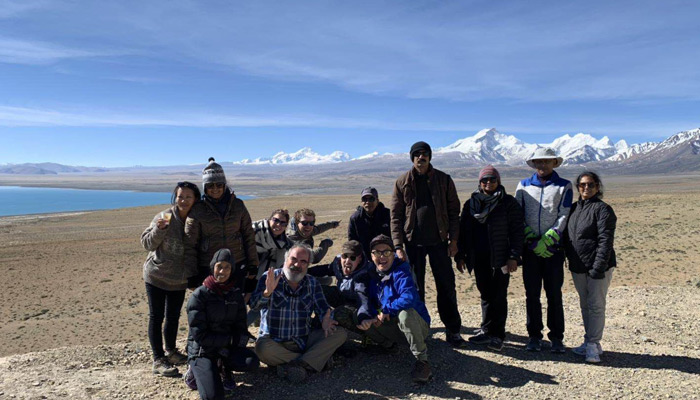 Join in a Mount Kailash Group tour to save on your total cost.

This option for joining in on a small group tour can help you save as much as fifty percent of the overall cost of the tour, as all members of the party share the costs of certain aspects of the overall costs of the tour. The shared costs include the cost of the guide, driver, and private vehicle, and you can also save by sharing room with another party member, to remove the single-occupancy supplement that all hotels charge.

A tour to Mount Kailash in western Tibet need not be an expensive trip that you cannot afford, and with our money-saving options for travelers to Tibet, we can help you make that dream of a lifetime trip to the world’s most sacred mountain finally a reality, and a dream come true.

Be the First One to Comment "Mount Kailash Tour Cost: How Much Does It Cost to Travel to Kailash Manasarovar?"