How to Plan a Mount Kailash Tour from Malaysia?

Getting to Mount Kailash from Malaysia

The most convenient place to enter China for tourists from Malaysia is Chengdu, the capital of Sichuan Province in Southwest China. Flights to Chengdu run daily from Kuala Lumpur, and can be found easily on the many comparison websites for flights in Asia.

From Chengdu, you have two options for getting to Lhasa, Tibet. You can choose to take a flight from the Chengdu Shuangliu International Airport to the Lhasa Gonggar International Airport in Tibet, which is the more expensive option for most travelers. Flights run daily several times a day from Chengdu to Lhasa, and the average flight takes around 2 hours 30 minutes to reach the Tibetan capital airport.

The other option for travelling to Lhasa from Chengdu is by train. Tibet trains run every other day from Chengdu, and take around 36 hours to reach Lhasa. While the trains are a lot slower than the flights, they are a lot cheaper, and can give you a stunning view of the northern part of the Tibetan landscape. The trains travel via Xining in Qinghai Province, and then climb up to the Tibetan plateau, crossing the massive Kunlun and Tanggula Mountain Ranges, before crossing the vast Changtang grasslands heading south to reach the Tibetan capital. 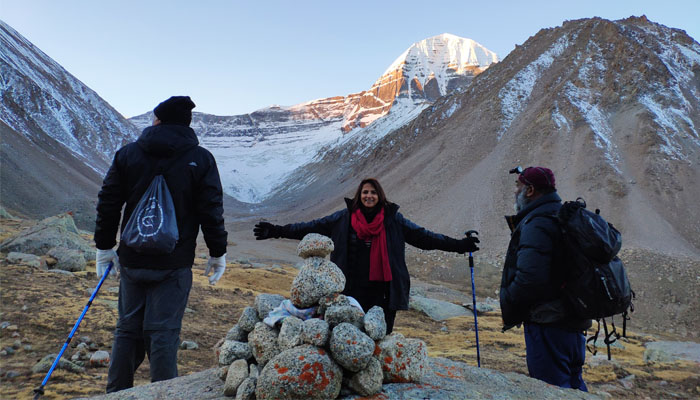 Our clients from Malaysia paid a visit to the holy Mount Kailash.

Once in Lhasa, you will be collected from the station by your guide and driver, and transferred to your hotel. The first couple of days in Lhasa are normally spent acclimatizing and sightseeing around the city, before you depart to travel westwards to Mount Kailash. This epic overland journey takes you through several other notable destinations in Tibet, including Gyantse, Shigatse, and Everest Base Camp (EBC), where you can get a great view of the world’s highest mountain. After leaving EBC, you will travel northwest through the town of Saga to reach Darchen, the small town at the southern foot of Mount Kailash that is the start of the amazing three-day trek around the world’s most sacred mountain.

The alternative to traveling via China is to fly first to Kathmandu in Nepal, and then transfer from there into Tibet. Flights to Kathmandu from Kuala Lumpur depart daily for Malaysian tourists, and it takes around 4 hours 45 minutes to reach the Nepali capital airport.

Once in Kathmandu, you have a choice of traveling by flight to Lhasa and then overland to Mount Kailash or overland from Kathmandu across the Sino-Nepal border to Kailash direct. Taking an overland adventure from Kathmandu to Mount Kailash is a straightforward and direct route to the sacred mountain, but is a more expensive option, as the tour has to be a private tour. You will also miss out on several of the other amazing attractions of Tibet by traveling direct.

The most popular option for getting to Mount Kailash from Kathmandu is to take a flight to Lhasa, and then travel overland from there. Flights to Lhasa from Kathmandu run daily, and take around 90 minutes to cross the Himalayas to the Tibetan capital. 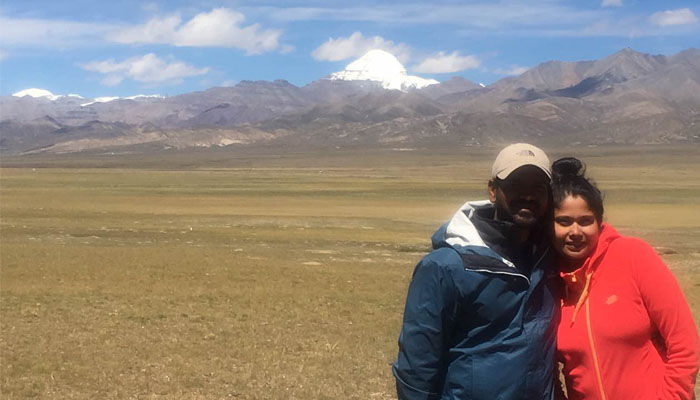 The pyramid peak of Mount Kailash can be seen from distance before we get close to the mountain.

After spending the first couple of days in Lhasa acclimatizing and sightseeing around the stunning attractions of the city, you will leave Lhasa and head west on the road that eventually leads to Mount Kailash. The route to the sacred mountain takes you through several other amazing attractions on the plateau, including Gyantse, Shigatse, and the outstanding Everest Base Camp. At EBC, you will get to view the world’s highest mountain from the most stunning location on the planet. Then you will continue on the long drive, passing through the small town of Saga before finally passing Lake Manasarovar and arriving in Darchen, at the southern foot of the mountain.

Summer, from June to August is available for trekking around Mount Kailash, despite it being the main monsoon season in Tibet. In the far west of Tibet, the monsoon has less effect than in the central and eastern areas, and there is a lot less rain due to the shadow effect of the Himalayas. Most of rains fall in the late afternoon and evenings, so they have little effect on the trek around the sacred mountain. 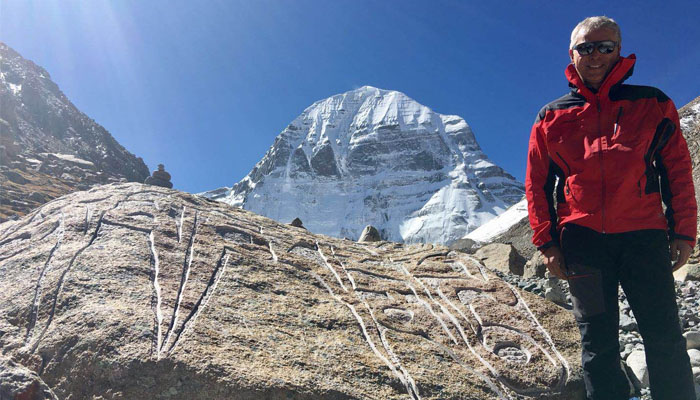 Visiting Mount Kailash in spring leave me a clear image of this giant and holy mountain.

Unfortunately, it is not normally possible to visit Mount Kailash in the winter months from December to March, as there is a higher risk of snow, and there are often blocked passes that you cannot get over. It is also a lot colder in winter, and can be too cold for trekking in the area.

For any Malaysian tourist traveling to Mount Kailash, there are several permits required before you can take the long trip to the sacred mountain. Fortunately, we will make all the arrangements for the various permits on behalf of you.

The Tibet Travel Permit is required for entry into Tibet and travel in the area of Lhasa, while the Alien’s Travel Permit, which is issued once you reach Lhasa, is required to travel to the unopened areas of Tibet, outside Lhasa. The Frontier Pass is required for all Malaysian tourists traveling in the areas of the Chinese border with India and Nepal, and the Military Permit is needed for tourists to travel into the military-controlled areas, such as the area around Mount Kailash in Ngari Prefecture.

Mount Kailash can be a cold place in Tibet, even in the height of summer. You can expect summer temperatures to barely reach double figures. While in spring and autumn, the best time for travel to Mount Kailash, it can be even colder, especially at night.

Layers are the best way to stay warm when trekking around Mount Kailash, and you should take three separate layers of clothing. The inner layer is best made up of thin t-shirts of hiking shirts that you can add to or take off, depending on how cold it is. The middle layer is normally best as fleece or down jacket or sweaters, which can help to trap the air and keep you warm. The outer layer is normally made up of rain coats or windproof coats, which can be added or removed as needed. 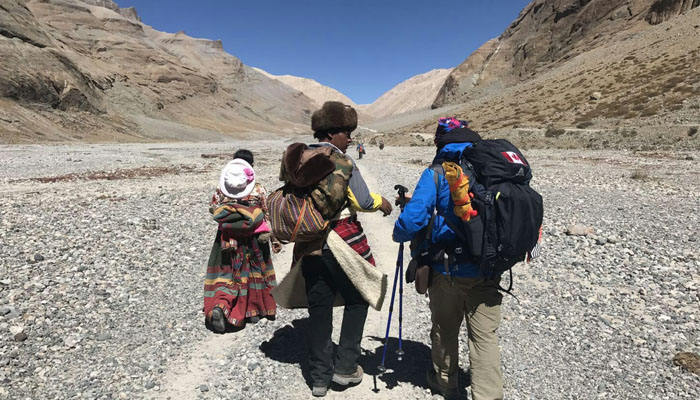 It is normal for travellers to carry backpacks while trekking the Mount Kailash.

Trekking pants are ideal for hiking at high altitudes. Cotton pants are also adequate as long as you have long underwear to wear beneath them to keep your legs warm. It is best not to layer too much on the legs, as you will get too uncomfortable and find it harder to move easily and freely when hiking.

Hiking boots are a necessity, and will keep your feet dry and warm, as well as giving support for your ankles on the rough and rocky terrain around the mountain. Hiking boots also have better grip than rubber shoes, and will help you keep your footing when climbing up and down the passes.

A first-aid kit is recommended as an essential packing item for any trip to Mount Kailash. The kit should include bandages and gauze, Band-Aids, antiseptic ointments and creams, isopropyl alcohol, iodine, and safety pins. It is also handy to have medication for headaches and nausea in the first-aid kit, to help reduce the symptoms of altitude sickness. Your regular medication should also be included, and you should bring enough medication to last longer than your tour, just in case.

Budget the Cost for Mount Kailash Tour from Malaysia

For those traveling on a budget from Malaysia to Mount Kailash, it is possible to reduce the tour cost with a few handy tips. One of the best ways to reduce the cost is to join in on one of our Mount Kailash small group tours. The tour itinerary and departure date are set, but you will join other like-minded travelers that are also heading for Mount Kailash. Small group tours share the higher costs of the guide, driver, and private vehicle between all the members.

A trip to Mount Kailash from Malaysia is an awesome adventure, and an amazing trip of a lifetime for any travelers who love high mountains, shimmering lakes, and the delights of high-altitude trekking. Planning the trip is made easier by the fact that we will make all the arrangements for you once you have booked the tour, and all you have to do is enjoy your trip with our professional local guide.

Read More about How to Plan a Mount Kailash Tour from Malaysia?

Be the First One to Comment "How to Plan a Mount Kailash Tour from Malaysia?"