The highest mountain of the Gangdise Range of the Transhimalaya in Tibet, Mount Kailash stands at an altitude of 6,638 meters above sea level. Renowned as the most sacred mountain in the world, this unusual pyramid-like mountain of black rock is revered by four separate religions. Legends of the mountain abound, from the belief that it is the earthly representation of the legendary Mount Meru to the fabled race to the summit between the Buddhist sage, Milarepa, and the shaman of the Bonpo, Naro Bon-Chung. The location of a sacred sky burial site and with five Buddhist monasteries located around the peak, Mount Kailash is also the location of the hardest trek in Tibet and the most sacred kora route for Hindu and Buddhist pilgrims. An amazing journey, taking a pilgrimage tour to Mount Kailash from Kathmandu in Nepal is the trip of a lifetime.

Nepal to Mount Kailash by Overland

Traveling to Mount Kailash from Kathmandu in Nepal is the ideal way to reach this amazing mountain. Not only do you get to visit the sacred mountain and all of the other spectacular sights and attractions of the plateau, entering from Nepal is the easier option for many travelers from around the world. 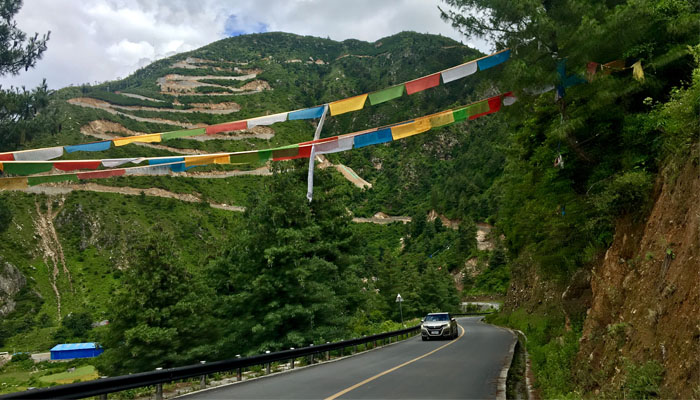 The Road from Kathmandu to Gyirong Port 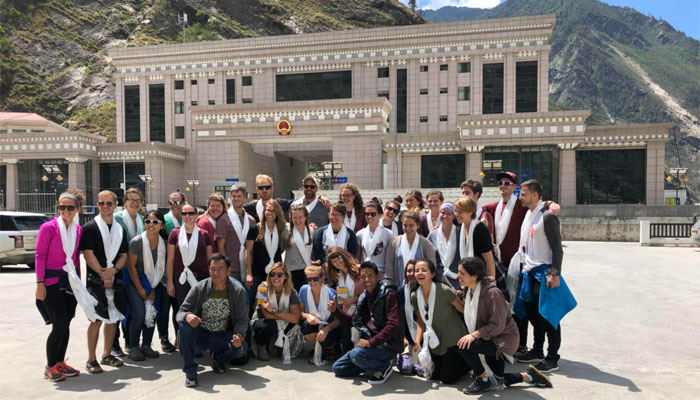 The second leg of the tour is the journey from Gyirong County to Mount Kailash, in Ngari Prefecture. A drive of around 597 kilometers, the trip is normally done in three days. The first part of the trip takes you to Saga, passing by the stunning lake Peiku Tso on the way. Lying at an altitude of 4,591 meters, the lake is a stunning sight with the 14th highest mountain in the world, Mount Shishapangma, in the background. 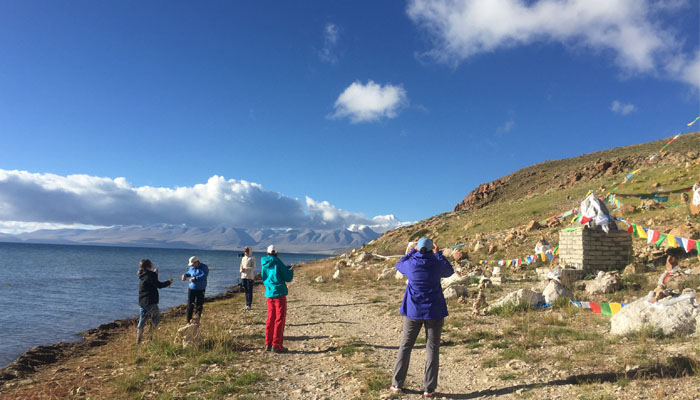 Taking in the beautiful scenery at lakeside of Manasarovar Lake.

The second day of driving takes you from Saga to Lake Manasarovar, at the village of Hor Qu. Traveling around 145km first to Zhongba County of Shigatse Prefecture, the road conditions are good, with asphalt surfacing all the way. After Zhongba, however, the road conditions worsen, changing to dirt and gravel for the rest of the ride to Lake Manasarovar. However, the rough section of the route has some amazing panoramic views of the mountains.

After a stop for the night and some time the following day to explore and hike around part of Lake Manasarovar, you will then finish the last 30km to Darchen, at the southern foot of Mount Kailash. A small village, Darchen is the start and finish of the trek around Mount Kailash, and is the only place to stay in before heading onto the kora route.

Nepal to Mount Kailash by Flight

If you are not inclined to travel overland across the border, then you have the option of taking the flight to Lhasa from Kathmandu, the only country with international flight access to Tibet. You will then take the overland journey from Lhasa to Mount Kailash, which is the more popular route to the sacred mountain.

Fly from Kathmandu to Lhasa

Flights from Kathmandu to Lhasa run daily, with more flights per day in the peak season from May to October. Flights generally take around 90 minutes to make it across the plateau to the Tibetan capital’s Gonggar International Airport. Located in Gonggar County in Shannan Prefecture, the airport lies around an hour’s drive from the Tibetan capital. Flights are provided by Air China and Sichuan Airlines, and the direct flight to Lhasa from Kathmandu crosses directly over the peak of Mount Everest.

Once you arrive in Lhasa, you will spend a few days touring the city’s stunning sights and attractions while you acclimatize to the increased altitude of the plateau. After touring the city, you will head out of Lhasa by road to head for the sacred Mount Kailash. The route follows the G318 Friendship Highway for most of the journey, up to Shigatse prefecture, after which it turns onto the S214 which runs all the way to Darchen. Out of Lhasa, you will first head to the beautiful Lake Yamdrok, before heading on to Gyantse, the home of the Pelkor Chode Monastery and the Kumbum Stupa. Then it is on to Shigatse City for the night. 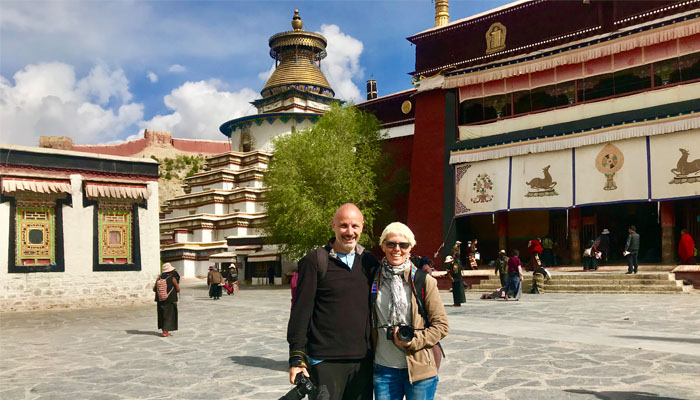 Visiitng the grand Pelkor Chode Monastery on the way to Mount Kailash from Lhasa.

In the morning, after visiting the famous Tashilhunpo Monastery, you will continue along the Friendship Highway to Old Tingri, where you will turn south along the Zhufeng Road to reach the world’s highest mountain, Mount Everest. There you will stop at the base camp to get photos of the mountain and record your visit, and take a trip to explore the nearby Rongbuk Monastery, officially known as the world’s highest Buddhist Monastery at 4,980 meters above sea level. After leaving Rongbuk the following morning, you will take the long road back to the G318 and turn west once more to head for Saga, and then on to Darchen.

Why Choose the Route of Kathmandu to Mount Kailash via Lhasa

While it is possible to head to Mount Kailash overland from Kathmandu, there is little chance to acclimatize properly along the route, and the risk of altitude sickness is much greater. For most people, the option of taking a flight to Lhasa and then taking the overland trip to Kailash from the Tibetan capital is much more feasible. Not only do you get almost three days to properly acclimatize in Lhasa before you leave for Shigatse and Darchen, but you also get to tour some of the most amazing Buddhist monasteries in Tibet, take photos of the lake that is the life-blood of Tibetan culture, visit the most unique stupa on the plateau, and stop of for a selfie with the world’s highest mountain. And as one of the most popular tour routes to Mount Kailash, it is a much better trip to take.

Traveling to Mount Kailash from Kathmandu does require you to have a number of permits, passes, and other documents, though this should not put you off traveling. All tourists to Tibet are required to have a pre-arranged tour with a registered travel agency, who handles all the documentary requirements and paperwork for you.

The Tibet Travel permit is the main permit for entering Tibet and touring the region. It is not possible to cross the border or board the flights to Lhasa without it, and is the first permit we will apply for once you have booked your tour. Using a scanned copy of your passport, we will make the application for the permit with the Tibet Tourism bureau in Lhasa, and once approved, we will have the permit and the invitation letter that comes with it brought to your hotel in Kathmandu. Processing can take up to 15-20 days, so it is advisable to book your tour as early as possible. 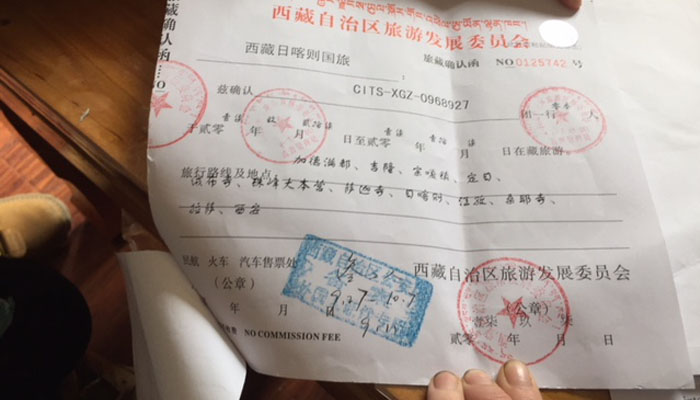 Getting your Tibet Travel permit before entering Tibet is required.

When entering from Nepal, the standard Chinese Entry Visa is not valid. Instead, you will be issued a Chinese Group Permit once you arrive in Kathmandu. Our agent in Kathmandu will visit your hotel to get your passport and have you complete the application form. He will then use those, along with the Tibet Travel permit and invitation letter, to make the application for the visa on your behalf. Individual applications for the Group Visa are not allowed in the Chinese Embassy in Kathmandu. Once the visa is approved, which normally takes around three working days, we will collect it from the embassy for you and deliver all of the documents to your hotel.

Other Permits for Mount Kailash Tour

Aside from the Tibet Travel Permit, there are also other permits you will need for the trip across the border. Whether by flight or overland, all the required permits must be obtained prior to travel. These include the Alien’s Travel Permit, which is required for travel to the “unopened” areas of Tibet outside Lhasa; the Restricted Areas Permit, often called the “Military Permit”, which is required for travel to military-sensitive areas such as Ngari, Nyingchi, etc.; and the Frontier Pass, required for all tourists traveling in the areas of the Chinese border with India, Nepal, and Bhutan, which includes Mount Everest and Mount Kailash. This is required also for those crossing the border by land or air to travel to Lhasa.

Traveling to Mount Kailash from Nepal is easily possible, and you have two options for the routes to the mountain from Kathmandu. Traveling overland across the border direct to Mount Kailash is one option, though the most popular choice for tourists heading for the sacred mountain from Nepal is to fly to Lhasa and travel overland from the Tibetan capital. Whichever way you decide to travel, you are guaranteed an amazing trip to the mountain at the center of the universe.