Top Things to Do and Experience around Mount Kailash

Mount Kailash, in Ngari Prefecture in western Tibet, is renowned as the most sacred mountain in the world, and is a regular destination for pilgrims from all across Tibet. This amazing pyramid-shaped mountain of black stone is also a popular destination for tourists to Tibet, intent on tackling the arduous and grueling Mount Kailash Kora Trek. One of the most demanding treks in Tibet, this three-day hike around the mountain is an amazing experience. However, there are more things to see and do around the area of Mount Kailash than just hiking.

The Kailash Kora Trek is a three-day hike around the sacred mountain that is popular with both tourists and pilgrims, and this remote mountain, the highest in the Gangdise Range of the Transhimalaya in Tibet, sees thousands of visitors every year. The trek covers a distance of around 52 kilometers, and most tourists complete the trek in around three days.

Starting at the small village of Darchen, just below the southern slopes of the mountain, the hike heads west and then north, heading up through the valley to the first stop at the famous Drirapuk Monastery. On the second day, the hike continues up over the high pass of Dolma La, at an altitude of around 5,630 meters above sea level, the highest pass of the tour, to drop down again to the Dzultripuk Monastery.

The final day of the trek is mostly downhill from the Dzultripuk Monastery, where you spend the second night, finishing back in the village of Darchen, where you started. Trekking through the lush valley, this is the easiest part of the whole trek, and a great relaxing way to finish this arduous hike around the sacred mountain.

Meet Pilgrims along the Kora

For tourists, the trek around the mountain takes three days. Pilgrims, however, often manage to complete one circuit of the mountain in around 14 hours, hiking fast around the kora route to complete each circumambulation within one day. A complete circuit is enough to gain merits for the pilgrim’s journey towards enlightenment, and many try to complete 13 circuits one after the other, as this attains more merits. 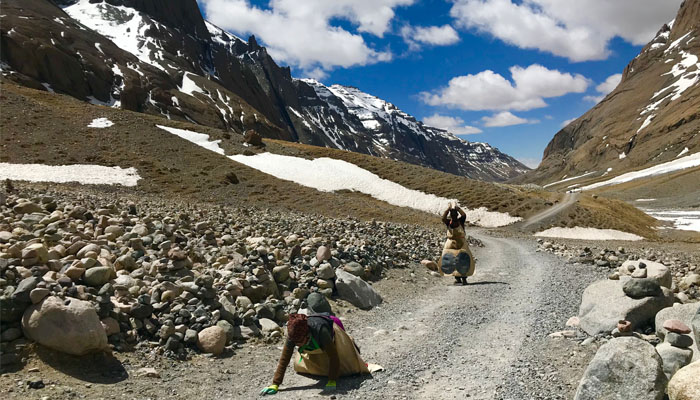 Hiking along the Kailash kora route, it is common to see pilgrims on the same trek as you go.

Hiking along the kora route, it is common to see pilgrims on the same trek as you go, some passing by you at speed, while others move even slower than the normal tourists trekking the route. These slower pilgrims are often performing prostrations, a way of purifying the mind and body of defilements, most importantly of pride. The prostrations are a way of debasing oneself before the gods in worship. Some pilgrims perform the prostrations at various set points around the kora route, which can often be easily identified by the number of pilgrims prostrating in one place. However, the more devout pilgrims will perform one prostration with each few steps, normally one body length, for the whole route around the kora, often taking several weeks to complete one circuit.

Meeting the pilgrims around the kora route is a great way to learn a little more about Tibetan Buddhism and culture, and there are plenty that will gladly talk with you while they are making their circuit of the mountain. However, please remember to respect that these pilgrims are on a holy pilgrimage, and do not expect too much from them.

Mount Kailash is actually surrounded by five monasteries, and these unique high mountain gompas are an amazing sight as you trek around this remote and desolate place. The first monastery you will see is the Chuku Monastery, which is located on the outer kora route, a short hike up the valley from Tarboche. The monastery contains three objects that are always interesting to visitors; the Chuku statue, the Conch Shell and the Teapot. Legend has it that when an invading army tried to steal the objects from the monastery, the gods used their power to stop them. The statue became so heavy the army abandoned it, while the conch shell flew back to the monastery and the teapot boiled with blood instead of tea. 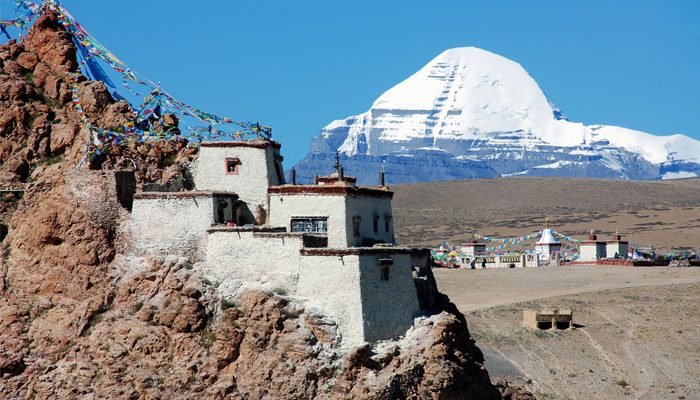 The first monastery to see is the Chuku Monastery which is on the outer kora route.

The second monastery on the outer kora route is the Drirapuk Monastery, the first place you will stop for the night on the three-day trek. Restored in 1986 from its former ruined state, the monastery is fronted by a long row of white stupas, and contains a number of statues and Buddhist relics that have been stored there for centuries.

Dzultripuk is the third monastery, and the second stop for trekkers along the route, another eight hours hike over the Dolma La Pass from Drirapuk. The monastery lies on the west bank of the Zhong Chu (river), and was built around sacred stone formations that are believed to have been formed by Milarepa. The monastery also contains Milarepa’s Cave, where he spent many years of his life. The cave is topped by a stone slab that is said to have the hand and foot prints of Milarepa from when he pressed the slab into place.

On the inner kora route lies monastery number four, known as the Selung Monastery, which sits at 5,020 meters above sea level. Selung was built as a spot for the monk’s meditation, and is the first monastery on the inner circuit. After leaving Selung on the inner kora route, the kora loops up around the smaller Mount Yinjietuo, before coming back down to reach Gyangzha Monastery, at 5,060 meters above sea level. The first Buddhist monastery to be built close to the sacred Mount Kailash, it is the most important monastery in western Tibet.

The Saga Dawa festival, which is held every year at the base of Mount Kailash in the fourth month in the Tibetan calendar, is one of the most important ceremonies and festivals in Tibet. Celebrating the birth, enlightenment, and death of Buddha, it is widely believed that all actions, whether good or bad, are multiplied thousands of times in this auspicious period. The festival lasts for a whole month, and the first days are the most important, with the stunning prayer flag pole at Tarboche being struck and having it prayer flags replaced before being erected in a perfect upright position again. After the ceremonies and flag replacement has completed at Tarboche, the pilgrims and many of the tourists attending set off around the kora route of Mount Kailash. 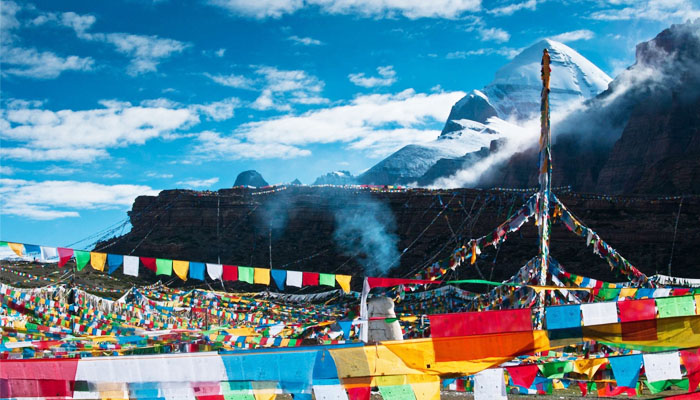 On the way around the Mt. Kailash kora, there is an opportunity to visit a real, moving glacier, one of the few left in the world. Kangkyam Glacier descends from the north face of Mt. Kailash, and is around two hours round-trip hiking from Drirapuk Monastery. At the tongue of the glacier, you can get spectacular views of the sheer north face of Mt. Kailash, and this is a great way to backdrop this rare and beautiful natural phenomenon.

Lake Manasarovar is also a sacred place in Tibet, and it is believed by the Hindu pilgrims to the area that the lake was formed in the mind of Lord Shiva and manifested on the earth as Lake Manasarovar. In Tibetan Buddhism, it is believed that the sacred lake was the place where Maya Devi conceived Gautama Buddha, and both religions believe that to bathe in or drink from the lake can wash away the sins of an entire lifetime. 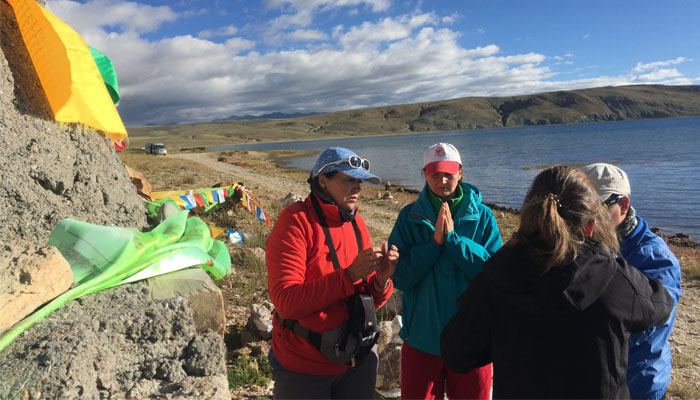 Take a rest during the thrilling Manasarovar Lake Kora.

Located to the northwest of Mt. Kailash is the Tirthapuri Monastery, with its famous relaxing hot spring. Located on the banks of the Sutlej River, it is a popular place for pilgrims to come after they have completed the kora. They bathe in the hot springs to ease the numerous aches of the body after completing the kora trek, and then go to the monastery to view the stone footprints of Guru Rinpoche that are enshrined in the assembly hall. It is believed that the monastery was built on the site of one of the hermitage sites of Padmasambhava from when he visited Tibet to spread the word of Buddhism, and left his sacred footprints in the stone of the ground. 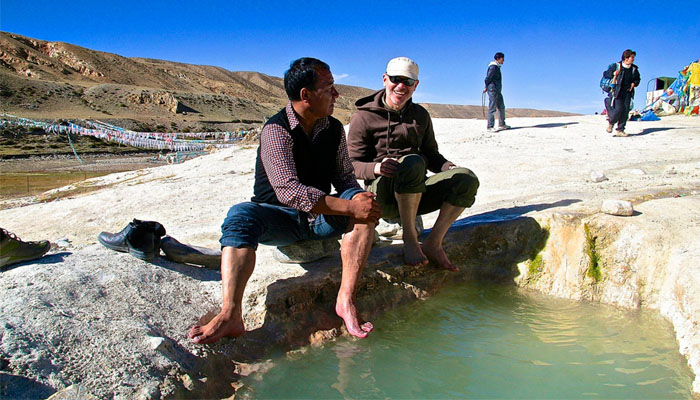 A trekking tour to Mount Kailash is an amazing experience, and one of the beat ways to see the far western areas of Tibet, such as Mount Kailash and Lake Manasarovar. However, with so many other things to do and see in the area, which are not normally included on a Group Tour to Mount Kailash, you may be missing out on some of the most outstanding experiences in Tibet. For the better way to enjoy the Kora Trek, and get to visit the spectacular sights and attractions that can be found in this small area of Ngari, a customized tour can be arranged to make sure that you do not miss out on any of these stunning wonders that western Tibet has to offer.