Can I Take a Helicopter or Flight to Mount Kailash?

Mt. Kailash tour is a must-do trip for anyone planning a visit to Tibet. Many complete the 3-day Mount Kailash kora, which is an important achievement for both ordinary people and Tibetan buddhists. But for time-limited travellers, the normal route travelling to this far-away holy mountain may take much time. So, many will doubt is there a flight directly to Mount Kailash? Or can travellers directly land at Mount Kailash by helicopter?

While there is no airport close to Mount Kailash in Tibet's Ngari Prefecture, there is one airport in the western region of Tibet. Located just outside Shiquanhe, the seat of the prefecture, the Ngari Gunsa Airport is the only place to which one can fly in western Tibet, and lies around 249 kilometers from Darchen, at the foot of Mount Kailash. Also, if you start from Kathmandu, Nepal, you can take a helicopter to Mount Kailash, although there may be some transfers en route.

Kathmandu to Mount Kailash by Helicopter

A popular route for those that want to get to Mount Kailash quickly, it is possible to fly by helicopter for part of the route, with flights on normal airplanes for the other air routes. This is the recommended way for tourists to the mountain that have a very limited amount of time to visit, and have the budget to afford this costly trip. It is also normal for this to be for people that do not intend to travel to other areas of Tibet.

While you will only travel to the mountain and back, you will still need the same permits as any other trip to Mount Kailash in Tibet by any other route. This includes the Tibet Travel Permit, for entry into Tibet and travel in the areas of Lhasa; the Alien’s travel Permit, for travel outside Lhasa to areas such as Shigatse and Mount Everest; the Restricted Areas Permit, for travel to sensitive areas in Tibet, such as Mount Kailash, Ngari, Nyingchi, etc.; and the Frontier Pass, for those traveling in the areas of the Chinese borders with Nepal, India, and Bhutan. While you will not be traveling to Lhasa or Shigatse, the permits are cumulative, and you cannot get the Restricted Areas Permit without Tibet Travel Permit and the Alien’s Travel Permit.

The first part of the trip is the flight from Kathmandu to Nepalgunj, which lies in the Banke District of Nepal. Flights depart from Tribhuvan International Airport four times a day, and take around 60 minutes to cover the 366km flight. 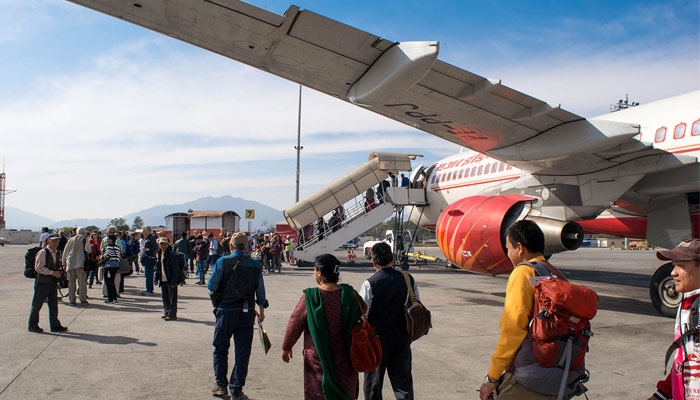 One need to take a flight from Kathmandu International Airport to Nepalgunj.

The second leg runs from Nepalgunj to Simikot, which lies close to the northwestern border of Nepal and China. A distance of around 208 kilometers as the crow flies, this flight normally takes around 60 minutes, and there are only two flights a day with Tara Airlines and Nepal Airlines.

The flight from Simikot to Hilsa, on the western border of Nepal with China, is done by helicopter, and the flight takes around 20 minutes. The village of Hilsa lies on the banks of the Karnali River, where it runs along the border, and the helicopters normally take five people per trip. The Immigration Procedures for entering Tibet from Nepal are done before you board the helicopter. 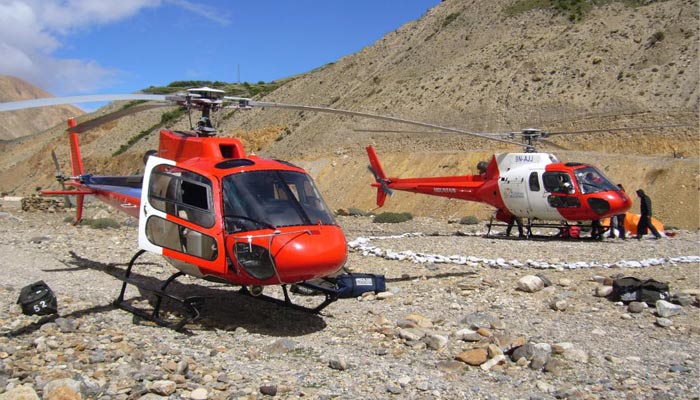 Taking the helicopter from Simikot to Hilsa

Not exactly much of a trek, the hike into Purang County of Ngari takes around ten minutes, crossing the metal bridge across the Karnali River, and then along a dirt road to the buildings on the Tibetan side. At around 500 meters only, this is the simplest part of the whole trip. Once across the river and into Tibet, you will normally be met by your driver and guide, and driven to Taklakot in Purang County for the night.

From Purang the next morning, you will be driven to Lake Manasarovar, which takes around three hours. There you can stop and see the sights, as well as acclimatizing to the altitude and resting in preparation for the arduous trek ahead, before heading on to Darchen for the visit to Mount Kailash. Lake Manasarovar is another place of holy significance in the Buddhist religion, and has many pilgrims circumambulating the kora there. The kora covers about 100 km around the shore of the lake, and takes 4-5 days to complete. Visitors will stay overnight at one of the monasteries on the shore of Lake Manasarovar, and continue to Darchen, the closest place to Mt. Kailash, the next morning. 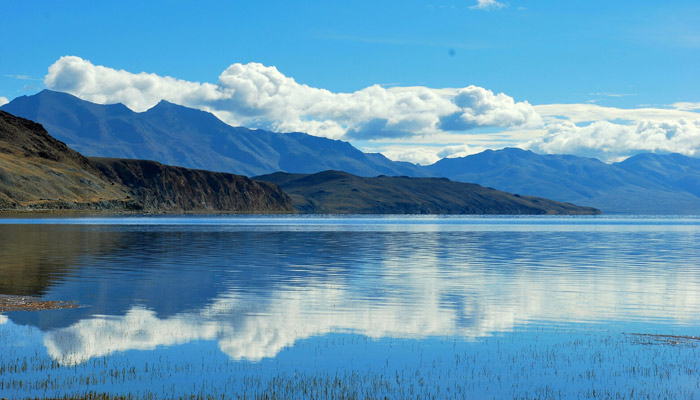 One will stay overnight at Lake Manasarovar before reaching Darchen at the foot of Mount Kailash.

Lhasa to Mount Kailash by Flight

For those that want to travel from Lhasa by flight, it is possible to fly to Ngari and then drive down to Mount Kailash and Lake Manasarovar. While this is not the cheapest route to the sacred mountain, it is not the most expensive, nor is it the longest. For those with little spare time and only a few days to make the trip, the flight and drive combination is ideal.

Flights run daily from the Lhasa Gonggar International Airport to the Ngari Gunsa Airport near Shiquanhe, the seat of the prefecture. A distance of around 1,083 kilometers, take around two hours, departing at around 7:30am every day. The flight is offered by Tibet Airlines, and travelers planning to use this route are required to have all their permits and passes with them before they depart from Lhasa.

Located around 54 kilometers to the south of Shiquanhe, the airport is ideally located for traveling to the area, and lies just 194 kilometers from Mount Kailash to the south. On your arrival at the airport, you will be collected by your guide and driver, who will bring you to your hotel for the night, ready to start the drive south in the morning. 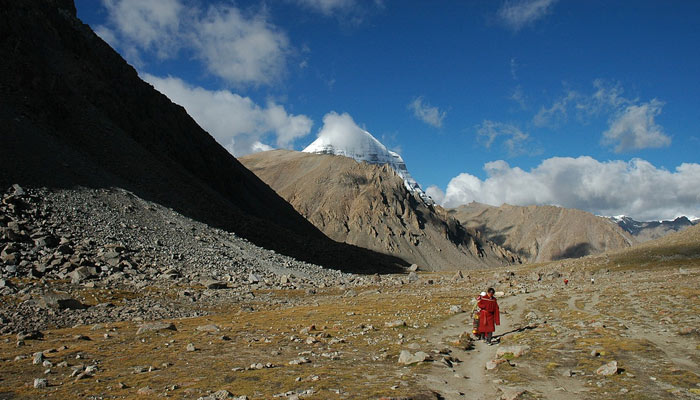 The drive normally takes around 4-5 hours, depending on the weather and seasonal climate, and while the road is pretty good, it is still not as fast as the more major highways in central Tibet. Heading south, the route follows the G219, more commonly known as the Xinjiang Tibet Highway, and passes through a variety of landscapes, from dry desolate desert to lush green valleys and over high mountain passes.

Take the Overland Trip from Lhasa to Mount Kailash Instead

The longest type of route to Mount Kailash is the amazing overland tour from the Tibetan capital of Lhasa. A 15-day trip that leads you through the amazing sights of the Tibetan plateau - not to mention the stupendous sights of the Potala Palace and Jokhang Temple in Lhasa before you leave - you will travel deep into the hinterlands of Tibet, to the mysterious and mythical lands of the western region, where ancient empires grew and crumbled to dust. The route takes you through Gyantse, home of the famous 32-meter Kumbum Stupa, and Shigatse, where the Panchen Lama has his seat in the Tashilhunpo Monastery. After Shigatse, you will travel along the road to Everest Base Camp to view the world’s highest mountain, before heading north to Saga and finally Darchen, your ultimate destination at the foot of the sacred mountain. 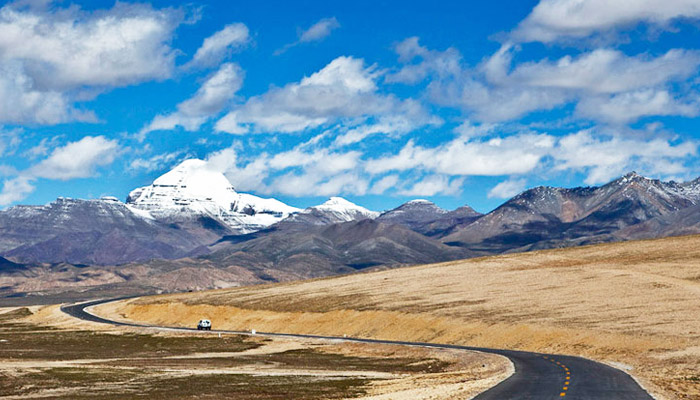 The overland tour may be longer, but it is one that allows you to explore more of the amazing Tibetan plateau, people, and culture, in a way that other routes to Ngari and Mount Kailash do not. You can explore the temples and monasteries of the Buddhist religion in Tibet and visit small local villages where the culture and traditions are no different now than when Buddhism first began in Tibet 1,300 years ago.

The overland trip to Mount Kailash also gives you an advantage in terms of altitude as well. When traveling first to Lhasa and then traveling overland, you get to acclimatize first for a few days in Lhasa, which can help to prevent altitude sickness as you ascend across the plateau to the sacred Mount Kailash. Altitude sickness in Tibet can be a serious concern, especially for those heading to near-extreme altitudes such as can be found in the western areas of the region. Darchen already lies at an altitude of 4,700 meters above sea level, more than 1,000 meters higher than Lhasa. And you will acclimatize there a little before setting off on the trek, as the highest point of the trek is at Dolma La Pass, at 5,630 meters above sea level.

Flights to Mount Kailash in Ngari prefecture of western Tibet are not direct, but there are flights that can reduce the overland travel distance considerably for those that are traveling with little time to spare for overland travel. The flights run from either Kathmandu, via airplanes and helicopter, to Hilsa on the Sino-Nepal border, or from Lhasa to Shiquanhe, from where you drive the rest of the way to Kailash. However, if you have the time, and are more into exploring the plateau and its people and culture, then taking an overland tour to the sacred mountain from the Tibetan capital is definitely the best way to go.

Be the First One to Comment "Can I Take a Helicopter or Flight to Mount Kailash?"