When is the Best Time to Visit Nepal, Tibet and Bhutan Together?

Considered mysterious nations until recently, Tibet, Nepal, and Bhutan become bucket-list destinations for the increasing number of travelers. Diverse landscapes, unique cultures, pleasant locals, and unforgettable scenery are just a few among uncountable reasons for that. Weather permitting, you can see and do many things in Nepal, Tibet, and Bhutan. As with most things in life, good timing tends to make a big difference. So, if you wish to visit any of these fascinating destinations in the shadow of Mount Everest, the world's highest peak, or all of them at once, you should plan the itinerary and timing with care.

The Best Time to Visit Tibet

The climate in Tibet typically varies with the elevation, with significant differences between daytime and nighttime temperatures. This Chinese autonomous province dubbed as "The Roof of the World" features the average altitude over 4,500m/14.800ft, which defines its climate. Winters tend to be very cold, while summers can get hot. Furthermore, air temperatures may make you feel comfortable in a T-shirt around midday, making you don a winter jacket in the evening. When you prepare for a trip to Tibet, you should prepare layered clothing no matter the season. 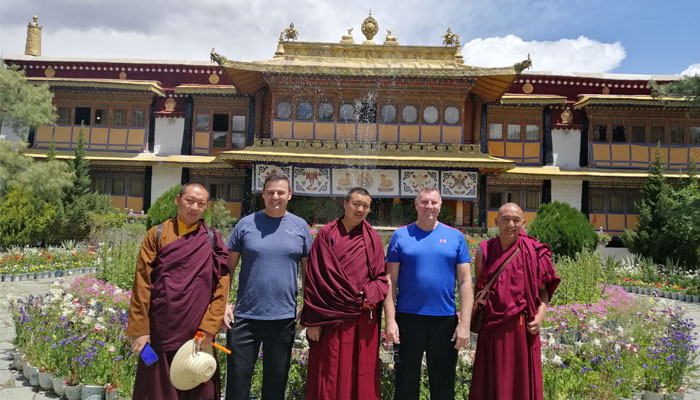 Spring is one of the best seasons to visit Tibet.

When it comes to precipitation, the eastern part of Tibet is under the influence of the monsoon, thus receiving bountiful rainfall during summer. The wet season in Tibet lasts from May to September, with July and August being the rainiest months. While the autonomous province receives roughly 90% of precipitation during the rainy season, July and August receive approximately 65% of that. Hence, you should pack waterproof clothing and footwear for a summer trip to Tibet.

That leaves late spring (April to May, even early June) and early autumn (September and October) as the best times for visiting Tibet if you intend to travel across the whole region. During these periods, you benefit from a balance between travel-related expenditures, pleasant temperatures, and low precipitation. Maybe most importantly, you benefit from lesser tourist crowds, which usually won't make you have a hard time booking transport during these periods. 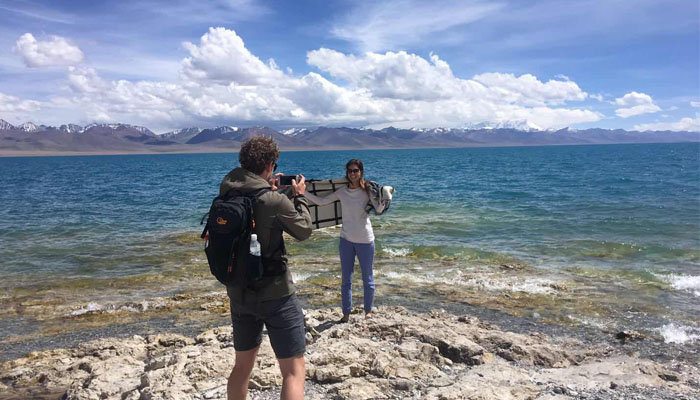 The Best Time to Visit Nepal

Nepal may boast Mount Everest, the world's highest mountain, but, in truth, its average altitude is lower than Tibet’s (3.250m/10.700ft). Hence, seasonal variations are much less volatile compared to Nepal's northern neighbor Tibet. Unlike Lhasa, the capital of Tibet, top tourist hotspots of Nepal, such as the cities of Kathmandu and Pokhara, usually don't deal with subzero temperatures from late autumn to early spring. Still, you can have winter temperatures in the early morning and balmy temperatures characteristic of late spring in just one day during winter. In spring and autumn, the high temperatures remind of summer all too often. So, if you visit top tourist destinations in Nepal, layered clothing is what you need most of the time.

Maybe you have thought about Tibet as of a rainy destination, but the autonomous province receives only a fraction of precipitation compared to Nepal. The wet season in Nepal lasts from May to September, corresponding to what passes for the rainy season in Tibet. During that time, Kathmandu receives more than 1,200mm/47in of precipitation, which is over 85% of the total rainfall. In Pohkara, extensive rainfall occurs from April to October when the city receives over 3.700mm/145in of approximately 3.900mm/154in of the annual precipitation. 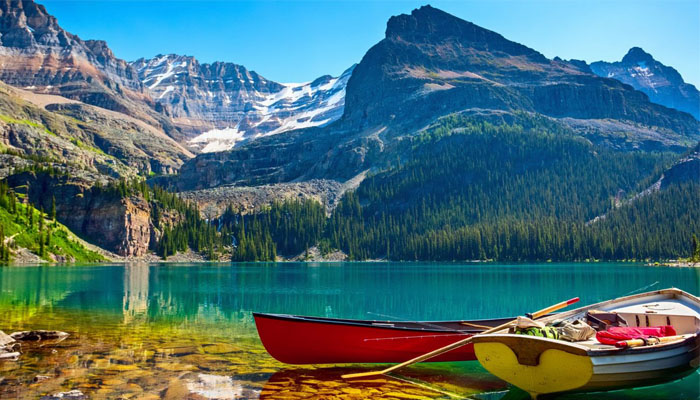 Based on these parameters, the best periods for visiting Kathmandu, the capital of Nepal, are from March to May and between October to November. If you don't mind air temperatures dropping down to a few degrees Celsius above freezing point (upper 30s Fahrenheit) during the night, winter months should work for you too. The time frame for visiting temperate Pokhara is slightly different, lasting from October to March. Finally, spring and the second part of autumn are the best periods for trekking and exploring high Nepali mountains. Winter temperatures are harsh in the mountains, while summer downpours tend to cause landslides.

The Best Time to Visit Bhutan

The Kingdom of Bhutan has a varied climate depending on the altitude and the monsoon season. Higher elevations feature cold winters and warm summers, while lowlands have mild winters and hot summers. The wet season, which runs roughly from late spring to early autumn, brings bountiful rainfall, which tends to render traveling Bhutan quite demanding, if not challenging. While Bhutan features mountains, for the most part, its average altitude is around 2,450m/just over 8,000ft, which makes Bhutan ideal for adapting to high elevations. Thimphu, the capital of Bhutan, lies 2,350m/7,700ft above sea level, while the elevation of Punakha, another top tourist destination of Bhutan, is 1,300m/4,265ft.

Albeit boundaries between the seasons may be blurred, you could regard spring and autumn as good seasons for visiting Bhutan, winter as the shoulder season, and summer as the low season. Heavy downpours are the main feature of Bhutan summers, which may force you to stay most of the time under the roof. Also, dense clouds conceal mountains, which are the trademark of this Asian nation. The rains are the most intense from June to late September, although neighboring months also receive their share of precipitation. 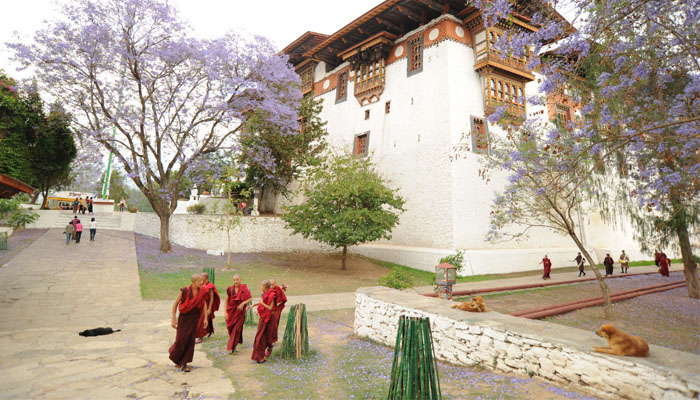 Bhutan cities have different climates, albeit they aren't far away from each other by modern standards. Still, the elevation plays a big part in this. Thimphu, for example, typically has warm summers, with daily temperatures varying from 15°C/59°F to 25°C/77°F on average. Nearby Punakha, which lies at a lower altitude, becomes hot in summer, with average temperatures fluctuating from 20°C/68°F to 30°C/86°F. In Thimphu, winter temperatures tend to drop occasionally below 0°C/32°F, rising up to 15°C/59°F during the day. In Punakha, the lows drop down to 5°C/41°F, while the highs rise up to 20°C/68°F in winter.

In spring and autumn, top tourist destinations in Bhutan benefit from spring temperatures in the morning and summer temperatures in the afternoon. Thimphu features temperatures for a few degrees Celsius (several Fahrenheit) lower than Punakha. Gelephu, the city in the south of Bhutan, has warm temperatures from November to March, which become hot during the rest of the year.

The Best Time for a Nepal-Tibet-Bhutan Tour

Given the average weather values, it turns out that the best periods for visiting Tibet, Nepal, and Bhutan together are spring and autumn. Since traveling directly from Tibet to Bhutan, which share the closed border, isn't an option, you need to travel via Nepal on your way between these destinations.

Tour of Tibet, Nepal and Bhutan in Spring

If you take a Tibet-Nepal-Bhutan tour in spring, paying a visit to Bhutan before proceeding to Nepal and Tibet brings various assets. Plan your Bhutan itinerary to visit the city of Gelephu first, which has balmy weather even in winter. After that, go to Punakha to benefit from temperatures that are particularly pleasant in March and April, leaving Thimphu for the end of the Bhutan itinerary.

When you enter Nepal, hurry to Pokhara before the wet season begins there in April. Plan to conclude your Nepal itinerary in Kathmandu no later than May, which is when the rainy season arrives in the Nepali capital city. If you like mountaineering, plan a visit to the Annapurna or the Himalaya mountain range in the meantime. Finally, go to Tibet to traverse its high mountains before the clouds start concealing them from the second part of June until September.

Tour of Tibet, Nepal and Bhutan in Autumn

Supposing that you plan a trip to Bhutan, Nepal, and Tibet in autumn, your ideal itinerary should look a bit different. Also, note that the time frame featuring ideal weather conditions is narrower compared to spring. Still, autumn is the best season for visiting Tibet, Bhutan, and Nepal by many. 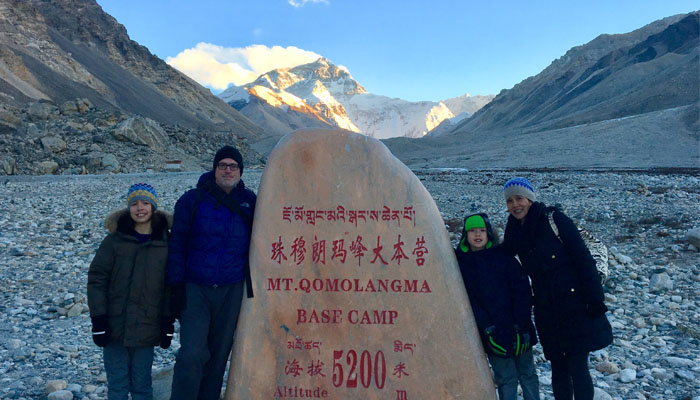 Everest Base Camp in Tibet has clear peak view of Mount Everest in autumn season.

Upon arrival in Bhutan, visit the capital city of Thimphu first. Then proceed to Punakha, where pleasant temperatures should welcome you. If you intend to visit Gelephu, leave it for the end of your Bhutan tour.

The first stop in your Nepal itinerary should be Kathmandu, from where you may go for mountaineering in the Annapurna range or in the Himalayas. Leave Pokhara for the end to avoid the wet season, which ends in October. Finally, return briefly to Kathmandu to catch a connection to Tibet.

Explore the countryside of Tibet before the end of autumn, leaving Lhasa, the Tibetan capital, for the end. Even if winter catches up with you while you are visiting Lhasa, it shouldn't interfere with your plans.

So, considering the average elevations of the three destinations, visiting Bhutan first makes the most sense. Oxygen levels start to decrease between 2,200m/7,200ft and 2,500m/8,200ft above sea level, which renders these altitudes ideal for adapting. Of course, don't forget to spend some time in the Nepali mountains since Kathmandu and Pokhara lie at low elevations by the alpinist standards. That way, you should be in a perfect shape to deal with lower oxygen by the time you arrive in Tibet, the Roof of the World.

Be the First One to Comment "When is the Best Time to Visit Nepal, Tibet and Bhutan Together?"