How to Get to Nepal from India

Traveling to Nepal from India can be an exciting experience, taking in the sights of some of India’s greatest cities, as well as the beautiful countryside you will travel through on the way to the border. Although it does require a lot of patience during the long bus and train rides on both sides of the border, it is a trip worth taking for the stunning sights you can see en route, and the delights of experiencing the Indian and Nepali cultures up close. For those working on a budget, it is an ideal route instead of getting connecting flights straight to Kathmandu. Flights to India are relatively cheap in comparison, and travel across India from one of the major cities to the Nepali border rarely costs more than a few dollars. 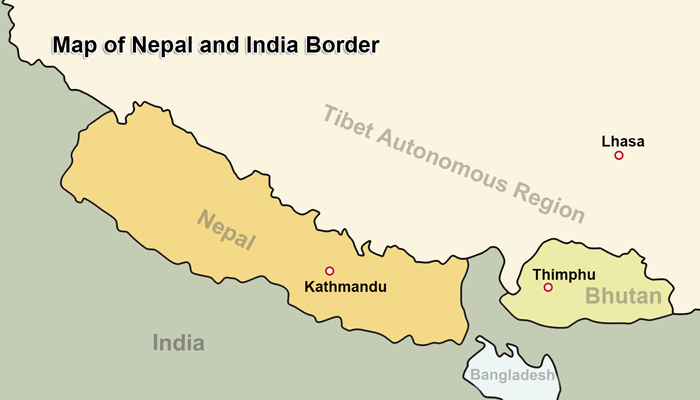 Sandwiched between India and Tibet Autonomous Region of China, Nepal lies at the foot of the Himalayas in Southeast Asia. China is its first neighbor, along its entire northern border, with India on its east, south, and west borders. Home to ten of the world’s highest mountains, including the mighty Mt. Everest, Mt. Shishapangma, and Mt. Manaslu, it is one of the most popular locations for trekkers in the world, and ranked in the top ten most popular vacation destinations globally. The country is shaped like a slightly tapering rectangle, and is 850 kilometers long and 200 kilometers wide.

Nepal is a deeply Hindu country and is filled with temples. The local people often say that there are almost as many temples in Kathmandu as there are houses, and it is no exaggeration. Walk around Kathmandu and as you come to one temple, you can see the next one just down the street. Nepal has a very diverse geography, and just as diverse a climate. The landforms go from the high mountains of the Himalayas to the lowland Terai area at under 500 meters, and the four-season climate changes just as drastically, with monsoon rains being heavy in the lowland plains and almost unheard of in the higher areas.

Bounded by the Indian Ocean to the south, the Arabian sea to the west and the Bay of Bengal to the east, India is one of the largest nations in Asia, and the seventh largest nation in the world. Bordered by Nepal, China, Bhutan to the northeast, Myanmar and Bangladesh to the east, and Pakistan to the west, this diamond-shaped country is the second most populous country in the world.

The largest country in the Indian sub-continent, it was the home of the ancient Indus Valley Civilization, more than 5,000 years ago. In more modern times, the country is a vastly diverse melting pot of different religions and cultures, including Hinduism, Buddhism, Jainism, Judaism, Islam, Sikhism, and Christianity. India also shares part of the Himalayas on its northern border with Tibet, including the Kedar Range of the Greater Himalayas, and several of the major Himalayan Rivers run through the country, including the Ganges and Brahmaputra, which empty into the Bay of Bengal.

Borders between Nepal and India

The border between India and Nepal stretches for 1,751 kilometers around three sides of the country, and connects Nepal with the Indian states of Uttarakhand, Uttar Pradesh, Bihar, West Bengal and Sikkim. Along that immense border are five border crossings into Nepal, at Sonauli, Bhimdatta, Kakarbhitta, Birgunj, and Nepalgunj. 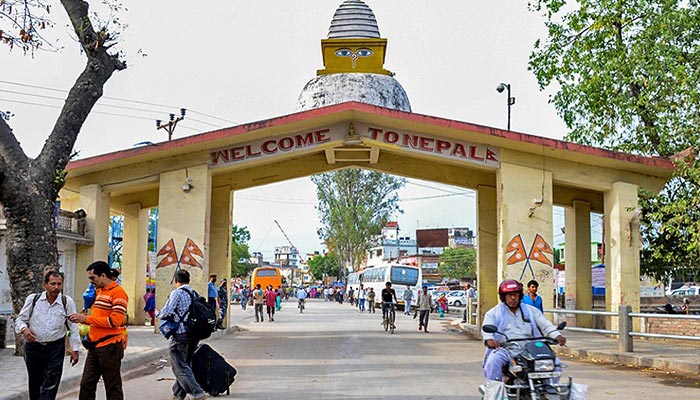 Sonauli, the most popular crossing between India and Nepal

Sonauli is the largest and most popular crossing, and most people going overland to Nepal pass through going to Bhairahawa in central Nepal. From there, you can find several frequent connections that can take you to Kathmandu, Pokhara, and Lumbini.

The border crossing in Uttarakhand, at Banbasa, is the westernmost crossing point into Nepal, and is the fastest route from Delhi to Kathmandu. However, this is still more than 15 hours by bus from Bhimdatta, on the Nepali side of the border, to Kathmandu, and it is possible to get transport to Pokhara.

The Panitanki crossing point to Kakarbhitta is easily accessible from West Bengal, and is most used by people traveling from Darjeeling, Kolkata, Sikkim and the rest of northeast India. Regular buses run from Kakarbhitta to Kathmandu which take around 14 to 16 hours, or Pokhara, which can be reached in about 15 hours. You can also stop off at the Chitwan National Park on the way; just get off at the park’s travel hub, Sauraha, nine hours from Kakarbhitta.

The border crossing at Birgunj in central Nepal crosses from Raxaul on the Indian side, and there are direct trains from Kolkata to the town. From Birgunj, it is around 6 or 7 hours to Kathmandu by bus, or about 8 hours to Pokhara. However, there are shared jeeps that run to Kathmandu for a little more than the cost of a bus ticket, which arrive there in only 4 to 5 hours.

The crossing from Uttar Pradesh to Nepal at Nepalgunj is one that is rarely used, though it is open to tourists. It is hard to reach on the Indian side, and therefore less popular.

How to Travel from India to Nepal?

Fly from India to Kathmandu, Nepal

It is easy to fly from Delhi to Kathmandu, where you can enjoy the spectacular views of the Himalayas as you fly low over them. The Delhi-Kathmandu route is the cheapest by air, although flights also run from Mumbai and Kolkata. 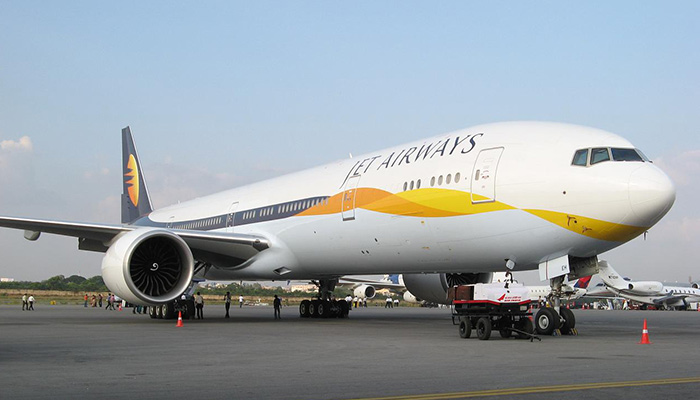 Take flight to Nepal from India

From Delhi, the flight takes around 1 hour and 40 minutes, and costs about US$65 plus airport taxes. Flights from Indira Gandhi International Airport run numerous times a day, seven days a week from airlines such as Air India, Jet Airways, Nepal Airlines, IndiGo, and Bhutan Airlines, as well as many more running indirect flights for a lower cost. Flights start at 7:40am and the last flight leaves at 9:05pm.

From Mumbai, there are only two airline running flights to Kathmandu, Jet Airways and Nepal Airlines. The flight takes around 2 hours 30 minutes, and costs from around US$ 85. Both flights run direct, and tickets can be booked online, through a travel agent, or direct from the flight counters at the Chhatrapati Shivaji International Airport in Mumbai. While Jet Airways offers two flights a day, seven days a week (departing at 8:10am and 11:25am), Nepal Airlines has only one flight that leaves at 5:25pm on Sunday, Wednesday, and Friday.

Kolkata has the least number of flights to Kathmandu from its Netaji Subhas Chandra Bose International Airport. With only one flight leaving at 1:55pm on Monday, Tuesday, Thursday, and Saturday, it takes around 1 hour and 20 minutes to reach Tribhuvan International Airport, and the flight costs around US$97 with Air India. There is also a connecting flight through Dhaka, that takes 4 hours 10 minutes with Biman Airlines that runs daily.

Travel overland to Nepal from India

There are several routes you can take from India to Nepal, using trains and buses, and sometimes the shared jeeps that are becoming more widely available on both sides of the border.

Delhi to Kathmandu - Taking the train from Delhi, your first step is to get to Gorakhpur Junction. The train takes around 14 hours, and runs several times a day for around US$ 18. From Gorakhpur Junction, you can get a jeep or local bus to the Nepali border at Sonauli for a cost of around US$ 2, which takes around three hours. After the walk across the border, it is just a few minutes’ walk to the bus station at Bhairahawa, where you can get the bus to Kathmandu for about US$ 2. Buses leave regularly throughout the day until 7:00pm.

Varanasi to Kathmandu - There is a direct bus between Varanasi and Kathmandu every 2 days, which takes around 15-16 hours, and costs around US$ 21. Tickets can be bought at local travel agents in Varanasi, or you can book them online if you are using a local Indian mobile number. It is also possible to book tickets at the bus station, which is advisable since many travel agents will not book the trip as they get no commission. 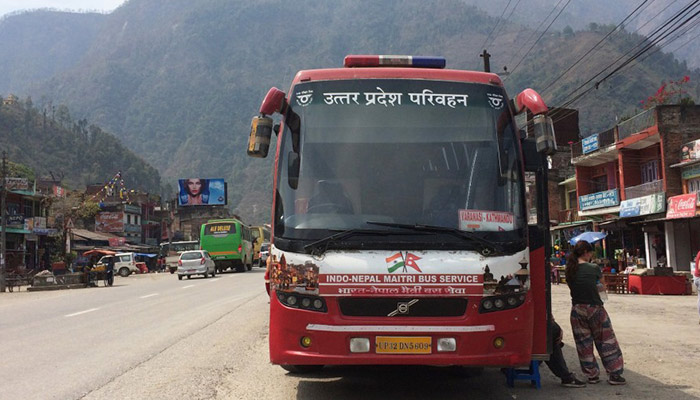 Travel overland from Varanasi to Kathmandu

The bus leaves Varanasi at around 10:00pm every other night, and travels overnight to Kathmandu. The border crossing is relatively easy, and if you need a visa, they provide the popular visa-on-arrival service at the Nepal border. The roads are a little bumpy in places, especially from Varanasi to the border, and there are often road construction on this route, so it can take a lot longer than expected.

There are numerous buses that ply the route from Varanasi to the border at Sonauli/ Bhairahawa, and run several times a day. The trip takes nine hours and costs around US$ 3. The bus station at Sonauli is a few minutes’ walk from the border, and from Bhairahawa there are regular buses to Kathmandu every day for just US$ 2.

Buses also run from Delhi to Bhimdatta, costing US$ 2, which takes around 5 hours. You can also travel from Kolkata by train to Kakarbhitta for US$4, and to Birgunj for around US$5. There is also a bus available that runs from Lucknow to Nepalgunj, which is rarely used, and a short trip from Darjeeling to Kakarbhitta, which takes less than an hour.

Starting from Aug, 30th, 2017, international tourists with valid travel documents (Tibet Travel Permit and Group Tourist Visa) can enter Tibet from Nepal or vice versa via Rasuwagadhi and Gyirong Port. While it all seems very complicated, we have made it easier for you by taking care of flight ticket booking and travel documentary requirements for you, allowing you to better enjoy planning your trip to India Nepal and Tibet without the stress and worry. Just tell us your plan and we'll take care of the rest!