Nepal to Tibet: How to Travel to Tibet from Nepal?

As one of the top tourist destination in Southeast Asia, Tibet is an amazing place to visit, located on its high-altitude plateau at the Roof of the World. Filled with high snow-clad mountains, an innumerable amount of holy lakes, and hundreds of ancient Buddhist monasteries and sacred locations, the Tibet Autonomous Region is a land where the ground meets the sky and the sharp needles of the Himalayas poke up into the clouds like giant teeth.

Tibet’s closest neighbor is Nepal, the landlocked Himalayan kingdom that has become a Mecca for trekkers and mountain enthusiasts from around the world. Once the world’s most popular backpacking destination, this varied country has everything from the world’s highest mountains right down to tropical jungles filled with tigers, elephants, and crocodiles. And for those traveling to Tibet from international destinations, there is no better place to start your trip and enter the plateau than from Kathmandu.

Why Travel to Tibet from Nepal?

As the only country in the world with international access to the Tibet Autonomous Region of China, Nepal has a unique advantage over anywhere else in Asia when it comes to travelers heading for Tibet. Lying side by side on the ridge of the mighty Himalayas, these two close neighbors have shared history, culture, and much more over the last several thousand years, and are as close as any neighbors could ever be, even sharing the world’s highest mountain between them.

One advantage of traveling to Tibet from Nepal is the mountains themselves, especially Mount Everest, the world’s highest mountain. Straddling the border between Nepal and China, Mount Everest’s summit lies right on the border between the two, with the northern slopes in Tibet and the southern slopes in Nepal. This means that there are two base camps to choose from, both of which lie at altitudes above 5,000 meters. You can take advantage of being able to see or visit the massive mountains from both sides. 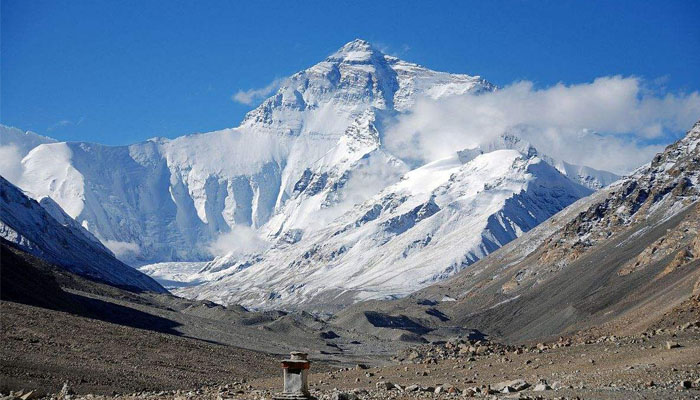 Mount Everest is straddling the border between Nepal and China.

When traveling overland into Tibet, you have the opportunity of traveling to Mount Everest at the start of the tour, instead of last as with most tours that begin in Lhasa. This gives you an advantage on travel, as you will then be descending as you travel across the plateau, reducing the risk of altitude sickness.

Entering from Nepal also makes it easier when it comes to documents for Tibet. Instead of arranging the Chinese Entry Visa yourself through a Chinese Embassy before you travel, your travel agency will make all the arrangements and make the application on your behalf once you arrive in Kathmandu. This saves you the issue of traveling back and forth to the nearest embassy in order to arrange the visa to enter China.

Travel from Nepal to Tibet by Overland

Nepal to Tibet Overland via Gyirong

Overland travel into Tibet from Nepal is fast becoming one of the most popular ways to get to Tibet. Instead of taking a flight to Lhasa from Kathmandu, you travel overland through Gyirong Port, the Chinese border checkpoint on the border between China and Nepal. Getting there is relatively easy, and is a six-hour drive from the Nepali capital, though you may want to stop along the way and start again from closer to the border in the morning, as the border closes at 3pm Nepali time.

The border crossing of Gyirong Port was only reopened as recently as August 2017, after an earthquake in 2015 closed all border crossings from Nepal to Tibet. Now a major international border crossing, with Rasuwa Gadhi being the checkpoint on the Nepali side, thousands of people and vehicles with goods pass through this overland port every day.

An 8-day Kathamndu to Lhasa adventure that takes you across the massive Himalayas, this classic tour is one of the most popular tours of Tibet, and is a great way to travel across the plateau from Nepal for those with only a limited amount of time to spare. Crossing the border at Gyirong Port, you will stop to acclimatize at Gyirong Town, before taking the long drive to Mount Everest Base Camp, at 5,200 meters above sea level. The base camp lies a short distance from the remote Rongbuk Monastery, renowned as the highest Buddhist monastery in the world. 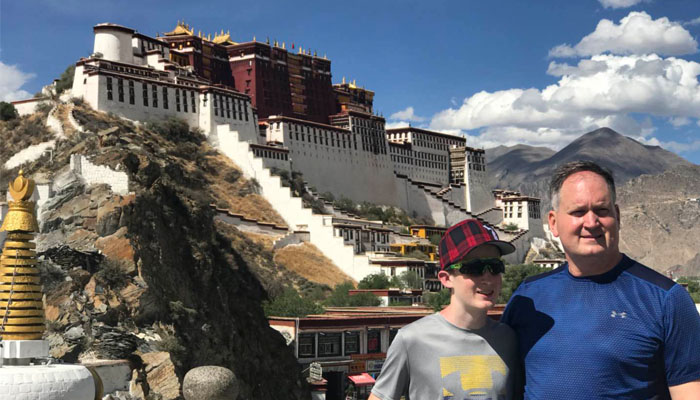 Visit the holy Lhasa city at the end of the 8-day Nepal to Tibet overland tour.

From there, you will double back to the Sino-Nepal Friendship Highway, and travel east through Shigatse, the second city of Tibet, and Gyantse to reach the Tibetan capital of Lhasa. Known as the City of Sunshine because of the huge amount of sunny days throughout the year, this stunning city is the religious and cultural heart of Tibet, and is the location of the most sacred temple in Tibet, the 1,300-year-old Jokhang temple. An outstanding city with a host of popular attractions, it is also the location of the Potala Palace, the stunning Red and White palace of the former government of Tibet in the times of the Buddhist lama rule of this plateau land.

If you are feeling a little more adventurous for your trip to Tibet, then the 15-day tour that includes both Mount Kailash and Mount Everest as you travel to Lhasa is an awesome adventure that takes you to the world’s highest mountain and the world’s most sacred mountain in one fell swoop.

Heading north from Gyirong takes you to the sacred lake of Manasarovar, known as the location where Maya Devi conceived Buddha and where Buddhist and Hindus bathe in the lake to absolve them of a lifetime of sin. Then it is on to the nearby sacred mountain of the Buddhists, Hindus, Jains, and Bonpo, Mount Kailash. At just 6,638 meters, this is still the highest mountain in the Gangdise Range of the Transhimalaya, and is the location of Tibet’s most arduous trek, the Mount Kailash kora. 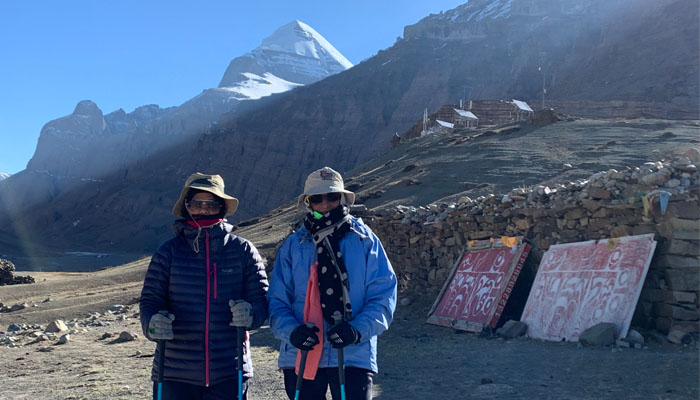 Trek around Mount Kailash in Tibet.

After completing the three-day trek around the sacred mountain, you will travel south again to stop off at the world’s highest mountain, Mount Everest. With its base camp on the northern slopes at an altitude of 5,200 meters, the mountain stands tall above the range of the Himalayas, and the views from the base camp in Tibet are the best in the world.

Then it is on to Shigatse and Gyantse, as well as the sacred Lake Yamdrok, as you traverse the Tibetan plateau to the Tibetan capital of Lhasa. You then get three days to explore this stunning City of Sunshine, and discover the treasures of the Potala Palace and the ancient Jokhang temple, unknown for more than 1,000 years to the outside world.

Travel from Nepal to Tibet by Flight

Flights depart from Kathmandu daily throughout the year, with several flights being added as additional in the peak months of Tibetan tourism, from June to September. The flights to Lhasa Gonggar International Airport from the Tribhuvan International Airport in Kathmandu take around 90 minutes to cross the 607 kilometers across the plateau, and pass directly over the summit of Mount Everest along the route.

The fastest way to get to Lhasa from Nepal, these flights are not cheap, and can cost from as much as 300 US dollars per person for a one-way economy flight. The daily flights are run by two major Chinese airlines, Air China and Sichuan Airlines, and depart in the mornings, which means you have time to explore a little of the City of Sunshine before your first day in Tibet ends. For many people traveling to Tibet from international locations outside Asia, Nepal is a popular stopover before traveling to Tibet by flight.

The first thing you will need is the Tibet Travel Permit, which is required for entry into Tibet and travel around the region of Lhasa. This is obtained by us using a scanned copy of your passport in advance of your trip. Processing normally takes up to 15-20 days, so it is advisable to book well in advance to ensure that your permit is ready for your departure date.

You will also need to have the Chinese Group Visa, which is a special visa only available to those entering Tibet from Nepal. This is not applied for in person or in advance, but is done on your behalf by your travel agency when you arrive in Kathmandu for your trip to Tibet. Once you arrive, we will get your passport and make the application at the Chinese Embassy, which does not permit personal applications. Processing is normally three working days, so you should be in Nepal a least five days before you are due to travel.

The first is the Alien’s Travel Permit, which is required for travel to the “unopened” areas of Tibet outside Lhasa. This is normally obtained once you reach Lhasa when traveling from mainland China, but for those traveling from Nepal, we will apply for and receive the permit in advance of your trip on your behalf. The other permit that is normally applied for in Lhasa is the Frontier Pass, which is required for all travelers heading in the general areas of the Chinese borders with Nepal India, and Bhutan. We also apply for this pass in advance, so it is ready when you are ready to travel.

Finally, you will also need the restricted Areas Permit, also known as the Military Permit. This is required for travel to certain military restricted areas of Tibet, such as Ngari and Nyingchi, and is only required for entry from Nepal to Tibet if your trip takes you to Mount Kailash in Ngari Prefecture. This is also applied for in advance in the same way as the Tibet Travel Permit is done, and can take up to two weeks to process.

Traveling across the border from Nepal to Tibet, whether by flight or overland by car, is now the most efficient way to get to the plateau region and is becoming more popular with international tourists due to the convenience and ease of access. With the travel agency handling all of your documents, this leaves little for you to do once you have booked your tour except turn up and enjoy yourself on your awesome tour on the Roof of the World.

Distance from Nepal to Tibet:

Routes from Nepal to Tibet:

1) Kathmandu to Lhasa by Overland:
it covers around 1120 kilometers by road distance, following the Friendship Highway.

2) Kathmandu to Lhasa by Flight:
it takes about 1.5 hours to get to Lhasa Gonggar Airport from Tribhuvan International Airport in Kathmandu.

Be the First One to Comment "Nepal to Tibet: How to Travel to Tibet from Nepal?"