When is the Best Time to Tour Tibet and Nepal

For many people touring in the Himalayas, combining a tour of Tibet with a tour of Nepal is one way to experience the unique cultures of both places. Contrary to what can be found on most western travel sites, getting to Tibet is not as hard as western travel agents make out. This is normally due to them having to liaise with Tibet-based tour operators, who are the only agents who can obtain your Tibet Travel Permit for you. Therefore, whether you go from China to Tibet and Nepal, or Nepal to Tibet, only a registered Tibetan Tour Operator can obtain the permits needed to travel in the region.

Why Combine Nepal and Tibet Tours

One of the main reasons visitors combine the two places into one tour, is the immense cost of an individual tour to both places. The best way to get around this is to join our small group tour, with other visitors traveling to the same places. These Tibet and Nepal tours can help to reduce the cost of driver and guide by sharing the cost between 8-10 people. A guide is a requirement when traveling in Tibet and travel alone is not permitted. Moreover, your guide is the only person who can get your permits to travel outside Lhasa from the local government departments in the city. 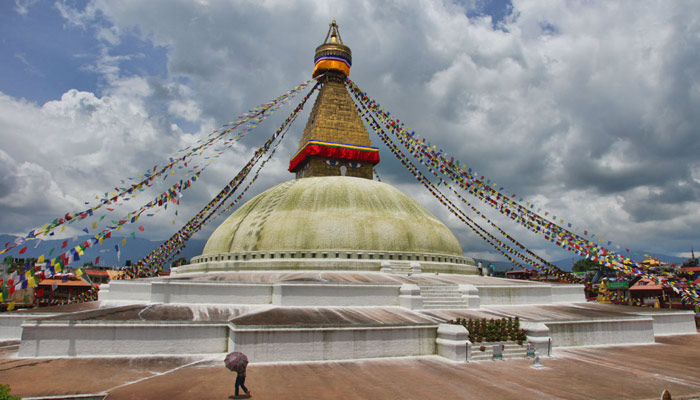 Nepal is famous for its buddhist culture

As Tibet’s biggest neighbor (excluding China), Nepal is as full of adventure and experiences as Tibet. Probably the best way to do this is to book a tour from Kathmandu to Lhasa, starting in Nepal’s capital city, and traveling across the mighty Himalayas to finish your tour in Lhasa, the capital city of Tibet Autonomous Region. Alternatively, you can do it the other way round, starting in Lhasa, and finishing in Kathmandu. The choice is yours, and both routes take in the world’s most spectacular sights. 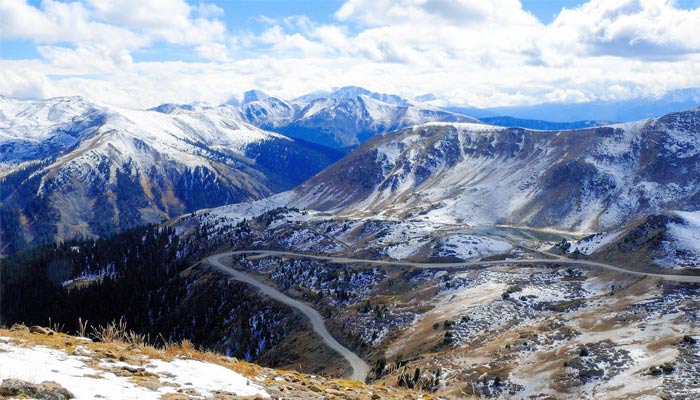 The tours include visits to some of Tibet’s most famous sites, several ancient temples, and monasteries, and the spectacular scenery of the Himalayas, including Mt. Everest. Then it is a rollercoaster ride across the Sino-Nepal border into Nepal, and down in to the Kathmandu valley, where you can experience the culture of the Nepali people. 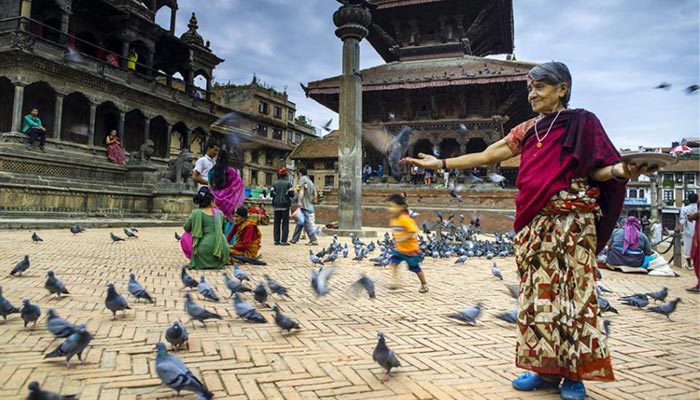 You can experience the culture of the Nepali people in Kathmandu

What Does a Combined Tour Include?

Kathmandu is a vibrant and noisy city, packed full of palaces and temples. The temples in the famous Durbar Square date back as far as the 12th century AD. It also includes the most important Hindu temple in Nepal, Pashupatinath Temple, which sits on the banks of the Bagmati River. The former Royal Palace, which was the site of the infamous massacre of the Royal Family by their Crown Prince in 2001, is now the Narayanhiti Palace Museum, and a great place to visit to understand more of the culture. 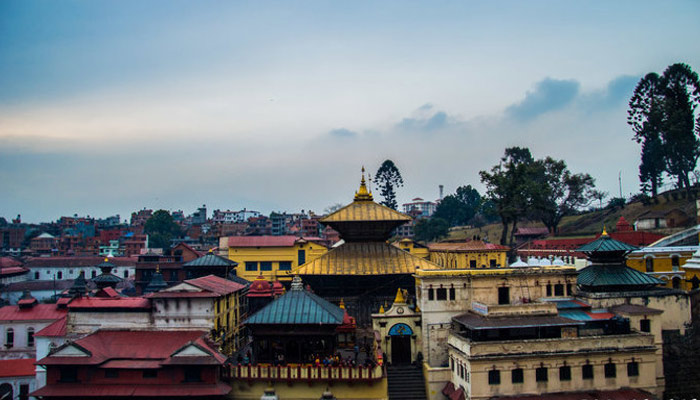 If you are going from Kathmandu to Lhasa, after staying in Nepal for a few days, and visiting the amazing sights, it is time for the most spectacular part of the trip – the journey across the Himalayas. The route runs from Kathmandu on the Friendship Highway, an 829km road that links Lhasa with the Nepal border, at Gyirong Port. The road from Kathmandu to the Sino-Nepal border is another 114km long, and winds up into the Himalayan foothills to Gyirong Port, which is directly west of Mt. Everest. 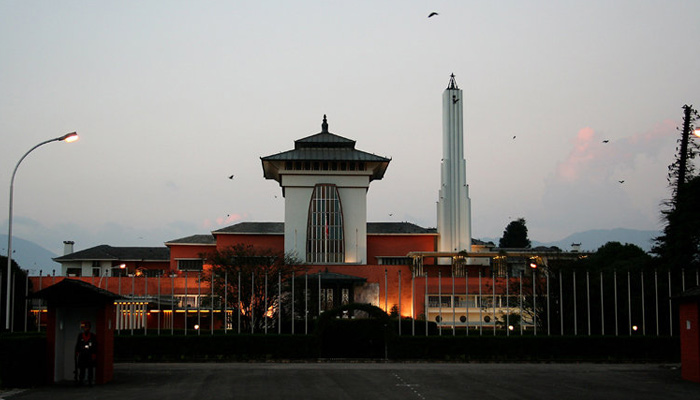 There you will notice a big change in the road quality. While the Nepali side is still relatively rough, on the Tibet side it becomes a smooth, well-paved road. Once in Tibet, the tour takes in such amazing sights as Everest Base Camp and Rongbuk Monastery, which is below the great mountain at an elevation of 5,200 meters. You can also visit Sakya Monastery, which was founded in 1073, and is the principal monastery of the Sakya sect of Tibetan Buddhism. 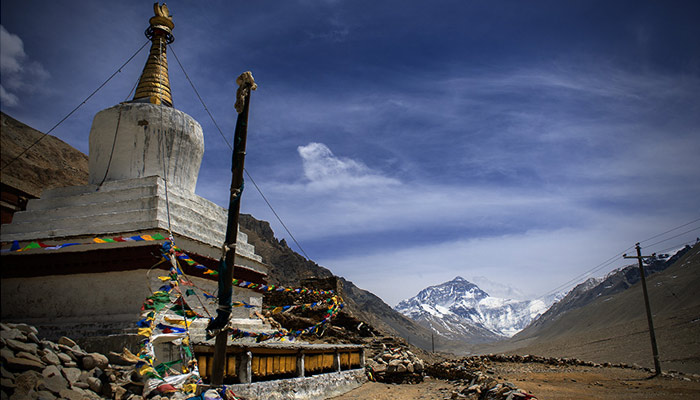 Shigatse, the second largest city in Tibet, is the next stop, before heading out onto the road to Lhasa. En route, you will pass through the ancient county of Gyantse, which is home to the Palkhor Chode Monastery, or Gyantse Kumbum, which dates back to 1427. The Kumbum is a 35-meter-high chorten, which is decorated with stripes up to its golden, crown-like dome. You will also pass by, and visit, Yamdrotso Lake, 11km south-west of Lhasa. The lake is one of the three Holy Lakes of Tibet, is 130km long and 70km wide, and is the largest inland lake on the northern range of the Himalayas. 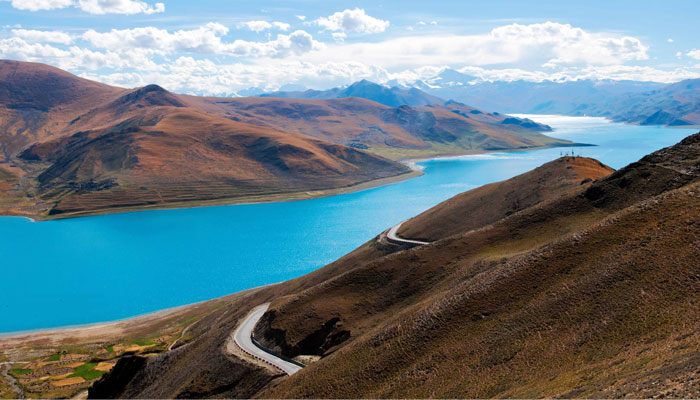 In Lhasa, you will get o see the famous Potala Palace, the former winter palace of the Dalai Lama, as well as the holy Jokhang Temple, which holds the famous statue of Buddha at the age of twelve, and is probably the most revered item in Tibetan Buddhism. 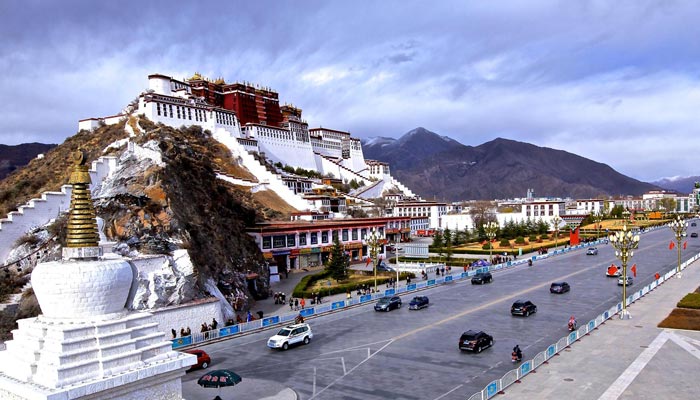 At the end of the tour, you can take a flight back to Kathmandu and travel on from there, or you can take the train from Lhasa to Xining, in Qinghai Province of China. The train is an amazing journey of 22 hours that takes in some of the most wonderful sights on the plateau, as well as being a world-record breaking railway. 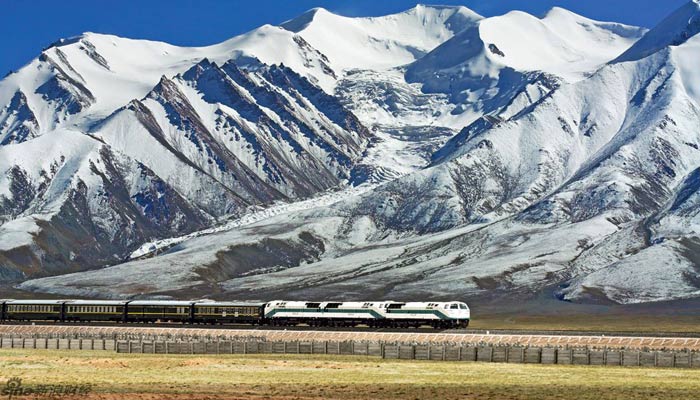 The train from Lhasa to Xining

When is the best time to tour Tibet?

The best season to travel from Kathmandu to Tibet is from April to October, as many of the passes and roads in the Himalayas are impassable in winter. While the tour can be done from Kathmandu to Lhasa, it is better to go from Lhasa to Kathmandu, as you are less likely to experience altitude sickness along the tour, as the train from China to Lhasa helps to get you acclimatized. 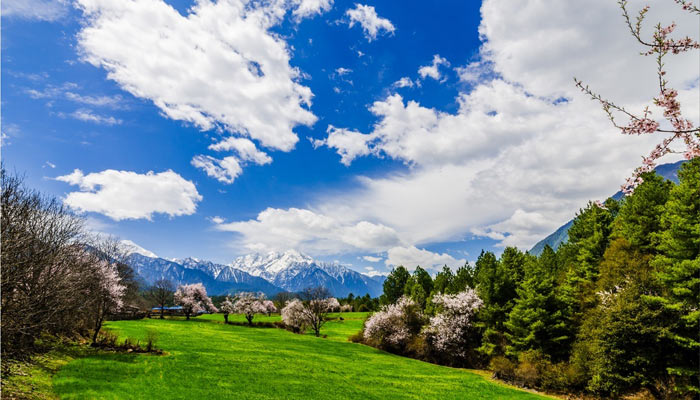 The weather in spring is mild

Tibet has four seasons, although it also has a monsoon period, like many Asian countries. From April to May, it is spring, and the weather is mild with plenty of sun and limited clouds. The same climate can be found in fall, from September to October. Spring and fall are the best times to visit the region, as the weather is mild, there is little to no rainfall, and it is not too hot for trekking and mountaineering. Summer is the monsoon season, from June to August, and the rains can be heavy in some places, although the monsoon is light here compared to tropical monsoon countries. It can also be hot in the summer, with temperatures as high as 35 degrees. But it can still drop to freezing at night, even in the height of summer. Winter is a nice, cold time to visit, from November to March, but the region is closed in February and March, and tourists are not allowed. Travel can also be restricted in the winter months as heavy snow and ice can block many of the roads and tracks in the west of the region, making travel outside Lhasa and the immediate surrounding area almost impossible. 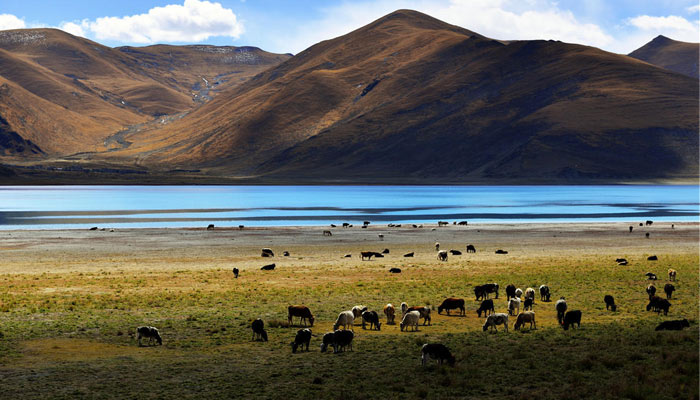 Fall is also the best time to vist Tibet

What to pack for Tibet and Nepal tour

For your packing, there are some things that you will need to include, as Tibet can get quite cold, especially at night. Warm clothes - sweaters, fleeces, thick coats, and boots - are essential. If you are traveling in winter, sunglasses are advised to prevent snow blindness. Lip balm is also essential, as the wind can be chaffing to the lips. It is advisable to include some snacks in your pack, as you will need to replenish energy quickly in the high altitudes, and a basic first aid kit, with altitude sickness medication, in case it is needed.

For the Nepal part of your trip, you will not need such warm clothes, as the altitude is much lower, and the temperature much higher, once you get down from the Himalayan region. It should be noted that you would be walking on mostly unpaved roads in most of Nepal, outside the cities, so your trekking boots will be useful there. In Kathmandu during the peak months, the weather is mild, but summer (mid-June to mi-September) is also monsoon season, so your waterproof jacket may be necessary too.

Other than that, you can get away with light polo shirts or cotton shirts, and light pants or shorts for most things. Sandals can also be worn if you are not trekking, as the cities have paved roads, and it is warm enough, though not too hot – around 230C is the maximum is the summer months. 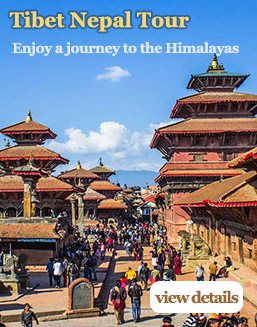