Touring Tibet is an experience of a lifetime, and with the opening of the border crossing into Nepal at Gyirong Port, now your tour can include a trip to the spectacular country of Nepal. Right next door to Tibet, Nepal is a country that is set partially in the Himalayas, and offers other aspects of Himalayan life, as well as life and cultures in the lower altitudes and lowlands of the country. 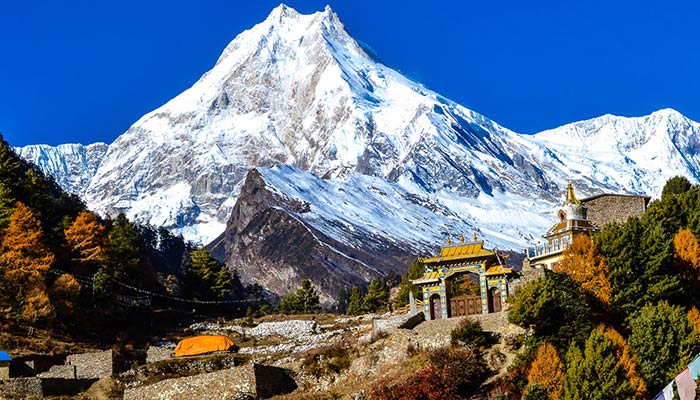 Nepal is a land of snow peaks and Sherpas.

Set in between the high Himalayas and the hot Indian plains, Nepal is a land of snow peaks and Sherpas, monasteries and mantras, treks and trails. There are relatively few countries in the world that are as well organized for independent travel as Nepal. Thamel and Pokhara, two of the major hiking locations, are a haven for trekking shops, bakeries, and pizzerias, with medieval city squares vying with the modern stores of Nepal’s traders. Nepal remains one of the cultural powerhouses of the Himalayas, and can offer world-class palaces, hidden shrines, and the slow pace of traditional mountain life.

Taking a tour through Tibet to Nepal means you get double the excitement, double the adventure, and more than double the culture, with Buddhist monasteries in both places, and the multiple cultures of the different ethnic groups that are scattered across the Himalayas. In the Nepal region of the Himalayas there are seven distinct ethnic groups, known collectively as Janjati, each with their own unique culture, and while majority are Buddhists, some are Hindus and a few are even animists or shamanists.

When looking at booking a tour across Tibet to Nepal, there are a large number of tours available, with different lengths, different itineraries, and mostly, different costs. Many newcomers to the Himalayas do not really know what to expect, and what to look for in a tour, which is why there are many to choose from, and expert advisers on hand to help you make the best choice. Of all the tours provided by Tibet Tour, these are the most popular of their tours, and the ones which give the most experience of all.

A detailed trip exploring the best of Tibet, traveling overland from Lhasa to Kathmandu, this expedition across the roof of the world may only be seven days long, but each day is a huge adventure. Filled with sights from the sacred Jokhang Temple to the stupendous heights of Mount Everest, this is one tour that will show you the rich traditions and stunning landscapes of Tibet, before sending you down from the mighty Himalayas to the delightful sights and sounds of Kathmandu.

Lhasa
Starting in Lhasa, the capital of Tibet, the tour takes you to some of the most spectacular sights of the city, including the ancient Potala Palace; Jokhang temple, the most sacred man-made site in Tibet; and Barkhor Street, the kora route of Jokhang, and main market streets of Lhasa. You will also take a trip outside Lhasa, first to Drepung Monastery, one of the Great Three monasteries of the Gelugpa sect. Sitting at the foot of Gambo Utse, 5 kilometers outside Lhasa, it was founded by Jamyang Choge, one of the disciples of Tsong Khapa, in 1416. In the afternoon you will travel to visit Sera Monastery, another of the Great Three monasteries. Founded in 1419, the name, Sera, means "wild rose" in Tibetan, and was named because of the roses that were in bloom on the hill behind it when it was built. 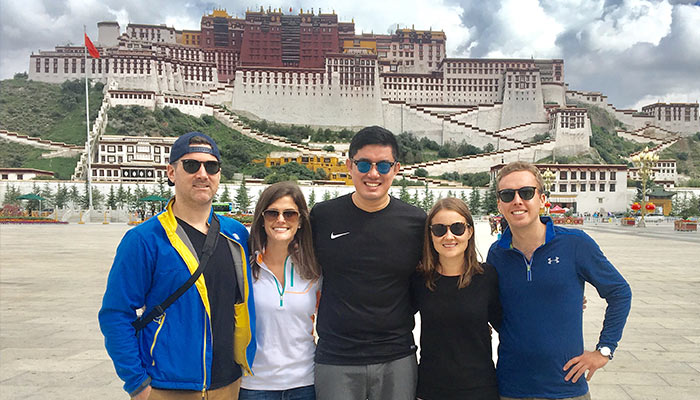 On the Road
After the delights of Lhasa, you will then hit the road, for the journey to the west of Tibet, including Shigatse and Gyantse, the second and third largest cities in Tibet. Your guide will drive you from Lhasa to Gyantse, with stops at Lake Yamdrok, which lies nestled between the lofty mountains, and you will see the holy mountain, Nyenchen Khangsar, its 7,191 meter peak standing tall in the distance. The trip to Gyantse also passes close by the Karola Glacier. In Gyantse, you will get to visit the unique Pelkor Monastery, which is rare due to it housing three different sects of Tibetan Buddhism under one roof. You will also get to see the Gyantse Kumbum, a giant architectural stupa that stands 34 meters high, and consists of nine floors, each with its own unique chapels, and the spectacular Tashi Lhunpo Monastery, with its ancient statue of Jampa, the “future god”. 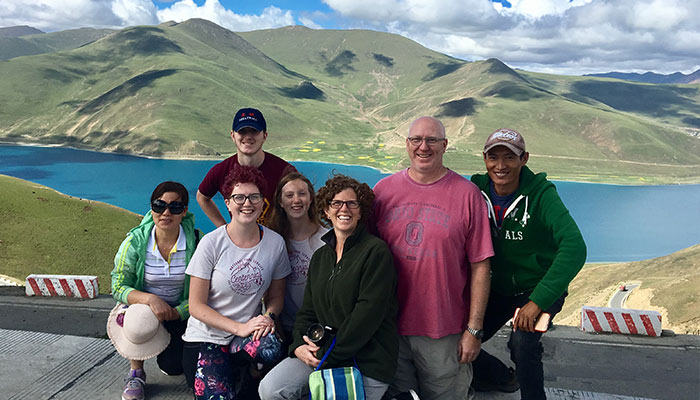 Mount Everest
Further afield, after obtaining the Alien’s Travel permit, the tour heads for the border between Tibet and Nepal, and the famous Rongbuk Monastery, staging point for many climbing expeditions to Mount Everest. The route also includes Gyatso-La Pass, one of the highest in Tibet. After a night at Rongbuk, the highlight of the tour is the visit to Everest Base Camp (EBC), which is the best place in the world to photograph the stupendous mountain. At 8,848 meters, the highest mountain in the world stands tall above the other peaks nearby. From EBC, you will get to see the ancient town of Tingri, before heading to the border crossing at Gyirong Port, for the next leg of your journey. 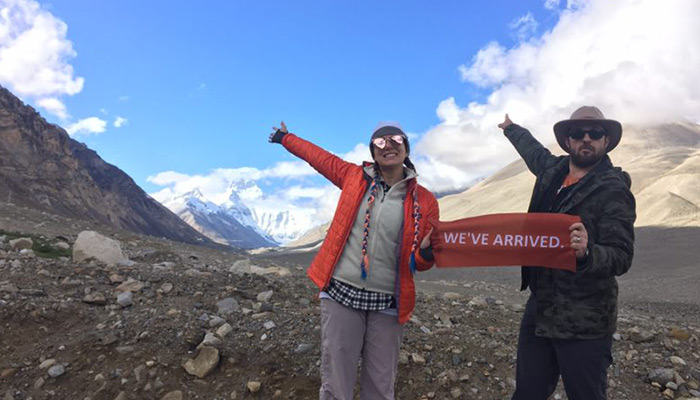 Starting and ending in the beautiful city of Kathmandu, in Nepal, this tour encompasses the best of the Nepalese and Tibetan cities, with an aerial view of the mighty Himalayas as you fly over them. Visiting the capital city of Tibet, Lhasa, the tour also heads out overland to Gyantse, the third largest city in the region, before topping things of in Shigatse, Tibet’s second largest city, and the home of the Tashi Lhunpo Monastery. Discover beautiful lakes, pristine glaciers, and mighty mountains as you tour the region, and some of the most famous monasteries in Tibetan Buddhism.

In Kathmandu
The Kathmandu part of the tour starts with the world-renowned Kathmandu Durbar Square, which is the site of the Hanuman Dhoka Palace Complex, the former residence of the Nepali Royal Family until the 19th century. Swayambhunath is a huge golden stupa festooned with prayer flags that flutter in the breeze, on a hill that overlooks the entire city, and Patan City, the second largest city in the Kathmandu Valley area, has one of the oldest Buddhist temples in Nepal that dates back to the 12th century. 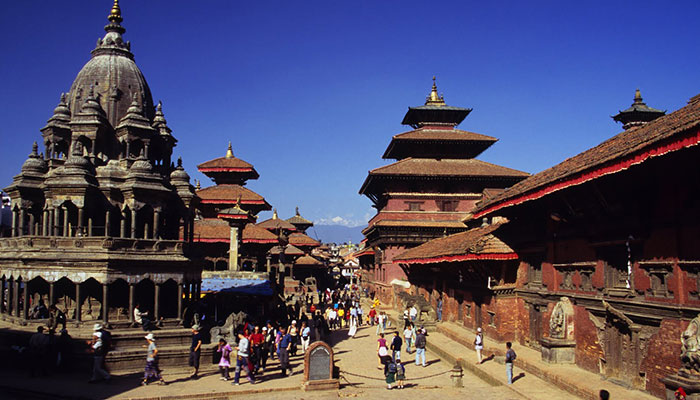 You will also get to go further afield in Nepal, to visit the ancient Hindu temple of Pashupatinath, and Boudhanath, one of the largest stupas in Asia, and a focal point for Tibetan Buddhism in Nepal. In Bhaktapur, the royal palace square is a conglomeration of temples and stupas built around the central palace, and is one of the most charming places in the Kathmandu Valley.

Flying to Lhasa
The journey to Lhasa crosses the mighty Himalayas by plane, and gives an amazing view from above, before landing at Lhasa Gonggar International Airport for the next part of the trip. In Lhasa, you will get to tour around the holy temple of Jokhang and the beautiful red-and-white Potala Palace, as well as a trip to Drepung and Sera Monasteries, where you can see the monks in the daily duties, and watch the afternoon debates on philosophy. 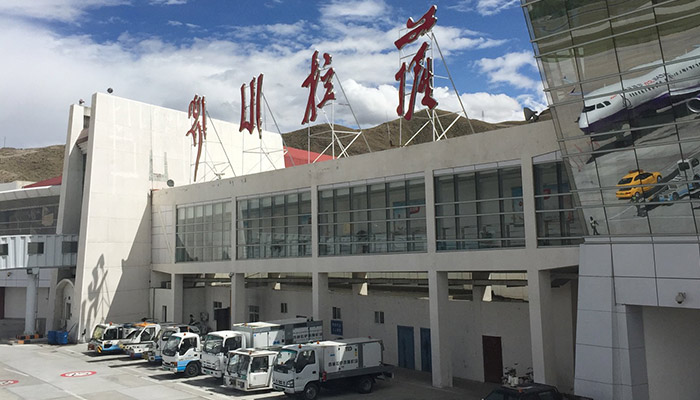 The drive overland is the next leg of the journey, and en route to Gyantse, you will get to stop by the shimmering Lake Yamdrok, one of three holy lakes in Tibet, surrounded by high mountains. In Gyantse, the tour includes the famed Pelkor Monastery and Gyantse Kumbum before moving on to Shigatse, as well as getting to explore some of the ancient city of Shigatse, you will take a tour around the Tashi Lhunpo Monastery, the largest functioning Buddhist institute in Tibet, and the home of the Panchen Lama. On the road back to Lhasa, you will be able to stop and admire the views along the Yarlung River valley, with its vast, wide river bed. Then it is back to Kathmandu with another flight over the Himalayas, and an aerial view of the world’s highest mountain, Mount Everest, if the clouds permit.

A short tour of one week in the main capitals of both Nepal and Tibet, this tour is best for those who want to explore the exquisite architecture of Kathmandu and experience the mystical Buddhist religion of Tibet. Both cities can boast UNESCO World Heritage Sites, and will give you the chance to get up-close with the cultural and religious lives of the Tibetan and Nepali people.

Kathmandu
Kathmandu’s Durbar Square and the Swayambhunath spire are the first places to visit in Kathmandu, and are spectacular at any time of year. The golden spire looks down on the city from atop its hill, while the Royal Palace is the place to go for many important Nepalese ceremonies. Patan City also has a Durbar Square, or Royal Palace Square, and this UNESCO site is packed with dozens of temples that surround the palace. You will also see the Pashupatinath Temple, on the banks of the Baghmati River. One of the famous UNESCO sites, the sunset over the temple roofs is spectacular. 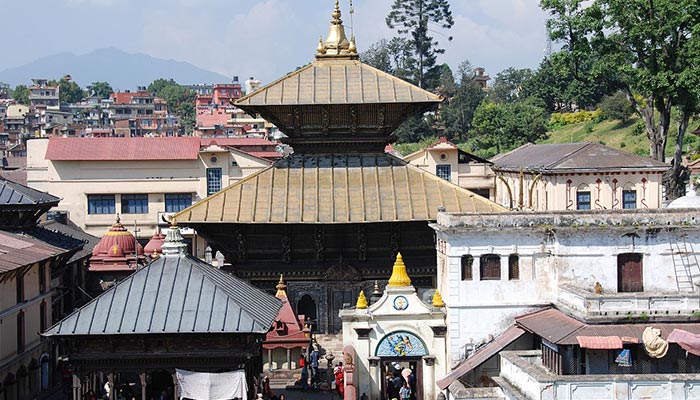 Another great place to see is Boudhanath, located on the ancient trade route. It is a place of meditation and part of the spiritual journey around Kathmandu. With one of the largest stupas in the world, it has been the site of many Tibetan prayers over the centuries. Bhaktapur Durbar Square is the last place to visit in Nepal, with its pagoda and shikhara temples strewn around the royal palace. The square really highlights the ancient building arts of Nepal.

Lhasa
After touring Kathmandu, you will fly across the Himalayas to Lhasa, the capital of Tibet, for your immersion into the life and culture of this mystical land. Once in Lhasa, you will have the chance to visit the two most revered temples in Tibet, Jokhang Temple and Potala Palace, both UNESCO sites, and walk around the famous Barkhor Street, the kora route for Buddhist pilgrims, who come there to walk in prayer around Jokhang Temple to gain merits in their spiritual journey. 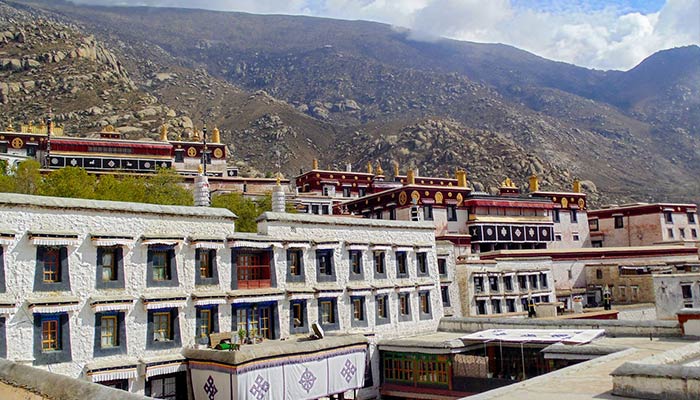 Sera and Drepung Monasteries are also included, and both monasteries are part of the “Great Three” temples of the Gelug Sect of Tibetan Buddhism, the most prevalent branch of Buddhism in Tibet. Dating back to the 15th century, these monasteries are still used today, and are schools for the monks who train there. Sera also has a debating field, where you can watch the monks in their expressive debates on Buddhist philosophy.

All three of these tours include some of the best parts of Nepal and Tibet combined, and will make two beautiful places into one amazing vacation, which will stay in your memories forever.