The Best Way to Get from Lhasa to Kathmandu – Overland or by Air?

The Lhasa to Kathmandu route is one of the most popular travel routes for tourists visiting Tibet and neighboring Nepal. At present, there are two main ways to get from Lhasa to Kathmandu - by flight and overland. For traveling overland, there are two options for tourists. You may get to Kathmandu by a vehicle provided by our travel agency or by a commuter bus. Both offer scenic rides and give tourists a chance to see striking landscapes along the way, which makes the Lhasa-Kathmandu tour one of the highlights of a trip to Tibet and Nepal.

Lhasa to Kathmandu Overland by Vehicle

The linear distance from Lhasa to Kathmandu is 609km, while the overland distance is around 1,300km. The 1300km long Friendship Highway is a scenic road connecting Lhasa and Kathmandu, the capital cities of Tibet and Nepal. In recent years, foreign travelers became particularly fond of this route. During the 7-day tour by our 4WD vehicle, you will admire panoramic views along the road, make stops to sightsee the most important monasteries in central Tibet, and see the world's highest peaks. Paved with asphalt all the way, the road between Lhasa and Kathmandu makes for an easy drive.

Why Travel Overland from Lhasa to Kathmandu?

During the Lhasa-Kathmandu road trip, you will have a pleasure to enjoy Tibetan hospitality, see historic monasteries priding on exceptional artwork, and marvel at the wonders of nature such as scenic lakes, sky-soaring mountains, and lush forests. To make the most of the overland tour of Tibet and Nepal, ensure that you are in an average shape at the very least. The road trip caters to adventurers, history buffs, passionate photographers, admirers of nature, and fans of art and culture in particular.

While you are in Lhasa, don't miss the imposing Potala Palace, the multi-styled Jokhang Temple, and Barkhor Street. Visits to Drepung and Sera, two of "the three great monasteries" of Tibet are also in the itinerary. Yamdrok, or Heavenly Lake, whose calm waters reflect the surrounding mountains while herds of yaks roam about, is another highlight of the Tibet-Nepal overland tour. Tashilhunpo Monastery, founded by the first Dalai Lama and displaying a big gilded statue of Buddha, is the top attraction of Shigatse, the second largest Tibetan city. 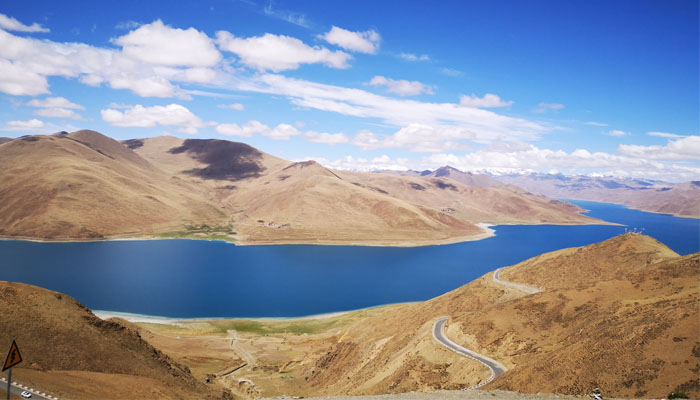 Yamdrok Lake, a highlight of the Tibet-Nepal overland tour.

From the Everest Base Camp, you will benefit from unobstructed views of the world's highest mountain and have a chance to visit Rongbuk, the world's highest monastery. Before entering Nepal, you can visit Gyirong, a town in a valley surrounded by mountains and featuring verdant greenery. When you arrive in Kathmandu, the capital of Nepal, don't miss the Buddhist complexes of Swayambhunath and Boudhanath.

Day by Day Route of Lhasa to Kathmandu Overland Tour

If interested, join a small-group tour operated by our travel agency. What follows is the most classic and popular Lhasa to Kathmandu overland tour and its specific itinerary:

Upon your arrival, our local guide will greet you at the airport or train station. To wish you good luck, the guide will present a traditional Tibetan White Scarf to you. Next, you will board the coach that will transfer you to your hotel. Along the way, you will enjoy the views of the spectacular Tibetan scenery and typical local villages.

On this day, our friendly travel guide will take you to sightsee the main landmarks and scenic spots in Lhasa, including the Potala Palace, Jokhang Temple, and Barkhor Street.

Day 3: Visit the monasteries of Drepung and Sera

In the morning of the third day of your Tibet to Nepal overland tour, you will visit the Drepung Monastery. Inhabited by more than 10,000 monks that often engage themselves in Buddhist debates, this monastery is the largest of the Tibetan monasteries. In the afternoon, we take you to the Sera Monastery, the famous "court of wild rose." During the creation of the monastery in 1419, the nearby hill abounded with roses in bloom. Ever since the completion of the Sera Monastery, it has always been a significant Buddhist seminary. A short hike to the nearby valley that reveals beautiful scenery with a picnic there is part of the experience.

On the 4th day, we travel to Lake Yamdrok, one of the three holy lakes in Tibet and the largest habitat of waterfowls in South Tibet. There, you can take a short hike along the tranquil water. In the afternoon, we drive about 90 kilometers to Shigatse, the second largest city in Tibet and the traditional capital of the Tsang. In Shigatse, you’ll visit the Tashilhunpo Monastery, the seat of the Panchen Lama, the second highest Tibetan incarnation.

We continue to drive westwards along the Friendship highway to the Rongbuk monastery. Along the way, we relish the magnificent scenery. The road to Mount Everest diverts off the newly-paved Friendship highway near the town of Shegar, turning into a rough, gravel trail. From this point, we have to travel around 90km to get to the Rongbuk Monastery. Weather permitting, you can glimpse four mountains that are over 8,000m high. These are Mount Lhotse (8,516m), Mount Everest (8,848m), Mount Qowowuyag (8,201m), and Mount Mayalu (8,463m).

We get up early to experience the sunrise over the Himalayas. If you wish, we will help you arrive at the Everest Base Camp for sightseeing. If you prefer, take a hike to the base camp. After visiting the base camp, visit the Rongbuk Monastery, the highest monastery in the world (5,000m). Then, we drive to Old Tingri to enjoy the beauty of the whole Himalaya range.

Since the 2015 earthquake has destroyed the Zhangmu border crossing, Gyirong Port is the only border crossing between Nepal and Tibet from then on. On your way from Old Tingri to Gyirong Town, you will traverse the region that offers views of various Himalayan peaks. A short drive to the south takes you to Gyirong Port, the international border crossing some 160km away from Kathmandu.

Lhasa to Kathmandu by Air

Currently, tourists can take direct flights from Lhasa to Kathmandu and vice versa by Sichuan Airlines and Air China. China Eastern Airlines and China Southern Airlines operate on this route, too. The flight distance between Lhasa and Kathmandu is around 600km, and the average duration of the flight is 1:30 hours. Departing frequency is one flight a day in each direction. 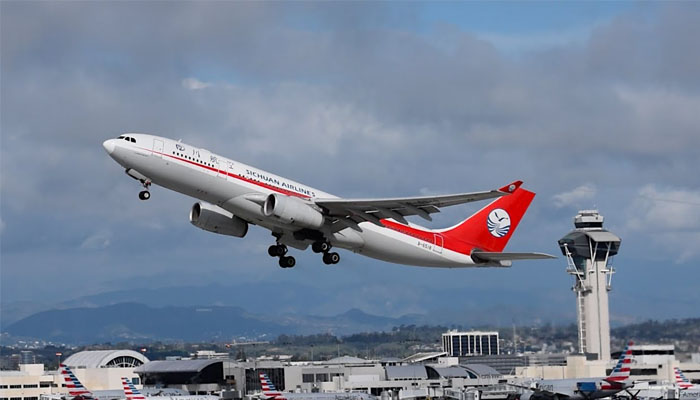 Sichuan Airline has flight to Kathmandu every other day

Direct flights between Kathmandu and Lhasa save you time. Note, however, that you are likely to experience the symptoms of high-altitude sickness once you land at the Lhasa Airport. For that reason, it is always better to travel to Lhasa by land, and out of Lhasa by air. Therefore, flying from Kathmandu to Lhasa is more suitable when you have little time or have spent some time recently at high altitudes.

Because of the limited number of seats on the plane, the airline fares are high. Furthermore, they become higher during the Chinese National Holiday and the Chinese Spring Festival. Non-direct flights with stops in Chengdu and Kunming last longer and cost more.

Other Ways to Travel from Lhasa to Kathmandu

Depending on your habits, stamina, and available time, you can tour Tibet and Nepal by bike, bus, and, to some extent, by train.

Lhasa to Kathmandu by Bicycle

The Lhasa-Kathmandu bike route largely overlaps the overland tour of Tibet and Nepal. The distance is around 1,100km, and you should take it only if you are in great shape.

Beginning in Lhasa, the first stage of the route introduces Yamdrok Lake, Karola Glacier, and the town of Gyantse before it concludes in Shigatse. Before you arrive in Shigatse, visit the Palcho Monastery where different factions of Tibetan Buddhism coexist in harmony. In Shigatse, don't miss the Tashilhunpo Monastery, the seat of Panchen Lama that is the high Tibetan authority second only to the Dalai Lama. 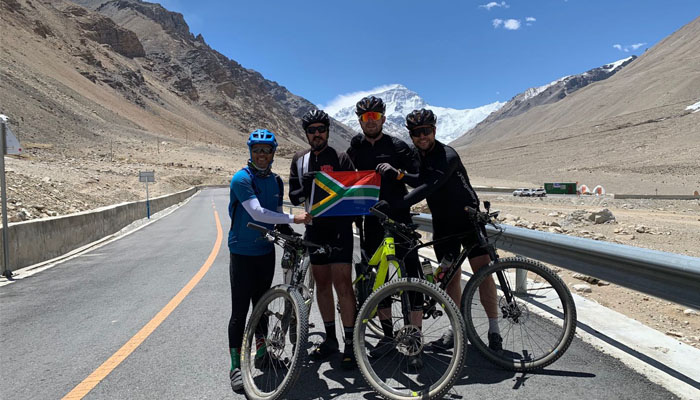 Cycling to Everest Base Camp during the trip from Lhasa to Kathmandu.

The next section of the route takes you through several mountain passes and concludes at the Rongbuk, the highest monastery in the world. Everest Base Camp, from where you can relish views of Mount Everest, is near the monastery. The third stage of the cycling tour takes you to Old Tingri, one of the best places in the Himalayas for observing numerous mountain peaks. By the end of this section, you will arrive in the Gyirong town, which is about 25km away from the border of Tibet and Nepal. Once you enter Nepal, cycle with care since the traffic is heavy all the way to Kathmandu.

Lhasa to Kathmandu by Bus

There once was direct international bus running between Lhasa and Kathmandu via Zhangmu Port. The bus departs twice a week in the peak season and once a week in the low season. The buses depart from the Liuwu Bus Station in Lhasa. The journey generally lasts two and a half days and costs RMB580 (around US$85). After earthquake, the buses were canceled. Currently, tourists can book the driving service from local travel agency like us, or book a car service to Gyirong Port. After crossing the Tibet-Nepal border, you can take a bus to Kathmandu.

Lhasa to Kathmandu by Train

At present, there is no direct railway linking Lhasa and Kathmandu. However, the construction of the railway is currently under way. The first extension of the Qinghai-Tibet Railway, which runs from Lhasa to Shigatse, is fully operational. The next phase, which should connect Shigatse to Gyirong, should be ready in the near future. Once this section of the railway is ready, the final extension, which should connect Gyirong and Kathmandu, will commence. The duration of the journey from Lhasa to Shigatse is less than three hours. The one-way ticket costs between US$15 and US$25 in the local currency.

You can travel between Lhasa and Kathmandu in several ways depending on your habits, budget, and physical capacities. Traveling overland introduces various top attractions of Tibet, marvelous scenery, and the cultural legacy of the Tibetans. If the speed of traveling is essential, traveling between the Lhasa and Kathmandu by air is the best option. Given that you can afford a few-day journey and wish to save money, travel by bus or combine bus and train.

Travelers flying to Lhasa are likely to experience symptoms of high-altitude sickness upon landing. To minimize the effects and recover quickly, have a good rest when you arrive, don't rush to visit attractions, and don't eat much. Furthermore, don't smoke and drink alcohol, and avoid frequent baths to avoid catching a cold. Finally, drink a lot of water and eat chocolate and other high-calorie food since the loss of fluids and energy accompanies the acclimatization process.

Read More about The Best Way to Get from Lhasa to Kathmandu – Overland or by Air?

Be the First One to Comment "The Best Way to Get from Lhasa to Kathmandu – Overland or by Air?"