When is the Best Time to Visit Tibet and Bhutan?

Lying next door to each other in the Himalayas, Tibet and Bhutan are two major tourist destinations in this part of Asia that are often visited together on a combined tour. Similar in only a few aspects of their religions, these unique destinations are two of the topmost exclusive locations in the world. For anyone planning a visit, it is useful to know what time of year is best to visit both destinations together.

Weather Conditions of Tibet and Bhutan

Tibet and Bhutan may be neighbors, but they share little similarity in their climates and weather conditions. Tibet is a typical high-altitude plateau climate with four seasons, while Bhutan has a milder four-season alpine-type climate.

The main climate similarity of these two destinations is the monsoon season, which occurs in both locations in the summer months, from June to August. Tibet has a harsher winter than Bhutan, with the higher altitude bringing in colder weather, where temperatures across the region’s higher elevations is regularly well below freezing. Tibet does not always see that much snow in winter, though, and even in the coldest months, a light dusting is all you see in much of the region. Snowfall is heaviest in the more remote areas, such as Ngari and Nagqu. Bhutan does have snow in the colder months as well, but it is mainly concentrated in the higher mountain elevations to the north, with little falling in the populated valleys. 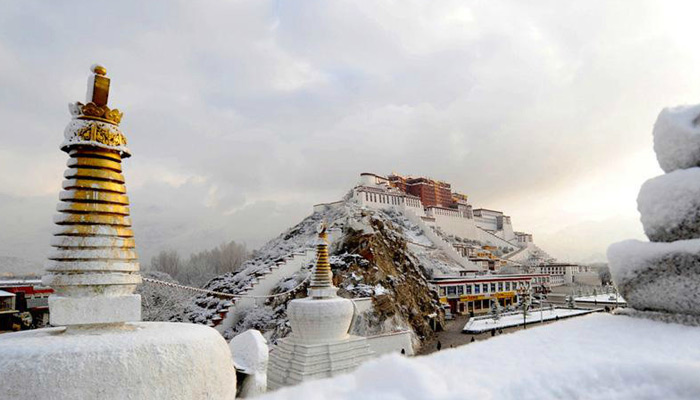 Spring and autumn are both dry and pleasant months in both Bhutan and Tibet, with clear skies, almost no rain, and temperatures that are more amiable for tourists. Both destinations also have summer monsoon seasons, when the rain caused by the Southwest Monsoon from India moves up across the Himalayas. However, whereas Bhutan can see much more rain in the lower areas of the country, Tibet sees very little rain outside the eastern prefectures. This is due to the shadow-effect of the Himalayas draining the rain clouds as they cross the mountains.

Best Time to Visit Tibet and Bhutan – Spring and Autumn

While you can visit both Tibet and Bhutan throughout the year, Spring and Autumn are the best times for a combined tour to both destinations. It will be better for tourists to plan a visit to Tibet and Bhutan during these times considering the weather conditions of each. Best time to visit Tibet

The best time to visit Tibet is generally from April to November, which covers the period from spring through summer to autumn. Summer may be the monsoon in Tibet, but with little rain to show for it, it is also the peak season for Tibetan tourism. Temperatures are warm to hot, and the skies are mostly clear, except when it is about to rain. And with the rain coming generally in the late afternoons and evening, or even overnight, the monsoon normally has little effect on tours in the summer months. 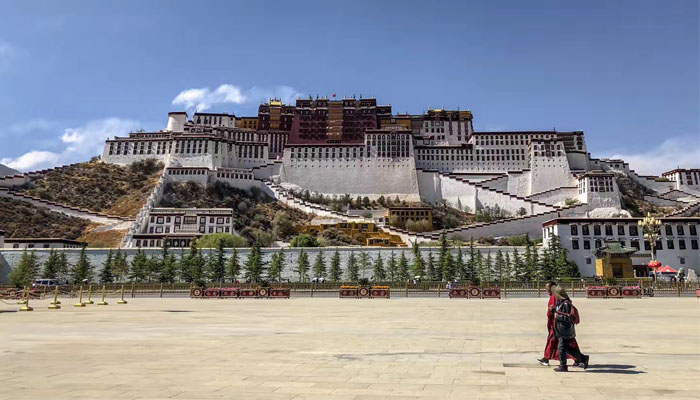 Spring is the best season to visit Tibet

Spring and autumn in Tibet are good times to visit, with dry weather and clear skies, and while it can get cold at night, the days are normally quite warm. Even the winter months are still viable for tours, with milder winters in the central and eastern areas of Tibet. The coldest areas of the north and northwest are generally avoided at this time, though, due to heavy snow and intense cold. Best time to visit Bhutan

Generally, the best time to visit Bhutan is in the spring and autumn, when the weather is at its best for tourism. The climate at these times is generally dry and warm, with almost no rain and clear skies. The sun shines brightly for both seasons, and allows for better travel across the kingdom. 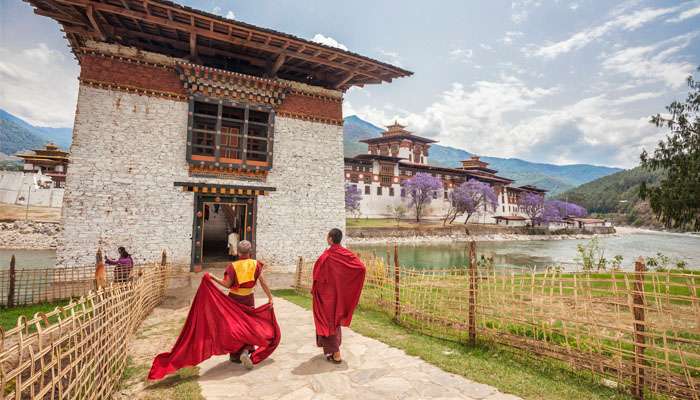 Winter and summer are open for tourism in Bhutan, though you cannot always guarantee the weather will be promising. Summer showers can turn quickly to torrential downpours, especially in the lower areas, though the mountains see a lot less rain. However, it can make is wet enough to make travel dangerous and uncomfortable. Winter can be cold in the highest areas of the country, though in the lower valleys and the southern areas, the winters are mild, with a few areas of the most popular tourist destinations barely seeing temperatures below freezing.

Best Time to Visit Tibet and Bhutan for Trekking

Tibet and Bhutan share some of the world’s most outstanding trekking trails, and hiking in the Himalayas is one of the ultimate trekking experiences in the world. These two fantastic destinations also share the same seasons for trekking, in spring and autumn. From March to May and late September to early November, the hiking in both Bhutan and Tibet is at its very best. 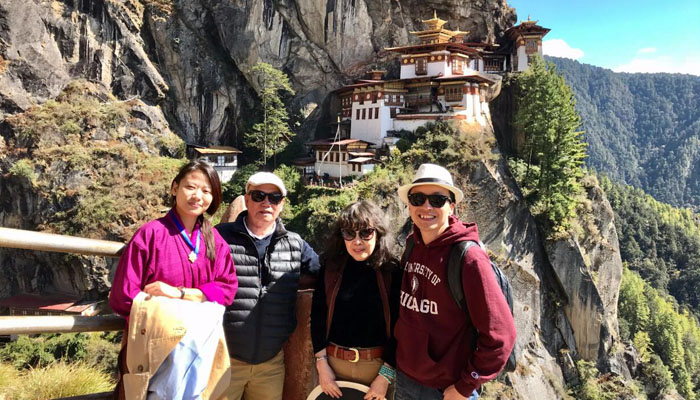 Hiking is best done in times when the weather is dry, as rains are not a good idea for hiking through Himalayan Mountains. Both spring and autumn are dry and clear times of the year, and are when the weather is warm and pleasant, rather than cold or too hot. Trekking can be done comfortably in spring and autumn, without the need for heavy clothing and in a climate that is bright and sunny, yet warm and pleasant.

Best Time to Visit Tibet and Bhutan for Festival Experience

Buddhist festivals are a major part of both Tibetan and Bhutanese cultures, and you can find festivals in both Tibet and Bhutan in every single month of the year. As some of the most important events in the Buddhist calendars of both destinations, festivals can usually be seen during tours of Tibet and Bhutan throughout the year. 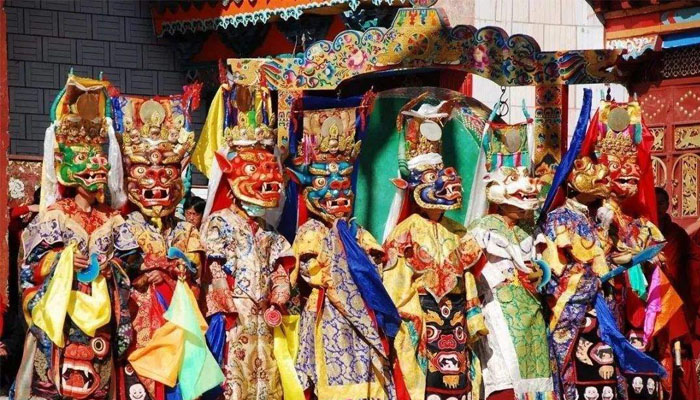 For Tibet, the main festival period normally comes in the summer months, from late in May until around the end of September. The main focus of the festivals are usually in July and August, which, although it is the monsoon season, is the ideal time of year to take a Tibet festival tour. 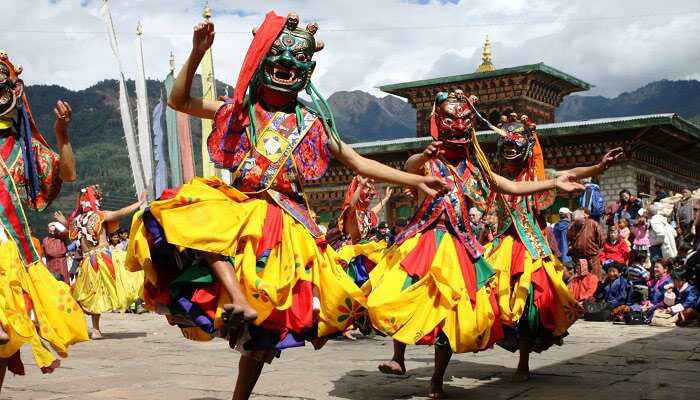 Festivals in Bhutan are held throughout the year, but the spring and autumn seasons are the best for the renowned festivals of Bhutan. The major festivals in the kingdom are known as Tsechus, and are held in at least one place in every month of the year, with the bulk of these religious celebrations of the life of Guru Rinpoche being held throughout March and from late September to the end of October.

Best Time to Visit Tibet and Bhutan for Lower Cost

While Tibet may have its peak season in the summer months, in Bhutan this is one of the two low seasons, and one of the times when it is possible to spend time in the kingdom for a lower cost. However, rains can be troublesome and limit your travel. 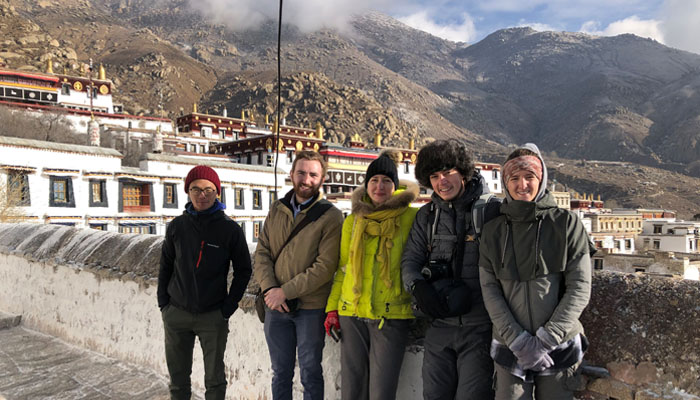 Winter is the low season for both Tibet and Bhutan, and from December to February in Bhutan and November to March in Tibet, the low season makes an excellent time to travel for those looking for a more cost-effective trip. While the temperatures may not be as warm as you might like, the winter months in both Bhutan and Tibet can be pleasant, and with fewer tourists crowding around the attractions, it can be a more peaceful time of year to travel.

Dressing Tips for a Tibet and Bhutan Tour

What to wear in Tibet and Bhutan mainly depends on the time of year you are traveling. In the summer months, you can get away with lighter clothing, including t-shirts and light slacks. Sturdy shoes or boots are still necessary, as the ground can be rough and rocky, and you should bring a hat to protect your head from the sun. However, refrain from wearing off-shoulder clothes, shorts, and short skirts in these two devout Buddhist destinations, as you will not be permitted to enter temples and monasteries if you are not appropriately dressed.

In winter, you will need to have more warm clothing, as the weather can get very cold, especially in the higher altitudes around the mountain regions. Warm sweaters, long underwear, warm jackets, and thick socks with thick long pants are the order of the day in winter. And you will need a warm hat to keep the heat from escaping through your head, and gloves for your hands, to stop your fingers from getting numb.

Spring and autumn are the pleasant times of year, when you will need a mix of warn sweaters for the evenings and lighter clothes during the warmer days. Sunglasses are an item of necessity throughout the year, as the sun is always bright at higher altitudes. You may need to add a decent warm jacket for the later evenings, as the night can still get cold, and bring both warm and protective hats, as the sun is just as bright and harmful in spring and autumn as in summer and winter.

When planning a Tibet Bhutan tour, it is important to know the best time to travel. This really depends on what you are looking for in your trip. Generally, the best times are spring and autumn, when the weather is at the optimum for both destinations, and you can enjoy the visit to the Roof of the World and the Land of the Thunder Dragon at the same time.

Be the First One to Comment "When is the Best Time to Visit Tibet and Bhutan?"