Trekking in Tibet is completely different from trekking in the neighboring countries of Nepal and Bhutan, and has some of the world’s best high-altitude treks in the world. Moreover, Tibet has amazing landscapes, stunning scenery, and awesome mountain vistas that you cannot find anywhere else on the planet.

And with the unique Tibetan culture behind it all, a trek in Tibet is more than just a hike through the mountains. There are a huge number of options for trekking in Tibet, from short day-long hikes around the local hills of Lhasa to the most demanding and grueling trek on the plateau. So to whet your appetite for a great trek in Tibet, here are the top six trekking routes on the Roof of the World.

Renowned as the best short trekking route in Tibet, the 2-day hike from Shalu Monastery to Nartang Monastery covers a distance of just 45 kilometers, and for those that want to take it easy, the trek can be extended to 3 days by reducing the amount of daily trekking. The trek starts at the Shalu Monastery, not far outside Gyantse and just to the southwest of Shigatse, at around 3,980 meters above sea level. 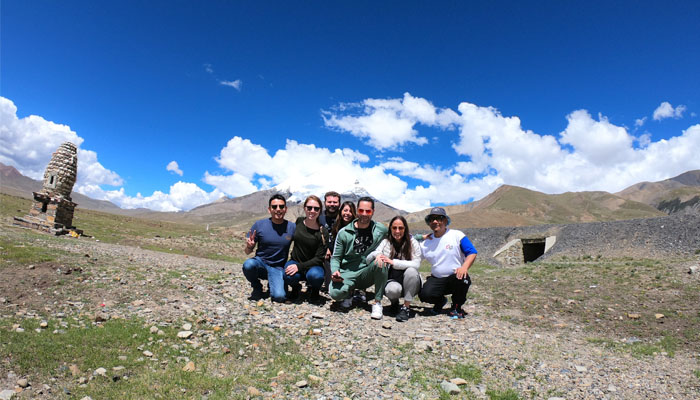 Shalu to Nartang Monastery trek is a short trek suitable for beginners.

The trek is not considered to be a hard hike, and is suitable for even beginners to high altitude trekking, which makes it an idea starter trek in Tibet. The route of the trek heads out from Shalu and moves southwest, stopping first in Upper Lungsang (4,060m), before heading on to Ngor Monastery, with its rare Sanskrit library of Buddhist scriptures. The route heads over the Char-La Pass (4,550m), and after resting the night, continues on to Nartang.

Located to the west of Shigatse, Nartang Monastery sits at an altitude of around 5,000 meters, and the route to get there passes through several small local villages. While the trek is not that hard, there are a couple of tough climbs that novices may find a little more demanding.

The route from Tsurphu Monastery to Yangpachen, the location of one of Tibet’s most popular hot springs, is one that has been well-established for many years. Listed as one of China’s top 20 classic trekking routes, this 4-day trek is an amazing experience and a unique opportunity to explore the beautiful area north of Lhasa on foot. 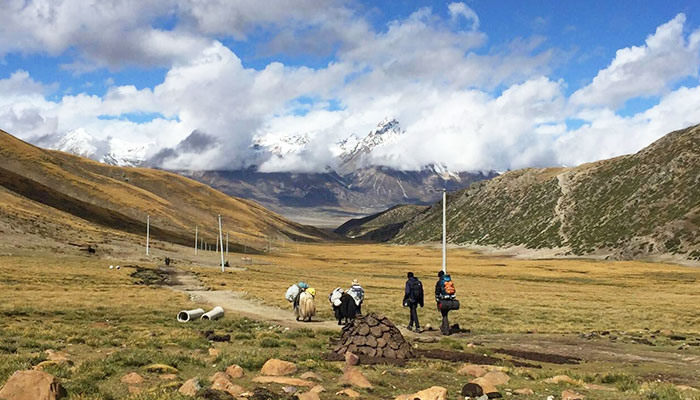 Tsurphu Monastery to Yangpachen Trek can take you to explore the beautiful northern Lhasa.

Located at an altitude of around 4,300 meters, Tsurphu Monastery lies around 70km from Lhasa, and the trek starts heading north, crossing several high plateau valleys along the route. Crossing the severe alpine tundra of the plateau, the trek passes through Leten (5,090m) and Tangba (4,950m), before reaching the Dorje Ling nunnery (4,460m), and finally ending at the Yangpachen Monastery.

The trek is a moderate to hard trek, and is relatively demanding, rising to altitudes above 5,400 meters at the highest points of the passes. Most treks do tend to end at the Dorje Ling Nunnery, but for those with a real sense of adventure, the continuation on to Yangpachen is a real achievement. And you can really feel you deserve the dip in the Yangpachen Hot Springs close by the monastery at the end of the hike.

The beautiful trek from Ganden Monastery to Samye Monastery is rated as the most popular short trek in Tibet, and takes around 4-5 days, depending on how fast you want to hike the trail. A fulfilling religious pilgrimage between two of Tibet’s most famous monasteries, this hike takes you through the beautiful plateau landscapes, with snow-capped mountains, crystal-clear blue lakes, and verdant alpine meadows, complete with herders and yaks grazing on the lush grass. 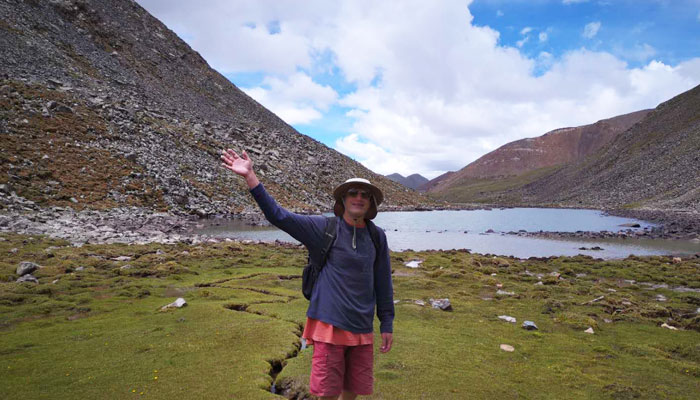 Enjoying gorgeous valley during the trek from Ganden to Samye.

Ganden Monastery, at an altitude of 4,180 meters, lies in the south of the capital of Lhasa, and is the primary monastery of the Gelug School of Tibetan Buddhism. The trek is not one that is particularly difficult, though it does reach altitudes of more than 5,200 meters, when crossing the Shogu La Pass. This high ascent is what makes the trek challenging, and does require some experience in high-altitude trekking.

One of the major highlights of the route is the fact that you will trek through the Gyama Valley on the way to Samye, which is the birthplace of the 33rd Tibetan king, Songtsen Gampo. The end of the trek, Samye Monastery (3,556m), is the oldest and first Buddhist monastery in Tibet, and stands majestic on the hill overlooking the Yarlung Tsangpo River. The site also hosts the Chim-puk Hermitage close by, which is well worth visiting at the end of the hike.

One of the most expansive treks in Tibet, the hike from Damxung to Lake Namtso, crossing the high Nyenchen Tanglha Mountain Range, is a long and arduous trek that covers around 160 kilometers. The trek can take from seven to ten days, depending on how fast you want to hike, though it is often better to take longer, to get a better view of the surrounding countryside without having to rush to the next campsite.

The Namtso Lake Trek ends at the heavenly lake which is brilliantly beautiful.

Starting at Damxung, to the north of Lhasa, at an altitude of 4,130 meters, the trek takes you up into the Nyenchen Tanglha Mountain, through meadows and valleys, and past a small local monastery. Stopping in herder’s camps along the way, and camping in lush green meadows, the hike is one of the best ways to explore the landscape in the north of Tibet. At the highest point of the hike, the Kyang La Pass through the mountains, you will reach an altitude of 5,330 meters, rising more than 1,200 meters from Damxung.

The trek ends at Lake Namtso, known as the Heavenly Lake, at an altitude of 4,718 meters. Lying on the edge of the vast Changtang Grasslands of northern Tibet, the lake is one of the Great Three Sacred lakes of Tibet, and the end of the trek is at the beautiful Tashi Dorje Monastery on the small peninsula that sticks out into the lake.

Possibly the most demanding trek in Tibet, the famous Kailash Kora Trek is not for the faint-hearted, and is a hike that should not be done by inexperienced trekkers in high altitudes. Starting from the small village of Darchen (4,560m), below the southern face of the sacred mountain, this amazing yet grueling trek is rated as the hardest trek in Tibet, and one of the most spiritual. Visited by pilgrims from Tibet, Nepal, and India, the 52km hike around the mountain’s kora route takes you up to elevations as high as 5,630 meters, at the Dolma La Pass. 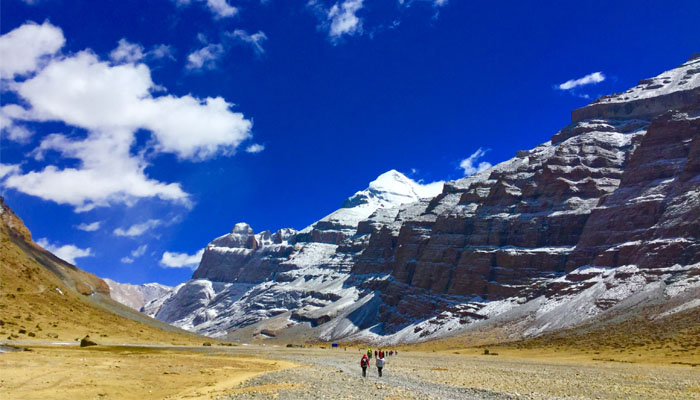 It is a sacred thing to do the Kailash Kora trek.

Passing by three sacred monasteries, the hike follows the valleys around the world’s most sacred mountain, far out in the west of Tibet, more than 1,000 kilometers from Lhasa. You will also stay at two of the three monasteries, in their guesthouses or camp sites, including Drirapuk (5,080m) and Dzultripuk (4,790m), for the two nights of the hike.

Taking three days to complete the trek, the route passes by the Chuku Monastery (4,820m) first, a sacred Sky Burial Site (which you cannot actually trek to), the beauty of the views and billowing prayer flags at the Dolma La Pass, the stunning Tuoji Lake on the route down from the pass, and the lush green valley through which the latter part of the trek follows.

Lying below the eastern slopes of Mount Everest, the Gama Valley is one of the most stunning valley areas in the world, and is a stark contrast to the desolate flanks of the world’s highest mountain. Stretching out for around 55 kilometers from end to end, the valley boasts a varied ecological climate, from evergreens and semi-evergreen trees at the higher altitudes to deciduous and even primeval forests in the lower end of the valley. A vast area of the valley is actually covered by a juniper forest, and trekking through this amazing valley feels like being lost in a time where technology did not exist. 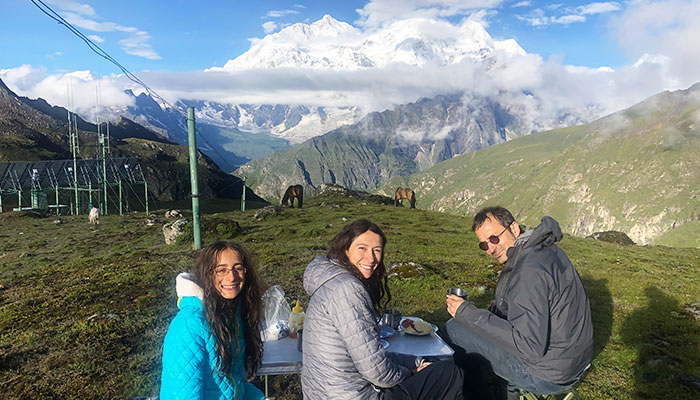 Dining at the scenic camping site of our Gama Valley Trek in Tibet.

One of the top ten trekking areas in the world, a hike through this beautiful valley is an epic adventure that can last anywhere from 10-15 days, depending on where your trekking tour takes you. With altitudes ranging from 4,000 meters to as high as 5,300 meters, this is one of the highest treks in the world, hiking through dense forests, beautiful flower-dotted meadows, and following small bubbling streams that often disappear underground suddenly.

While the trek is not a hard or arduous hike through the valley, it is classed as a moderate trek, suitable for hikers with an average level of fitness, and not suitable for kids under 12-13 years old. Aside from the stunning landscapes and amazing scenery, you also get a great view of some of the world’s highest mountains, including Mount Everest, Mount Lhotse (4th highest), and Mount Makalu (5th highest).

Trekking in Tibet is one of the most amazing experiences in the world, hiking through some of the most spectacular landscapes and scenery in the world on the world’s highest plateau. With a huge number of treks to choose from, from the easy day hikes to some of the hardest and highest treks in the world, avid trekkers are spoilt for choice in Tibet. And if you want to customize your tours and treks to make them more exciting, then we can make those arrangements to give you he outstanding vacation you want, traveling around the Roof of the World.

Be the First One to Comment "Best Trekking in Tibet: Top 6 Classic Trekking Routes in Tibet"