Known as the Roof of the World, Tibet is a land of snowy mountains, ringed by the immense Himalaya Mountain Range and crisscrossed by the many ranges of the Transhimalaya. Many of the mountain in Tibet are challenges for mountaineers always looking to tackle that next big climb. Once shrouded in mystery and beyond the reach of ardent mountaineers, Tibet is now one of the most outstanding places in the world for climbing high mountains. With several of the world’s highest mountains over 8,000 meters being accessible from Tibet, this high-altitude plateau is one of the best places for mountaineering on these lofty peaks.

Aside from the fact that eight of the world’s highest mountains are either partly or wholly in Tibet (Shishapangma is the only mountain over 8,000 meters that lies wholly in Tibet), the region is home to a number of famous mountains, several of which are some of the best mountains in the world for climbing.

The world’s highest mountain lies on the border with Nepal, and stands 8,848 meters above sea level. Straddling the Sino-Nepal border, the mountain is located in the Khumbu Region in Nepal and in Tingri County of Shigatse Prefecture in Tibet. Mount Everest, known in Nepal as Sagarmatha and in Tibet as Chomolungma, is rated as the pinnacle of mountaineering, and sees thousands of climbers heading for its summit every year on the Nepal side. In Tibet, the numbers of climbers scaling the mountain are fewer, as restrictions are greater to ensure better safety and quality of climbing. 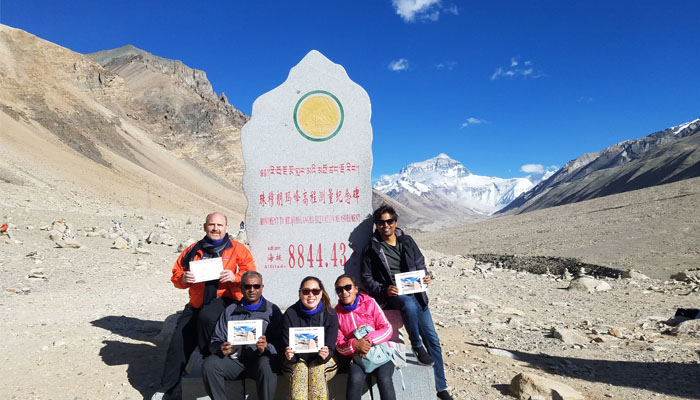 Everest Base Camp in Tibetan Side

The first attempt, in 1921, reached to only 7,000 meters, and in 1922, the first climbers to reach more than 8,000 meters made it over the North Col to a height of 8,320 meters. The first official summiting of the mountain was made on May 29, 1953, by Edmund Hillary and Tenzing Norgay, over the South Col route from Nepal. Since then, more than 10,000 successful summits have been made, by more than 8,000 climbers from around the world.

Known in Tibet as Gang Rinpoche, Mount Kailash is considered to be the most sacred mountain in the world. Held in reverence by four religions – Buddhism, Hinduism, Jainism, and Bon – this relatively small mountain is the highest peak in the Gangdise Range of the Transhimalaya in Tibet. 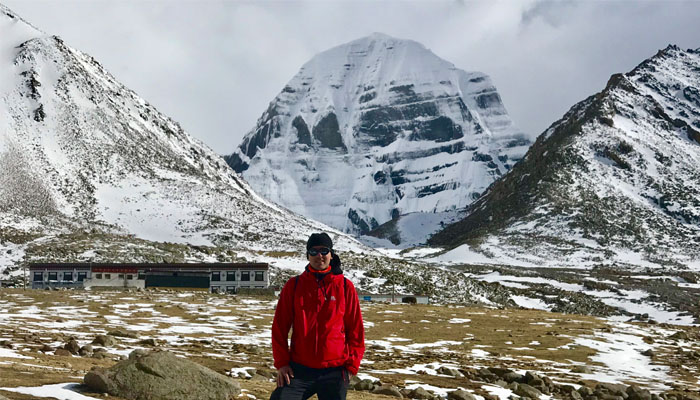 Mount Kailash is the most sacred mountain revered by Tibetan Buddshim and other three religions.

The mountain is located in western Tibet, in Ngari Prefecture, close to the border with India and Nepal, and lies close to the sources of four of the world’s longest rivers. Standing just 6,638 meters above sea level, this pyramid-shaped mass of black rock can be clearly seen for miles in any direction, standing tall against the lower mountains in the Gangdise Range.

However, despite it being a famous mountain in Tibet, this stunning peak has never felt the tread of mortal feet, and is protected in China with a special religious status that means it cannot be climbed. The mountain was first studied in 1926, but no attempt was made to climb it due to time and weather constraints. In the 1980s, Reinhold Messner declined an invitation to climb the peak, and in 2002, the Chinese government stated that all climbing activities on Mount Kailash were prohibited.

Officially known as Nyainqêntanglha Feng, Mount Nyenchen Tanglha is the highest peak in the Nyenchen Tanglha Mountain Range of the Transhimalaya in Tibet. Standing at 7,162 meters above sea level, the mountain is located in the western end of the range, in Damxung County of Lhasa, to the south of Lake Namtso.

Mount Nyenchen Tanglha is the highest peak in northern Tibet.

The 6th highest mountain in the world at 8,188 meters above sea level, Mount Cho Oyu lies around 20km to the west of Mount Everest in the Khumbu section of the Mahalangur Himalaya. The first attempt to climb Cho Oyu was made in 1952 by a British team, but the ice cliff, a danger of avalanches, and other factors, ended the climb at just 6,650 meters. In October 1954, an expedition from Austria was permitted to climb the north-west ridge route, and made Cho Oyu the fifth 8,000 meter peak to be climbed. 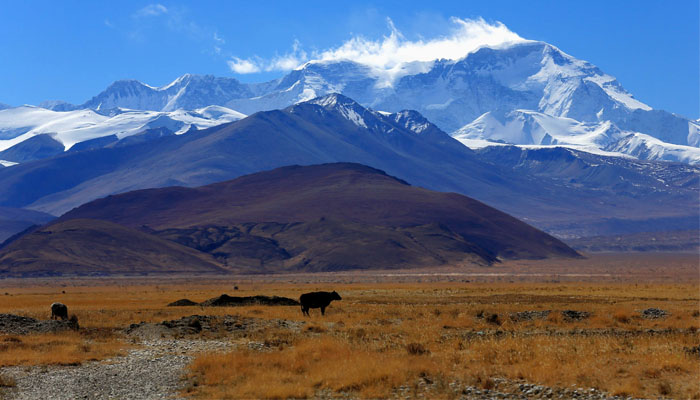 Mount Cho Oyu lies around 20km to the west of Mount Everest.

The mountain is now considered to be the easiest of the 8,000 meter mountains, and is the second most climbed peak after Mount Everest. Often called the “trekking peak” because of the easy climb to the summit from the northwest ridge, it is often used as a training peak and as a high-altitude climb for mountaineers without much experience.

Standing 7,782 meters above sea level, Namche Barwa lies in a very isolated area of Tibet that rarely sees foreign visitors, in Mainling County of Nyingchi Prefecture. The mountain stands on the Great Bend of the Yarlung Tsangpo River, where the river enters the famous Yarlung Tsangpo River Gorge, the deepest and longest gorge in the world. 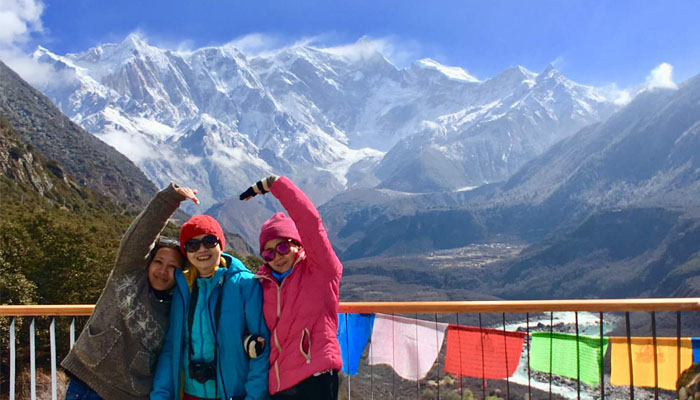 Namche Barwa is a landmark to visit in Nyingchi.

First located in 1912 by British surveyors, the mountain remained unclimbed for more than 70 years, until the 1980s saw Chinese climbers attempting the grand peak. However, the peak was not reached until 1992, when a Chinese-Japanese expedition conquered the South Ridge to reach the summit on October 30, 1992. Since then, only 11 climbers are recorded as having reached the summit.

What to Prepare for Mount Climbing or Trekking in Tibet

For any trekking or climbing tour of Tibet, there are certain documents that you need in order to enter Tibet, get to the mountain r area for your climb or trek, and have the correct permits to trek and climb in Tibet.

For all tours to Tibet, you will need to have the following documents:
Tibet Travel Permit – This is required for entry to Tibet and to travel around in the area of Lhasa.
Alien’s Travel Permit - Required for travel to the “unopened” areas of Tibet outside Lhasa, including Shigatse.
Restricted Areas Permit - This is often called the “Military Permit”, and is required for travel to military-sensitive areas such as Ngari, Nyingchi, etc.
Frontier Pass - While most tours will not actually cross the border out of China, the Frontier Pass is required for all tourists traveling in the areas of the Chinese border with India, Nepal, and Bhutan, which includes Mount Everest and Mount Kailash.

In Addition, for all climbs and treks above 6,000 meters, which includes the famous Mount Everest Advanced Base Camp Trek, you will need to apply for a Mountaineering Permit and Trekking Permit from the Tibet Mountaineering Association in Lhasa. This can be obtained by the travel agency once you arrive in Tibet.

For climbing in Tibet, there are a number of things that you will need to bring with you which are not normally needed for the average trek in the region. You need to include the following items in your packing list: 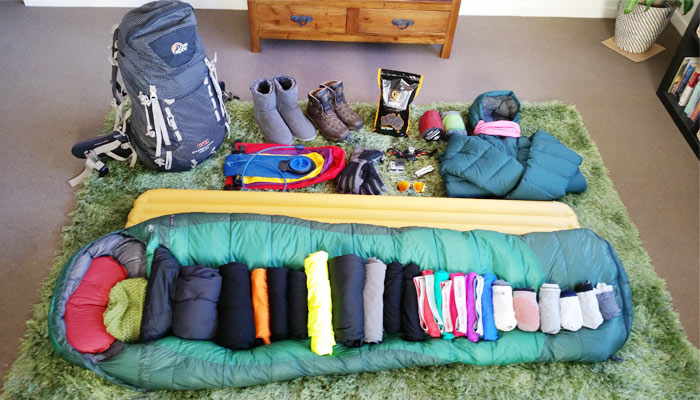 Clothing - Should include heavy down jacket, thermal underwear, woolen layers and vests, woolen trekking socks, thick woolen socks, hiking or climbing pants, trekking boots and climbing boots or crampons, warm woolen hat and scarf, goggles or sunglasses, gloves, wind and rain proof outer layer, and hiking poles or ice axes.
Navigation - A good ordinance survey map in a protective cover is needed, as is a compass and GPS if available.
Sun Protection – Bring lip balm, sun block, moisturizer, and sunglasses to protect against the bright sun.
First Aid - Your first aid kit is up to you, but should include, at a bare minimum, adhesive bandages, gauze pads, sterile pads, adhesive tape, Ibuprofen or another pain-relief medication, safety pins, first-aid manual, elastic wrap, triangular bandages, alcohol, iodine, salt, antiseptic wipes, antibacterial cream, and eye drops. Other additional items are at your discretion.
Camping and Repair Kit - Matches or a lighter for fires, a waterproof container to keep them in, a good knife or multi-tool, duct tape, and fast-drying glue are essential repair items.
Shelter - You will need to bring a good arctic-rated sleeping bag, a climbing tent, and tarp or poncho for wind protection.

Best Time for Mountain Climbing and Trekking in Tibet

Unlike regular trekking in Tibet, which can normally be done from April to the end of October, high-altitude trekking over 6,500 meters and mountaineering has a very limited window of opportunity in order to ensure a safer climb.

April and may are the main months of the year when mountaineering in Tibet is possible, and this is the time when the professional mountaineers take on the higher peaks of Mount Everest and the other 8,000+ meter mountains. From around mid-April to the end of May, the skies are clear enough for mountaineering, with a lower chance of accidents, weaker winds, and no rain.

September and October are also possible times for mountaineering in Tibet, as the weather is generally good, though there is still a chance of rain through September. It is windier in the autumn season, but skies are normally clear and there is no snow to contend with.

One of the most amazing treks in Tibet, the Everest Advance Base Camp (ABC) trek is the world’s highest altitude trek, reaching an elevation of 6,340 meters at the Advance Base Camp. The trek begins at Rongbuk Monastery, and heads through the climbers base camp, Camp I, the Interim Camp, and Camp II to reach the ABC, 1,310 meters above he starting point. The trek follows the same route as the climbers heading for the summit over the North Col. 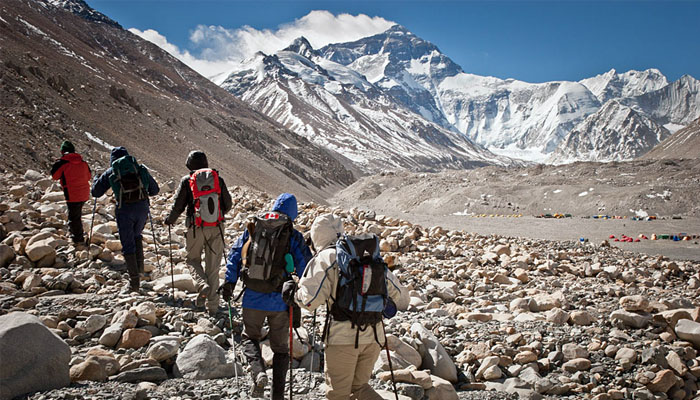 While it may be the easiest of the 8,000 meter mountains in the Himalayas, it is still best not to underestimate this high mountain. There may not be much in the way of technical climbing on Mount Cho Oyu, but it is still physically demanding, and the altitude can play a huge part in the demand on the body when climbing the mountain. The climbing route heads up the eastern side of the mountain, using the less popular Southeast Ridge route, and does require a good amount of experience in mountaineering.

Tibet is an amazing place to begin mountaineering, with several locations that can be used as training climbs, and some of the world’s highest mountains for those that have the experience of climbing to above 8,000 meters. For those with less experience, there are some great treks that you can try, to get a little experience of climbing higher than 5,000 meters, and which are amazing experiences in their own right. Ringed by massive mountains, Tibet is the ideal mountaineer’s paradise.