Tibet is a faraway place from many other destinations, and its overall location, climate, acreage and more may be unfamiliar to many people. Here in this article, our tibet region maps show the location of Tibet in the world and China, the administrative regions of Tibet, the surrounding areas of Tibet etc. Check to get informed about this unique destination.

Where is Tibet Located in the World Map

The land of Tibet makes up the main part of the Qinghai-Tibet Plateau, and is located between 26° and 37° north latitude and 78° and 99° east longitude, covering an area of 1.22 million square kilometers. Qinghai-Tibet Plateau is the world's oldest, largest and highest plateau, and is therefore known as the "roof of the world". There are more than 50 peaks above 7000 meters and 11 snow-capped peaks above 8000 meters, which is why Tibet is also known as an "ocean of mountains".

Map shows the location of Tibet in the world

Where is Tibet Located in China Map

Located in southwest China, Tibet is bordered by Qinghai, Sichuan, Yunnan and Xinjiang Uygur Autonomous Region of the People's Republic of China to the east and north, and by Myanmar, India, Bhutan and Nepal to the west and south. As a provincial-level ethnic autonomous region, Tibet covers one-eight of China's total area, second only to Xinjiang among all regions in China. Tibet can be access to from main cities in China, such as Chengdu, Beijing, Shanghai, Xining, etc by both train and flight. 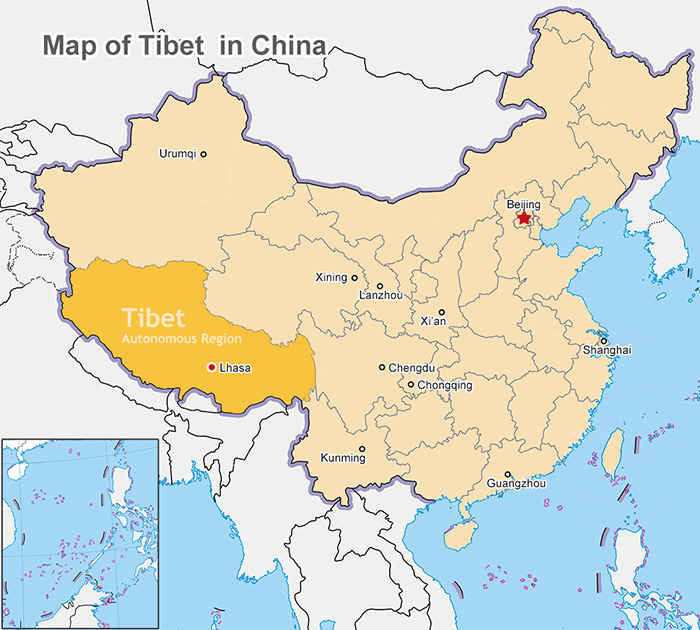 Map shows the location of Tibet in China

Tibet is neighbored to four provinces in mainland China, namely, Xinjiang to the north, Qinghai to the northeast, Sichuan to the east and Yunnan to the southeast. Sichuan province offer the classic overland gateway to Tibet, with the famous Chengdu to Lhasa overland route travelling by bathes of tourists. From Yunnan, it is also the overland route that can lead one to Lhasa, following the Yunnan-Tibet highway.

From Qinghai to Tibet, one usually takes the well-known Qinghai-Tibet train, which starts from Xining. And Xinjiang offers the road route for those who travel to western Tibet directly, to visit Mount Kailash region. 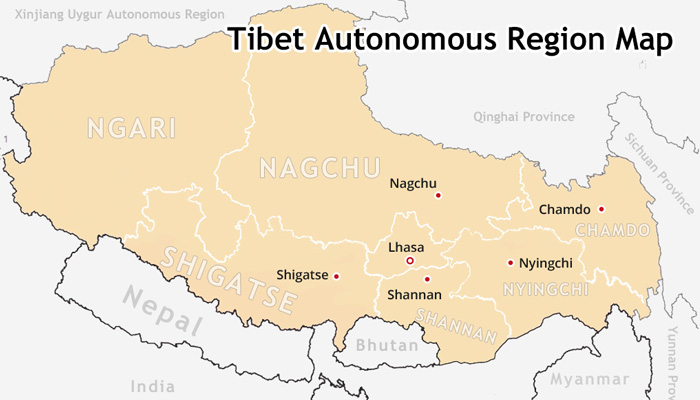 As the capital of Tibet Autonomous Region, Lhasa is located in the center of the region, on the north bank of Lhasa River, a tributary of the Yarlung Tsangpo River. Spanning 277 kilometers from east to west and 202 kilometers from north to south, Lhasa has a total area of 29,518 square kilometers. It is the political, economic, cultural, scientific, and educational center of Tibet, as well as a holy place of Tibetan Buddhism.

There are three districts and 5 counties composed of Lhasa, and the Chengguan District is the main urban area. Most of the cultural attractions gather in downtown, like Potala Palace, Jokhang Temple, Barkhor Street, Sera Monastery, Drepung Monastery etc. The Lhasa Gonggar Airport is located about 85 kilometers to southwest of the downtown.

Shigatse is the second largest prefecture-level city of Tibet Autonomous Region, located in the southwest of the land, east of Lhasa. It covers an area of 179,903 square kilometers, with the municipal government in Sanjuz district. It has a high terrain to the north and south, with the southern Tibetan plateau and the Brahmaputra River basin in between.

From Lhasa to Shigatse, it is a driving distance of 4 hour and 40 minutes, following the national road G318. In Shigatse, one can visit the Tashilhunpo Monastery, and then travel to Everest Base Camp, which is about 354 km away.

Shannan Prefecture is in the southeast of Tibet, sitting in the middle and lower reaches of the Brahmaputra River, south of the Gangdise to Nyenchen Tanglha Mountains. It is bordered by Lhasa to the north, Shigatse to the west, Nyingchi to the east, and India and Bhutan to the south, with a border line of more than 600 kilometers.

Nagqu is located in the northern part of the Tibet Autonomous Region, within the Tanggula Mountains, Nyingchi Tanggula Mountains and the Gangdise Mountains. It is adjacent to Chamdo in the east, Ngari in the west, Lhasa and Nyingchi in the south, and Xinjiang Uygur Autonomous Region and Qinghai Province in the north. With a total area of 369,674 square kilometers, Nagqu is the biggest prefecture-level city in China by land area.

Nagri is situated in the western part of the Tibet Autonomous Region and the northern part of the Tibetan Plateau (Qiangtang Plateau). It is one of the least densely populated regions in the world and has a unique natural landscape of the plateau. It has a land area of 337174.95 square kilometers. The regional administrative office is in the town of Shiquanhe.

The average elevation of Ngari region is over 4500 meters above sea level and it is called "the roof of the roof of the world", "the third pole of the world" and "the forbidden zone of life". The main mountain ranges within the region are the Himalayas, the Gangdise Mountains, the Karakoram Mountains, etc., The main rivers include Shiquan River, Xiangquan River etc., and main lakes include Pangong Tso, Lhanag-tso etc.

Linzhi is in southeastern Tibet, in the middle and lower reaches of the Yarlung Tsangpo River, and is connected to Lhasa and Shannan in its west and southwest respectively. It has the world's deepest canyon, the Yarlung Zangbo Grand Canyon. The region has an average altitude of 3,100 meters above sea level and a land area of 117,000 square kilometers. It is the lowest prefecture in Tibet.

Tibet is a unique land different to many other places in the world. And each part of Tibet region has its own features, in terms of terrains and locations. Travelling to this region may need much to know. If you still have any other question, just contact us for further inquires or leave your message below.

Be the First One to Comment "Tibet Region Map"