Travel Maps of Nepal and Tibet: Your Easy-to-use Maps for a Lifetime Tibet Nepal Tour

Where Tibet and Nepal are - Location Map of Nepal and Tibet

The Republic of Nepal occupies the sky-soaring Himalayas for the most part. The country's neighbors are China in the north and India in the south, west, and east. With Mount Everest (8,848 meters) as the highest point and Kechana Kalan (60 meters) as the lowest, Nepal spans a multitude of climatic zones and natural environments that boast various endemic plant and animal species.

The Autonomous Region of Tibet is a Chinese province, occupying the vast Tibetan Plateau. The plateau is the world's largest and highest plateau, whose average elevation is over 4,500 meters above sea level. Tibet borders Chinese regions of Xinjiang, Qinghai, Sichuan, and Yunnan from northwest to southeast, and India, Nepal, Bhutan, and Myanmar in the south. 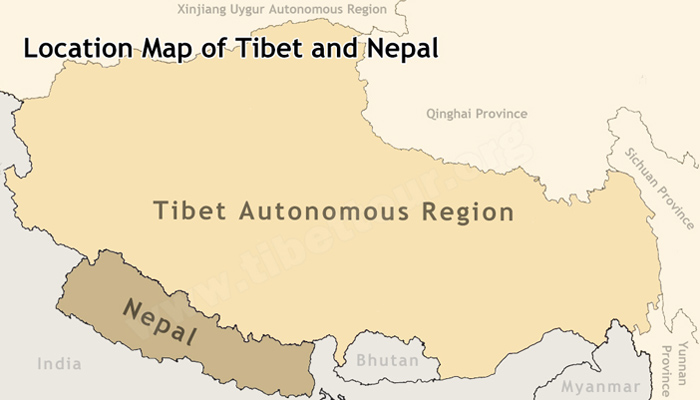 Location Map of Nepal and Tibet

On your Tibet-Nepal tour, you can see many remarkable places. Mountain ranges and passes, scenic lakes, and historical and cultural landmarks are a few of them. Both destinations offer some of the top sightseeing, spiritual and pilgrimage activities in the world. 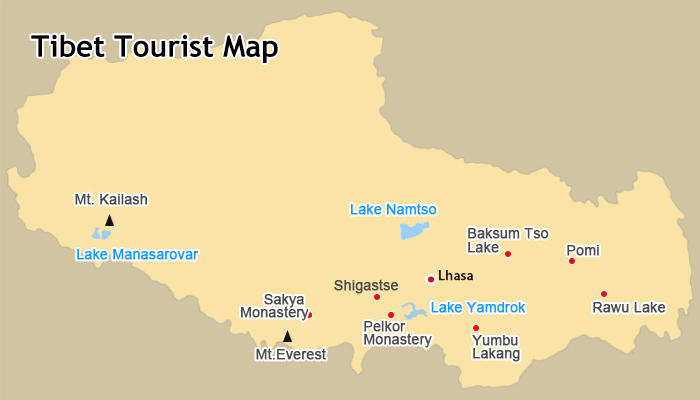 1. Potala Palace is the main landmark of Lhasa, the capital of Tibet. The red and white fortress-like structure dominates the city skyline and has been a residence of Dalai Lamas since the 7th century AD. Massive walls and turrets enclose the complex, which safeguards gilded stupas of Dalai Lamas and features an immense collection of murals, sculptures, and decorative arts.

3. Lake Yamdrok is one of the three sacred lakes in Tibet. Here, monks congregate when the Dalai Lama passes away in search of his soul. Surrounded by mountains and featuring turquoise waters, Yamdrok Lake is a great destination for birdwatching in winter.

4. Mount Kailash is among the most sacred sites in the world. According to legend, each side of the mount features a different material (crystal, ruby, lapis lazuli, and gold), with each corresponding to a different river. Every year, thousands of Tibetan Buddhist, Hindu, Bon, and Jainist pilgrims and foreign travelers take a physically demanding, yet incredibly enriching pilgrimage to Mount Kailash.

5. North Everest Base Camp offers spectacular views of the world's highest mountain from a short distance. From there, the view encompasses brown mountains dominated by snow-covered peaks. More so, you will find the Rongbuk, one of the world's two highest monasteries, in the vicinity of the camp.

7. Barkhor Street in Lhasa is the main commercial artery of the capital of Tibet and the autonomous province. Besides having delicious specialties at the restaurants and browsing local handicrafts and outfit, you can familiarize yourself with the religious spirit of the locals here. 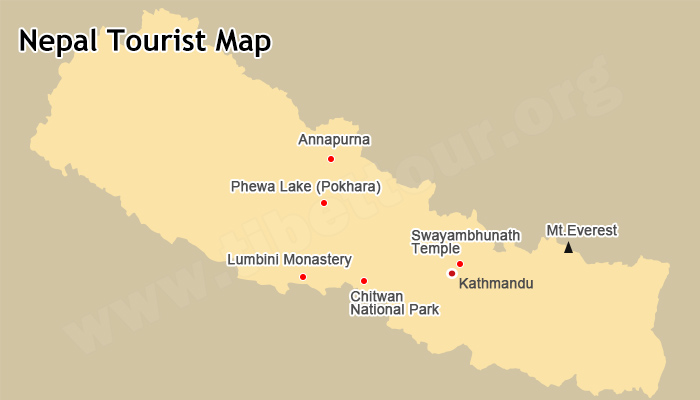 1. Occupying the top of a hill at the outskirts of Kathmandu, the Nepali capital, the Swayambhunath Temple is a four-sided stupa with Buddha eyes painted on each side. Surrounded by monasteries and Buddhist shrines, the Swayambhunath is also famous as the "Monkey Temple" because of the monkey colony inhabiting the hill. 1. Located several kilometers east of Kathmandu, the Boudhanath is among the largest Buddhist stupas in South Asia. The 36-meter tall landmark is the holiest

site for the Tibetan Buddhists in Nepal. Many monasteries surround the Boudhanath, which features all-seeing eyes of Buddha on each side.

2. Annapurna, standing at the 8,091-meter elevation, is the highest peak of a 55-kilometer long Himalayan mountain range. The world's tenth highest mountain is popular among high-altitude trekkers who take the circuit that is up to 230km long. While trekking on the Annapurna mountain range, you will discover a gorge of the Kali Gandaki River, the world's deepest canyon above sea level.

3. Pokhara Phewa Lake is a tranquil place whose calm waters reflect the sky and the mountain ranges of Annapurna and Machhapchhre. The emerald waters of the lake abound with fish, while the dense forest is home to many bird species. A trek through the surrounding hills offers many attractive photo opportunities.

4. Royal Chitwan National Park, flanked by the Churia range, is a gem of nature where you can see many rare wildlife species, such as Bengal Tiger, Gavial (the closest relative to dinosaurs that draws breath) and Indian One-horned Rhinoceros. Take a jeep safari, jungle walk and a boat tour for a comprehensive overview of the NP.

5. The sacred gardens of the Lumbini Monastery are among the holiest places in the world since they are the birthplace of Gautama Buddha. Countless pilgrims come to the monastery to contemplate, practice yoga, and meditate. As a traveler, you should pay special attention to the Mayadevi Temple, standing in the gardens, and the Ashoka Pillar, marking the place of Buddha's birth.

You can travel between Tibet and Nepal by a vehicle, airplane, and train.

Overland Map of Nepal and Tibet 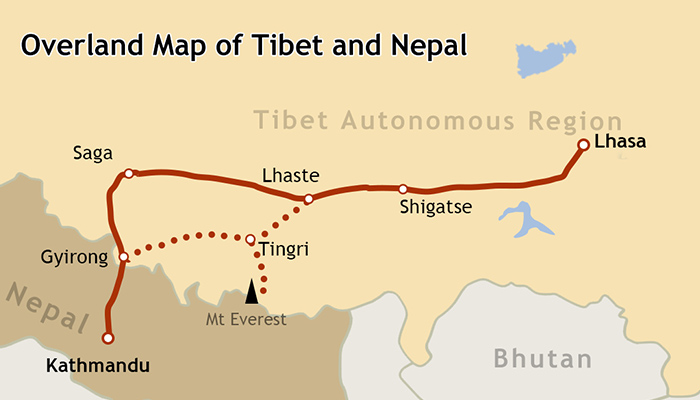 Overland Map of Nepal and Tibet

The 1,000-kilometer long road trip between Lhasa, Tibet, and Kathmandu, Nepal, introduces some top Tibetan and Nepali points of interest. Besides top points of interest of Lhasa and Shigatse, the second largest city in Tibet, travelers get to admire natural wonders such as Yamdrok Lake, Karo la Glacier pass, and Mount Everest. The route gets travelers near the Tashilhunpo Monastery (Shigatse), Potala Palace, Jokhang Temple (Lhasa), Rongbuk Monastery (North Everest Base Camp), Swayambhunath and Boudhanath (Kathmandu). 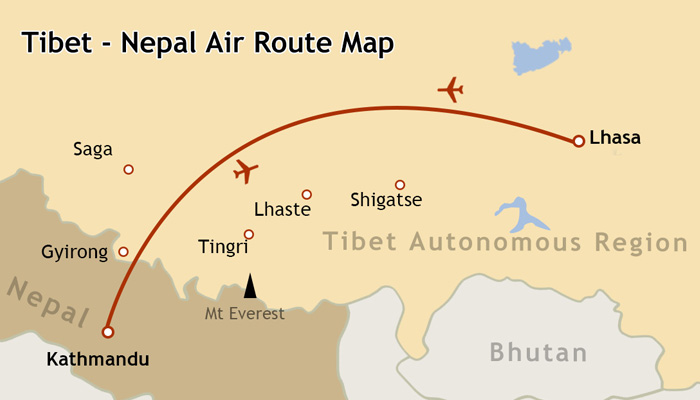 Regular flights are available daily between the capital cities of Nepal and Tibet. Direct flights usually last around 1:30 hours. Note that some carriers fly to Kunming in China, which prolongs the journey for about 30 hours. 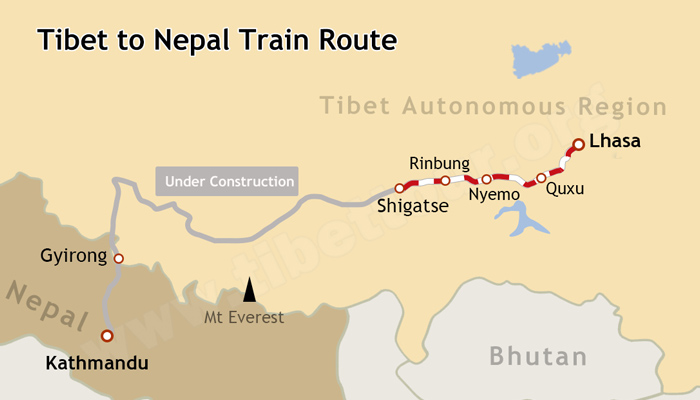 Commuting between Kathmandu to Lhasa by train will be possible in the future. For now, travelers are able to travel by train from Lhasa to Shigatse, and the journey lasts around three hours. There are two daily departures in each direction, while the number of trains may increase in the high tourist season.

The railway section from Shigatse to Gyirong Port, the border crossing between Tibet and Nepal, is currently under construction. Upon achievement of this goal, the construction of the Gyirong-Kathmandu section should begin.

Border Map of Nepal and Tibet 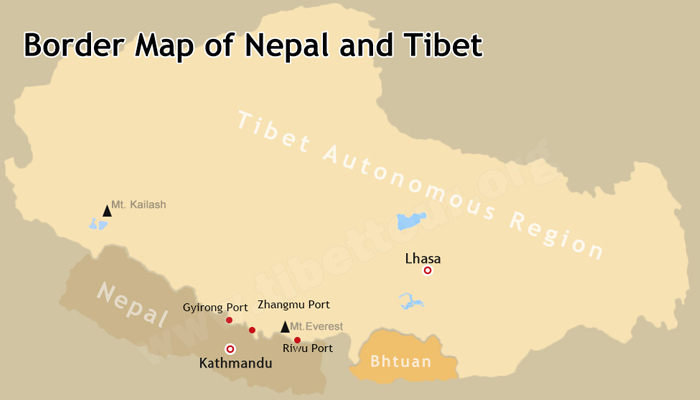 Border Map of Nepal and Tibet

At present, Gyirong Port is the only operational Nepal-Tibet border crossing. Enlarged after a strong earthquake closed Zhangmu Port in 2015, the Gyirong border crossing spans a river, just like Zhangmu, that makes a natural border between Tibet and Nepal. The bridge connecting the two sides is wide and highly functional. To reach Gyirong Port, you need to cover 160km from Kathmandu and 820km from Lhasa. Gyirong Town, some 25km away from the border, has convenient options for an overnight stay, which you should use before continuing your journey.

Tibet and Nepal may appear small in the world map, which may lead you to the conclusion that a complete tour of Nepal and Tibet wouldn't take you more than a few weeks. However, that is far from the truth. In general, you will need more time to cover the distance than the mileage suggests because of the terrain, especially if you travel by a vehicle. Plus, points of interest are beyond count, and there is always something new awaiting just beyond the corner. So, plan a really long tour of Tibet and Nepal or return a few times.

Be the First One to Comment "Travel Maps of Nepal and Tibet: Your Easy-to-use Maps for a Lifetime Tibet Nepal Tour"