When the railway to Tibet from Qinghai Province was planned, it was said by many that it would be impossible to run a train over the mountains to the Tibetan plateau. However, when the famous Qinghai Tibet Railway opened in 2006, it broke all the normal rules of railways, and is an engineering marvel unmatched anywhere else in the world. This outstanding achievement made it possible for tourists to get to the Tibetan plateau by Tibet train, and opened up the Tibet Autonomous Region to tourism in a way that was previously unheard of. The Qinghai Tibet Railway is an extraordinary feat of construction, which has broken more than a dozen railway records around the world.

The Qinghai Tibet Railway is the highest railway line in the world, running at an average altitude of around 4,500 meters above sea level. At its highest point, in the Tanggula Mountains that border the Tibet Autonomous Region (TAR) with Qinghai Province, the railway reaches an elevation of 5,072 meters. This is more than 200 meters higher than the previous record holder, the Peruvian Railway in the Andes Mountains in South America. 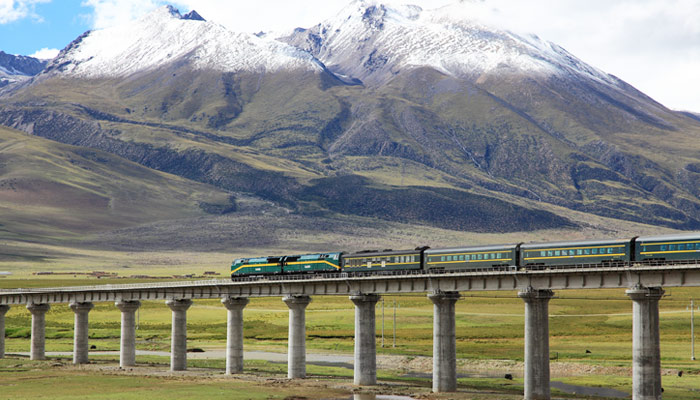 As the world’s highest railway, around 960 kilometers of the 1,956km tracks lie at an elevation above 4,000 meters, and the Tanggula Station, at 5,068 meters above sea level, is the highest railway station on the planet. The tracks rise up from Golmud, to cross the Kunlun and Tanggula Mountains, passing into the TAR and on to Lhasa, the Tibetan capital at 3,656 meters.

The climate on the plateau means that much of the landscape of the northern area of the TAR is permafrost ground, which is frozen solid throughout the year. Around 550 meters of the tracks from Tanggula Station to Lhasa were constructed on this frozen ground, considered previously to be an unstable foundation for a railway line.

The trains to Tibet were designed to run at speeds of around 120 kilometers per hours on normal ground, and around 100 kilometers per hour on the frozen ground of the plateau. The 550km stretch of railway line is the longest track on permafrost anywhere on the planet, and new and unique construction methods were designed to enable the trains to reach speeds of up to 100km/h over this frozen ground.

There is Unrivalled Breathtaking Scenery to Enjoy during the Train Ride

The trains to Tibet are renowned for the outstanding scenery that they pass through on the way to Lhasa, the Tibetan capital. The breathtaking views from the train are unrivalled in the world, and only the trains to Tibet can give you the spectacular views of the landscapes of northern Tibet as you pass through mountain ranges and over vast plains. 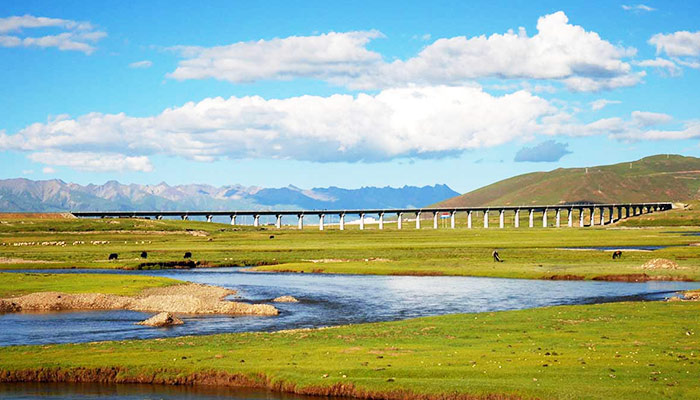 There is unrivalled breathtaking scenery to enjoy during the train ride.

After the trains rise up to the plateau from Golmud, they first cross the Kunlun Mountains, some of the most beautiful mountain landscapes in northwest China. The route passes through the Kunlun Mountain Tunnel, the longest plateau tunnel on the planet, at 1,686 meters long, before heading across the Kekexili National Nature Reserve. One of the most beautiful and remote areas of the plateau, this area of vast open prairie is home to dozens of wild animals, including the rare Tibetan antelope, wild yaks, and the wild kiang.

As the train passes over the Tanggula Mountains, you get some amazing views of this huge range of the Transhimalaya that forms part of the northern boundary of the TAR. The mountains soon drop down onto the vast expanse of the Changtang Grasslands, home to many of the Tibetan nomadic families of Nagqu Prefecture, as well as a wide range of local Tibetan wildlife. As you head south, the train passes amongst the famous Nyenchen Tanglha Mountains, which stretch all the way south to Lhasa.

One of the unique features of the trains to Tibet is the use of oxygen whilst on the train. The trains all have a dual-system for oxygen introduction, which has only been done on these unique trains. The trains have two separate systems, one for pumping oxygen direct into the cars, and one for personal oxygen use.

After departing from Golmud, as the trains make their steep climb to the plateau, the oxygen system is started, and oxygen is piped into all of the train’s cars, increasing the oxygen content of the normal air at higher altitudes. This is done to help prevent altitude sickness while traveling on the trains, as the steep climb to over 4,000 meters can cause altitude sickness in almost all travelers. The oxygen content inside the cars is roughly equal to that of the air at normal sea level.

However, there are still instances of altitude sickness, despite the oxygen system, and personal outlets are also found all over the train. The outlets are located in all cars and cabins for each berth, under all of the seats in the hard seating compartments, and in all corridors. Oxygen tubes for personal use are available free from the staff of the trains, and can be used for those suffering from altitude sickness as a temporary relief from more severe symptoms.

The trains to Tibet have three classes of tickets, and the first-class soft sleeper cabins are often the most popular choice for international travelers. Each cabin has four berths over two levels, with TV, luggage storage, and a lockable door.

The berths in the soft sleeper cabins are comfortable and spacious, with ample length and headroom for both upper and lower berths. These comfortable beds make traveling on the trains to Tibet much more pleasant an experience, and leave you refreshed and ready to explore the Tibetan plateau when you reach Lhasa.

All of the cars on the Qinghai Tibet Trains have modern clean facilities for passengers. The trains also boast a complete dining car experience, which makes the trip even more special. The dining car is normally located between the first and second class cars, and can normally seat around 40-50 passengers at a time. The comfortable seats, large tables, and big windows make dining while traveling a unique experience. The dining car offers breakfast, lunch, and dinner, as well as drinks and snacks at other times, and has a wide range of freshly-cooked Tibetan and Chinese dishes to choose from. 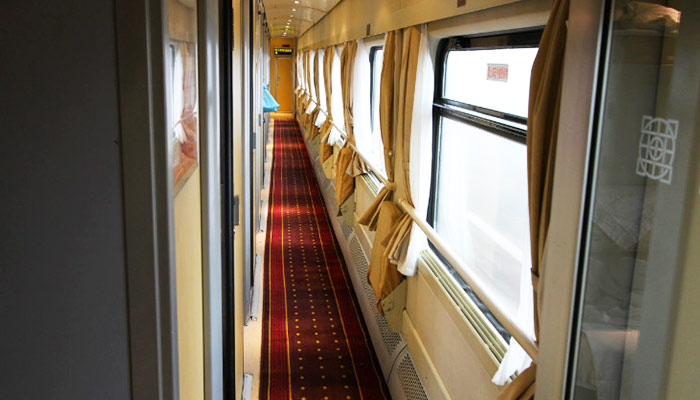 In each passenger car there are toilet and washing facilities, as well as hot water. The toilets in the cars are found at each end, and have a western-style toilet on one side and an Asian squat toilet on the other side. The ends of the cars also have facilities for washing, with three sinks that have hot and cold water, as well as soap dispensers. Hot water for coffee, tea, and pot snacks is also available at both ends of each car, through a wall-dispenser, and is always boiling hot. This makes it easier to bring your own tea and coffee for drinks on the train, as well as being useful to make up snacks such as pot noodles and packet meals.

The whole experience of traveling on the trains to Tibet is made better with the availability of these unique features, which you often do not find on most other trains in China. The inclusion of western-style toilets is unique on the Tibet trains, as there are thousands of international travelers using the trains every year, many of which are not comfortable or experienced in using Asian-style toilets.

The trains also have huge windows in the corridors in all soft and hard sleeper cabin cars, as well as fold-down seats so that you can sit in the corridors and watch the stunning Tibetan plateau landscape pass by outside. These huge windows make the views better, and give you the chance to see more of the plateau than most travelers to Tibet by flight will ever get to see. Overall, the experience of traveling by train to Tibet is one of comfort, pleasure, and leisure, and is unbeatable anywhere else in the world for its views and facilities.

For many people planning a trip to Tibet, flying is often the first choice. However, with the comfort and pleasant atmosphere of the Tibet trains, as well as the complete facilities available for all passengers, travel to Tibet by train has become much more popular. The spectacular views of the two vast mountain ranges, the many open stretches of plains and prairies, and the outstanding views of the Tibetan wildlife make traveling by train a wholly unique experience, and one that will stay in your memories forever. So if you are planning a trip to Tibet, why not take the trains along the Qinghai Tibet Railway, and make the most of your lifetime trip to the Roof of the World.