As it runs on the world's highest railway, the famous Qinghai-Tibet Railway, the trains to Tibet are tailor-made according to the special elevation, temperature and other specific situations along the railroad to Lhasa. The totally-closed Tibet train is equipped with air-conditioning, supercharging system, oxygen supply, and altitude display, as well as other advanced facilities. Therefore, passengers can enjoy their trip to Tibet throughout the entire train ride. 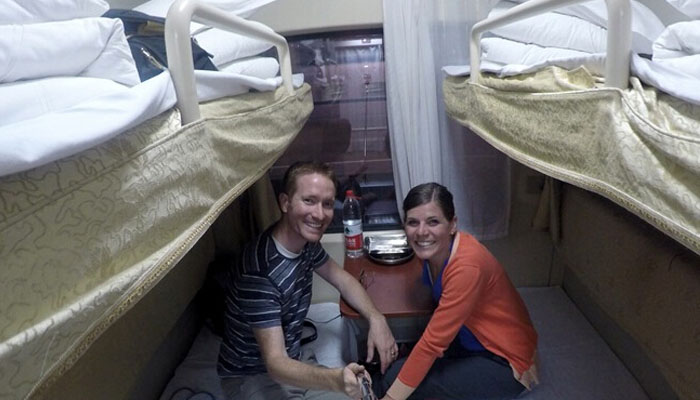 There are two kinds of sleeper cabins on the trains to Tibet.

The soft sleeper is the more comfortable choice for travelers on the trains to Tibet. It includes four comfortable berths over two levels, plenty of luggage space, TVs in all berths showing local programs and films, a central table under the window, and a lockable door for added security. The lower berths are more expensive than the upper berths, and if you are likely to spend time sleeping or resting during the day, the upper berths are the better option. On trains in China, the lower berths are often used by all the passengers in the cabin for sitting and chatting during the day.

The Hard Sleeper cabins are just as comfortable as the Soft Sleepers. But without the lockable door for added security, there is only a curtain for a modicum of privacy from the corridor of the carriage. Hard Sleeper cabins have six berths over three levels, with the lower berth being the most expensive and the upper berth being the cheaper option. As with the Soft Sleeper, passengers often use the lower berths for sitting on during the day, so the middle and upper berths are often the better option for getting plenty of rest on the trip.

Luggage on the trains to Tibet is specific in the size and weight, and should meet the dimensions required by the ticket class. The Soft Sleeper cabins have more luggage space than Hard Sleeper cabins, with luggage space above the door at the end of the upper berths and plenty of space below the lower berths. You can also keep personal items, including cellphones and other gadgets, on the berth with you, and should keep them with you at all times. 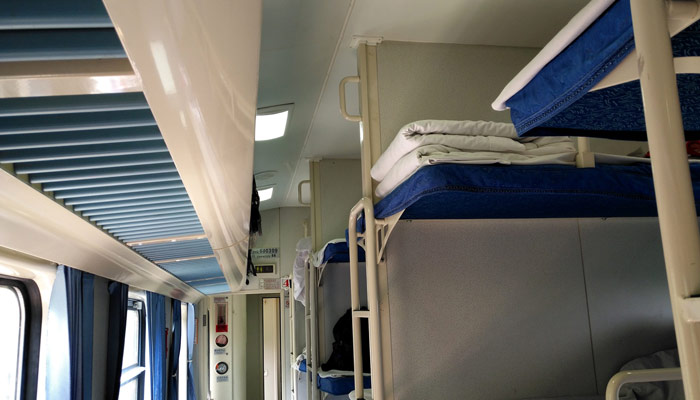 The luggage rack is above the window on the side of the aisle.

The Hard Sleeper cabins have less options or luggage space, with no luggage space above a door, as in the Soft Sleepers. And with five other people sharing the cabin, you will have even less space for your luggage. There is limited space beneath the lower berths for storage of luggage, and there is also limited space in the luggage rack in the corridor opposite your cabin. If you are traveling in the Hard sleeper cabins, then you should think about how much luggage you are bringing with you.

Every train to Tibet has a dining car that can comfortably accommodate up to 40-50 people. The dining car is normally found in the middle of the train, between the hard seat and soft sleeper carriages, and has a full kitchen for preparing fresh meals along the journey to Tibet. Each of the tables in the dining car are laid out beside the large windows on either side of the carriage, and seat four people at each table. With wide bright windows, it is the ideal place to watch the stunning Tibetan countryside pass by as you enjoy your meals. 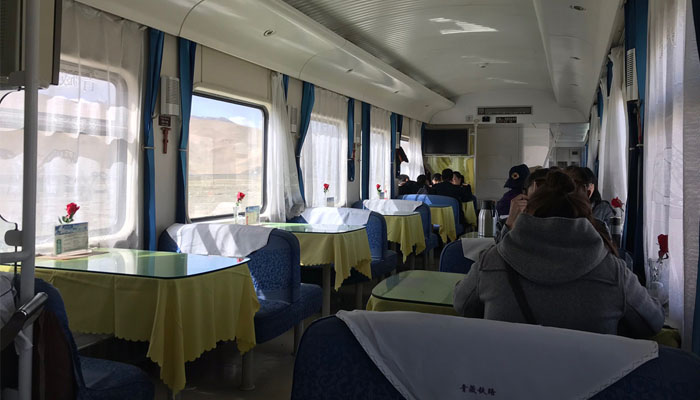 The dining car on Tibet trains is between the hard seat and soft sleeper carriages.

Meals on the trains to Tibet usually consist of a variety of Chinese and Tibetan dishes, which are very healthy and nutritious, and are good staples for the trip to Tibet. You can choose from a wide variety of dishes or go for the set meals, all of which include such delicious dishes as Kung Pao Chicken, Red Braised Pork Belly (or Hong Shao Rou), Twice-Cooked Pork, and many others. All the dishes are freshly cooked to order, and can vary from season to season, depending on available ingredients. The meals are also a little more expensive than in most cities across China, but are not too expensive.

All of the trains to Tibet have dual oxygen supply systems to make it easier for travel along the high-altitude plateau, where the air is thinner than at sea level. The use of oxygen is designed to help tourists to reduce the risk of getting altitude sickness while traveling on the train. However, this does not mean you will not get any altitude sickness, and it largely depends on the individual. 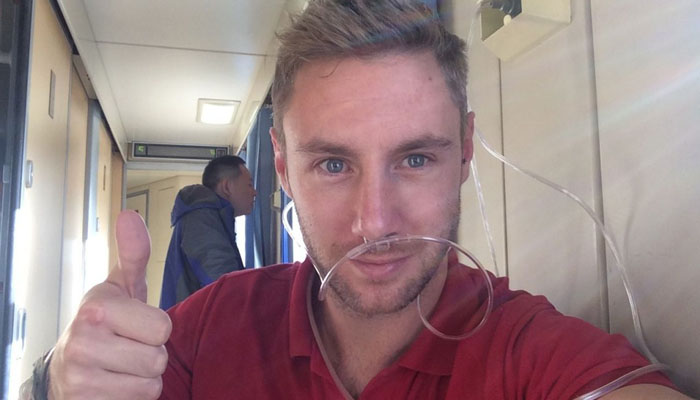 The disposable tubes to passengers usually free to use.

The main oxygen system pumps oxygen direct into all the carriages after the train departs from Golmud, where it begins the climb up to the higher altitudes of the plateau. The system delivers oxygen as an addition to the normal air in the carriages, to bring the air pressure and oxygen levels inside the train up to levels closer to or a little higher than those at sea level. For most people, this is enough to stave off altitude sickness while you are traveling, though you will be subject to its effects once you arrive in Lhasa and disembark.

The secondary oxygen system is a personal delivery system. This allows tourists who are feeling the effects of altitude sickness to obtain some relief from the symptoms by using personal oxygen breather tubes. The tubes are available from the train staff, and can be plugged into oxygen outlets throughout the train. The outlets are located in each berth space in the soft and hard sleeper cabins, as well as in the corridors by the large sightseeing windows.

If you are suffering from altitude sickness during the train journey, you can speak to the staff and the medical team, who will provide you with a personal oxygen breathing tube that you can wear under your nose to allow you a higher level of oxygen for the trip. However, these should not be used 24 hours a day, and if symptoms persist, you should speak to the medical staff again.

While the trip to Tibet on the trains is not as long and arduous as you might expect, with all the modern facilities that you can utilize during the journey, it is essential to be able to wash up and use the toilet on the trains. All trains to Tibet have two types of toilets, one on each side of the carriage at both ends. On one side you have the typical Asian-style squat toilet, which can be found all over China and is the norm for most public toilets across the vast country. On the other side you can find a western-style toilet, complete with toilet bowl and seat, for those that are not comfortable using the squat toilets. Each toilet has a small sink for hand washing, and flush or tap for flushing the toilet after use. Each carriage also has a larger disabled access toilet with emergency button, which can easily fit a full-sized wheelchair, for those travelers that have disabilities.

Washing area consists of a row of three wash basins.

Outside the toilets, at both ends of every carriage, is the washing area, which consists of a row of three wash basins that can be used for washing your hands and face during the trip. Running water from the faucets is only at room temperature, which can be a little cold at certain times of the year, and each individual sink is fitted with a soap dispenser, mirror, and the entire area is well lit. However, please be reminded that the water from the faucets is not drinkable, and you should use bottled water for brushing your teeth.

Drinking water is available in the dining car and from the trolleys that run along the length of the train as bottled water, which you can buy for a small cost. Alternatively, you also have readily available boiled water that you can use for free, which is available in every carriage on the train. The boiled water dispensers can be found at each end of every carriage on the train, and dispense boiling hot water throughout the entire trip. 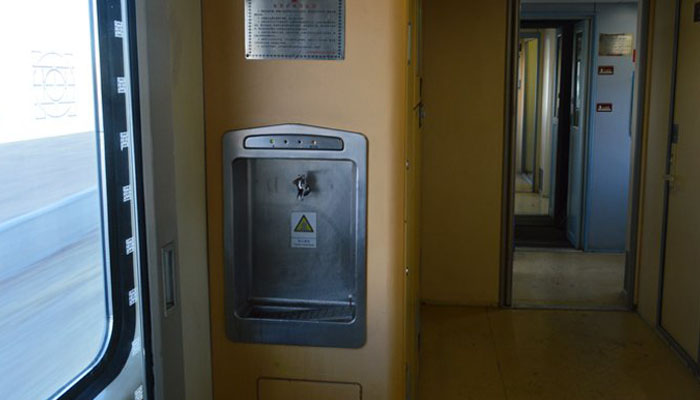 The water dispensers can be found at each end of every carriage on the Tibet train.

You will need to provide your own cups or containers to dispense the boiling water into, and it is not permitted to use thin plastic bottles, only plastic containers that are designed to handle boiling water. The water is drinkable, and can be used for making snacks from instant meals and pot noodles, which you can buy on the train or bring with you, as well as being ideal for making tea and coffee on the trip. 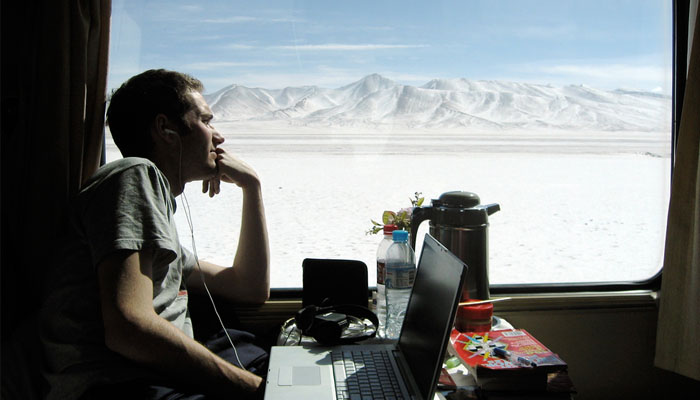 You can charge your electronic equipments at the electrical outlets on the Tibet train.

There are two main outlet types in China, and both can be found in each socket on the trains to Tibet. The easier option is the flat twin-blade plug type, which is commonly used throughout Asia, as well as in the United States, Canada, and Mexico, and is known as the Type “A” plug. The second type of socket used on the trains is the Type “I” plug, which has two oblique flat pins and a flat earth, and is commonly used in Australia, New Zealand, and Argentina, among other places. Both sockets use 200-220 volts, so if your gadgets use 100-110 volts, then you should not plug them direct to the sockets, and should use an approved voltage capacitor. Adaptors for the plugs to adapt your own gadgets to the local plug socket types can be found in most DIY and hardware stores around the world.

Traveling on the trains to Tibet is an exciting adventure that gives you a wonderful experience, especially when traveling through the spectacular landscapes of the Tibetan plateau. The facilities on the trains are modern and up to date, and each car is well equipped with all the things you will need to make your epic adventure a comfortable and pleasant one.

Be the First One to Comment "Public Facilities on Tibet Trains"