Why Travel Tibet by Train? Reasons to Take a Tibet Train to Lhasa

Compared to other modes of traveling to Tibet like flight or road, the train is the most interesting and memorable way to go to Tibet. The Qinghai-Tibet Train is not only a means of transportation to Tibet but also a way to visit Tibet and experience Tibet. Passengers can experience the Tibetan countryside, beautiful scenery, and feel the local life at stations and along the railway.

Experience Qinghai-Tibet Railway - The Engineering Marvel of the World

1. The Qinghai-Tibet Railway is called “the world’s highest railway”: 86% of the line is above 4000m and the highest point is 5,072 meters. It overtook the previous highest railway line, the Lima-Huancayo Railway in Peru.
2. The Qinghai-Tibet Railway is also the longest plateau railway in the world: extending 1,956 kilometers from Xining, capital of Qinghai Province, to Lhasa, Tibet Autonomous Region.
3. About 550 kilometers of this railway is laid on frozen earth, the longest in any of the world's plateau railways.
4. Tanggula Mountain Station, 5,072 meters above sea level, is the highest railway station in the world.
5. Fenghuoshan Tunnel, 4,905 meters above sea level, is the world's highest tunnel on frozen earth.
6. Kunlun Mountain Tunnel, running 1,686 meters, is the world's longest plateau tunnel built on frozen earth.
7. Amdo Construction Site, 4,704 meters above sea level, is the world’s highest construction site.
8. The maximum train speed is designed to reach 100 km per hour in the frozen earth areas and 120 km per hour on non-frozen earth.

Appreciate the Stunning Scenery on the Train to Tibet

The Qinghai-Tibet Train traverses mountain ranges, rivers, grasslands, and passes by glacier and lakes. The scenery along the railway is as majestic and breathtaking as a painting. There are a large number of sights along the line of the Qinghai Tibet Train.

Qinghai Lake, the largest saltwater lake in China, is a paradise for a huge variety of local and migrant birds. The train passes by the north shore of Qinghai Lake, and you can see a large area of clear water and reflections of distant snowcapped mountains. Every summer, Qinghai Lake is surrounded by Cole flowers in full bloom. The blue sky and golden yellow rapeseed fields constitute a beautiful landscape painting. The Qinghai-Tibet train will run for about half an hour along the north side of Qinghai Lake, and there is plenty of time for viewing. 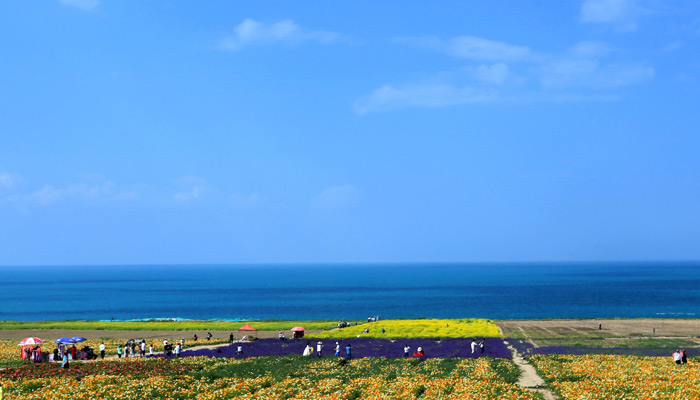 Tibet Train passes the Qinghai Lake during its ride.

Yuzhu Peak, 4,159 meters above sea level, stands about 170 kilometers southwest of Golmud, which is the main peak of the Kunlun Mountains. Around it, there are 15 snow-capped mountains above 5,000 meters above sea level, standing from east to west. From a distance, it looks like a jade dragon taking off. The perpetual glaciers and snow on the top of the mountain have created a beautiful landscape of "Kunlun June Snow". 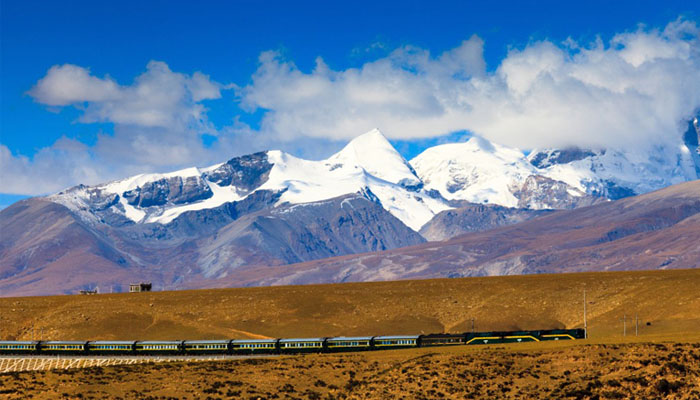 Yuzhu Peak along the Qinghai-Tibet Railway

Hoh Xil is the largest nature reserve in China, located in the west of Yushu Tibetan Autonomous Prefecture in Qinghai Province, with a total area of 4.5 million hectares. It is home to many species of rare and endangered species, such as the Tibetan Antelope, the wild yak, and the wild donkey, etc. If lucky, passengers may see them.

The Tanggula Mountain Range is located at the junction of Qinghai Province and the Tibet Autonomous Region in China. It is the highest altitude area that the Qinghai-Tibet Railway passes through. The world’s highest railway station, Tanggula Station, is located here. It is known as “the closest place to heaven”. Looking westward from the station, you can see the majestic appearance of the main peak of Tanggula Mountain.

Cuona Lake lies in 20 kilometers southwest of Amdo County. It is regarded as the highest altitude freshwater lake in the world. Cuona Lake is also a holy lake for the Tibetan people. The water here is crystal clear, reflects the blue sky and the white clouds. The lake is rich in products, attracting national key protected wild animals such as black-necked cranes, swans, etc. The train’s rail is only 20 meters away from the lake, so travelers can get a fantastic view of this majestic alpine lake from the train. 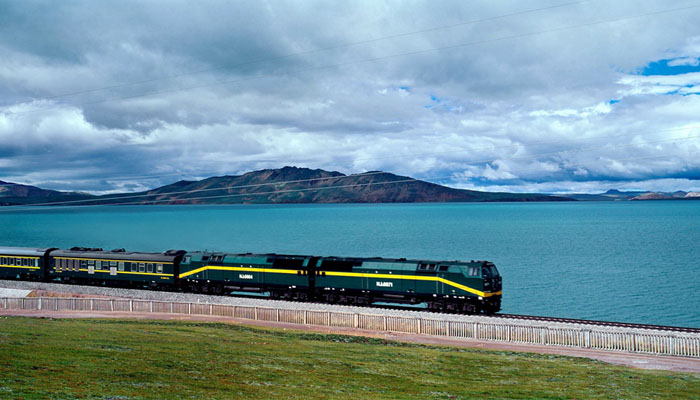 The train to Tibet passes Cuona Lake before arriving in Lhasa.

The Qinghai-Tibet Train is also called Lhasa express train. The Lhasa express train engines, built-in Pennsylvania by the American company, General Electric, have been specially designed. It shows great traction, brake power to adapted to run well on the high-altitude of the plateau.

The carriages, mostly manufactured by Canada's Bombardier Inc., are specially designed to carry passengers in an oxygen-deficient atmosphere and are more commodious than other regular Chinese trains.

These specially designed trains are installed with double-paned windows and UV filters to protect passengers from ultraviolet rays. An advanced thunder-prevention system is also installed in each train to guarantee the safety of the trains running on the plateau.

The traditional wastes processing method can cause severe damage to Tibetan fragile and original natural environments. So all the Tibet trains are installed with environment-friendly toilets, wastewater deposit tanks and garbage treatment facilities to protect environments along the railroad.

There are two kinds of oxygen supply systems on Tibet trains to help tourists get a lesser risk of altitude sickness. One is a 'dispersion-mode' oxygen supply system, which can convey oxygen to carriage through the air-conditioning system. The other is an independent system, which is directly used by passengers through the independent port. Passengers can connect the disposable pipe to an individual oxygen outlet when they get a headache, feel out of breath or meet any other difficulties of traveling on such a high altitude. 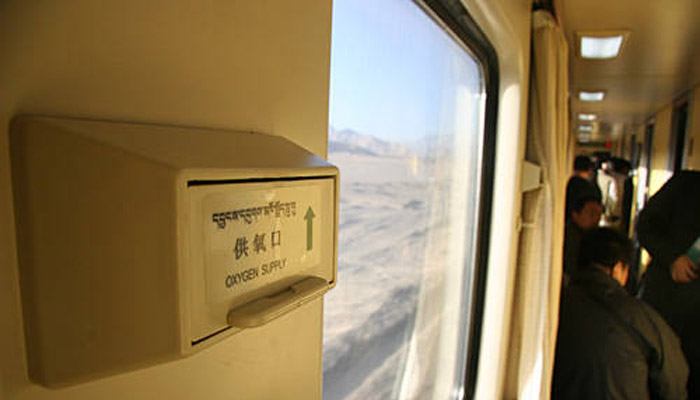 Oxygen outlet to ensure your safety onboard Tibet Trains

Cut Down Your Tibet Tour Cost with Tibet Train Travel

If you have enough time, traveling to Tibet by train is more economical than taking a plane. The price of the train ticket from the Chinese cities, even from Guangzhou – the most remote city, to Lhasa, Tibet, is significantly lower than the airline fare. Even during the high season, when the prices of train tickets increase, you are highly unlikely to pay as much for the train as for the flight to Tibet.

There are two ways to get a Tibet train ticket. You can go directly to the railway station of your departure city or book Tibet train tickets online. There are 7 cities in mainland China offering trains to Tibet, including Beijing, Shanghai, Guangzhou, Chongqing, Chengdu, Lanzhou, and Xining. It should be noted that the train ticket is always in huge demand with limited supply. It is better to book at least one month in advance, especially during peak tourism months.

As a better choice, we can help to get your Tibet train ticket and the required Tibet Travel Permit as long as you book your Tibet tour with us. Our years of Tibet tourism experience can let you enjoy a worry-free Tibet train journey.

As a Tibet tour expert with over 10 years of Tibet tour running experience, we promise you a seamless Tibet train tour with tourist-friendly service, including Tibet train tickets booking and Tibet Travel Permit application. You can check out all our classic Tibet train tour packages, starting from Beijing, Shanghai, Chengdu, Xining, Xian, etc. And you can also contact our Tibet travel guru to tailor-make your own Tibet train journey.

Traveling to Tibet by train is one of the popular options for tourists. While traveling along the world’s highest railway, you can appreciate the stunning landscape of the Tibetan plateau from the windows and experience a special Tibet train journey onboard the special designed Lhasa express train.

Be the First One to Comment "Why Travel Tibet by Train? Reasons to Take a Tibet Train to Lhasa"